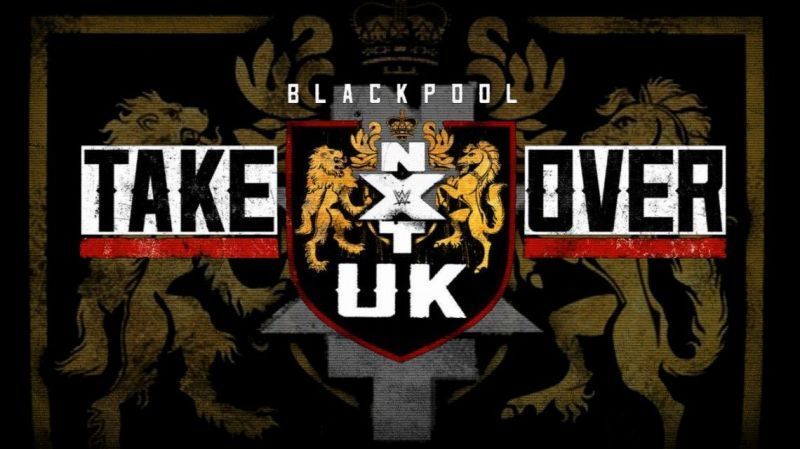 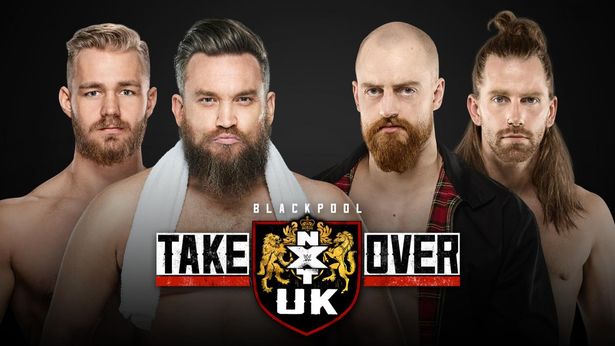 — NXT UK Tag Team Championship: Moustache Mountain vs. Grizzled Young Veterans – We kick off the first ever NXT UK TakeOver show with two teams entirely familiar with each other; MM and the GYV have been rivals in PROGRESS for quite some time. Since Zack Gibson has blown up as one of the stronger heels in the NXT UK brand, winning the last WWE UK Tournament (and subsequently losing to Pete Dunne for the title), he’s been joined by his oft tag partner, Drake, who — like Bate to Seven –provides the athleticism to Gibson’s gruff brawling style. There were several highlights in the year’s best tag match (it’s been only 12-days, but this is easily the most must-see tag of 2019), including Bate simutaneously airplane-spinning both Grizzled Young Vets! Moustache Mountain also paid homage to the British Bulldogs with similar style tights and a running powerslam into the flying headbutt spot. Awesome. This one came down to so many false finishes.. an exciting moment also had both Bate and Seven caught up in synchronized Shanley Gates, which eventually saw Bate fireman carry Drake onto Gibson and Seven to break up the submission. Another had Bate caught on Gibson’s shoulders outside the ring, which led to a ridiculous tope from Drake. A Tope Doomsday Device? Yes, I’ve never said that before. The GYV eventually get Seven in the Ticket to Mayem (a Tombstone-alley-Codebreaker). A truly amazing match! – 4.75/5 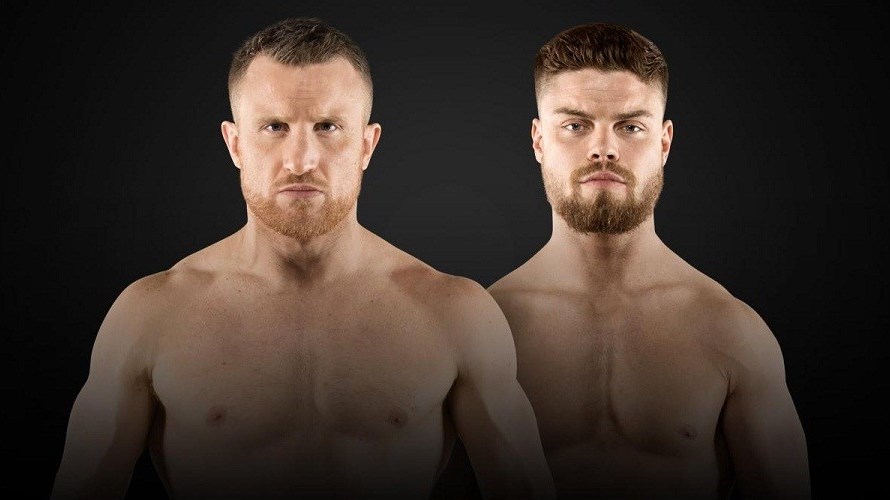 Finn Balor vs. Jordan Devlin: I was thinking.. “How the fuck are they gonna top this? Why do the keep putting these amazing NXT tag team title matches on first?” Then our prayers were answered. No, not Travis “Fucking” Banks going down with an injury–because he’s quite the hand in the squared circle; but, an ultimate surprise: the return of Finn Balor to NXT. OK, so it’s NXT UK, but having Prince Devitt face his former student Prince Devlin is something I hadn’t imagined would happen so soon. Balor came out blazing, looking as refreshed in this match as he had in some time (actually, in the past couple weeks Balor has looked his WWE best). I still think Finn took a little too much heat from Jordan, getting pounded quite a bit when he’s supposed to be a WWE superstar. Nonetheless, the crowd was still into the match, which was well-wrestled and had some great Pelé kick and double stomp exchanges. Devlin mirrored and mocked his coach throughout the 11-minutes. Eventually, the elder irishman would win with his signature 1916, shotgun dropkick and Coup de Grâce. Despite the loss, Devlin still came out looking like a big time heel and is sure to get booed to smithereans when the match with Banks becomes a reality. 3.75/5 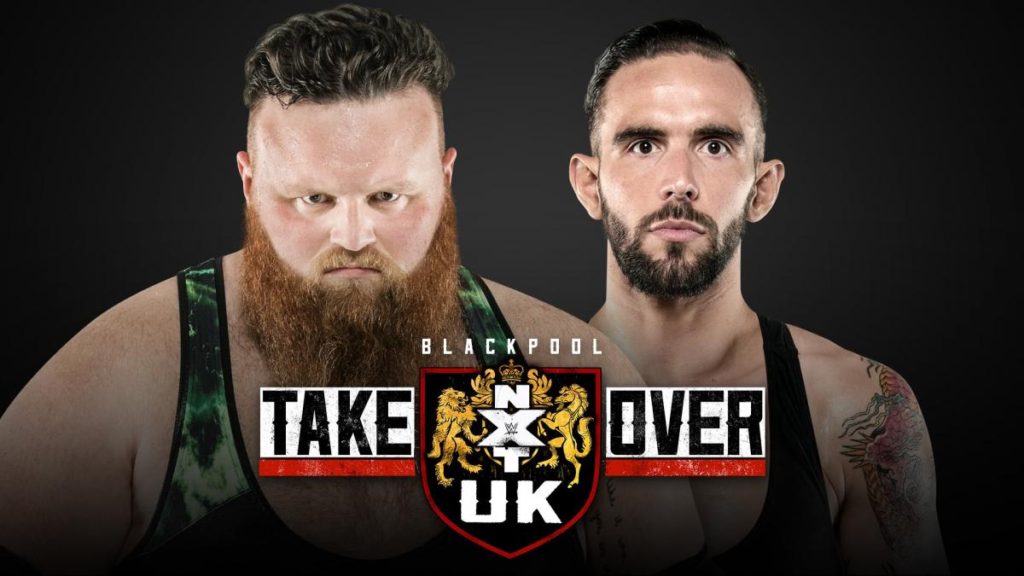 No Disqualification: Dave Mastiff vs. Eddie Dennis – A much-needed change of pace match coming off the two NX-plosion to begin the show. Had Mastiff and Dennis had a regular match, it would’ve been a bathroom break. Thankfully these two animals excel in matches like this, and there were some mighty showcases of power from the ultra lanky Dennis– one spot saw Dennis catch Mastiff’s crossbody into a Bossman Slam onto the Ring Entrance Steps, and another found the 300-pounder into the clutches of Dennis’ Razor’s Edge/Severn Bridge! Insane. After some back and forth outside brawling, kendo shots and table teases, Mastiff hits a German and wild K.O. cannonball into Dennis through a table. The 10-minute time limit was welcome. – 3.25/5 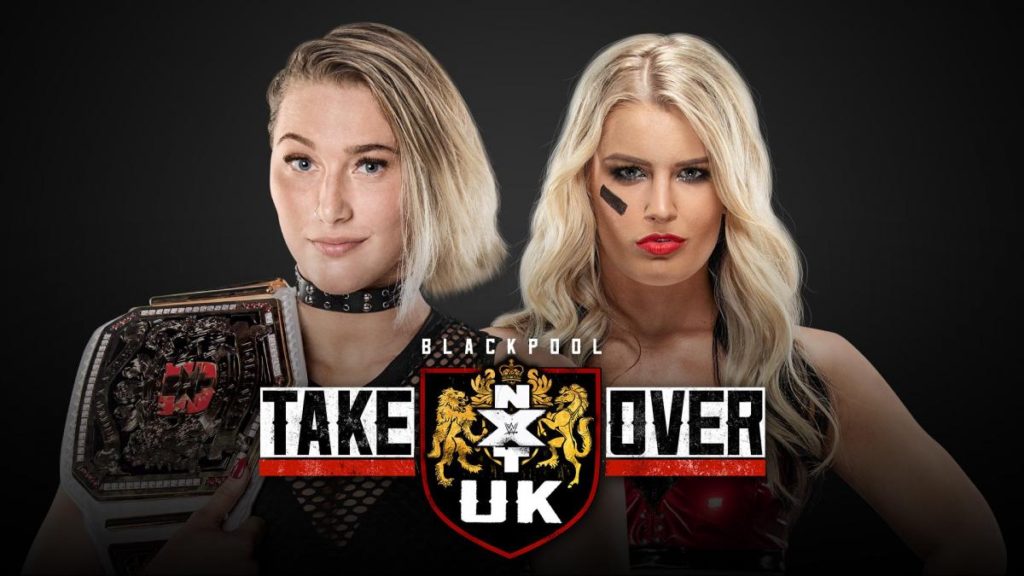 NXT UK Women’s Championship: Rhea Ripley vs. Toni Storm – I always feel like NXT Women’s Title matches should open up these shows to get the most buzz, but Ripley and Storm had a very good match despite “the death spot”. Much like some of the Shayna Baszler/Ember Moon matches from early last year, this one was highly submission based. Both women, especially Ripley work great from the ground but this type of match can chill the crowd a bit. By the way, tonight’s crowd in Blackpool’s Empress Ballroom was super lit. They supported the babyfaces and booed the heels. TakeOver: Blackpool came off how pro wrestling should; everything felt important, and both Vic Joseph and Nigel McGuiness were top-notch calling the action. Getting back to the match, this was all about the Storm Zero and the Riptide and who’d be the one to time their finisher at the right moment. Both proved too worthy to fall for just one, and eventually Storm would reverse Ripley’s finisher into her own. Awesome stuff and I wouldn’t mind seeing a 2-outta-3 falls rematch on NXT UK TV. 3.75/5 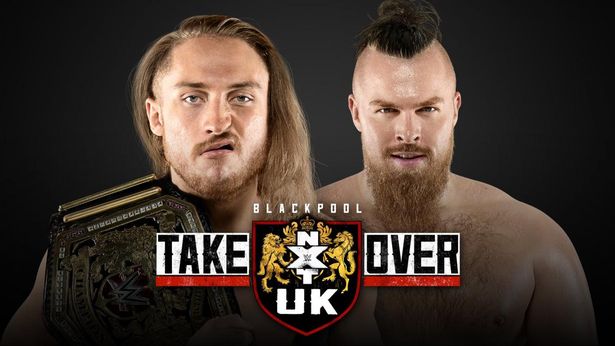 WWE United Kingdom Championship: Pete Dunne vs. Joe Coffey – Just how in the hell would this crowd react after everything they’ve seen so far? Not much. At least from the get, this one slowly rolled.. as a lot of dull boo’s were aimed at Coffey from this super pro-Bruiserweight crowd. But that wound up a good thing. There was a long feeling-out process, with Dunne trying to work the fingers of Coffey (remember that) and Coffey pounding the back of Dunne (remember that). What deemed a slow and plodding, almost rest-holdish affair turned out to be a supremely brilliant match layout, as Dunne would suffer constant bearhugs, hard powerslams, powerbombs and suplexes. It was like a great TV show or movie that brilliantly echoed everything that would happen at the end. The crowd really got into the match when Dunne hit a moonsault to the outside, and Big Joe would eventually hit or attempt a pair of impressive dives of his own. Second gear would come with Coffey kicking out of the first Bitter-End, and hitting Dunne with an apron Liger Bomb just seconds later. Ho-lee Shit. Both Dunne and Coffey had a pair of tenacious exchanges, as heavy brawling and some outstanding lariat/enzuigiri spots/reversals really got the crowd ramped up. Even a pair of tope rope Bitter End attempts failed horribly and didn’t exactly ruin the match. It was amazing how poor and dangerous these spots were, yet the crowd was still chanting “This is Awesome” and “Mama Mia”. But for almost killing themselves twice, I have to detract from the overall score of the match. Dunne would eventually hit a third Bitter End that Coffey still kicked out of, but the finger-focus becomes the story when Dunne’s bend finger/triangle submission gets the victory. Despite an early drag and some dangerous mistakes, this UK Championship main event was still one hell of an epic affair. 4.25/5

This was a crazy great show. While having the advantage of a 5-match show (we’ll see the rest on NXT UK TV I’m sure), I thought TakeOver: Blackpool was as good if not better than Wrestle Kingdom 13. Even the worst match — a rock solid 3.25/5 hardcore brawl — would’ve been a solid entry on that show. As is the case with most TakeOvers, there was no filler and was bookended by two amazing matches. There are people out there who will like this main event more than yours truly and perhaps even more than the Tokyo Dome main event. While I don’t think Dunne/Coffey can touch the 5.5-Bible Omega/Tanahashi (except with time, this one felt about 40+ although it was just a shade under 34-minutes), it was still a great main event and will be one of the best singles WWE contests we have all year. That said, mothafuckin’ WALTER IS HERE and this mark couldn’t be more thrilled for what’s to come. That music gave me chills! So we kick off 2019 with a show with 5 matches good-to-great and two big time surprises? Damn, that’s a hell of a start for this NXT UK brand. 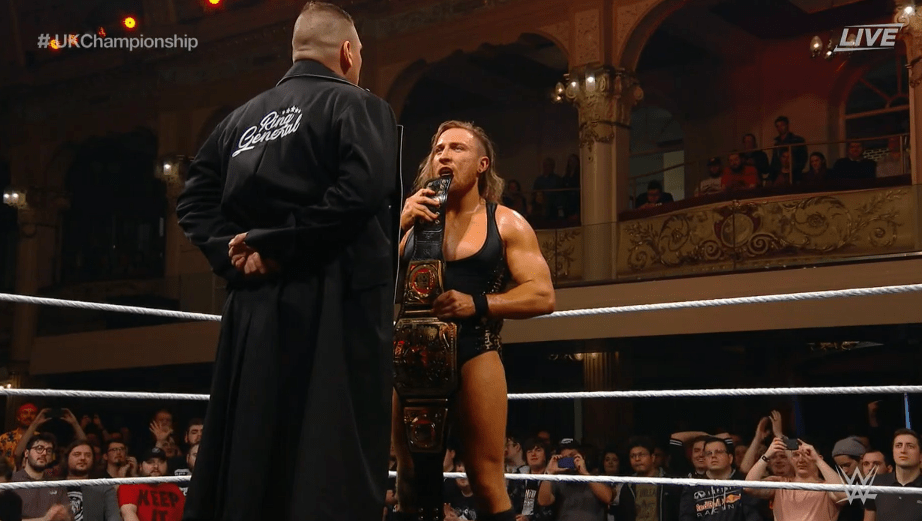