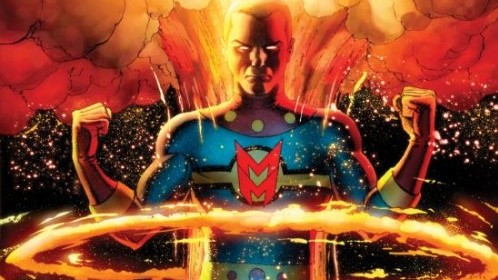 Due to the cancellation of the FOX Studios “Movie Panel” at this past Saturday’s New York Comic Con — which would have showcased the new X-Men film, Days of Future Past (and the terrific-looking Dawn of the Planet of the Apes) — a panel deemed worthy enough was needed to help share the spotlight with Arkham Origins.

Sure, the “Company That Stan Ran” still declined many fans inquiries into the future of the company; again spreading many of their answers thin across an assortment of panels (i.e. making their biggest comic book-related announcements earlier in the evening, rather than recapping or saving these ideas for what has traditionally been their biggest non-movie Con panel). Some could even claim this fall’s particular “Cup o’ Joe” was all over the place, with news ranging from another digital title from their Infinite line, the unexpected return of a Zombie Legend, and a major announcement concerning a cirque du soleil-inspired tour titled Marvel Live!

Even with all that, it still took a “Miracleman” to shoot this panel to the top. That Miracleman is Mr. Neil Gaiman, and his lost material on the former Warrior Magazine-Marvelman-turned-Eclipe Comics-Miracleman is returning to print this January.

What the return of Miracleman means to the industry… is that some of Neil Gaiman‘s work can return to life. Seeing how the revered author had been forming a nice relationship with Marvel since the announcement of the writer’s Angela character waltzing into the pages of Brian Michael Bendis’ Guardians of the Galaxy (from the pages of Image, nonetheless), this news may come at no surprise. Still, it took 4-years since Marvel hinted at the purchase for Miracleman to finally happen.

It was actually intended to release once again as Marvelman, but the whole Captain Marvel-turned-Shazam thing might ring a bell as to why Miracleman is perhaps the better go.

Originally written by Alan Moore with art from Garry Leach and later Alan Davis, the series will begin with the Watchmen/V for Vendetta author’s run and finish with new stories from Gaiman and artist Mark Buckingham, in addition to new background stories in each issue and completely remastered (recolored and relettered) art from Davis, Buckingham, and Leach. If you’re not excited for this, then you must not have a pulse.

What the debut of Marvelman meant to the industry… a change from comics that always returned to the status quo. Since the Big Two’s properties were always such hot commodities for newer audiences, lines of toys, and Hollywood adaptations, creators could always make the comics darker, scarier, and more menacing, but at the end of the day, those books still contained marketable superheroes. You could always break the Bat, but you’re never going to change him.

Marvelman, on the other hand, was a figure told by Moore and Leach like no other “superhero” at the time. Other than this guy appearing no more than an obvious “whitebread” backlash of Captain Marvel reprints, there was plenty of story to tell. Marvelman wasn’t just another guy ready to defeat forces of evil for all that is good in the world; no, Michael Moran was more likely the only believable “hero” during this particular time of nuclear paranoia. If this sounds a lot like today — with the replacement of the cold war “nuclear” for more of the “at any time terrorism” — then you’re damn straight.

Not only did Moore’s 16 issues of Marvelman revolutionize the superhero genre, it brought dreams to reality. There was something strangely and stoically confident about this guy. Perhaps it was because Moran focused more of his energy on the bitterness of his domestic life (a wife that doesn’t approve of his superhuman abilities, oh my!) than any sort of saviorist bragging right. And, it wouldn’t be a Moore story without the focus on the loss of innocence, which can be found in Moran’s former partner turned arch-enemy, Kid Marvelman/Miracleman.

What the realism of MiracleMarvelman meant to the industry… is that a character like Animal Man could now happen. Not only were shitty real-life events solely “referred to,” but, rather, now depicted. If there were contractions during childbirth, Moore’s Miracleman comic was going to show it. Call it explicit, call it reality comics, or just call it Alan Moore.

Around the halfway point during his run, Moore’s goals for Miracleman became more and more clear: this is what “real life” superheroes would do. The author wouldn’t merely devise up a character who’d wish spells, or pull something from out of space. He’s a figure that would actually become present every step of the way (in this particular case, childbirth) — no matter how messianic his approach.

It was time Miracleman was starting to live up to his name — without the use of modified mayonniase.

Soon after, Miracleman could have easily became Miraclegod. After defeating his former buddy Johnny Bates (aka Kid Whateverman) hopefully one last time, it was now time to rise above mere criminals on the street, and create a place where only gods can roam. Thoughts of Olympus, cue Metallica song. It’s the story of a displaced god; you know, the rich prettyboy in high school who’s always getting into trouble. Once again, leave the super-facist angle perfection to Moore.

What the rest of Miracleman meant to the industry… Well it was the 90s, man. Neil Gaiman took over the book and gave Michael Moran some neon pink L.A. Gears and let him run with it. In other words, he took Miracleman out of the book completely. If you followed the author throughout his panels of pilgramage in the likes of Sandman and Batman, you know it’s more about the journey surrounding the god than the actual god himself. Yes, the Caped Crusader appeared no more than a god-like figure during his death in Gaiman’s Whatever Happened to the Caped Crusader — for all of Gotham was worshipping him, of course.

With Fables artist Buckingham taking a different approach to each Gaiman story, each comic of Miracleman showcased a god who chooses how he pleases. Much like The Man Upstairs, some miracles happen and some don’t. Through triumph and tragedy, the human struggle of hope is further explored through this World with a Miracleman. After reading that, it becomes more clear why Zack Snyder allowed all those Metropolis buildings to fall and all of those good people to perish in Man of Steel. A god simply can’t make all of the right choices; he can’t do everything to save humanity on his own.

I wonder if there will be any sort of fan backlash warranted when these Marvel reprints of Miracleman — let’s say, refusing to save an innocent victim subsided during one of his terrible battles — hit all of the local comic shops. My guess is the same as Moran’s answer then: “No.”

More than answers with Miracleman, though, Gaiman offered ambition. Some of the panels and color pallettes the creative team aimed for reflected Andy Warhol and other impressionist art, as Miracleman’s journey offers artificial love, dreadful disaster, and opportunistic dream. It’s not surprising Gaiman showcased his more poetic tendancies with this title over Moore’s bullhorn politics.

However you prefer, this is a story that needs to be released, retold, and finished. Say what you want about Marvel and their antics, politics, and often frustrating business mentality, but the reprinting and further conclusion to the Miracleman/Marvelman saga is one of the publisher’s all-time greatest moves.

Call it a miracle on ice.. but I know I can’t wait for January.

More Marvel News from New York Comic-Con 2013 (in addition to our NYCC Wrap-Up Podcast scheduled for post this weekend):