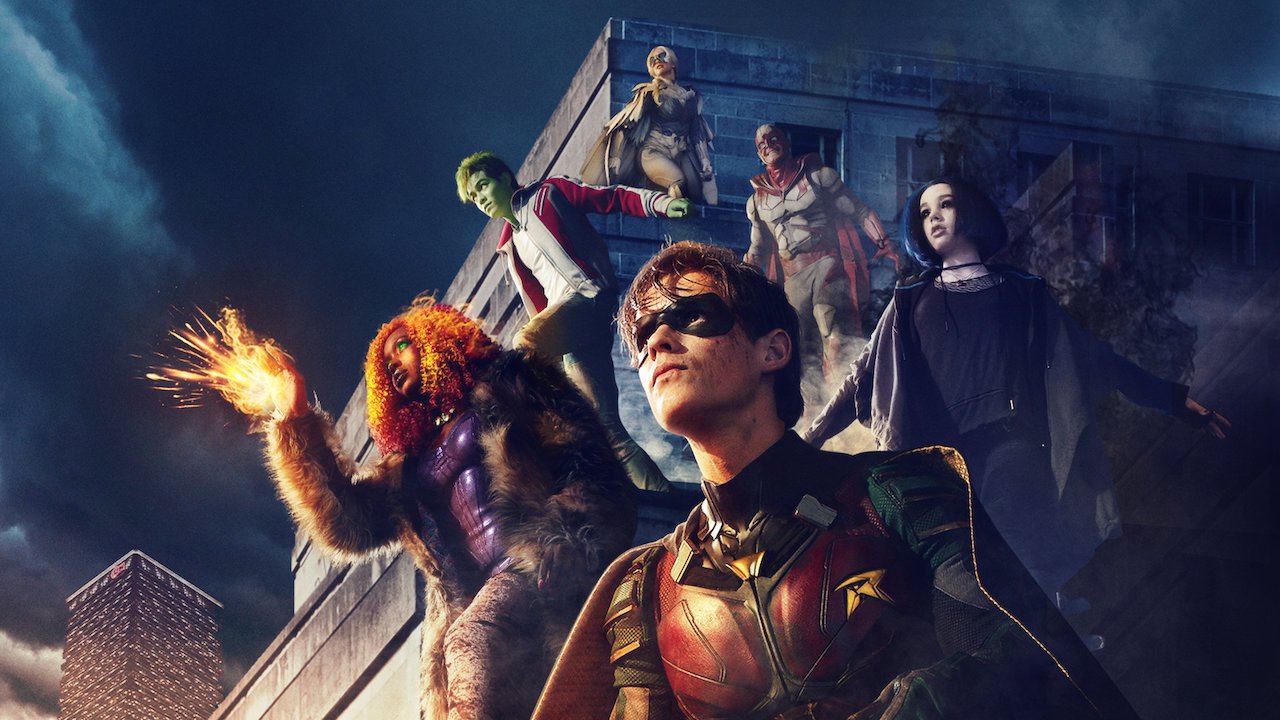 It’s the tried and trusted return of GHG’s Sunday Night Stash! And this week we’ve got a bit of variety going on, with some titles from some disparate publishers. So, let’s jump into all the “burning rage”, shall we?

The Once and Future King is prophesied to return. Is that good or bad? This is the question posed by writer Kieron Gillen and artist Dan Mora have in store in this modern supernatural adventure series. The story begins with a find at an archaeological dig in Great Britain; the expedition ultimately ends in bloodshed as the archaeologist is murdered and the ancient scabbard is stolen. Upon hearing about the theft, Bridgette, abnormally knowledgeable retired hunter, or sorts, enlists her grandson, for help. Their reunion is short-lived when a supernatural beast attacks, proving Bridgette is something much more than just some retired hunter. She then reveals her plan to her grandson: they are going to Glastonbury where she intends to prevent Arthur, the titular Once and Future King, from returning. Prophecies are never as clear as they seem.

Whether it be humor, intimidation, or a sense of adventure, together, Mora and Tamra Bonvillain create a balance in their presentation. Mora’s art and Bonvillain’s colors stand out the most in this book, articulating a world I want to see more of. With Duncan and Bridgette’s first encounter with a questing beast, a great sized creature seemed to be made up of an amalgam of animals, the solution in the end wasn’t as violent as Duncan thought it was going to play out. Duncan was a passed a spear by Bridgette, thinking he was going to use it to end the creature, he screamed and held the spear out, but it had stopped. It took in the spear, growl, and calmly walked off. 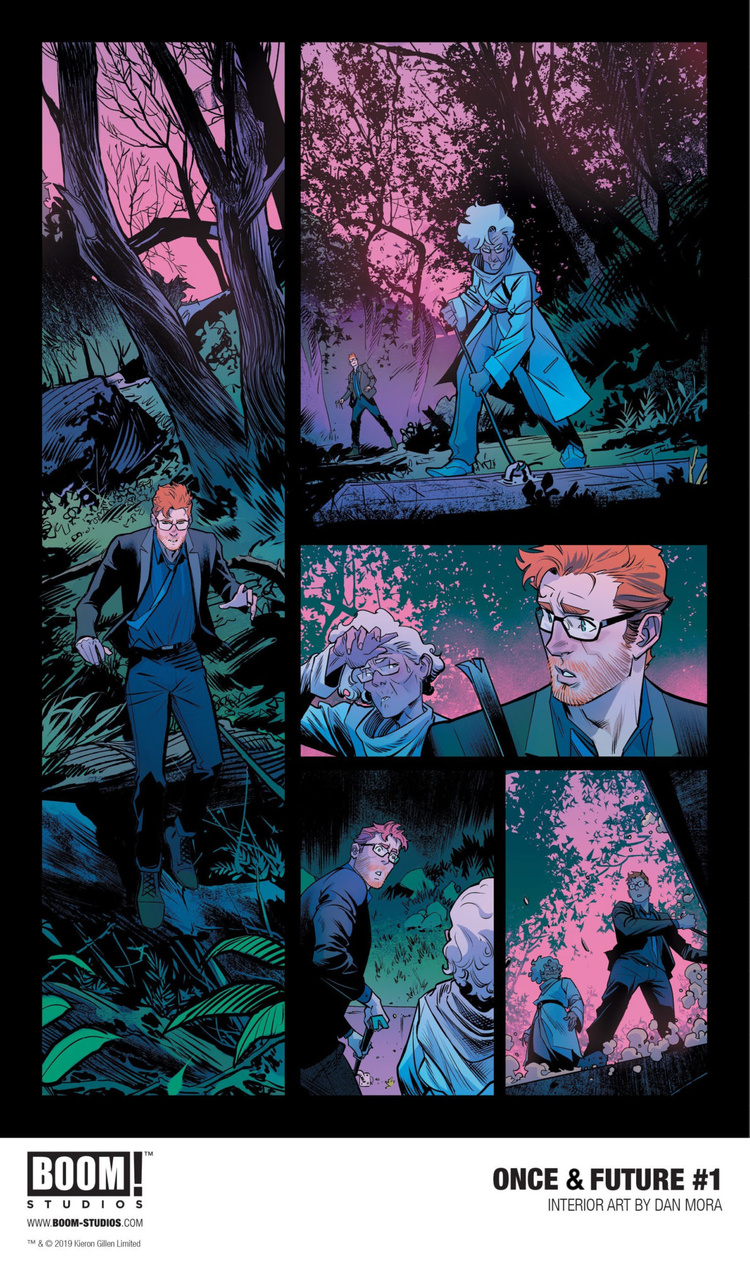 Though addressing herself as a hunter, Gillen’s writing for Bridgette illustrates that not all creatures need to meet a violent end and can be sympathized with; this creates a potential in the encounters to come with the supernatural, and that they can vary. Compared to the one-note characters (so far) who murdered for their conviction, Bridgette’s solution to end the coming conflict is not so clear. What will she do with the remains of Arthur? When we learn more about the group of people who want to resurrect him, what choices will Bridgette and Duncan make when they confront them? I’m excited to learn more about Bridgette, but also see how a normal clumsy Duncan can fit in and adapt too. 3.5/5 Bibles.

In the bizarre realm of comic lore, I dunno what style of storyline I was reading. Either I inhaled far too much fumage from the ammunition and explosives that Frank Castle dispenses– or.. I’m tripping on a unaware LSD dosage. I mean, what I read was like one part Game of Thrones-lore meets Thor: Ragnarok with a sprinkle of late 70’s/mid-era 80’s metal band awesomeness.

While I didn’t know where Gerry Duggan‘s story was going, Juan Ferreyra‘s art was crisp, the inking was fluid and it was visual love candy for the eyes. I mean, come on! Punisher was in the cosmic with a unicorn pulling an 80’s econoline shaggin’ wagon with rainbows.

Did I mention Frank Castle had a Skyrim Viking helmet on as well? I mean “what”? All I know is I don’t give 2 cents on the story currently but I want more of this art crazy awesomeness! 3.5/5 Bibles.

The White Trees, you say??? Shit, I’d rather be smoking trees, but since I gave up the herb in a distant land, a long time ago, I had to settle for reading this joint from Image Comics instead…

Imagine, if you will, a world where Westoros meets Middle-Earth by-way-of a desert planet called Tatooine. Abduct yourself inside this surfacecrawler and you’ll soon encounter an heroic three-way-of-sorts, comprised of: a leather-strapped, axe-wielding, hipster-bearded Chewbacca stand-in, rocking bangles and earrings; a genderfluid, body-building elf looking jacked-up on anabolic steroids, who’s seemingly born of Morgan Fairchild and Arnold Schwarzenegger; and a fur-trimmed Joel Edgerton clone with a streaky beard, donning an over-sized sword and what looks like a gargantuan cockring hanging shindeep from his waistbelt. 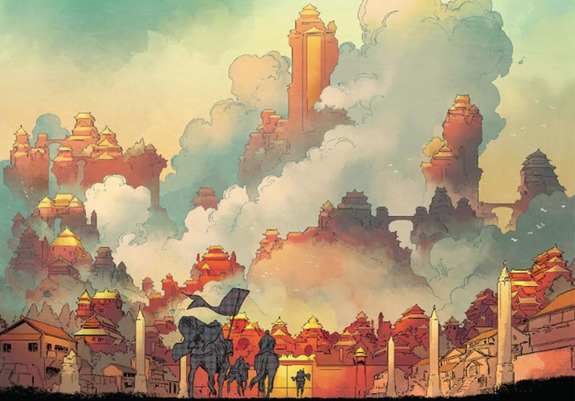 Interestingly, Image doesn’t include their “For Mature Readers” disclaimer (which is pretty obviously telegraphed in the imagery depicted on its cover) until after you’ve read the digital version of this issue. But all the same. If you enjoy uninspired and clichéd character names with their boring titles, and artwork and writing seemingly so minimalistic at times that it looks and reads like it was dialed in from a defunct payphone using sign language and a blunted No. 2 pencil, then this is the book you’re looking for.

Despite the aesthetic and literary mediocrity within thus far, the colorful content of these characters rides triple-shotgun alongside the possibilities of interspecies love triangles, a coterie of deadly villains and supporting characters derived from Pop Culture’s present and past (who doesn’t love a royal ruler who channels Flash Gordon’s Ming the Merciless in a red deviled robe???), and maybe…just maybe…even fateful and orgiastic encounters drenched in inebriating love fluids jettisoned from mythical demons, magical monsters, and as-of-yet-discovered quadrupeds… 3.25/5 Freshly-Coined Smaug Piles.

It’s been quite a bit since I’ve read a Titans comic, but I’m really glad I read this one.

Dan Jurgens brings the characters to life in a way that you know who is speaking, even if no one is in the frame. With Tim Drake’s Robin leading this iteration of the team, this adventure introduces us to a new villain by the name of The Disruptor, who can disrupt literally anything (apt name, eh?!). It’s a power that I need to learn more about, but it works to give the Titans one hell of a tough time. And with H.I.V.E behind him, this is going to be a very long and difficult battle. 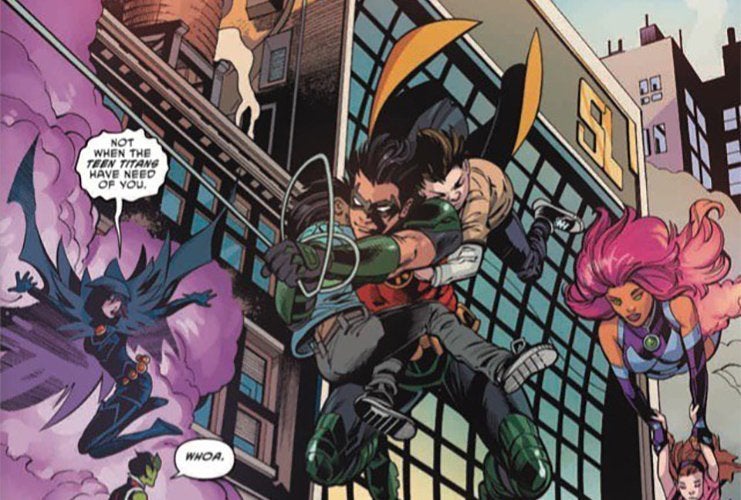 The art is where it is at, though. Scot Eaton, Wayne Faucher, and Jim Charalampidis have brought back a really classic feel, but with much more attention to detail, especially in the faces and uniforms. I have found with many comics that faces get ignored and muddled; but here, they managed to capture every expression, even in the smaller frames.

I will, most definitely, be following this story as it moves forward. I didn’t realize how much I missed the Titans, and I’m sure you’ll have that same excitement. 4.75/5 Bibles.