Our All-New FISTFUL of COMICS Now! is back–and we’ve got a slate of both new and old school reviewers seeking their inner demons. It’s the evil within our congregation that.. oh.. we sometimes just gotta get out. With that said, study up on the goods, check your pull-lists twice and enjoy the show.

Me and you… your mama and the Minister too…

Surely, I’m reviewing an indie comic about a priest and a scraggly young guy set in some countryside town? Hmm, deja-vu. Hopefully I’m not let down all over again. Outcast #1 is Comic Book Kingpin Robert Kirkman’s latest creation. It isn’t much of a spoiler to say that the plot centers around demons and demonic possession, so it’s good to see Kirkman staying in the horror genre after the insane success of The Walking Dead franchise.

The book centers around Kyle Barnes, a hermit twenty-something year old living in a run-down house in West Virginia. Exciting right? Oh, I almost forgot, demonic possessions seem to be destroying his life one person at a time. Although he isn’t the one actually being possessed, it seems on several occasions alluded to in the premiere issue, demons have been the cause of every shitty event he’s lived through so far. 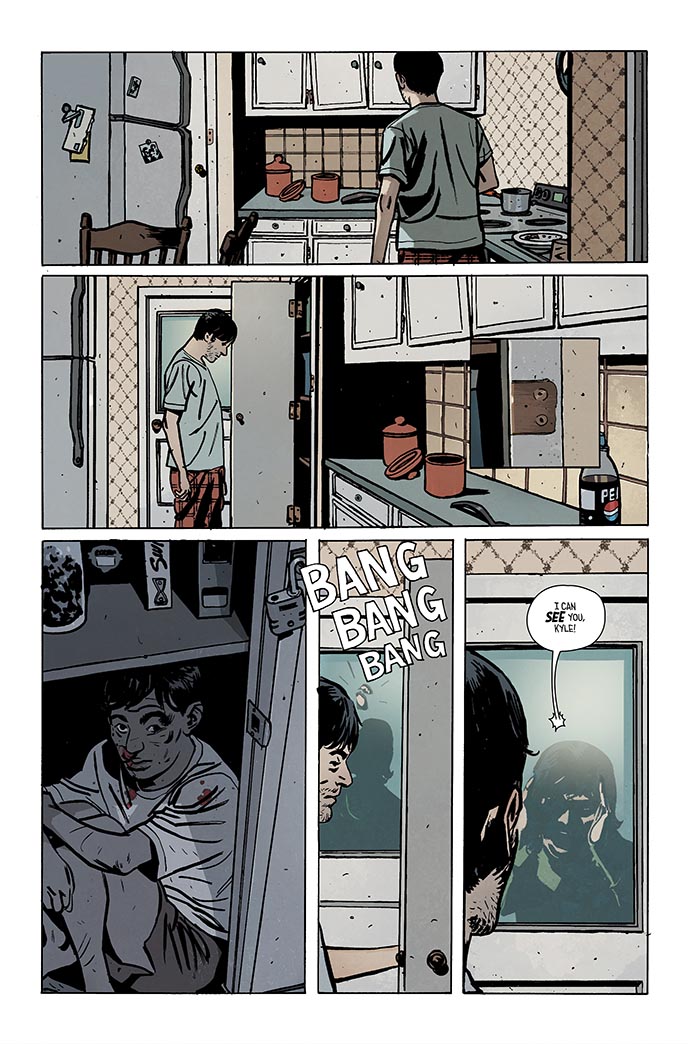 What really sells this book for me is the work of artist Paul Azaceta (Amazing Spider-Man) and colorist Elizabeth Breitweiser (Agents of Atlas). Azaceta’s simple, brushed inkwork speak volumes when it comes to facial expressions and gestures. Kyle’s contemplation, frustration, and anger really come through using minimal line work. And that drawing of Joshua’s creepy possessed smile just gives me the chills! Breitweiser’s color pallete perfectly compliments Azaceta’s linework, giving the book a rustic, stained, sun-bleached feel. All the muted, desaturated tones successfully establish the dull, suburban setting which makes it all the more shocking when the bright red blood hits the page (which is by like, page 2).

Overall, Kirkman delivers a fantastic introduction to Kyle’s world of demons. Every little panel and speech bubble is geared to establish these complex characters and their complicated relationship to one another. You honestly get more story out of these 44-pages than some mainstream comics give you in a 5-month story arc.

And just one last creepy nail in the coffin is Kirkman’s note to the reader at the end of the book. He explains how he’s writing this comic from the perspective that demonic possession is very real. And trust me, he writes it without a drop of irony. Whether you agree or disagree with him you’ve got to admit, it’s a scary thought.

So if you wanna be a hipster, and say “Pshh, I read Outcast before it was a TV show” (which Kirkman says is already in the works!), OR if you just wanna see a child get punched in the face by an adult man (probably my favorite panel), go ahead; give Outcast a read. Cuz hell, if demons are as real as Kirkman says they are, I’m gonna need these…

Jai Nitz (Blue Beetle) & Greg (Moon Knight) Smallwood‘s follow-up to their 2013 Dream Thief meets the world with striking cover design, jaunty panel layouts and nicely-detailed art (all Smallwood’s doing), but these are quickly toppled by Nitz’s convoluted-yet-not-that-eventful story and broad, sub-Tarantino swipes at authenticity that are steeped more in geekdom than grit. Meet “Dream Thief” John Lincoln, a host for the spirits of murder victims to exact bloody revenge on their killers (why this earns him the moniker “Dream Thief” and not, I don’t know; “Ghost Tube” escapes me). Lincoln’s power is tied to a mask he stole from a museum in last year’s arc, but despite DT:E‘s frequent dead-stops for exposition, the rules of this power remain frustratingly obscure. In a richer character this might matter less, but Lincoln is the center that can’t hold – being a vessel for the comparatively fleshed-out-in-flashback ghosts robs him of agency and morality; he feels righteous in carrying out other people’s revenge, and that’s the end of that conversation. I could see myself getting into a breezier take on the murder-by-possession hook, where Nitz & Smallwood just set it up and run with it, rather than try to legitimize it with layer after layer of page-eating mythos. And sure, I might get more out of this if I had read the 2013 arc – though little here makes me want to catch up on what I’ve missed, and if you’re going to put #1 on your cover, your book should be more plug-and-play than this. 2/5 Dream Knives.

It’s clear that Marvel is looking to ramp up The Sorcerer Supreme now that he will be joining the MCU — and perhaps that’s why he is the subject of the first New Avengers Annual in the Marvel Now era. Really though, who gives a S#%T about the reason, the point is we’re finally going to get the modern Strange we deserve with this book a firm step in the right direction. The ish from Frank J. Barbiere (Solar: Man of the Atom) revisits a pivotal moment from Strange’s past while he simultaneously battles a badass, universe threatening demon monster. I’ll be honest, I’m typically story first when it comes to comics, art usually comes second but by the hoary hosts of Hoggoth is Marco (Swamp Thing) Rudy‘s art in this book amazing! It’s honestly one of the most gorgeous books I’ve seen in a ages and any long time Strange fan will tell you that the Master of the Mystic Arts has a knack for bringing out the best in comic artists. Doctor Strange fans should adore this book, but newcomers will find a nice introduction into the character as well. This is a must read. 5/5 Mystic Bibles.

It was quite nostalgic to re-dive into the Hulk origin storyline, only this time more so through the POV of Tony Stark. What was more shocking than anything, was Mark Waid (Daredevil) & Kieron (The Wicked + The Divine) Gillen‘s hint at the fact that storylines are becoming more tied together just like most comic films nowadays. I don’t recall from my heyday of reading Hulk comics much mention of Tony Stark; sure, a stark industries was in there, but again its been years. Unfortunately, this Original Sin event tie-in fails to captivate, as this version of Stark comes off as quite the attention killer rather than the engaging emotional killer. There’s just far too much exposition for a comic that promises a face-off between two of the most dynamic Avengers of all: the fan-dubbed Science Bros. Certainly, this is no Planet Hulk, and the first few pages of that EVENT alone display more depth than this entire comic. Gamma Ray Bruce Banner Rage at how Jackie Collins dapple this issue was. 1.5/5 Gammas.