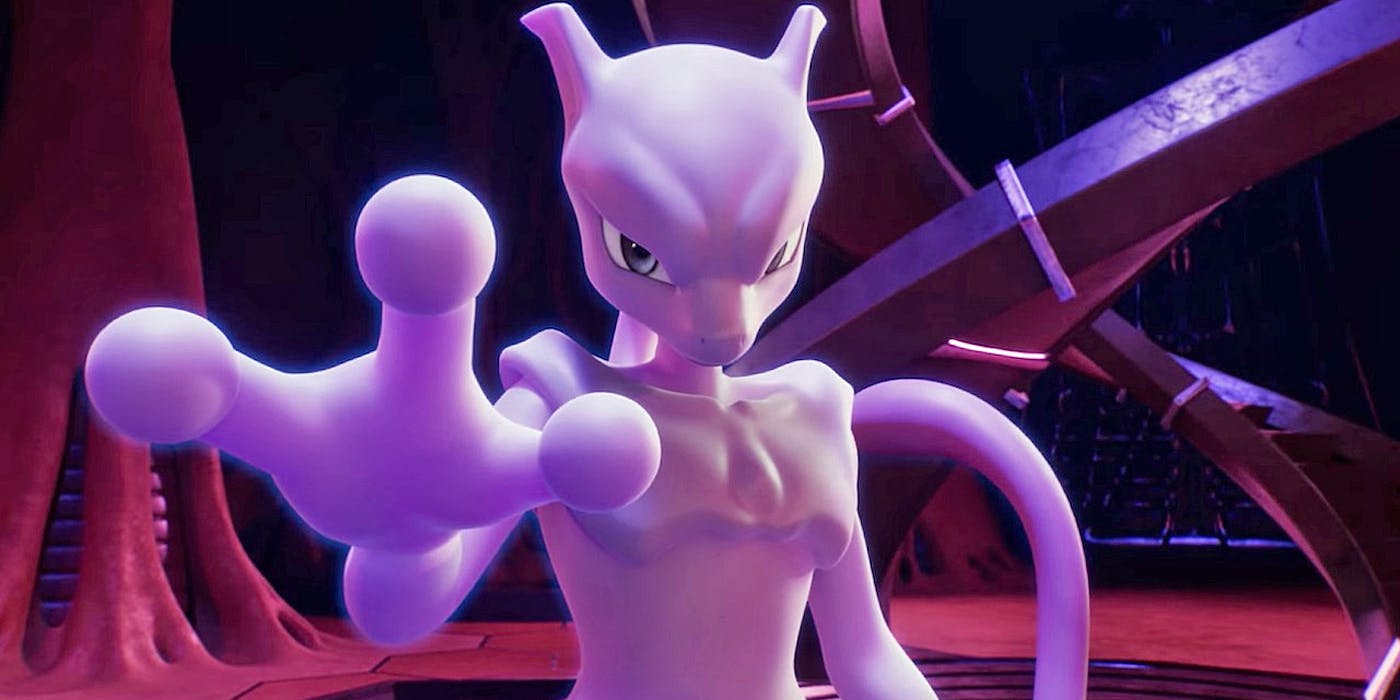 Thanks to a brand new 3DCG adaptation of Mewtwo Strikes Back (adding an “Evolution” to the title), there are now 22 Pokémon anime flicks– and this visual remaster of the first one is also my.. first one. A scene-for-scene remake with updated effects and tunes sounded like the perfect jumping-on point for this weeb, and Pokémon the Movie: Mewtwo Strikes Back Evolution didn’t disappoint.

But dammit, Pika, why’d you have to make this Poké n00b shed tears? It’s like I laughed at myself knowing they were coming and it happened anyway…

Mewtwo Strikes Back Evolution is the cutest non-Disney animated movie I’ve seen in recent memory, maybe dating all the way back to Fieval Goes F’N West. No matter how much I tried to resist, Pikachu (Ikue Ôtani) and his fellow Pocket Monsters absolutely tugged at my heartstrings. Of course, the furry little icon is a far cry from the (still awesome) Deadpool-like persona of the live action Detective Pikachu; Ryan Reynolds killed it as Det. Pika, though in the total opposite way this Pika many new fans will recognize from Super Smash Bros Ultimate does. Yeah, I’m not afraid to admit it– the whole world of Pokémon is a new thing to me, and, as if The Pokémon Company needed another fan, Motonori Sakakibara and Tetsuo Yajima‘s remastered anime has secured at least one new one.

We watched it in Japanese. As a fan of the subs, I was thrilled to be a part of a few lucky hundred at Anime Expo to watch the authentic version. I’m assuming the classic 1998 sub isn’t the same as the ’99 dub resting at a 35 on Metacritic and 15 on Rotten Tomatoes. As a new fan, I enjoyed the simple plot; it’s Mewtwo versus Mew, with the usual Poke-Masters running into trouble. Led by Ash/Satoshi (Rica Matsumoto), the human characters are all, at least surprising to this reviewer, likeable and have great interpersonal reactions. Brock/Takeshi (Yûji Ueda) is an instant stand-out, and his fuckboi tendencies deliver the brunt of the laughs in the film’s first half.

The big dramatic narrative should also remind new and unfamiliar Poke fans of Age of Ultron; the super powered Mewtwo is the forward-thinking, (only, in this case, biological-over-mechanically) engineered Pokémon set to hand those bloody humans what they deserve: treatment as second rate citizens, or, more apropos, as pets. Yeah-huh, the bitter Mister Mewtwo creates more “legendary” copies to crush these Masters (just like he had punished all his original genetic creators) and all their woeful Poké pal originals. The mystery of the protagonist’s main draw for power, though — Mew — is the river that flows through the plot streams and keeps the hope gleaming. The interactions between friends, the Pokémon and their clones is as strange and imaginative as you’d ever want it to be. There’s a lot of funny banter and exciting fisticuffs between many of the selected Gen-1 O.G.’s (i.e. Squirtle, Charizard and Bulbasaur) and Mewtwo’s remixes.

It’s the Clone Wars set off by Frankenstein with majestic animal monsters instead of classic horror. The new CGI gloss-over is real easy on the eyes, wide in scope, bright in color and seamless in transition. Gamers would call it 60 frames-per-second. There’s no doubt that Mewtwo Strikes Back Evolution is going to look absolutely delicious on a 4K Blu Ray. The script is light enough for the youngest of children, yet mature enough to get anime-loving adults searching for kleenex. 4/5 Bibles.

Pokémon the Movie: Mewtwo Strikes Back Evolution is set to hit Japan on July 12th. #subsnotdubs