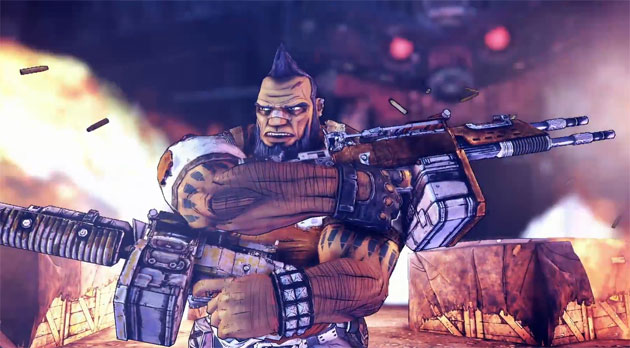 Travis Moody: Dosey-doe, oh, yo-no hello there, Marlina! Seems we got ourselves quite the event coming up this week..

Marlina Moreno: For sure, Trav! Though I have no idea what to expect! Going game crazy over here.

TM: What’s odd to me lately are all these announcements and exclusive game previews the weekend before E3, with WWE 13, the shocking news that there’ll be yet another Gears of War (the new cover of Game Informer), and a new trailer for Skyrim‘s DLC, Dawnguard:

MM: But I can pretend!

TM: Sounds familiar. I actually got through more of Witcher 2.

MM: You.. would. So, anyways, I’m all about Wii-U. In a true Southern California woman’s world, we don’t really have the time to pluck bows and sing spells for 70 hours, do we, ladies? But I’m kinda liking the whole mobile aspect of the new Nintendo. Take it on the go, play some Super Mario after a long day of shooting…

MM: I thought you’d say Call of Duty. No, doll. But I like the sound of Youtube integration and touch screen!

TM: Since Nintendo hasn’t done much for me lately outside of Zelda, Wiiiii-UUU.

MM: Whatever, boy. But I don’t have an iPad and maybe this will take care of that.

TM: I can just imagine you posting some blogs on your site to the sounds of Goombas getting stomped. Speaking of stomps, there’s going to be a whole lot of dweeb-pushing if the doors open for Halo 4.

MM: Party time! I love Halo because I can talk shit! I didn’t play Reach, or whatever, but Halo 3 was a blast, dog.

TM: I’m the opposite. I LOVED the local multiplayer on the old XBox Halo’s but missed on 3 entirely – I guess I used to have a “life,” or something – and then tore up Reach’s campaign with an old roommate. Halo 4 WILL BE the biggest deal of E3. I know I had the shivers just watching the teaser trailer on G4 last year.

MM: Slow your roll. Call of Duty still sells the most games, don’t they, and here comes Black Ops 2. But I’m thinking Borderlands 2 is more your vibe, isn’t it Mr. Comic Book?

TM: Funny you mention those games, because I never played either of the originals (damn, I’m starting to lose a lot of credibility here), but you’re right about Borderlands 2. Definitely has that whole cybernetic art-feel going for it.

MM: All of this talk about shooters gives me the heebie-jeebies for some Resident Evil 6!

MM: Hah. You mentioned that no one cared about that one at last year’s Comic Con. And Raccoon City, that’s just a bad name. But from what I heard about RE6, they’re joining some of the earlier heroes and yadda yadda. Time to cut some zombies!

MM: What’s scary are my Tekken skills! And now my big grizzly bear gets to teeth into some Street Fighters for Vita.

TM: Isn’t that where you’re from?

TM: You and your handheld games. And you’re CLEARLY a Playstation girl.

TM: We can’t leave this conversation without bringing up the Big 2.

MM: But I thought we already mentioned Halo and COD!

TM: Oh, and let’s not forget Assassin’s Creed III! Since half the game takes place in Beantown, you know I gotta represent.

MM: I can’t get that damn eagle screech out of my head now, thanks.

MM: Aww…legos and super heroes. Aren’t you just adorable? I thought you were going to talk about that Injustice fighting game.

TM: Honestly, I had no idea what that was until that guy posted it on our facebook. I doubt we’ll hear anything much about it this week; just like I doubt there’ll be anything about Grand Theft Auto V since Rock Star will just be passing out their energy drinks this year…

MM: What? You okay over there? You can’t tell me that Tomb Raider doesn’t look amazing.

TM: Sure does. But it was supposed to come out like 6 months ago. Actually, Prototype 2 is calling me right now, so let’s just give the people some last minute anticipations.

MM: NBA Baller Beats, yo! No, I’m just kidding. I’ll second that Amazing Spider-Man because if it’s anything like the Harley Quinn shit I’m playing now in Arkham City, then hell yes!

TM: I thought you were a Transformers girl for some reason. Oh, no, just having flashbacks. But I’ll bet that Fall of Cybertron will be better than the last couple movies.

TM: Too many games, so little time! I’ll name 2. My sleeper will probably be Spec Ops: The Line since all the hype will obviously surround the COD and Battlefield franchises.

MM: That’s the one where the soldiers have to make “real life” mental decisions rather than just shooting shit up and talking mad shit to 13-year olds in Indiana?

TM: LOL. Could be a groundbreaker. But, other than the previously mentioned big-shots, this reverend’s got to go with Alien: Colonial Marines. If I’m going to be “shooting shit up” – and I promise you Moody stopped hanging out with Nikki Sixx years ago – then I’d rather it be those cute wittle aliens.

MM: Have a great night, dog!

Cover your swag tables and your kneecaps, because these two wacky kids are about to invade a diocese they have no business praying at. Regardless, the Los Angeles Convention Center will provide GHG with plenty of “exclusive” game trailers, designer/publisher interviews and early demo cheerleading — professionally — this week at E3. So, follow us!