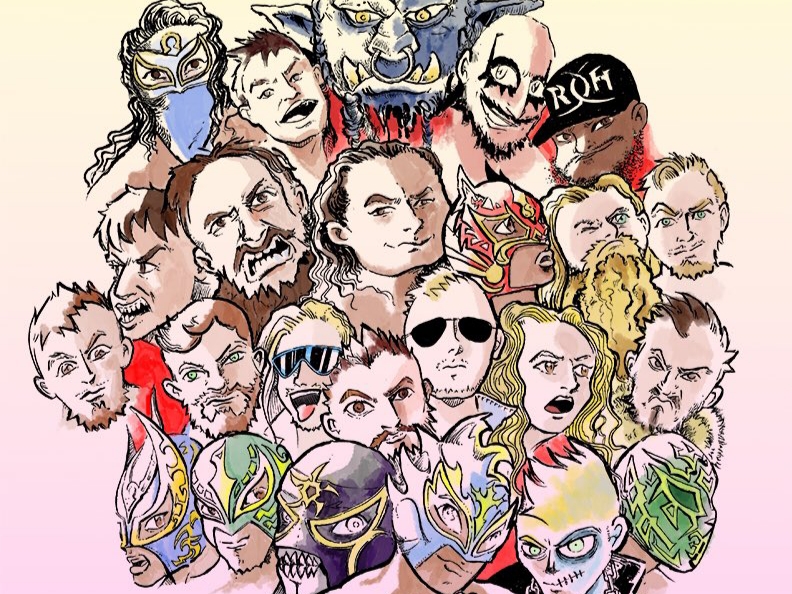 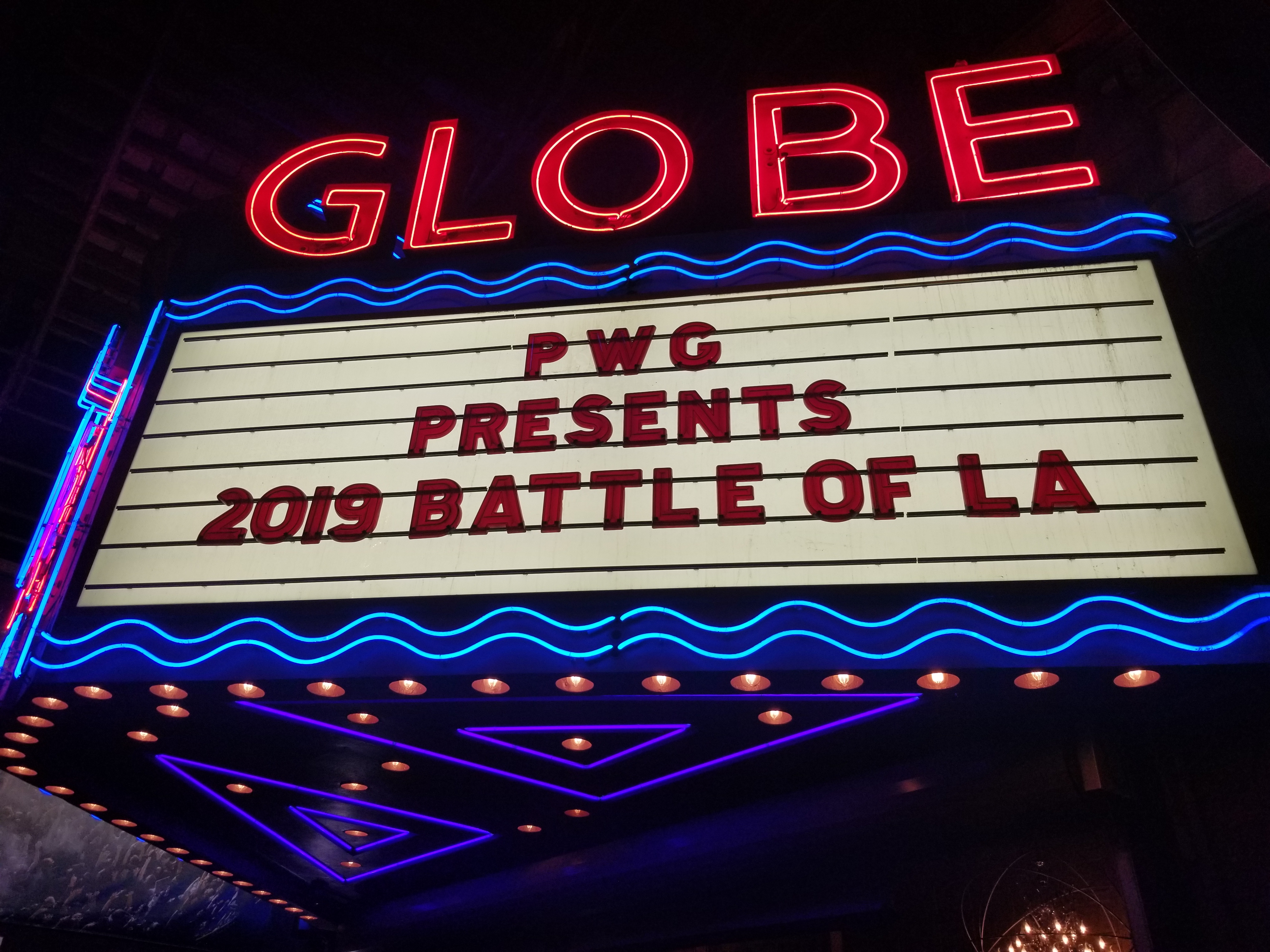 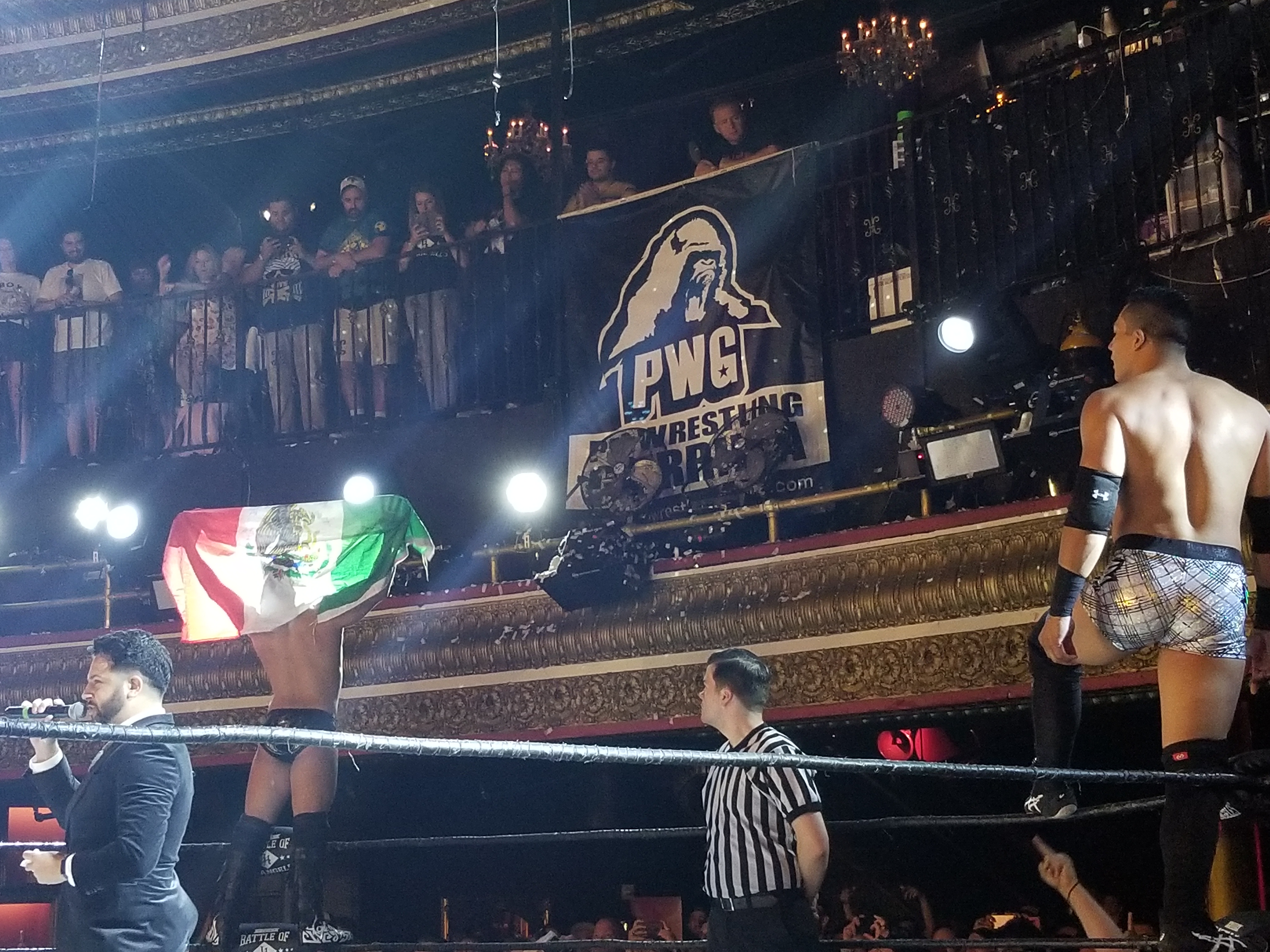 –BOLA – 2nd Round: Dragon Lee vs. Jake Atlas – I remember not too long back.. maybe a year ago, maybe less.. when some PWG hardcores were callin’ for Jake’s head. He underperformed, botched many spots, and just had a difficult time getting over in the promotion. Who’s this flamboyant clown? Now, at the Battle of Los Angeles of all places, he’s had arguably two of the best — if not the two best — matches of the tournament. Talk about a rising star; the “Daniel Bryan babyface” level of reaction he received last night was evident of that.. Atlas and Dragon Lee had a certified banger, too. While not quite up to the instant classic Jake had the night before with Jungle Boy, it wasn’t too far behind. Atlas brought back an array of flashy moves (cartwheels and all) with Lee doing his natural flying thing, spewing out moonsaults, an apron rana and assorted flip dives. They both exchanged a gazillion Germans, stinging chops and more counter wrestling before Dragon won via his signature padless knee. What a match! – 4.25/5 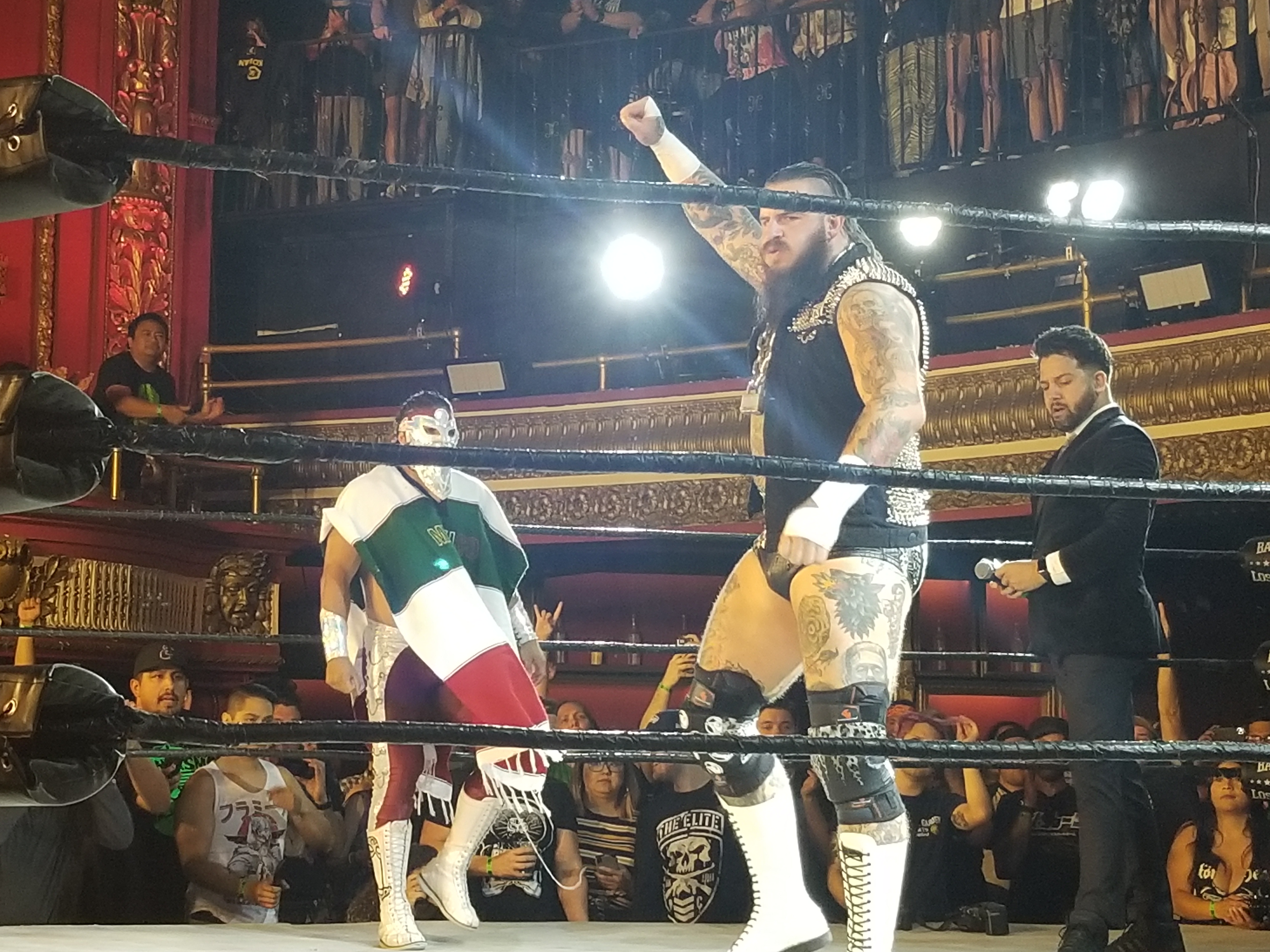 –BOLA – 2nd Round: Bandido vs. Brody King – Something cool: Bandido challenged Brody to a Lucha style match, seeing how the King was trained in the style. Something not cool: There were a good number of botches in the match, glaring mistakes you wouldn’t otherwise see from these two (a missed armdrag and Toyota Roll that just didn’t work). I blame it on them trying to have a Lucha match. Still, Brody is awesome though and certainly wowed with his agility, while Bandido’s strength for a small Lucha guy is unparalled. Despite the mistakes, they still had a good one and Bandido — despite being a finalist one year ago — may have pulled off one of the bigger upsets. I know quite a few, including yours truly, who thought Brody was going all the way. – 3-3.25/5 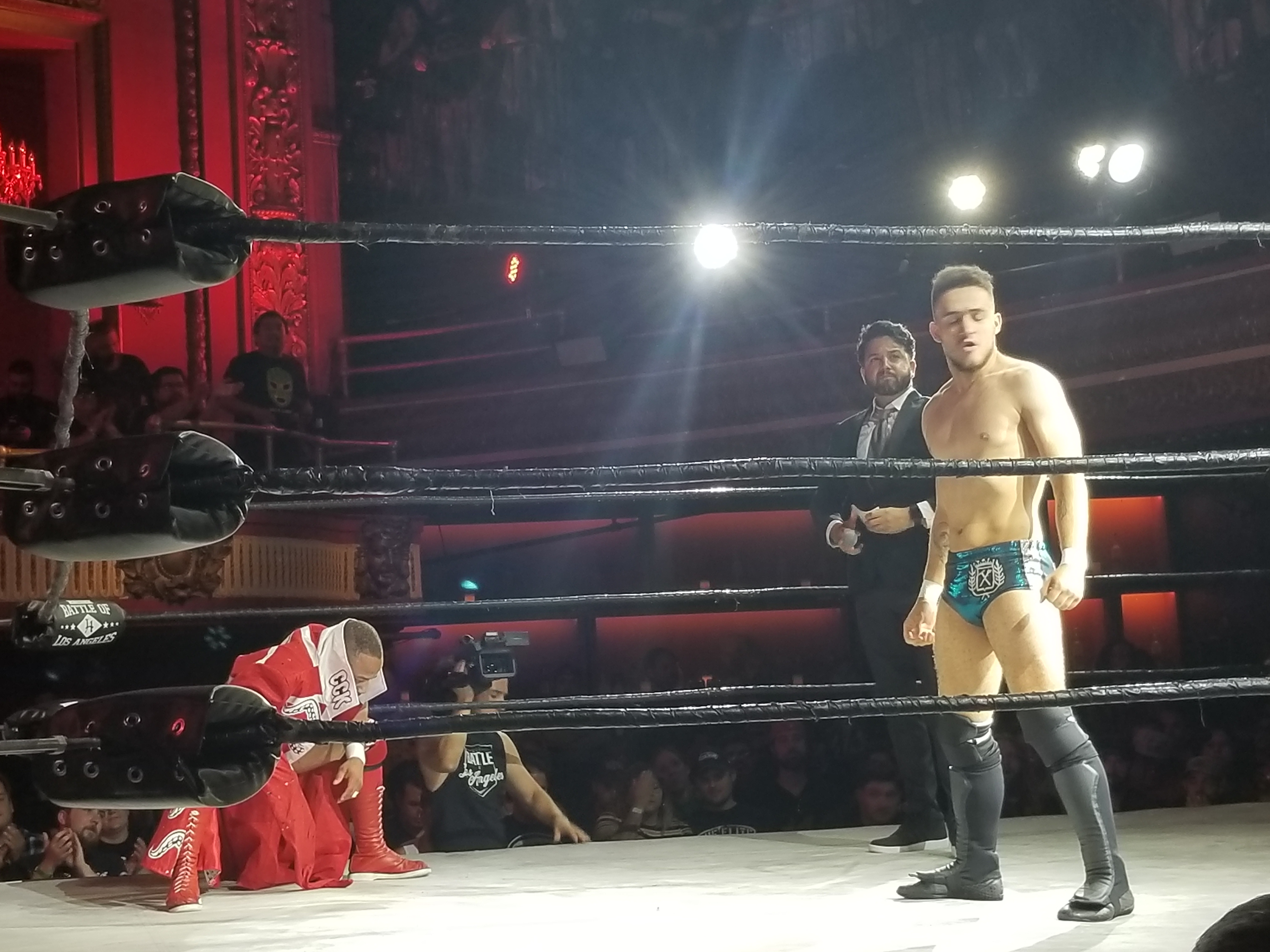 –BOLA – 2nd Round: Jonathan Gresham vs. A-Kid – At intermission, a pair of hardcore PWG fans raved about this match, going so far as to call it the best in the tournament. I don’t agree, but it was definitely very good, solidly technical and wound up feeling like a real fight. While I would’ve liked to have seen this shave a few minutes off, it was def the best performance of the two at this point. Gresham destroyed A-Kid’s knee before his Octopus stretch barrage of blows led to a ref stoppage. – 3.5-3.75/5 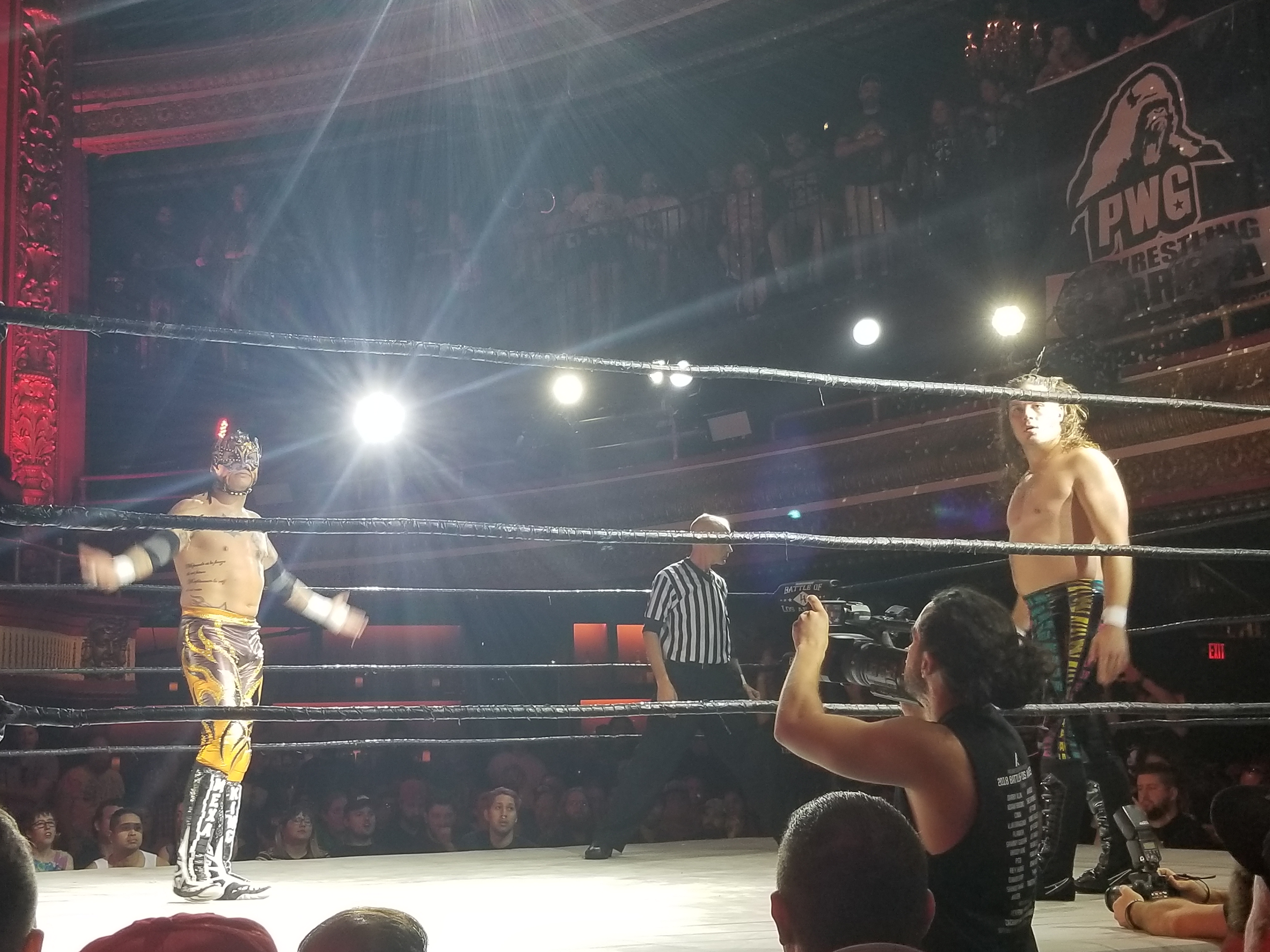 –BOLA – 2nd Round: Joey Janela vs. Rey Fenix – All Elite Wrestling Presents BOLA 2019, Round One. This was pretty good, and great match placement.. seeing how the crowd would get tired at this point but you’ve got a bunch of AEW stars coming out having their battles. Janela’s hardcore matches are among some of my favorite at both PWG and AEW the past few years, and he’s had a few solid non-hardcore matches too, but this wasn’t one of them. He’d turn Fenix’ mask before a superkick put the lucha away. Despite the starpower, overall this was good– not great. – 3/5 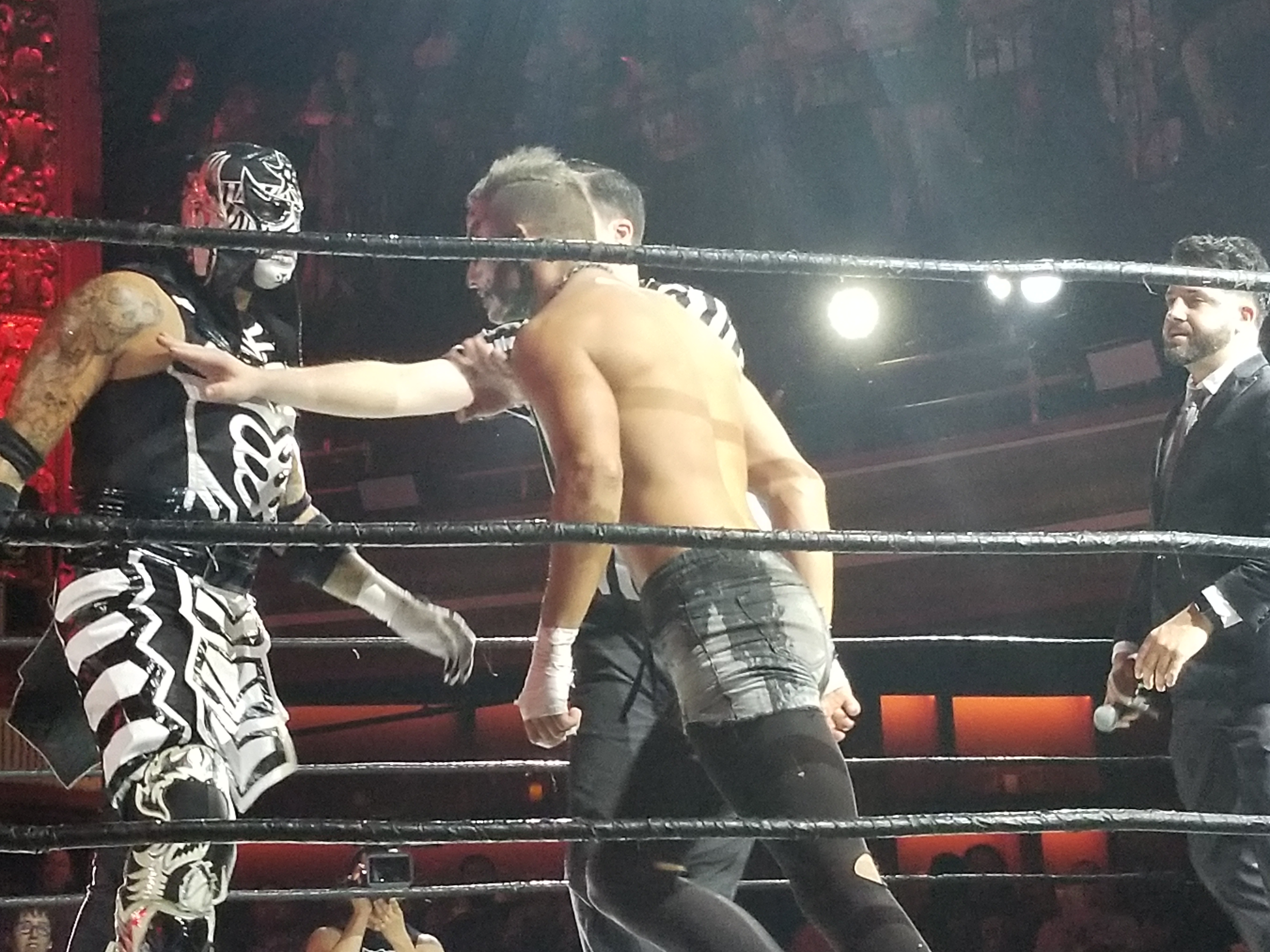 –BOLA – 2nd Round: Darby Allin vs. Penta El Zero M – Penta lessened the Cero Miedo’s to only 4 (or maybe 5), so if you’re ripping back shots of Jose Cuervo for every Cero Miedo, you won’t be nearly as sick as imagined. Antics aside, Penta did a great job elevating Darby to the next round, and putting the spotlight on him. This was real fun, especially when they brought in Hornswoggle’s ladder for a pair of spots; a piledriver absolutely killed Allin before the term “Stepladder Destroyer” became a thing. Yeah, nobody should kick out of this shit. In the end, Darby twisted up Penta with his signature figure-four cradle that followed a Code Red. – 3.25/5 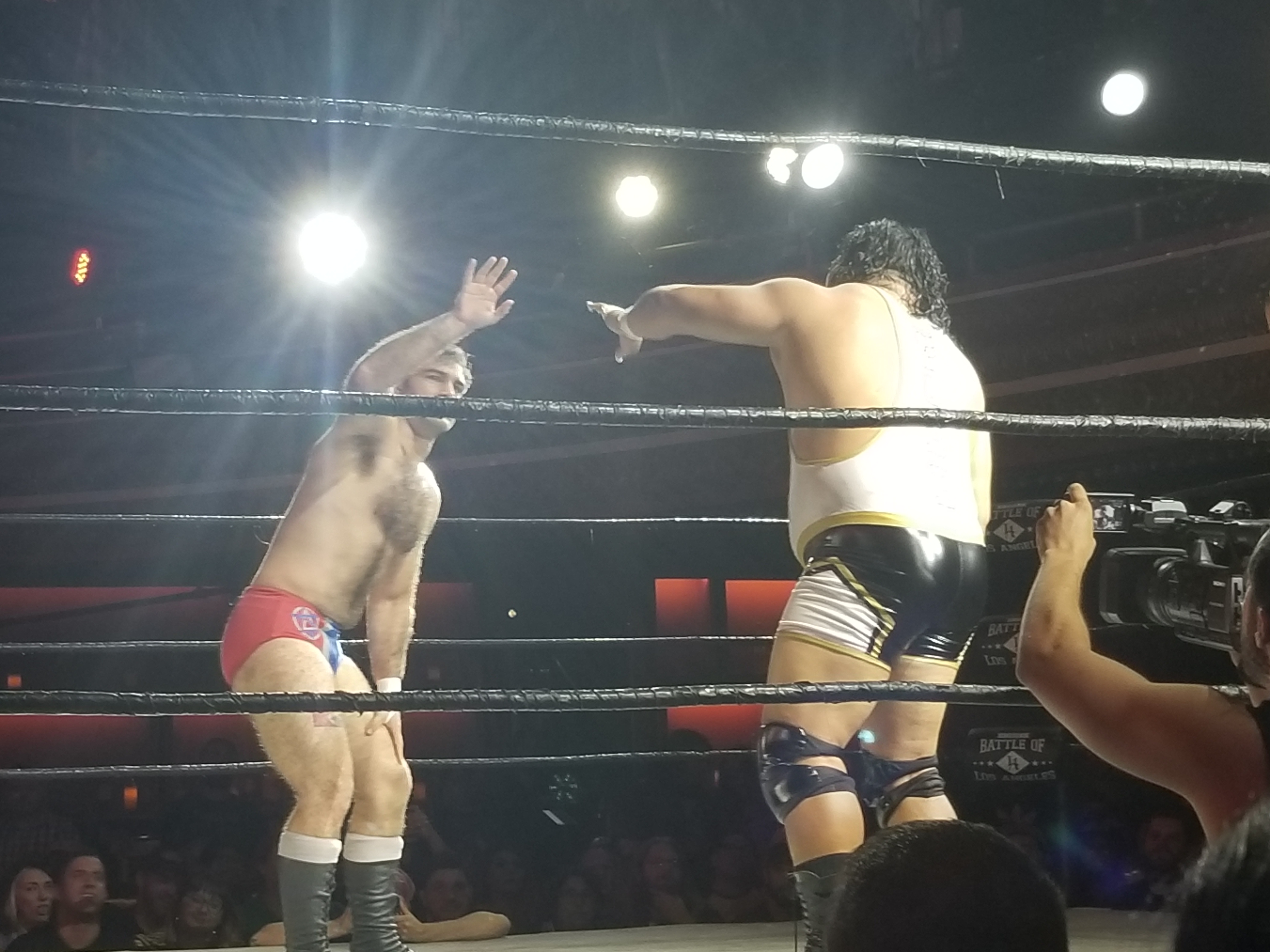 –BOLA – 2nd Round: David Starr vs. Jeff Cobb – As far as ring psychology, this may have been the best match of the entire weekend. David Starr hasn’t done much here in PWG, having a great match with Matt Riddle and a hell of a contest with Gresham and a whole bunch of stinkers. His run here hasn’t been the best. But that all ended with a great story here. As he picked on AEW’s Aubrey Edwards — the first woman to ever ref a PWG match(!!) — repeatedly pushing Gearl Hebner and even took a swing at her, before she got fed up enough to shove Starr down hard to the mat. That wound up backfiring though, when Aub’s got a little too close to the action and Starr caught Cobb with a strike of his own strap. He’d finish off the champ with a heavy lariat, moving him onto the semifinal. I love the booking here. Cobb’s loss doesn’t weaken him due to the bullshit and Starr gets his future rematch. Bravo. – 3.5/5 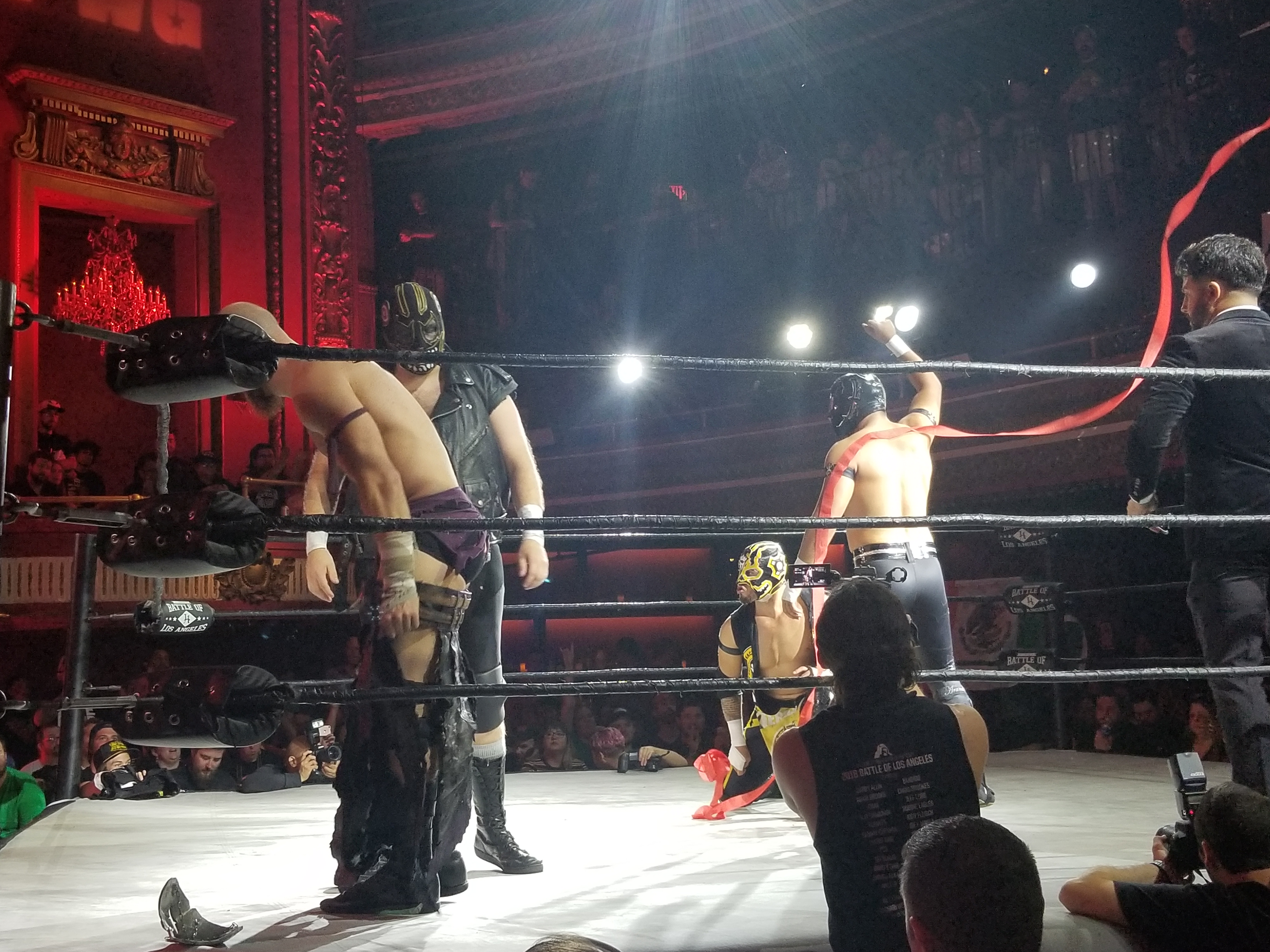 –Dark Order (Evil Uno & Stu Grayson) vs. Rey Horus & Aramis. – I don’t know if it was the sugar free redbull or the fact I got to get my head straight from intermission, but I had about 6 or 7 zingers that just had the crowd around me laughing. I mean, the Dork Odor’s Evil Uno does look like the nameless/faceless end boss from WCW vs. The World, and all four of these men should have come down the aisle to Whiz Khalifa’s “Black and Yellow”, among other such stupid things. It was no laughing matter in the ring though, as the newly formed lucha team-up of Horus and the 19-year old Aramis had no problem covering for Aussie Open (due to Dunkzilla’s torn quad), and they wound up involved in arguably the best tag-match of the weekend. The Dark Order are actually quite a great team, but they got nowhere near the reaction this time as they did at the recent Anniversary show; maybe it’s the way the former Super Smash Bros have been received in AEW. Still, both guys were fantastic and beat the scrappy, impressive luchas with a variety of outstanding double team moves leading to the Fatality finish. – 3.5-3.75/5 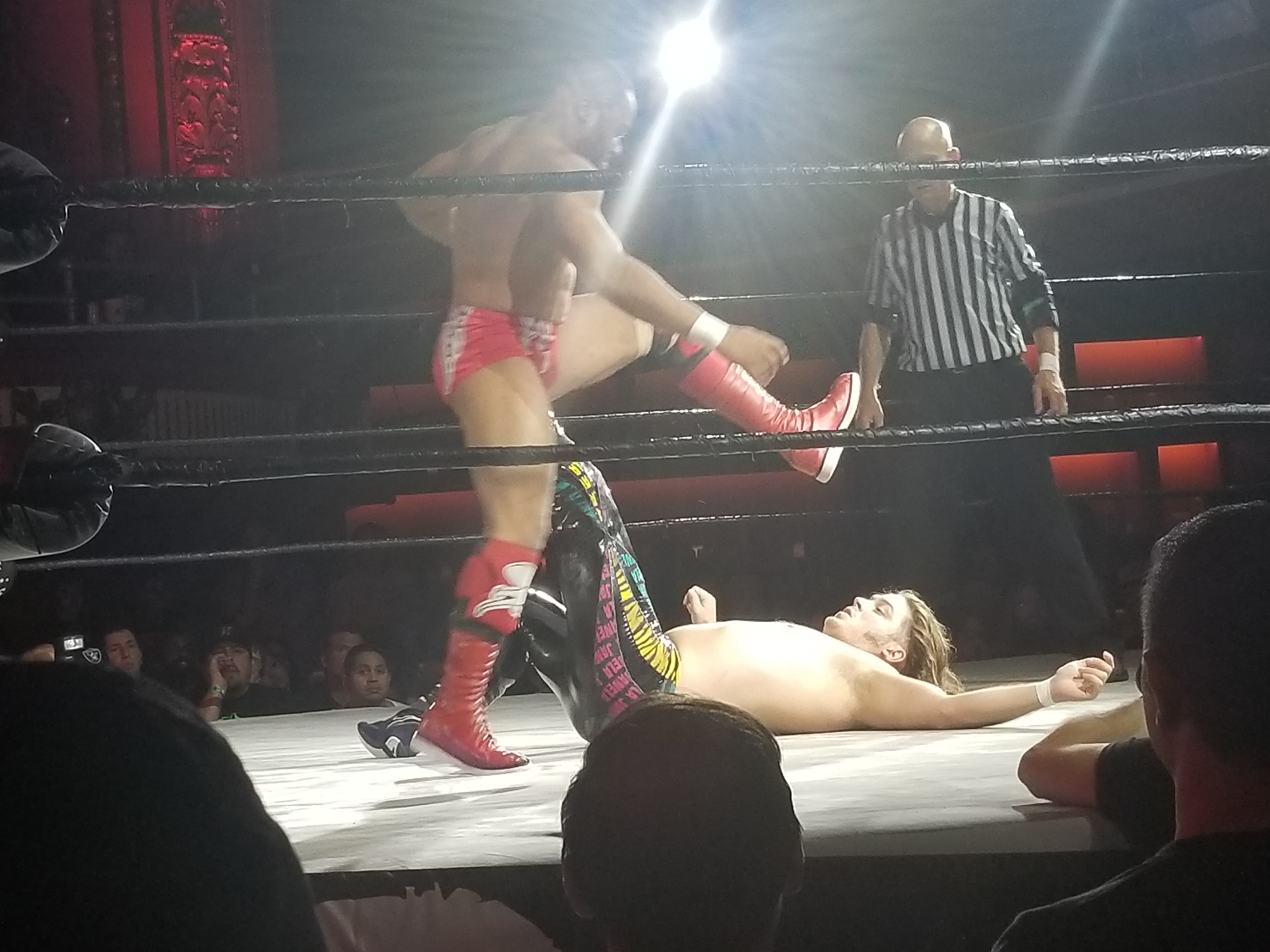 –BOLA – Semi Finals: Jonathan Gresham vs. Joey Janela – Solid 8-minute match that saw Janela’s pile of chairs backfire with Joey taking an Octopus suplex on top of them before giving way to the Octopus stretch. Good, but forgettable. – 3.25/5 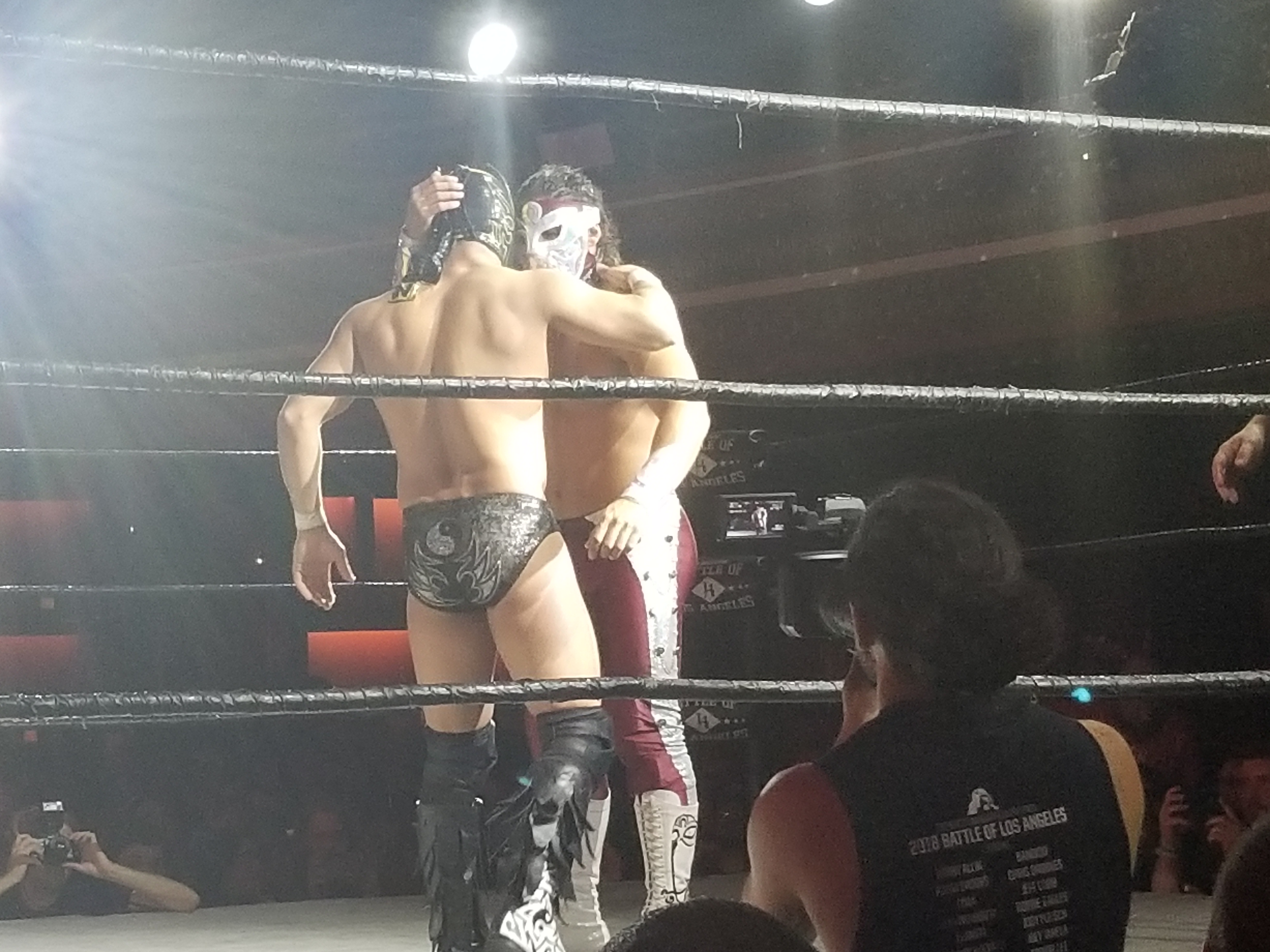 –BOLA – Semi Finals: Bandido vs. Dragon Lee – Crazy, wild match. But were you expecting something less? Two of the best lucha guys on the planet had a hell of a match, many say the match of the tournament, if not PWG singles MOTY. While I wasn’t as into it as the opener (drinking 5 beers before a 5-hour show can do that to you), both shared some wild power moves (torture rack GTS, apron powerbomb, spanish fly, Mexican destroyer, etc.), before an array of memorable spots. And my fuckin’ lord did Bandido’s top rope moonsault onto Dragon on the outside nearly hit the balcony. Christ. Bandido finished the 2018 King of the Indies winner with a springboard german suplex into a pinning german suplex. Awesome stuff. – 4.25-4.5/5 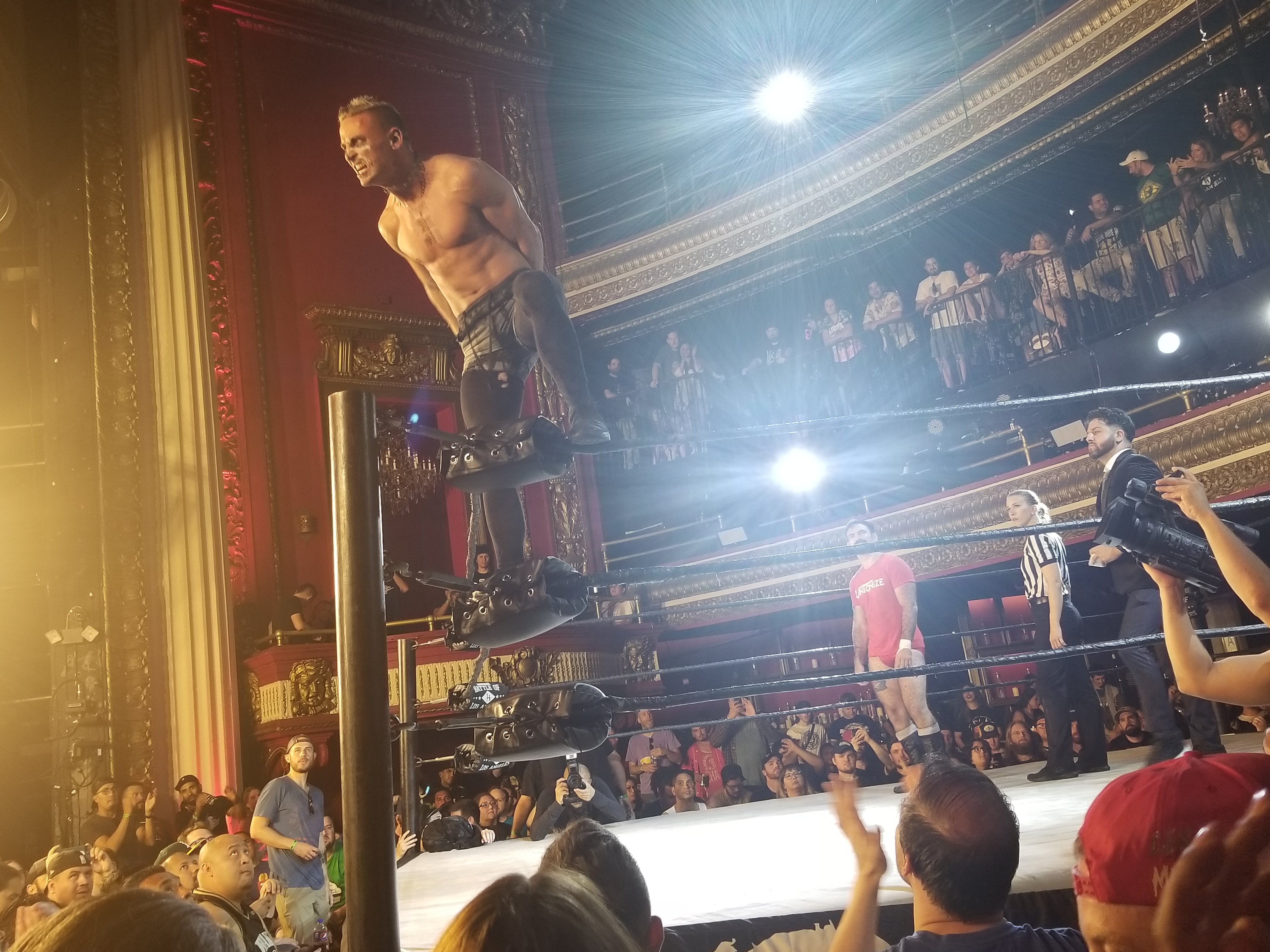 –BOLA – Semi Finals: David Starr vs. Darby Allin – While there were no squashes in this year’s BOLA, many of us were practically waiting for one (see Cobb vs. Lee last year) and this was the closest thing to it. Starr and Allin still went 5+. The result also capped off the hilarious removal of all AEW talent from BOLA. Guess they all got their swansong with tonight’s tournament, now, eh?  Before Starr moved onto the finals (as he predicted) via lariat, he caught a Coffin Drop into his sig shoulderbreaker. Hell of a spot. – 3/5 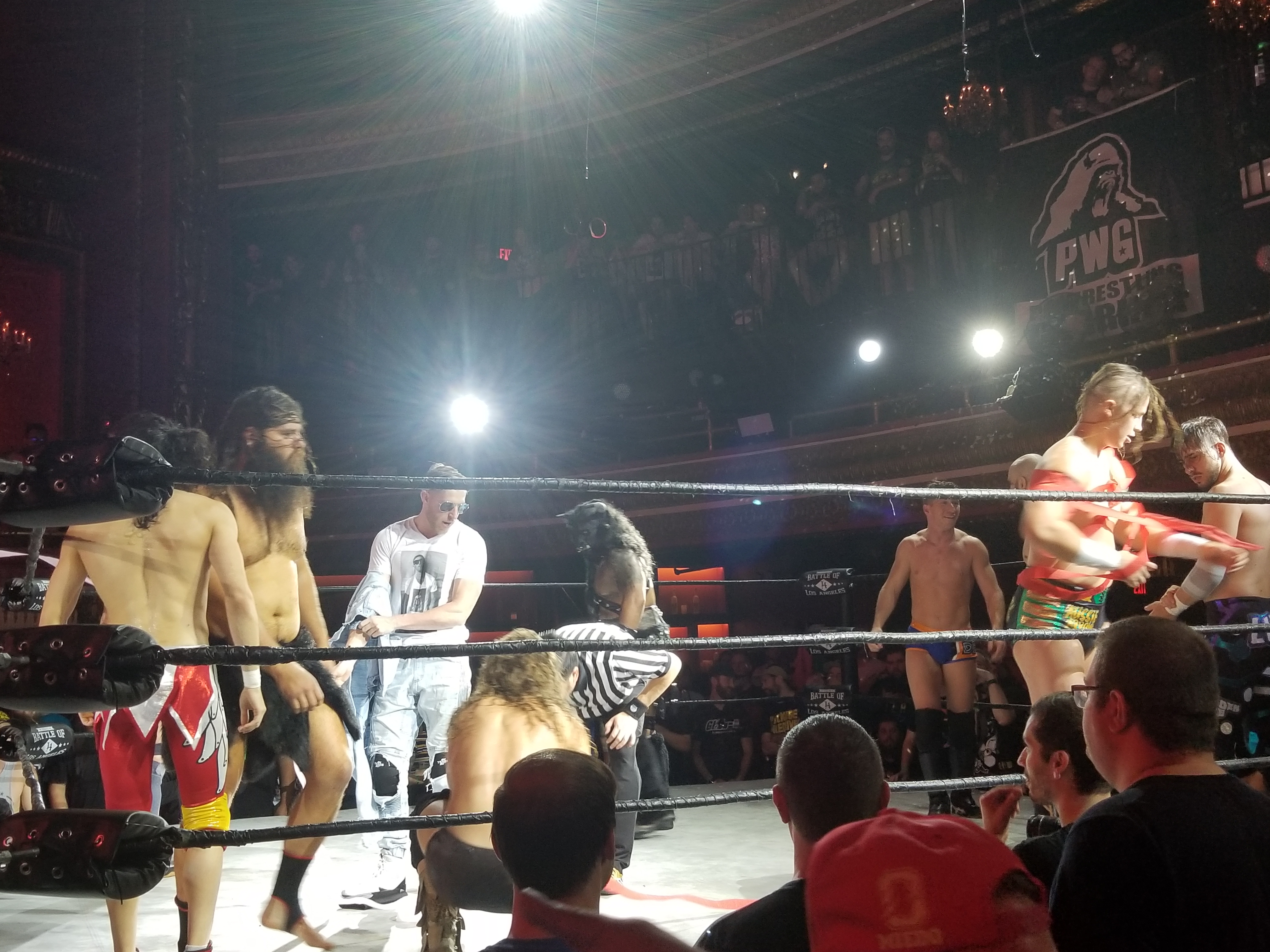 –Caveman Ugg, Orange Cassidy, Jungle Boy, Artemis Spencer, & Paris DeSilva vs. Mick Moretti, Lucky Kid, Tony Deppen, Black Taurus, & Kyle Fletcher – This began as one of the absolute dumbest and shittiest matches I had ever seen live.. for about 5-7 minutes until things got wild, got funny, got wild funny and just killed shit for the next eighteen. I actually had no idea this went 25 until I went over the results just before this review. That’s kudos to 8 of BOLA‘s “job squad”, with Fletcher hopping in due to Aussie Open being replaced in the tag and PWG newcomer Paris DeSilva also taking up the other spot from Rey or Aramis. At first glance, Paris is a joke. This little shit is almost smaller than Marko Stunt. But HOLY FUCK did this guy do things, none wilder than a shooting star DDT. Yes, read that again. Not surprisingly, this also became the Orange Cassidy show, and at one point every one of his teammates got in on the fun and donned the shades. But nothin’ was wilder than OC leapin’ “Freshly Squeezed” from the balcony on top of them all!!! The fucker landed without a scratch, sunglasses still on the moneymaker, to boot. If that wasn’t enough, the match also witnessed a Caveman vs. a Bull, 10 million dives, incredible character work, a funny Lucky Kid and always nutty Tony Deppen. Even Arty Spencer who looked kinda guck in his match with Gresham in the first round was an immediatr stand-out. This 10-man mayhem thing wound up a Gaga Classic. Bar none. – 3.75/5 (Comedy/High-Spots = 4.75/5, Wrestling/Logic = 2… who cares!!!) 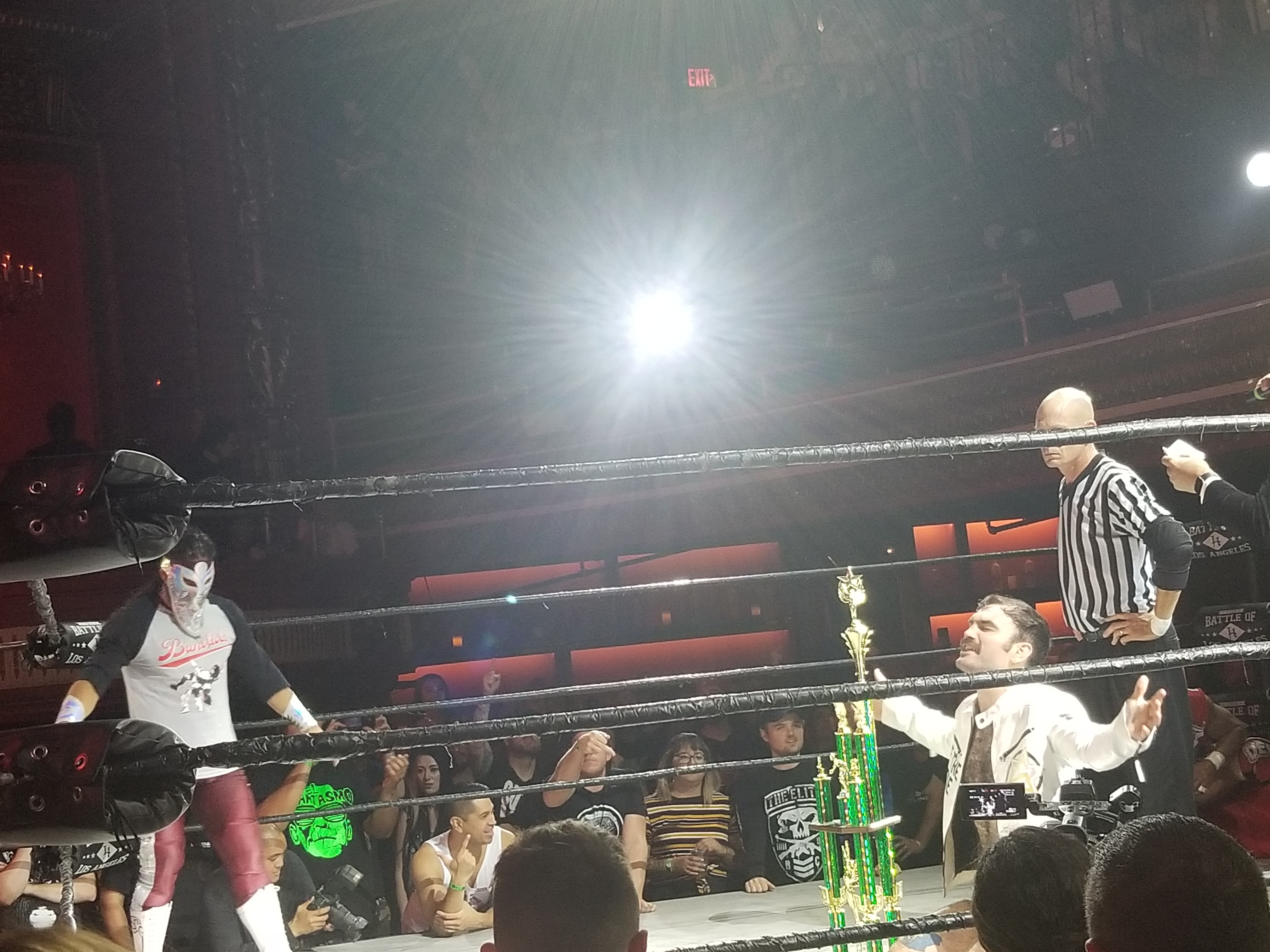 –BOLA – Finals: Bandido vs. David Starr vs. Jonathan Gresham – I really loved David Starr in this match. And since I mentioned earlier that — going by the New Japan a.k.a. realistic/normal booking — David, having beaten Cobb earlier in the night, didn’t need to win BOLA to get a title shot, his removal at the 15-minute mark of the 23+ total wound up the right decision. Unlike Shingo, who was sort of an afterthought in last year’s BOLA finals (not going nearly as long as Starr), David’s personality dominated the Finale’s first portion. He got over in the loss, despite the pummeling he took from Gresham. Now this built the Octopus into a powerhouse, having his back against the wall against last year’s finalist Bandido. They’d go another nine in very good, albeit unspectacular fashion. But that’s OK. Bandido hit the 21-Plex to get the win, and overcame several submission attempts and nearfalls that had the mostly pro-Bandido crowd gasping. If you take a look back at the young lucha’s last year and half of PWG dominance, no one deserved this trophy more. – 3.75/5 (Triple Threat = 4/5, Gresham vs. Bandido = 3.5/5) 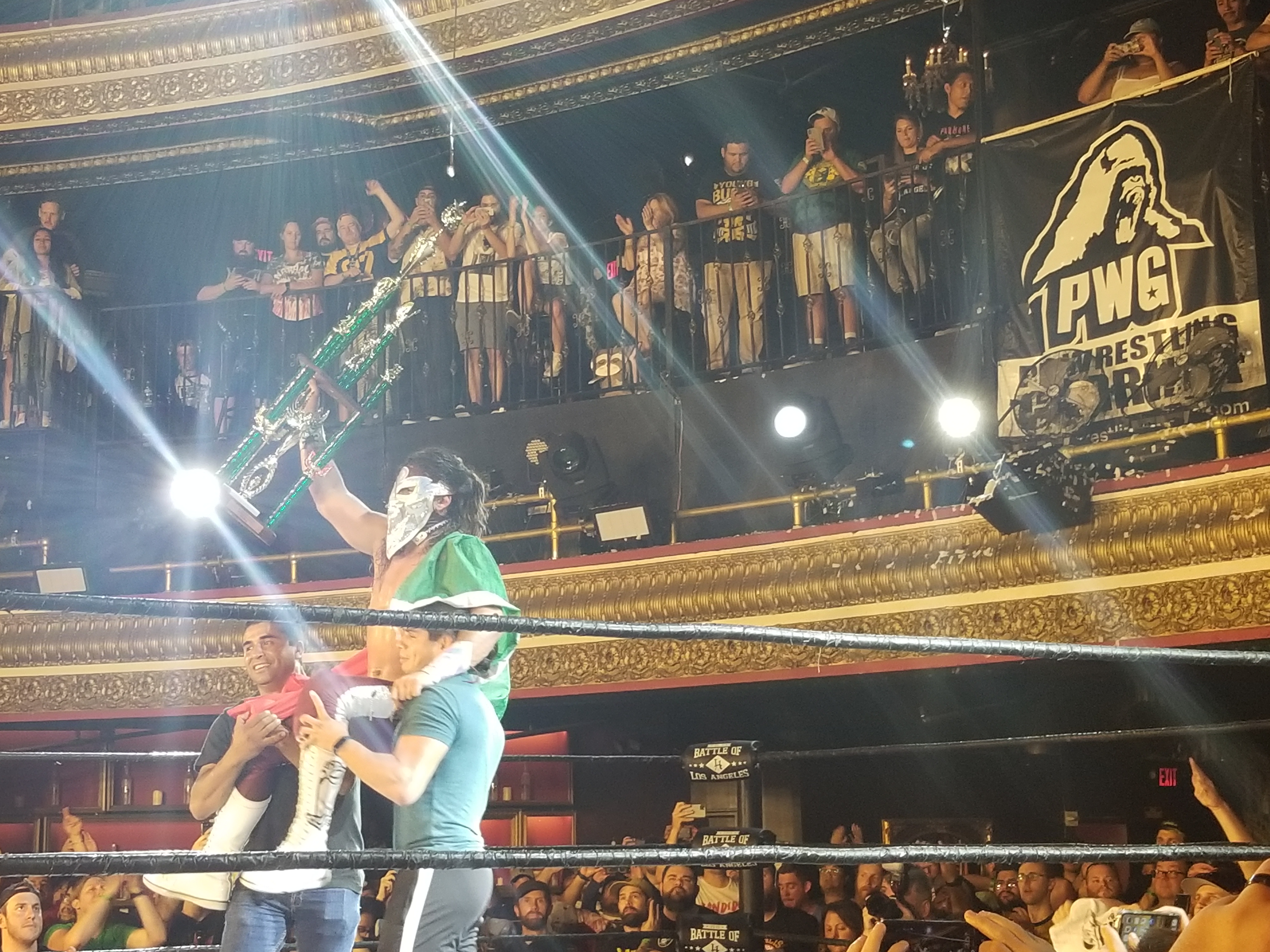 Night 3 of BOLA 2019 was awesome. It had a lot to live up to with 2018’s classic final night of the Battle of Los Angeles, the first one ever at The Globe Theatre, and despite the immense talent shift in PWG (and all over the world in countless promotions), they did an outstanding job this year. The booking was fantastic. For a while I had all the big guys in there, then all the luchas, then it wound up David Starr and a pair of ROH guys. Still, it was the right move. While Gresham looks to be sticking with ROH only in the near future, both Bandido and Starr don’t seem to be going away from PWG anytime soon and their inevitable confrontation is something that nowww most of us want to see. Throw in Cobb and his matches with King and Starr and a possible redemption story for Bandido with Cobb and we’ve got some top main events coming to Pro Wrestling Guerilla. 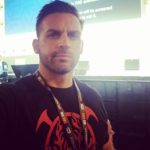 The influx of bizarre and ultra talented GCW and new overseas talent has also softened the blow of guys leaving for NXT (and now AEW), and if this was the last time we saw the Lucha Bros, Janela, Allin and Dragon Lee in this tournament then at least they went out in style. The Rascalz and Dark Order seem destined for a PWG Tag Title classic, and keep your eye out on Jake Atlas, who had to be the biggest breakout star of the tournament. To me, no one else came close to stealing the show besides the reigning MVP, of course, Joe the Sleeping Drunk.

Special thanks to El Magico @kureijibunny on Twitter for the dope featured image!