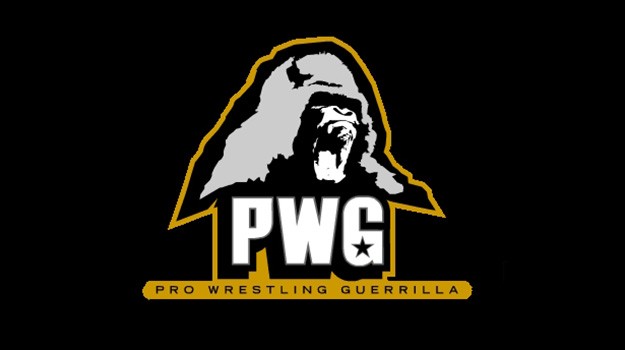 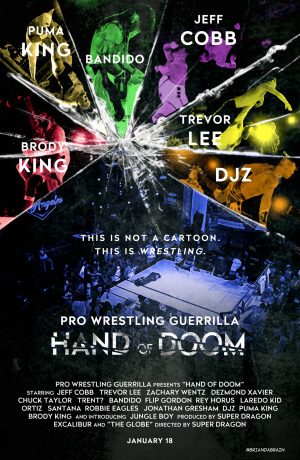 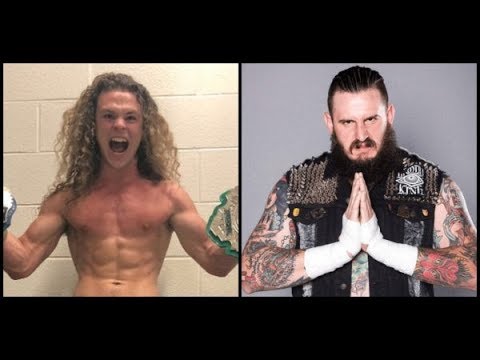 –Brody King v Jungle Boy – This was a fun and solid David v. Goliath match, sort of if 1-2-3 Kid already had his X-Pac skillset going up against Razor. Crowd was way over for the Son of Luke Perry and his athleticism impressed. It’s not hard to see why there are rumors of AEW wanting him already. King was excellent too, finishing the Boy with a pair of devastating sit-down piledriver (the second one was more like a Tombstone/Crusher). Crowd was super into this. #KingOfTheJungle – 3.25/5 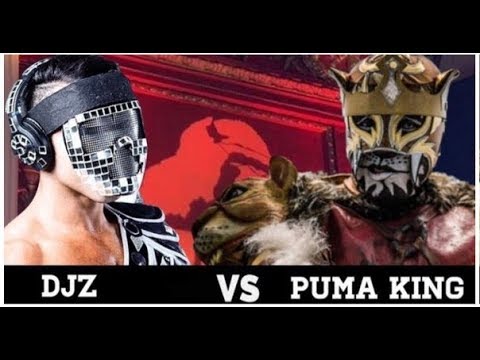 –Puma King v DJ Z – The fun continued. Both guys were way over, splitting the crowd in half. DJ Z is a master innovator and sometimes his “DJ” horn gimmick and slip-ups can cause him to be overlooked. Puma was a great opponent for him, terrific at reversals and pouncing around DJ’s flying. Lots of dives into the crowd. Super fun, and Puma finished off Z with a stretch muffler. – 3.5/5 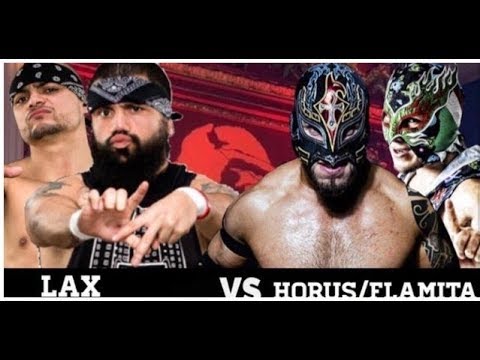 –LAX v Laredo Kid & Rey Horus – Laredo replaced Flamita. It was off to a pretty rough start, as even the great LAX seemed confused out there. But once the high spots started kicking in the PWG faithful went nuts. Horus was the star here, at one time executing a picture perfect flying hurricarana onto the apron that flew Santana into Ortiz. Laredo followed with an amazing springboard moonsault. LAX got the better of the luchas once they got their shit together. This wound up good despite the early hiccups. To quote my friend Andrew, “a fun mess” if you will. – 3.25/5 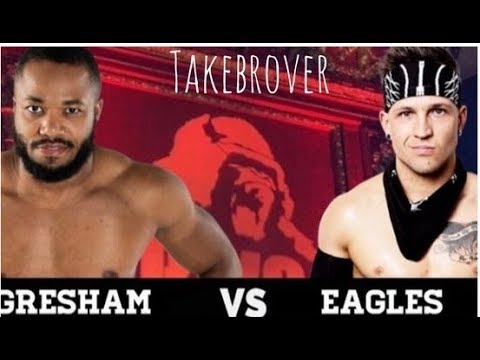 –Robbie Eagles v Jonathan Gresham – There was some masterful wrestling here, as expected. Robbie matches technical wits with, in my not-so-humble opinion, the best ring technician not named Zack Sabre Jr. So much goodness here, including a wild Octopus Roll from “The Octopus” himself. This match had everything and even a somewhat anticlimactic finish — Eagles’ modified figure-four submission on Gresham — couldn’t ruin it. The finish makes sense if Robbie has more dates coming at PWG and they want to make him a killer. That said, I wished Eagles used more of his bad-ass Bullet Club persona here, and jumped Jonathan after the match.. but whatever. There aren’t really any angles at PWG. – 3.75/5 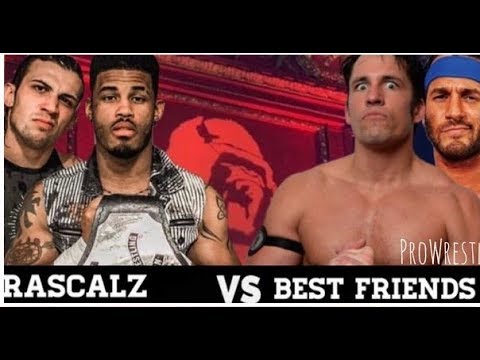 –PWG Tag Team Championship: The Rascalz (Dezmond Xavier & Zachary Wentz) v Chuckie T & Trent Beretta – Two of the most popular tag teams in the business got it on and the fans, who’ve been huge supporters of the Rascalz here at The Globe in 2018, were all about the Best Friends. Chuckie wasn’t so much the whack-job he’s been in New Japan, but he and Trent def had some issues. Lots of comedy here, but it never seemed to ruin the goods. This one was almost Lucha rules, with fast tags and lots of action. Rascalz really weren’t at their most dynamic, working more solid than spectacular spots — which makes sense if you consider the much bigger size of the BF than the teams Xavier and Wentz have been working with (LAX, Bucks, Lucha Bros). But that “Hot Fire Flame” assisted moonsault over Chuckie on Beretta tho!! What an amazing finish. – 3.5/5 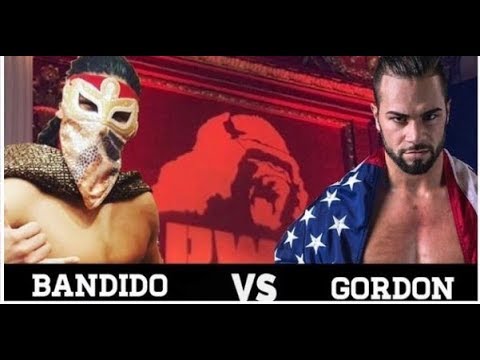 –Bandido v ACH – Despite Flip’s absence, this was arguably the hottest match on the entire show. Since Bandido is so over at PWG, the AAW stud decided, like, a minute into the match to turn heel and his performance as a baddie was nothing short of amazing. I’ve never seen ACH work heel before (I missed all his pre-2014 PWG stuff), and was completely blown away. There were moments in the match where the man from the Planet Vegeta toyed with Bandido and performed several classic and super hilarious WWE pin attempts, mocking Stone Cold, Undertaker and others in the process. There were a pair of huge payoffs here too, with Bandido “Stunning” ACH outta nowhere and ACH later hitting the classic Steve Austin pointed elbow drop. The new ROH signee would later hit his signature springboard german on ACH, who is expected to sign with NXT. – 3.5-3.75/5 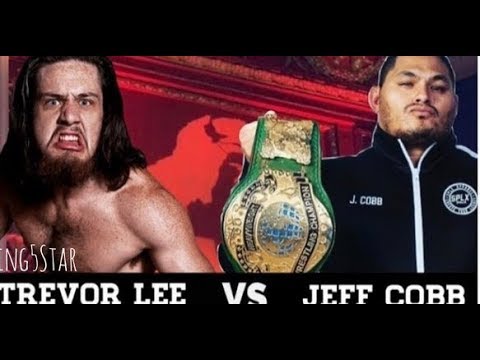 –Pro Wrestling Guerrilla Championship: Jeff Cobb v Trevor Lee – Following Flip’s replacement ACH working heel, this one saw Trevor Lee — of all people! — working babyface. It was completely bizarre. And, of course, it didn’t last. It was somewhat of a brilliant angle for Lee to work going into his last match with the company, as the Carolina Caveman left everything out there on the mat last night. And I mean everything. With Cobb, the monster goodguy champ, Lee felt compelled to perform several babyface-esque highspots, tons of dives and moonsaults. He almost cracked his head on the wood floor following one of them. Even when Lee had an opportunity to go back to his usual, great heelish ways during a ref tie-up, he didn’t, and instead took out Justin the most hated ref in the business! You couldn’t do a more babyface thing than fuck Justin up.

But once Superdragon sent another ref to assist the main event, Lee’s true colors arrived. Mind you, this was mostly a one-side affair with Lee taking all the heat from Cobb; part of the crowd tried to come together and support a main event that lacked the fire of the recent WALTER stuff. That’s impossible to follow, with Cobb the Joe Coffey to Lee’s Pete Dunne (see: UK Championship from about a week ago). But Lee’s performance and late “Big Show in-match heel turn” raised the stakes and the PWG faithful wound up with a terrific last 8-10 minutes. Following a well-timed Tour of the Islands after a scintillating few minutes of false finishes, Lee thanked everyone for their support and vowed to return and win BOLA and the PWG title once the WWE fires his ass. Not a great match by any means, but I’m rewarding the effort of PWG’s last great heel. – 3.5/5

PWG’s first event since BOLA was strong and consistent. The Los Angeles independent wrestling hotbed is goin through a transition phase — as is the entire industry, really — seeing many of its main players head to WWE (NXT and NXT UK), AEW, and ROH (and who knows how long this relationship will last?). That said, you can always expect a hot, receptive crowd even if the night is a rare non sell-out, with lots of great in-ring work and fun all around. Guys can come and go, but that’s nothing new to Pro Wrestling Guerilla; just look at the current roster of NXT. It’ll be interesting to see where the company searches for talent next, but you can expect I’ll be there to cover all the goods regardless. Oh, and can we get the Calamari Catch Kings vs. The Rascalz at the next one?