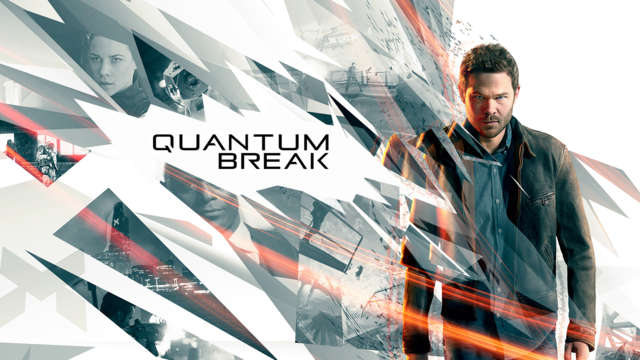 Ironically, we’re late to review a game that revolves around time. But that’s OK–GHG knows you don’t mind, seeing how the famed Max Payne/Alan Wake developers, Remedy, have already made you wait long enough…

But is this union between AAA video game and Netflix-styled TV series worth the wait, hype, and ambition? Well, that will all depend on how many times you are willing to replay the game, seeing how Quantum Break‘s critical act-end options determine several varying storyline scenarios. Although it was difficult to see just how different the end game wound wind up after my first go-around (at 91% completion, mind you), there’s no doubt the action is frantic and signature enough to justify multiple playthroughs.

More importantly than the gameplay, arguably, is Quantum Break‘s story. It’s pretty damn good. The TV show side of it is excellent, too — a surprise perhaps — with recognizable actors who, despite the game/show’s wonky format, deliver admirable performances. You can tell nothing here was “phoned in”. Science and physics fiends will eat it up (even if it’s just to denounce any of the quantum theory’s probability), while more casual gameplayers might not care so much about all of the Matrix mumbo jumbo/personal data found on leftover laptops, charts, and diagrams. Nobody at the Monarch Corporation was careful about their goods, apparently.

What’s especially nice about the plot is that it opens up with friends, Jack Joyce (X-Men‘s Shawn “Bobby Drake” Ashmore) and Paul Serene (The Wire and Game of Thrones‘s Aidan “Littlefinger” Gillen), who only beef when a time invention/experiment goes horribly wrong — and one decides to semi-twirl his “mustache” for the greater good of.. SCIENCE! This disaster gives both Jack and Paul some sweet time-altering gifts/curses, which consequentially hand players up a rivetting, yet repetitive way to take down foes. Imagine Max Payne‘s cover-based third person meeting Watch_Dogs, replacing environment disruption for time. Often, enemies (and other NPCs) will freeze when you do nothing; and others, far more readied and su[it]per-powered, will not flinch until you do.

If you’re curious, the powers play a bit similar to the “god mode” heights of Saints Row IV; yet, to Remedy’s defense — despite the heightened sense of the fantastically surreal — these superpowers are more grounded in reality, perhaps an ode to just how solid the four 30-minute episodes are in between the five major acts. Like “fuck–this could happen!” Just imagine a giant mash-up between The Flash/Nightcrawler/The Punisher/Invisible Woman/Kyle Rayner. That’s a lot of dashing, teleporting, bullet-popping, bubble-trapping, and time-freezing. Sway!

While the combat, particularly when combined, is all as cool as it sounds, it would have been far better to slow-roll introducing Jack to all of this power from the get. It’s a surprise he doesn’t turn mad himself. Also, despite the lethal power cooldowns, the control somehow feels more button-mashy and less strategic than it should; while some enemies will be immune to your more basic actions (which can all be leveled-up with time-ripple points) and improve their intelligence and technique in the game’s 4th quarter, most of the time it feels like Jack is just freezing and shooting stuff.

Players hooked on Quantum Break‘s innovative combat should be just as impressed by its visuals, however, despite much of the environments going by your standard, “herewegoagain” office/lab/hallway/parking garage (see: Goldeneye, Splinter Cell) tropes. The more time-rippling the storyline progresses, the more the funkdafied, flourescent sectors will impress you. They’re glitchy as fuck–in a good way! When you kill enemies they wind up trapped in the air, legs dangling, blood floating for french fries. It’s apparent that Remedy put a lot more thought into how objects would be affected by all the time-fuckery than physical weight of the protagonist’s actions; so seeing upside-down company trucks reverse-smashing against the wall in the most seemingly “game-breaking” of ways makes up for the otherwise bland environs and mindless cover-and-bullet-capping. And character model detail reflects the actors so much it’s sometimes hard to differentiate between the game and the show (Fringe‘s Lance Reddick and The Lord of the Rings‘ Dominic Monaghan are excellent, too!).

It’s not easy to sum up this Xbox One/Windows 10 exclusive, but I’ll do my Moody best: Quantum Break is a solid-shooter with some innovative combat, and intriguing story that — without a doubt — accomplishes what it sets out to do. While this tagline doesn’t necessarily equate to Game of the Year status, it should remind players that sometimes “getting it all right the first time” is not of the most importance. QB is, by far, the most impressive junction of video games and television; and succeeds at giving curious players a new measure at blending two entertainment mediums.