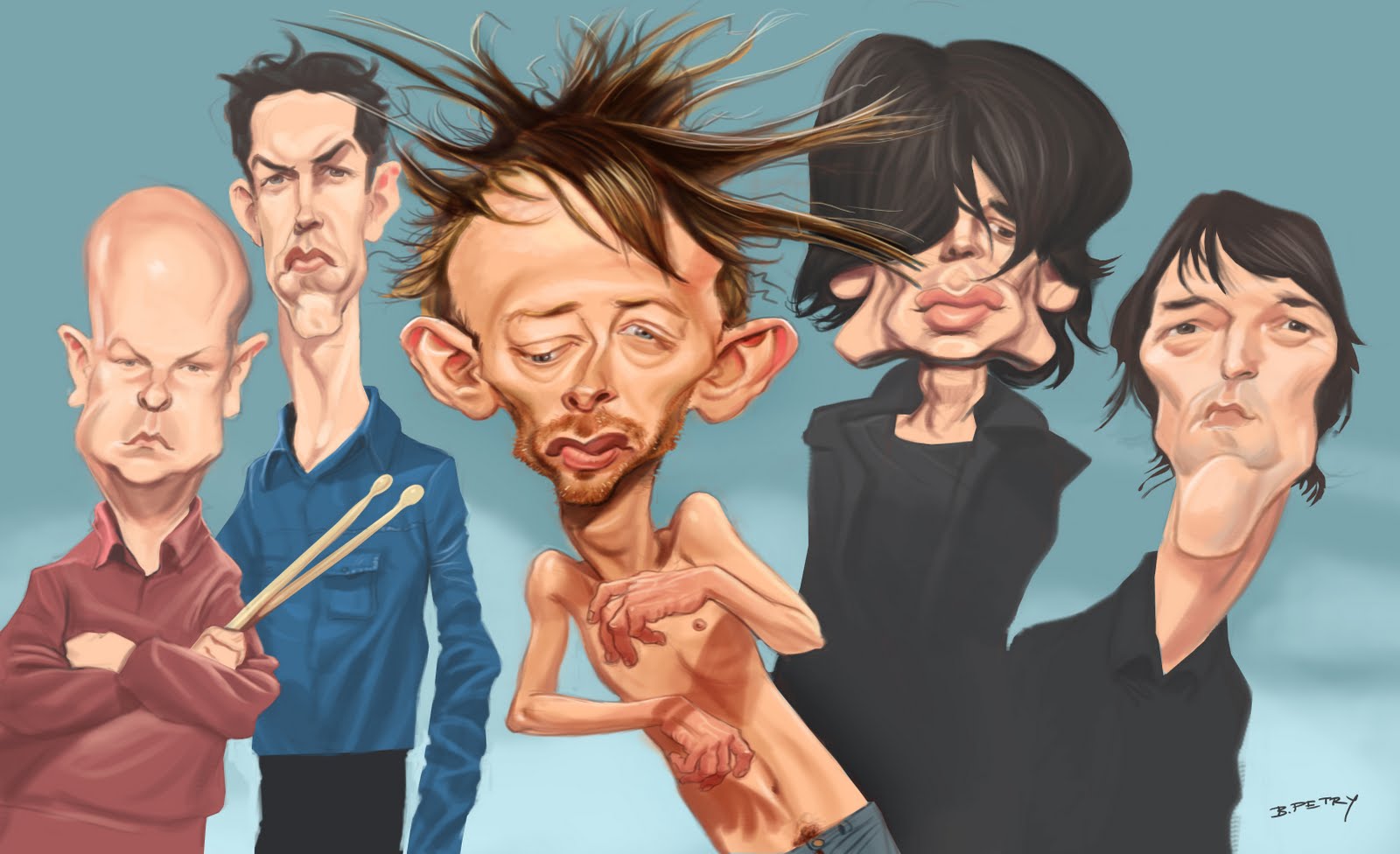 I’ve listened to A Moon Shaped Pool five times now in order to write this review, and much like that fifth listening I kinda want to just get this over with.

That sounds harsh, I know. I’m vexed right now. Not because of this album, but I’m just not in the mood to mince words. I already know no matter what I write, given my opinion, most people are going to read this as a bad review of a glorious album–so it doesn’t matter anyway. I don’t think I’m fit to write this. I don’t even know why I agreed to write this, other than it’s Radiohead and my knee-jerk reaction was “Ooh, Me! Me! I wanna!” So, I’m sitting here wondering whether I’m using too many commas, or any other outdated grammar mistakes I don’t really buy into because I’m not really a writer. But here goes my passage into the Radiohead Nerd Bible…

I’ve been a huge ‘Head for about half my life. A friend gave me a copy of The Bends right around the time I met my ex-wife. And that’s a major theme on this album. A relationship that lasts for your whole adult life suddenly ending can leave you floating in space, unsure of which direction leads to a life-sustaining planet. The small whimpers of hope come and fade just as quickly. And you can be lost for a while, traveling down long corridors to dead-ends. You retrace your steps back to where it all went wrong so many times the path can be worn in your mind like grooves in a record. You still never end up knowing for sure if it could be saved, and inevitably reach a point where your mind softly cries for this to not be the truth. Now I’m wondering whether I’ve used too many hyphenated words.

A Moon Shaped Pool/A Pool Shaped Moon (both titles make as much sense, really) starts off strong with the songs we’ve already heard, two of which have already been made into music videos (“Burn the Witch” and “Daydreaming”). The second thing I noticed, apart from the “The” in the track title “The Numbers”, is that tracks appear in alphabetical order. It’s as if the band gave up on this album and decided to just put it out as it was when it was abandoned in the mixing stage. And that’s my first gripe with A Pool Shaped Moon. It’s like a puzzle with just a few pieces missing. But those pieces are what’s keeping you from sorting out the image. Even The King Of Limbs (an album that I mostly liked, but in some places seemed experimental for the sake of being experimental) has these moments where the songs reach a crescendo of chaos and passion that give way to a driven clarity that leads to a satisfying end. Like an intense orgasm followed by a moment of clarity, these moments make Radiohead albums for me. But this is wholly missing from A Pool Shaped Moon.

These moments are teased, sometimes almost promised by the music’s progression, but they just don’t come. Instead, right when you think the music will reach those lofty heights, they just wind down to a flaccid end. Or in the case of “Indentikit”, just end abruptly. And that’s what makes me never want to listen to this album again. I wouldn’t argue against putting it on if I were riding in the passenger seat of a friend’s car, but I don’t think I’d ever suggest it.

The preview of “Burn The Witch”–prior to its release–promised so much. Maybe this was going to be a more abstract Hail To The Thief, or In Rainbows. AMSP was one of three albums that I have been looking forward to this year, and while it didn’t grossly dissapoint, it just didn’t deliver on any of those promises. It is objectively a good album. And that’s why some may say I’m unfair with this review, as perhaps I’m criticizing it too harshly. It is not a bad album. But Radiohead has never been measured but just “Good” or “Not Bad.” Their releases have been measured in levels of greatness since The Bends. And this album does not measure up to greatness.

In the lyrics, it’s hit or miss as well. While I can certainly relate to everything that thematically refers to his relationship’s end, no not all of it strikes me the way Thom Yorke‘s lyrics usually do. The lyrics always had this profound magic of how the words sounded being more important than their meaning. When the lyrics achieve this in fleeting moments they are great; but they do so rarely on this album, and when Thom is trying to make a point about our modern society in “Burn The Witch”, or an environmental message in “The Numbers”, they are so on the nose. There is absolutely no abstraction between the words and their meanings in those places and it drags an already questionable album down. And then, finally, Moon ends in a whimpered take on one of my favorite Radiohead tracks. “True Love Waits” should have been given the album treatment that “Nude” was on In Rainbows, but, instead, we’re treated to a song that is bereft of passion. But I get it, and that’s the other reason I don’t really care to listen to this album again for a very long time, if ever.

The end of Thom’s relationship overshadows this whole album. But I’ve been there, and fairly recently. I know how that sort of thing can have a devastating effect on creative work. Maybe I don’t much care for it because I don’t want to go back there. I don’t care to revisit those emotionally exhausted days and nights. However, I am eager to hear what they do next. Because I know what kind of creative resurgence comes when you’ve reached the other side of Chapel Perilous. When the dark night of the soul gives way to a glorious dawn it can be like newfound life. Til then…

It should be no surprise that Aesop Rock, here, with his 7th studio album, goes in at it alone. It’s named The Impossible Kid, after all. Entirely self-produced with no features (bonus tracks aside), and more interestingly written in a barn, the LP is also Aes Rock’s most pensive. Two tracks stand out as the New York-to-San-Francisco resident’s most personal journals. “Blood Sandwich” turns an otherwise poignant — strangely straightforward — reflection of his brothers into a fantasy tale of homicide (his little bro’s Little League coach squashes an intruding rodent) and suicide (his older bro almost “ends it all” at a Ministry show), while “Get Out of the Car” is a personal dedication to late MHZ emcee, Camu Tao, that perhaps laid result in the seclusive writing for the album (“Into the woods go his alien tongue/ It was that or a textbook faking of funk — and I can’t”).

But what makes the emcee’s level of introspection different on The Impossible Kid than the usual brooding of the past (see: Float) is Aesop Rock’s newfound enthusiasm. Have we ever witnessed the former Def Jux-now-RhymeSayers artist display this much sheer energy into a track, like “Mystery Fish”? In addition to the brunt of Aesop Rock’s stilted, often second-person conversations (“you’re dreaming of Arcadia, you’re feeling like a baby tooth/ Awaiting panacea, channeling your inner Beowulf”) the rapper seems to be having a lot more fun behind the boards, too.

Perhaps taking a cue off El-P’s graduation to a next-gen synergy with Run The Jewels, tracks like “Kirby”, “Waters Tower” and “Rabies” show a higher level of instrumental complexity, laced with drums that hit harder than anything on Bazooka Tooth or Skelethon (his other album with RS). But, being a popular geek culture site, there’s no better track to embrace than the appropriately named “Dorks”, which sees Aesop flummox rap noobs with his neverending veteran angst, painting lyrical abstraction in “a theater of jumping jellyfish, jealous little sycophants/ Miserable and flimsy from the skippies to the pissy pants/ Each one separately convinced they’re sketching with Da Vinci’s hands”, while claiming to have “floss[ed] the albatross like Daddy Kane with the chain/ I’m trying to jettison the ballast with the hazardous waste”. In 2016, it’s harder to find a more complete hip-hop album than these “Views” from The Impossible Kid. 4.75/5 Bibles.

Diggin’ In Tha Crates, better known as D.I.T.C., is a legendary hip-hop supergroup: O.C., Diamond D, Showbiz, A.G., Lord Finesse, Fat Joe & the late Big L. I could not believe I was given the opportunity to review their latest, D.I.T.C. Studios, a modern mixtape. Excuse me, what a modern mixtape should sound like: individually great in their own right. With their 2012 split thankfully not the end, “Not 4 Nothing” sees O.C. and A.G. — who, not surprisingly, take the brunt of the load on this project — along with Tay Bell, bring hip-hop to its knees with their latest lyrical journey.

This 15 track complilation album is paced with sniper precision. It hits hard, switches to a song that you would hear in a club, and then you get a track like “Make ‘Em So Proud (Hold Up)” with Fat Joe and Diamond D, bringing it home to Big L, taking you back to the hood in the next track. O.C.’s “Caviar Dreams” has an old-school hip-hop vibe that’s like a thought-provoking recipe with pinches of deeper issues, politics, Trayvon Martin, and JP Morgan. “Diggin’ Numbers” appears twice on the deluxe edition. You will want both. Other tracks feature Pharoahe Monch and production from Vinny Idol, DJ Premier and Showbiz. It should be noted that this compilation is ripe with #GeekSwag, with pop culture mentions that range from Call of Duty, Wolverine, Tetris and even Space Jam. East Coast brought it! 3.75/5 Bibles.