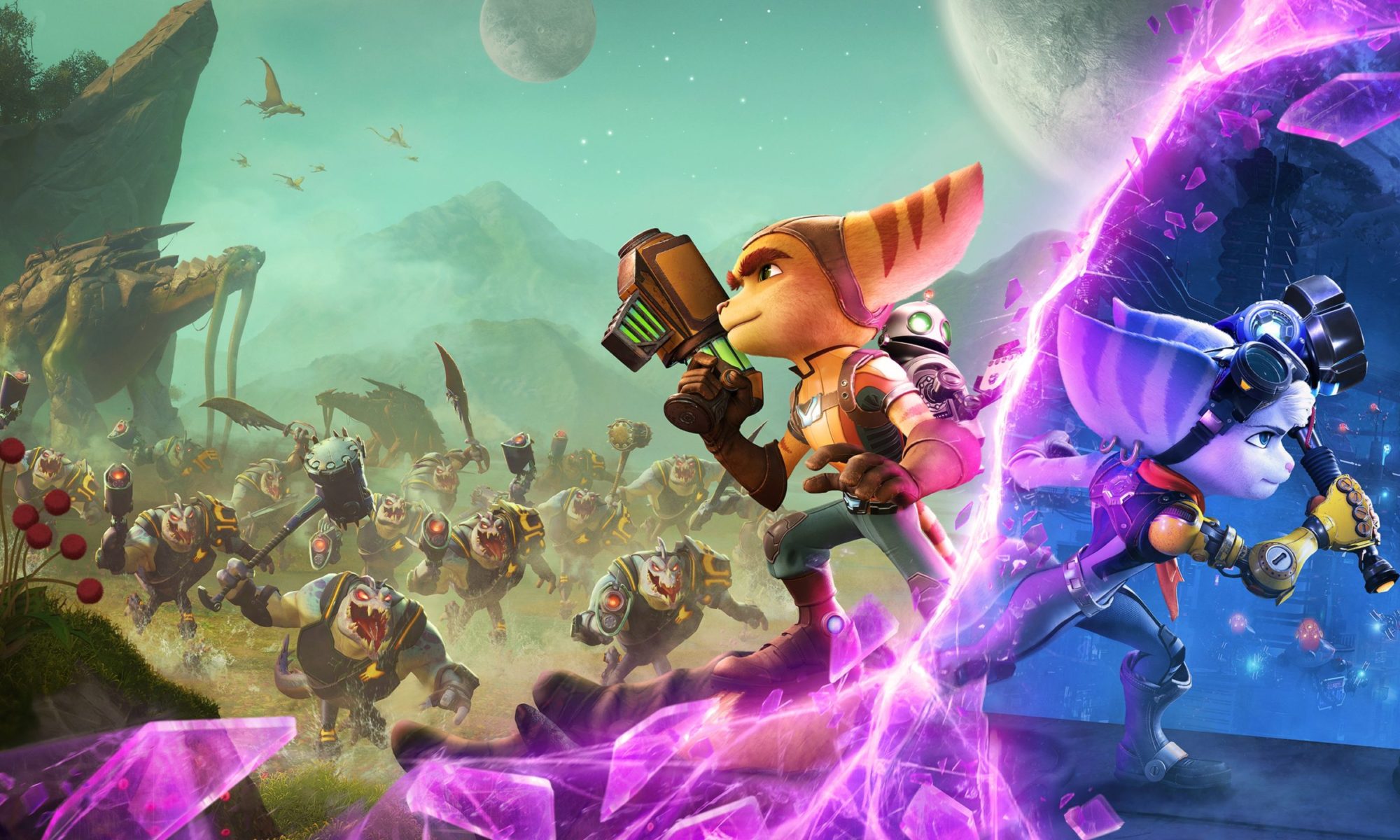 We’re halfway through 2021, and some of us lucky enough to get our hands on next-gen consoles have been eager to see the machines put to proper use and push new boundaries of how games look, feel, sound and play. I remember watching the reveal trailer for Insomniac Games’ Ratchet & Clank: Rift Apart almost a year ago (to this day) followed by the extended gameplay demo some months after, and thinking to myself that there would be no way the final game would match the visual splendor on display– akin to animated movies from the likes of Pixar and Dreamworks…

A nagging feeling also hit me that the dimensional rifts shown to instantly transport you between vast and different worlds were put into the game as a forced showcase of the much-hyped SSD drive of the PS5. I’m surprised and happy to say I was wrong: they play neatly right into the story and gameplay elements in Rift Apart. Having now rolled credits on this inter-dimensional roller-coaster adventure and snagged the Platinum Trophy in the process — on Rebel Agent difficulty in Performance RT — I’d love to share the experience I had in the approximately 14-16 hours it took me to finish the game (with added 2-3 hours for the Platinum).

Having no prior knowledge of the events from any of the previous games in the series, I caught up by watching a short recap on YouTube just in case I had missed some crucial information. From here on the story/gameplay elements were easy to get into even for a new player like myself.

While I won’t detail the story of Rift Apart to avoid any spoilers, the initial plot follows the duo of a furry Lombax named Ratchet and his robot companion, Clank. Their mission is to try and stop the series primary antagonist Dr. Nefarious (always an evil doctor, isn’t it?) as he tries to acquire a powerful dimensional-warping weapon called the Dimensionator so that he can claim the title of emperor of the universe. Sounds easy enough? Ratchet & Clank are joined by a new cast of female counterparts named Rivet and Kit (as well as reoccurring fan favorites) that make up an excellent ensemble of wacky and charming characters with each their own personality traits and flaws.

I also have to commend the stellar voice-over performances as well as superb animation and design that went into making the characters come alive on the screen. It really is a sight to behold with the fur and ray-traced eyes of Ratchet and Rivet standing out. In-game models also have squash and stretch applied to them when jumping, dashing, or getting shot which gives them a cartoonish look and feel previously mostly seen in animation movies.

When I first set foot in the metropolis of Corson V at the start of the game, all my senses were instantly bombarded by a beautiful and vast array of colors, flashing lights, billboards, and the busy traffic of space shuttles.. like something straight out of The Fifth Element. This same feeling followed me throughout the game as I hopped from planet to planet, each carefully crafted in great detail with lots of variation ranging from intergalactic cities to lush jungle and underwater worlds. Traveling between these locations is instant with no loading screen other than a short in-game cut-scene working as a transition to show you arriving at your location by spaceship.

Some of the transitions and cut-scenes in the game were done so well I found myself not being able to tell when a scene had ended and gameplay had started. You alter between playing as Ratchet and Rivet depending on which planet you go to but sadly there is no difference in how you play them, they have the same moves and weapons, a missed opportunity in my opinion.

No action game is complete without a wide array of enemies (aka cannon fodder) to shoot in the face. Some of these includes a great variation of robots, critters, mechanical pirates, space crocodiles (think Bebop and Rocksteady from TMNT), and blob-like creatures (Slimer from Ghostbusters says hi) the list goes on. They are all expertly animated; and during one fight with a grunthor, I ran behind him only for the grunthor to look between his legs to see where I went with a confused expression on his face, safe to assume it put a huge smile on my face. But what’s the point of having enemies if you can’t murder them in hilarious ways? This brings me to the most fun part of the whole game, the insane arsenal!

There are 20 wacky weapons in all, with the option to unlock special versions of them in NG+. My personal favorites were the trusty powerful shotgun called the Enforcer, the Pixelizer — which turns enemies into retro versions with added visual and sound effects, the Topiary Sprinkler covers targets in plants, freezing them into place, and lastly, Mr. Fungi fires a pod that turns into small companion funguses that attack and distract enemies while you figure out which one is gonna get it next. There are bigger and better weapons as well, with massive upgrade trees that could give you a good reason for a second play-through. With lots of weapons for everyone to find a favorite, just watching how each weapon affects their targets is quite the joy. Also, do yourself a favor and watch the previews of every weapon on offer for some hilarious commentary from Claptrap’s evil brother Zurkon Jr, you won’t regret it.

Lest we not forget, the Adaptive Triggers add secondary functions to weapons by the way of half and full press of the triggers. This seems to be the way games, in general, will handle adaptive triggers going forward and is a nice and intuitive way to solve design challenges from previous generations. Haptic feedback and 3D audio also add layers of immersion that make you feel your surroundings. Each footstep creates a small thump and when using the boost skate the left and right side of the controller gives off a slight rumble to match the skating, and a far away disco blasting music rumbles to the beat; try standing right outside the entrance to the disco in Corson V and slowly turn your camera 360 degrees around. Pretty neat, no?

The game also features side-quests, challenges, puzzles, and collectibles to break up the pacing between progressing the story. You can test your combat skills and take on varying challenges in the battle arena with a multitude of rewards that you can farm, perfect for when you need some extra raritatium or bolts to spend on your weapons. A visit to Zurkie’s bar where the arena resides is well worth it just so you can observe the patrons go about their business. Pocket dimensions act as jumping and platforming puzzles to earn some armor pieces that have stat bonuses which come in handy when you want to spice up your looks or want some added protection, XP boosts, etc.

Then there is Clank’s puzzle portions which reminded me of the shrines in Zelda: Breath of the Wild where you have to move and manage around objects with special attributes to unlock the several stages of the puzzle. Next up we have a cute little spider robot named Glitch that has to hack her way through obstacles and enemies as means to gain access to door panels or other electronic devices. As for collectibles, most of them were fairly easy to obtain just by using the map or keeping your eyes peeled for suspicious objects and paths that could lead you to them. The rewards for these collectibles range from armor sets, gadget skins, new game options, and photo mode among others.

The game was not without its issues and design flaws. During my play-through I experienced one game crash where I had to restart the game, a dialogue with an NPC was triggered twice, my character would sometimes get stuck in world objects or end up outside the play area, weapons suddenly would not fire and automatically switch to another weapon while still holding the previous one in your hands. But I’m happy that the few bugs experienced seem to have been fixed in a recent patch. As impressive as the technology behind the yellow teleporting rifts is, I found that I got slightly disoriented by the camera angle once you entered the other side.

My least favorite parts of the game were riding the slug or flying Trudi the dragon because of how clunky and unresponsive their controls were and how easy it was to crash into a wall and have to respawn at the last checkpoint. Something has to be said about the performance of the game which was nothing but flawless from start to finish. I didn’t experience one stutter, slowdown, or framerate drop — quite a feat when you consider the insane amount of particles, projectiles, explosions, objects, and other things on the screen at the same time.

All in all, I had a blast playing Ratchet & Clank: Rift Apart. It felt like playing a cartoon movie with well-written characters, as the Rivet and Kit backstory were epecially good. The game looks truly spectacular with visuals standing out in astonishing quality especially in HDR on an OLED display. In hindsight I would have played at a higher difficulty, having completed the game without dying from enemies more than a couple of times. There have been “GOTY contender” mentions already. And so far it is high up on my list with other games like Returnal, It Takes Two, and Resident Evil Village. We still have 6 more months to go but if anything is close to the fun I had playing Rift Apart then we’re all in for a hell of a year. 4.75/5 Whiskeys.