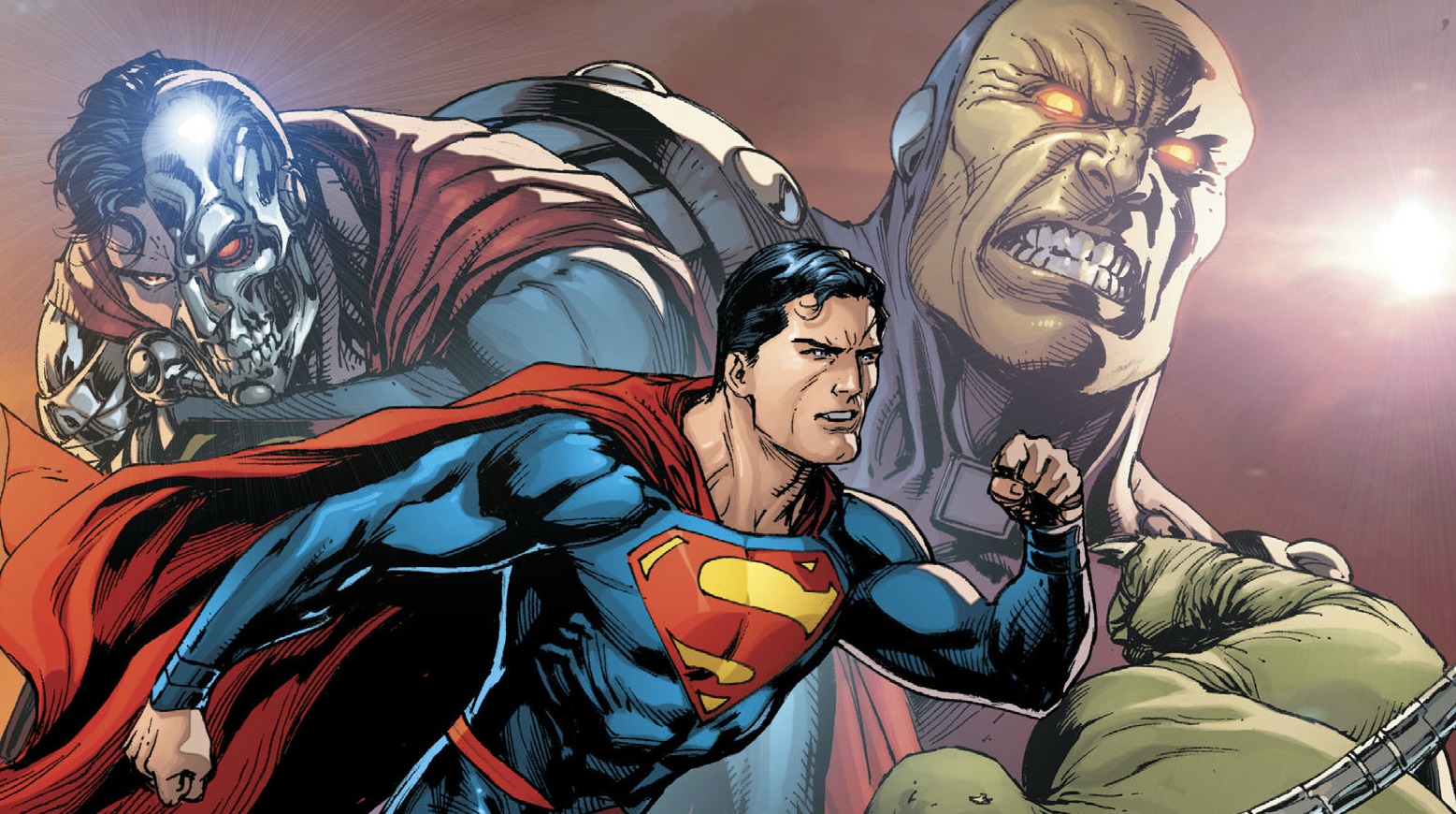 Greetings, fellow geeks. We’re hunkering down here on the East Coast getting ready for this storm to arrive. What better way to get snowed in than with some great new comic titles?! Thankfully, we’ve got some great writers here to take us through some upcoming titles– including something that might interest you Archer fans out there.

So let’s get a log on the fire, make some hot toddies, and dive right in…

Here, in the 2nd part of the crossover “Superman Reborn”, we find out who is pulling the strings behind the doppelganger Clark Kent in a spectacular fashion. I don’t want to spoil the surprise but, suffice it to say, it brings the Superman narrative closer to its classic roots than previous stories. I’m always a sucker for a good meta comic book story (like Grant Morrison’s Animal Man run) and kudos to Dan Jurgens (Booster Gold) for thinking outside of the box and being creative. I really enjoyed Doug (Green Lantern) Mahnke’s ominous artwork, especially in the last part of the story. It’s very bold and intricate.

After the reveal, Paul Dini pens a backstory called “The Man in the Purple Hat” that takes the fourth-wall breaking concept even further and explores the ramifications of it. Dini is always a fantastic storyteller and it’s always to see him contribute to modern comic runs. Ian Churchill’s art for this story was absolutely outstanding. There are scenes where characters from older iterations of Superman comics are discussed and he mimics the retro art perfectly. There are at least 5-6 different styles represented in this story. I didn’t see any of these reveals coming, and the 1-2 punch combination here provides one of the better Superman runs I’ve read in a while. 5/5 Bibles.

I typically don’t get the chance to review comics, but when I get the nod from our Lord and Savior the “Mad Monsignor” Moody, I’m eager and up to the task. Valiant’s Redline #1 by Neal Holman (Archer, Frisky Dingo) is right up my alley: it’s violent, crass, funny, and military. Mix together vigorously, and I’ve got a good night ahead. Set in an undetermined near future where Mars has been colonized and apparently terraformed (no one uses any sort of breathing apparatus). As one would expect, human colonization didn’t go over to well with Mars’ apparent inhabitants, and a long war ensued. Issue #1 picks up during peacetime post conflict, and is a clear mirror for the current situation in the Middle East. Earthborn Private Military Contractors are set to safeguard resource procurement, and stuff goes FUBAR.

Holman does a fine job with dialogue. Having spent considerable time around the fine men and women of our armed forces, I can confirm that this is how they speak to each other, and he captures it all very well. It’s crude, it’s demeaning, and it’s fun. The men and women in these types of situations have to use humor as a defense mechanism to balance out the awful stuff they’re experiencing; Holman’s take on the banter was on point, and it felt real and authentic. Redline also excels at building intrigue and a bit of mystery along with allowing the reader to get to know all the characters very well in a short span. I was hooked, and I loved every second of it. Think Starship Troopers meets 13 Hours, and you’ve got a close idea of what you’re getting into here. 4/5 Blown Up and Shot at Bibles.

The few panels of action were completely overshadowed by the drama revolving around Nightwing and his love interests. The small banter between the girls take away the interest in the story. If you can get passed that, the story’s plot is entertaining. Take underground Metahuman fight club, sprinkle in a bit of shape-shifting batman and take all the drama of a show on Lifetime and you get Batgirl and the Birds of Prey!

This series is worth the read if you like members of the team or if you enjoy a decent cat fight. Roge Antonio (Nightwing, Joker: Endgame) has a beautiful style that highlights the characters in relation to the background. The scene with Blackbird and Gemini added a massive amount of badassery to the storyline. But overall, this issue is one for casual reading. 2/5 Avian-based-Humans Agree.

This time, he’s orphaned by the KGB who murdered everyone in his parents’ church. Eventually he winds up in the titular Gulag 396 where he makes a deal with the evil atheist warden for Armstrong’s freedom. Eliot Rahal’s writing is fine, but the real star of this story is Francis Portela’s visuals. Everything from a congregation member being blown away at point-blank range to the snowy mountain monastery is beautiful. Even something as simple as Armstrong’s clothing change as he talks about all the lives he’s lived just looks so good.

The backup story, “The Origin of the Pioneer” is less interesting. The Pioneer swings her hammer while telling the Russians about her entire people being wiped out. The Russians tell her they know who killed her tribe and point her in the direction of a country that hadn’t surrendered to them yet. The end. Yawn. Again, the art was the best thing. Juan Jose Ryp’s facial expressions are animated, with The Pioneer’s moving from anger to sadness to a victory scream as she tells her story. Matt’s Kindt’s writing is OK, but a little boring since everything is all exposition. 3.5/5 Bibles.

As far as DC’s Rebirth series goes I’ve kept up with the majority of the titles, save for one: New Super-Man. When assigned to me, I didn’t know what to expect going into issue 9. Our protagonist is Kong Kenan aka New Super-Man. Not Superman, mind you (more on that in a sec). He has the potential to reach Supes’ full abilities, although they don’t manifest at once, as he has to train–under his mentor, I-Ching–to get to that level. As of now, he only has invulnerability, super-strength and a bit of super-hearing. When Lex Luthor (yes, the Lex Luthor) shows up to the Justice League of China’s headquarters, he offers Kenan an opportunity to come stateside as a security consultant at Lexcorp. Before your inquisitive mind asks! Yes, there is a indeed a Bat-Man along with a Robinbot in the League.

Accompanied by his mentor to Metropolis, Kenan has a quippy back and forth with Lex in Mandarin, as I-Ching “translates” to his liking. Feigning ignorance, Lex stops the BS with Kenan and explains to him the real reason he’s in Metropolis. Partly feeling responsible for Super-Man’s creation he wants to imbue Kenan with powers enough to match Superman, or at least that is what we’re told; Lex being Lex, there’s always ulterior motives. Kenan being the brash new superhero on the block, obviously he wants to take a shortcut so as he can avenge his mother. Only that shortcut takes opening a gateway to hell! 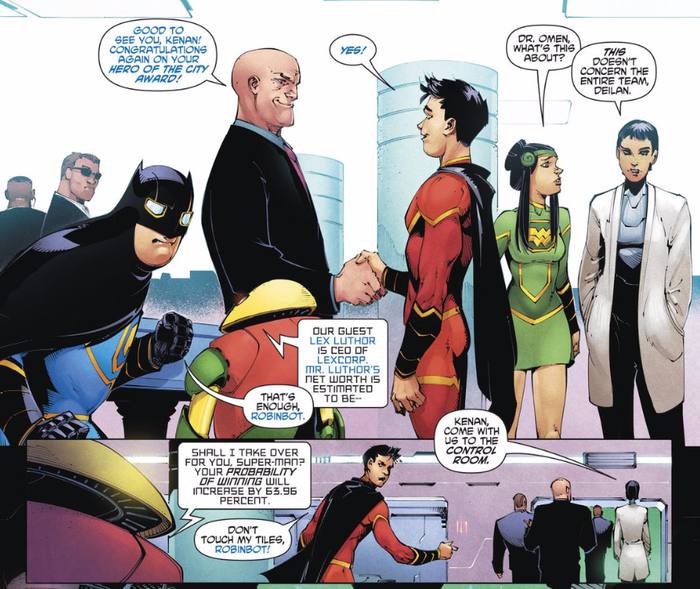 Written by Gene Luen Yang (Avatar: The Last Airbender), he gives a new and exciting view at one of DC’s new corners in the Rebirth line. The New Super Man #9 is all kinds of fun, although the cover is misleading, but fun nonetheless. Art by Viktor Bogdanovic (Batman: Arkham Knight) is not hard to follow at all. If anything, this is like watching an anime, and can he draw emotions, with all the subtleties that implies as well! Whether it’s a look of concern on I-Ching’s face, a maniacal grin on Lex’s, or the way Kenan lovingly looks at a Big Belly Burger, it is easy to read these character’s faces. 3.5/5 Bibles.

LOW #15 ended with a cliffhanger worthy of the most nail-biting season finale, so it’s a super-ballsy move for Rick Remender (Uncanny X-Force, Black Science) and the gang to return from hiatus with a flashback story. Remender even doubles-down in the letters page and let’s us know that we won’t be heading back to the surface for that conflict resolution any time soon; so don’t worry about being invested in any of that for the time being. We just get to drift in the wind.

So, what does that leave the reader with? A tale of Marik’s gladiatorial combat that takes place well before the entire story that we’ve read so far. And these guys are all so great, it still manages to satisfy. The comic functions as a done-in-one with efficient characterization that makes these new characters shine in the few pages they get, while introducing an interesting element into the tale. Of course, this is the reason for this entire digression and something that should prove interesting as it someday crashes into our present-day narrative.

As usual, Greg Tocchini (The Last Days of American Crime) and Dave McCaig’s (Black Road) work is nothing less than stunning, providing dynamic and exciting panels that are always in service of the story, as flashy and grand as they sometimes are. And Wooten turns in his usual top-drawer work as well. LOW continues to be one of the most exciting and well-made creator-owned comics on the rack amidst this renaissance in which we are lucky enough to find ourselves. 4*/5 Retconned Automatons.

*-1 because following that damn cliffhanger up with a flashback was still a dick move, I don’t care how you slice it

Cardinal Brooks here, with my review of The Flash #18 by Joshua Williamson (Masks and Mobsters, Justice League vs. Suicide Squad) and beautifully drawn by Jesus Merino (Justice Society of America). While I haven’t been reading The Flash since before Rebirth, I might be out of the loop; but I do watch the CW’s Flash (don’t laugh!)… so, hey, I kinda know what’s going on. There are some obvious differences and similarities, likethe fact that Iris doesn’t know Barry is the Flash and neither does Wally.

This issue kicks off the new story arc “Sins of the Father” and begins with Wally (Kid Flash) having a dream about his father Daniel turning into the Reverse Flash. Wally meets up with Barry for a little training, with the info that Daniel has been transferred out of Iron Heights to Belle Reve. The Flashes break into Belle Reve only to find no Reverse, and are confronted by Amanda Waller. You guessed it: She’s got the secrets on Daniel, because she’s got the secrets on everyone. If that isn’t enough to tantalize you, enter Captain Boomerang and a team-up of disastrous proportions. 3/5 Boomerangs.