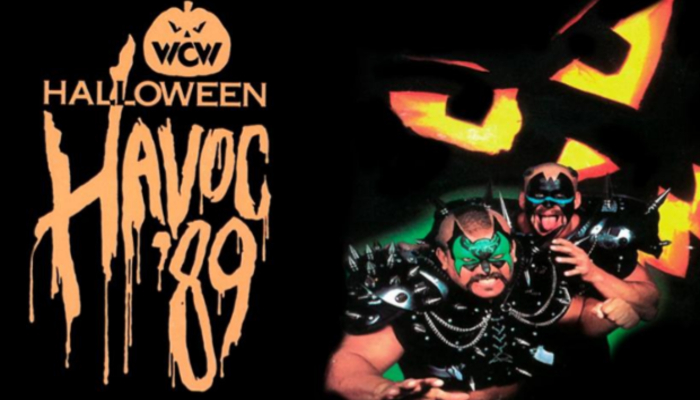 It’s Friday once again and it’s the Friday before Halloween. So, in the spirit of the holiday, I decided to do a spooky time-based episode this week. Initially, I flirted with going a totally different route and reviewing a Halloween episode of Prime Time Wrestling.

Alternately, we’re headed to the City of Brotherly Love for the first ever Halloween Havoc. I mean, Halloween is in the name. It has to be good, right? So, lets fire up the Wayback Machine, put on our best costumes and get ready for another Flashback Friday! 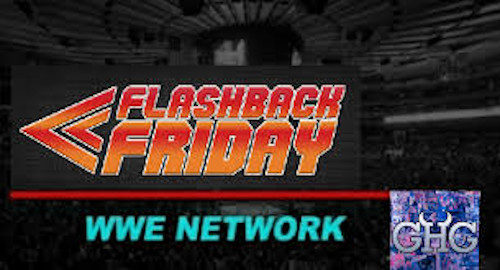 Ummmm… the fuck is this? First, the graphics are pretty shitty to say the least. This was 1989. Why does it look so bad? I feel like my 12-year old niece could have done a better job with a 1989 graphics program. Bob Caudle & Jim Ross are in the announce position. Wow. Ross is so frickin’ young. They actually called it Halloween Havoc ’89? How awkward does that sound? Nobody thought to keep the number but not say it live? Really?

Mike Rotunda vs Z-Man – Hold up… Did Jim Ross just call Gary Cappetta “the World’s Most Dangerous Ring Announcer”?? Seriously?? I feel like Ross is lying when he says that the fans have been waiting for this one. I mean… I guess, they’re waiting for the show to start in their seats, so they’re technically waiting for this match, but I’m pretty sure that’s where it ends.

At least the wrestlers here were technically sound; I have to give them that. Somehow, these two think Z-Man’s the next Ric Flair, the way they’re praising him, but we all know how that worked out. He never made it past the mid-card and was released in 94 and retired by 95. Some cool flippy stuff and Tom Zenk remains undefeated in WCW. Cool story, bro. – 1/5 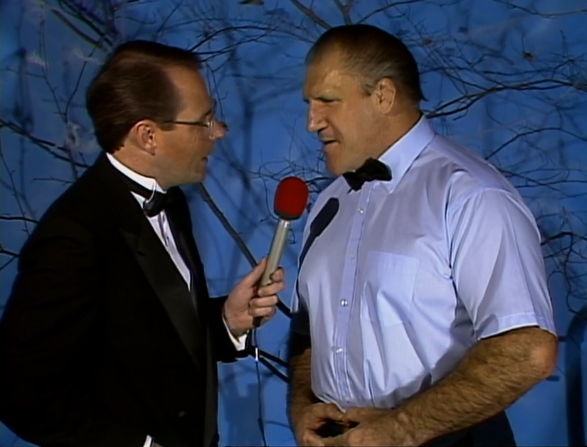 Why is Bruno Sammartino a referee tonight? Does Vince know about this? What is the point in asking him what his role is as the referee? I’m pretty sure it’s no different than a ref in any other match. Cheap pops much?

Dr. Death & the Midnight Express w/ Jim Cornette vs The Samoan Swat Team & the Samoan Savage w/ the Big Kahuna – Who are the babyfaces and who are the heels in this match? Can anyone tell me? Bobby Eaton got his ass kicked for so long. Holy shit. For. So. Long. I guess Oliver Humperdink turned them from Wall Street back to savages? I NEED to see that.

This one was wild, but what would you expect from the Samoan SWAT Team really? As expected, this one got out of hand and the ref lost control of the action. Incidentally, Corny got on the apron and Lane got shoved into him and the Samoans got the pinfall. Wait… I thought the Samoans were the heels? I don’t even know. – 3/5 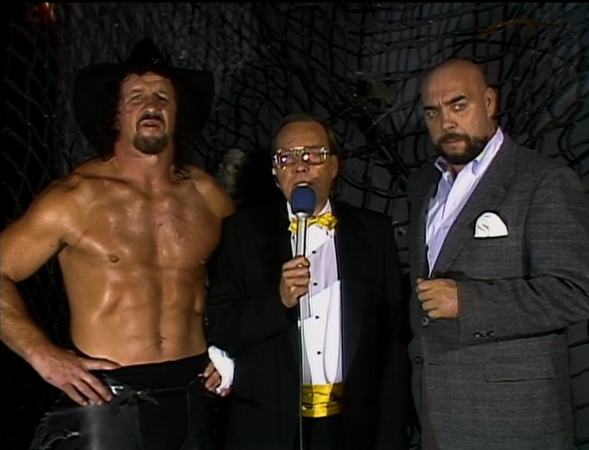 Next up is Gordon Solie with Terry Funk and Gary Hart talking about the Thunderdome Death Match. In brief, the cage is going to be electrified. Yup, totally good idea. I’m sure nothing could possibly go wrong here tonight. Not at all.

Cuban Assassin vs Tommy Rich – This probably should have been your opener. No, eff that– dark match. Obviously, it’s the bathroom break match really early. Does anyone actually care about this at all? I know. Tommy Rich is a legend. Whatever. At least this was quick. I actually went to the fridge for a beer myself during this waste of time. And Rich wins with a Lou Thesz Press. Pretty much sums it all up. – DUD

World Tag Team Championship: The Dynamic Dudes w/ Jim Cornette vs The Fabulous Freebirds (c) – Who thought it was a good idea to put two grown ass men in neon hats with fucking skateboards? John Laurinitis cannot skateboard. Prove me wrong. Who wrote this crap? On the other hand, Bad Street USA might be the greatest old school theme song. It might even be top three ever. Michael P.S. Hayes is fruity as fuck but the girls love him. I don’t get it. He’s wearing eyeliner ffs. Once again, I’m not sure who the heels and who the faces are. To summarize, WCW didn’t do a good job of making heels do heel things and faces do face things. 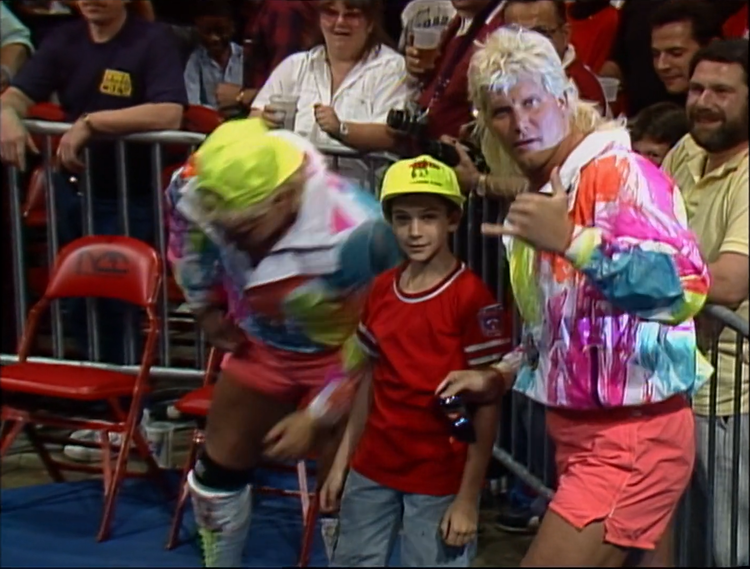 The Dudes were taking pictures with kids and shit before the match and they’re the fucking heels? I don’t even think the fans are sure. Regardless, they cheer the Dudes for an exciting move and then immediately boo that that move helped them. It’s very confusing. Garvin got the pinfall after reversing the Wipe Out when Hayes tripped Johhny Ace and pulled him out of the ring. Meh. – 2/5

The Steiner Brothers vs Doom w/ Woman – Holy shit. Rick and Scott Steiner really went to the University of Michigan? Rick sounds mildly retarded and Scott… well, we all know about Steiner math. This guy never gave a good promo. Initially, the Steiners attacked Doom before the bell. Why are these two always fighting black guys on Flashback Friday?

This is Doom’s debut in WCW. For those of you who don’t know, Woman had started stalking Rick, professing her love for him. She turned on them and tripped Rick, costing them the tag titles to the Fabulous Freebirds. That brings us to tonight, where Woman vowed the Steiners would subsequently meet their “doom”. Rick hit the belly to belly suplex but Woman slipped something into one of Doom’s masks. Subsequently, a head butt would be enough for Doom to get the pinfall victory. – 2.5/5

United States Championship: Lex Luger (c) vs Brian Pillman – Gordon Solie points out that Luger has been champion more than once, which means he can be beat. What a dick. Ok, why is Pillman coming out with a bunch of cheerleaders from Riverdale? Is he supposed to be Jughead or Archie’s cousin? Of course, Flyin’ Brian put on a good showing in this one. He typically worked with the cruiserweights but he really held his own with Lex here.

On the other hand, Luger played into the crowd and did heel shit. I can respect that. Pillman almost won the match with his finisher but Luger was too close to the ropes. Finally, Lex moved out of the way of a dropkick off the top rope and then dropped Pillman’s neck on the top rope for the pin. Huh? Who wrote that shitty ass finish? – 2.75/5 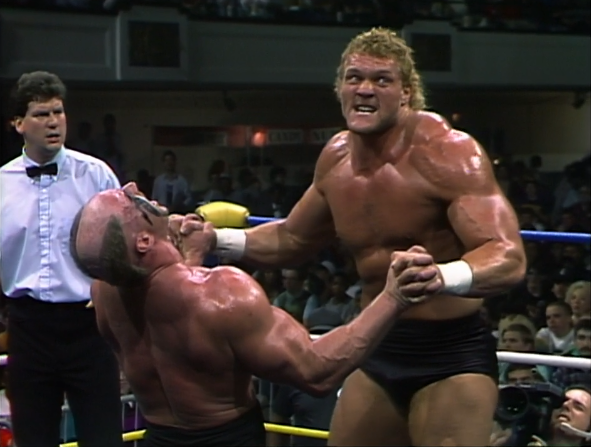 What? Did Sid just kip up out of a head scissors? Incidently, Vicious had so much potential that nobody ever used correctly. There aren’t flippy spots or many technical moves, but overall, this is a very entertaining match. Then, Teddy Long gave Dan Spivey this huge key he had and Spivey used it on Hawk. As a result, the ref disqualified the Sky Scrapers. Way to make them both look strong I guess. Next time, can you make it less fuck finishy? Thanks. – 2.5/5

Thunderdome Cage Match: STING & Ric Flair w/ Ole Anderson vs Great Muta & Terry Funk w/ Gary Hart (Special referee – Bruno Sammartino) – I don’t really know what a Thunderdome Cage Match is but I do know there is electricity involved, notwithstanding, I’m ready for it. Finally, we find out that you win by having the towel thrown in by your corner man. The cage goes to the floor like a hell in a cell does but it’s wrapped with all kinds of shit and electrified at the top. Also, and there isn’t a door. Basically, there is no way in or out. 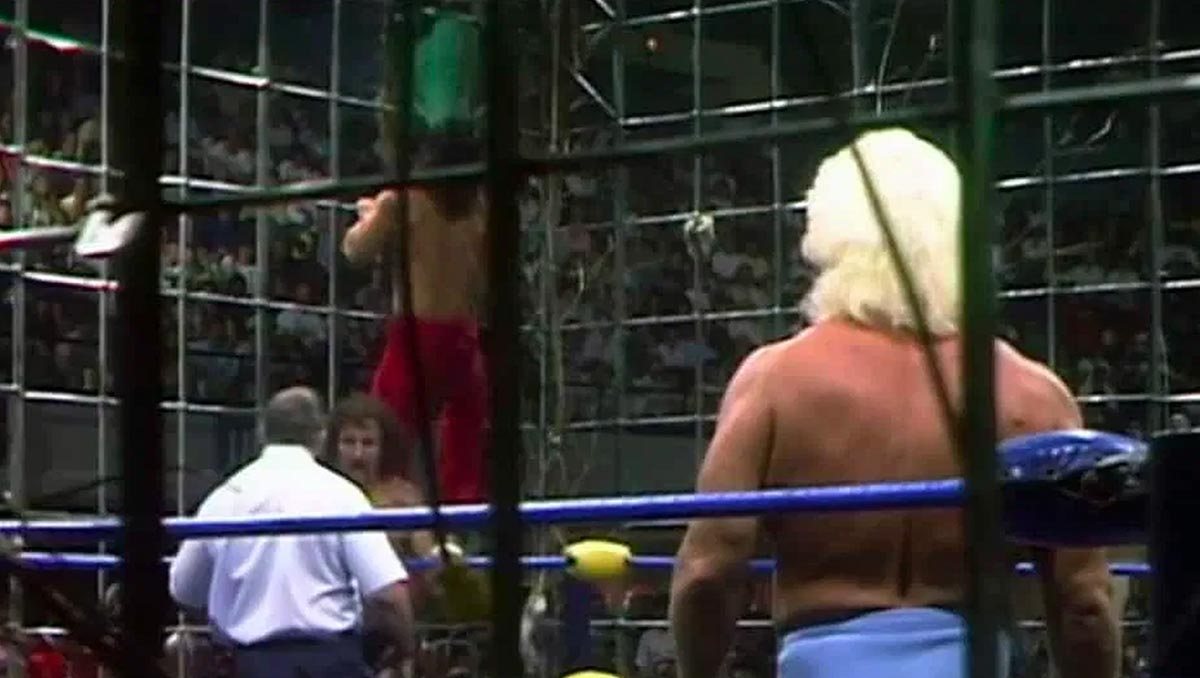 Something on the corner of the cage is on fire. Nope. Nothing could POSSIBLY go wrong here tonight. Muta sprayed his mist on the fire to put it out. Whatever works, I guess. To start, Jim Ross points out that STING was originally a part of a tag team called the Blade Runners and says that his partner has not progressed as much as he has. For the record, his partner, the Ultimate Warrior, was a two-time WWF Intercontinental Champion and he was currently being put over by Andre the Giant. Just sayin’. 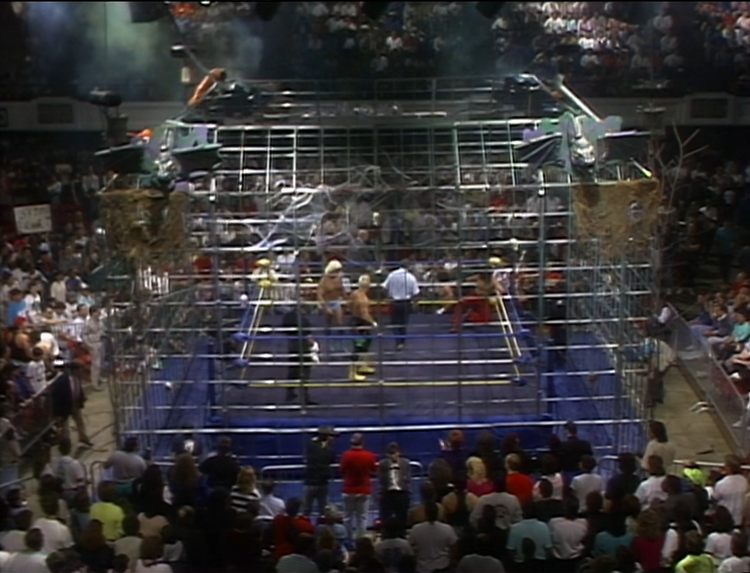 Why are these guys fighting on the cage? There’s sparks flying and shit. You’re not getting out. What’s the actual point in all of this? Funk is hanging from the top. I thought the top was supposed to be electrocuted? Currently, Funk is tangled in the wire. Way to make the entire idea look weak. Why are there spider webs and branches and shit? Can someone please tell Funk to get down? The cage turns in at the top, so you couldn’t even climb over if you actually wanted to. Nevertheless, STING is swinging from a rope now. No, I don’t know why. Ok. He just swung, feet first, into Funk. Touche. Can someone please get electrocuted? 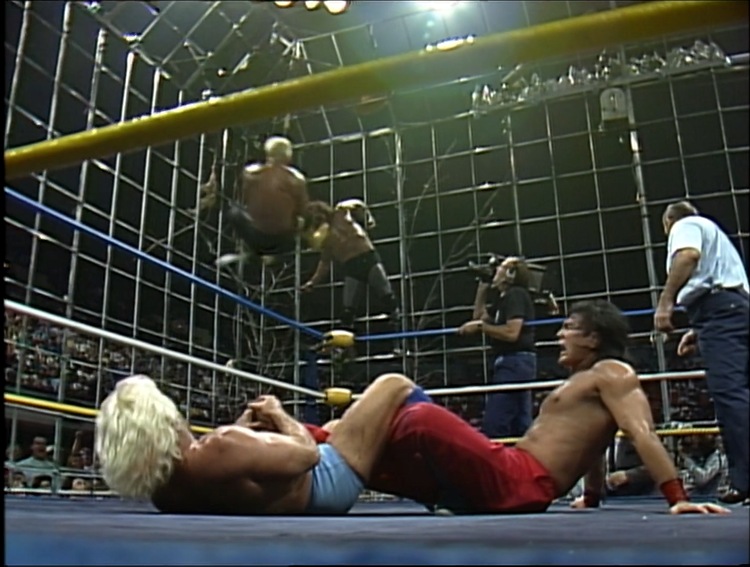 Muta and Flair are going at it in the ring with submission moves now. STING might be tied up on the cage. Ole is untying him right now. What the fuck is actually going on? Subsequently, Funk and Muta are double teaming Flair in the ring. Genius! Holy shit. Meanwhile, STING just leapt from the corner of the cage, into the ring, onto Funk. Next, Muta is climbing to the top. I’m guessing that they just shut the electricity off since it already started a fire. 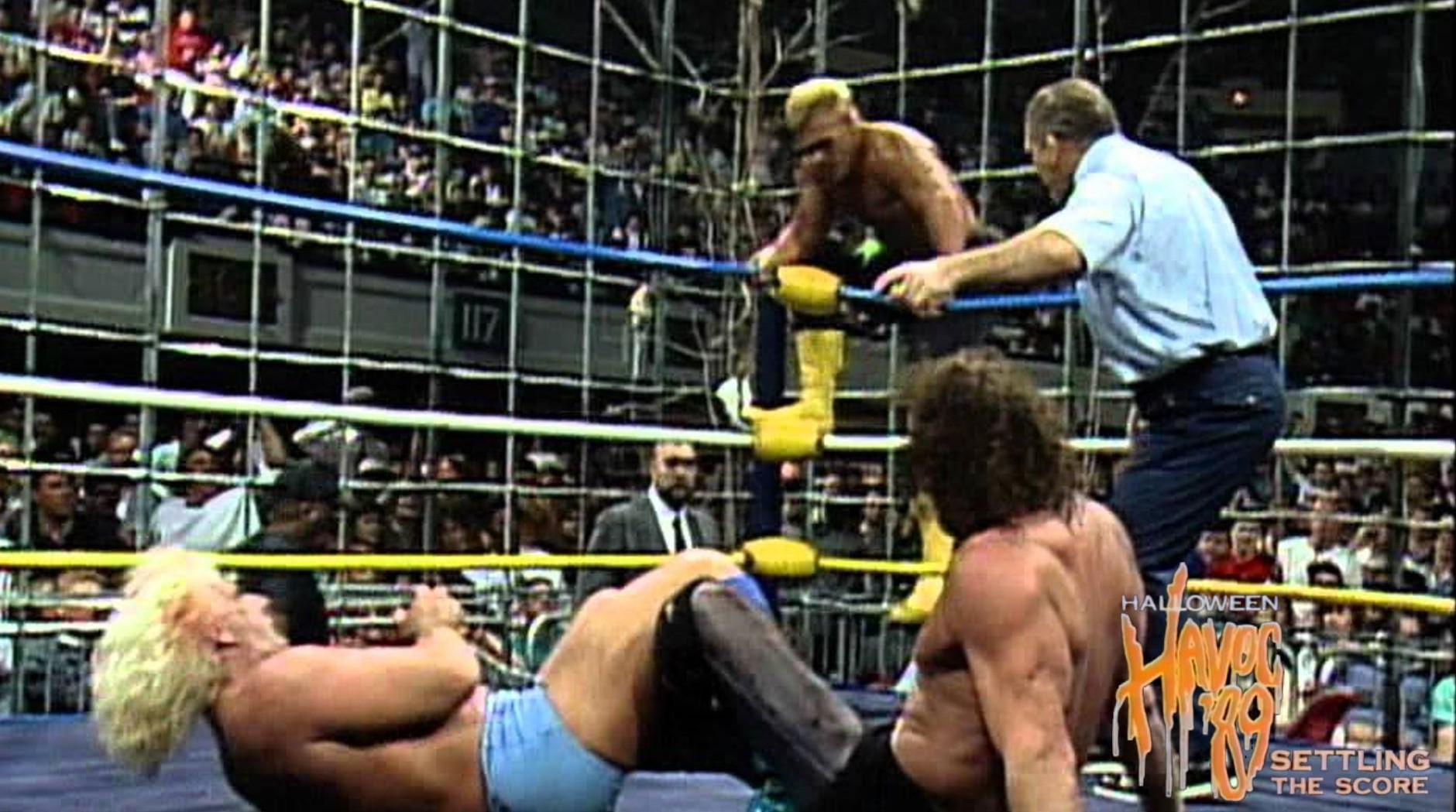 At the end, Flair locked on the figure-four on Funk. STING hit two splashes off of the top on a helpless Funk. Muta tried to attack the Sammartino and Bruno knocked him out of the ring. Huh? Ole Anderson nailed Gary Hart and Hart’s towel flew out of his hand. In all of the wildness, Bruno saw the towel and called for the bell immediately. Wait. A fuck finish in the main event to have the babyfaces win? Who booked this shit?? Wow. – 2.75/5 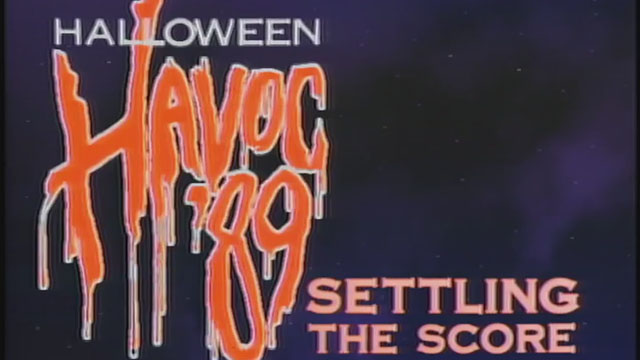 Overall, this show was pretty damn bad. Like really bad. The best thing about it was the Thunderdome Cage match and that was kind of the drizzling shits. If I had to tell you to watch a match, I guess it would be Luger versus Pillman. In a word, I’m going to go binge eat some candy to get rid of the horrible taste in my mouth from this show.