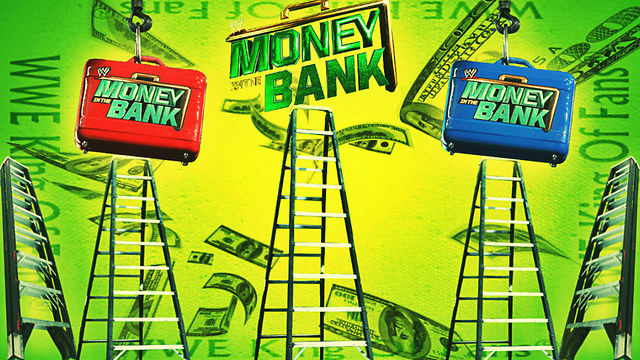 I bet that “WHAT!” many of you are looking forward to this Sunday’s WWE Money in the Bank PPV is different than that of yours truly, “Pastor” Chuck. Don’t lie about seeing Stardust; I mean, rather, the fact a new champion will be crowned since Daniel Bryan got stripped like a female star from Saved By the Bell.

But, truly, how excited can anyone get for yet another possible Summer of Cena HANGING in the balance?

On one side of the ring, you have two young men who grew up in the business. Their whole family eats, sleeps, and breaths wrestling. On top of that, they were trained by one-half of arguably one of the greatest tag-teams to ever grace your television screens, Harlem Heat’s Booker T.

On the other side of the ring, Jimmy & Jey have the privilege of staring into the faces of the rejected cast members of Duck Dynasty, the Wyatt Family (minus Bray, who will hopefully be getting ready to take his rightful place as new WWE Champion later in the night).

If you have watched either of these two teams wrestle over the past couple of months, you know that both have that intangible quality. The Usos know each other like only brothers could, obviously giving them a huge advantage over opponents– in addition to their arsenal of high flying moves.

But if you want to talk scary, let’s talk Wyatt…and I don’t mean my fellow Apostle The Big Show Bishop Zom Wyatt, either (don’t hurt me, bro!). The pairing of “Bushwacker” Luke Harper and Erick Rowan is suprisingly more than just muscle to the crazed Bray. Now, one could argue that Harper is the best wrestler of the three. Add to the fact that he, too, can do some crazy top-rope stuff, especially for a man his size; and you don’t have to worry about him at all in a match like this. Even more so when you have the heavy hitting Rowan backing you up.

Winner: The Usos. However, if a perfect storm were to blow through, then I would love to see all three members of the Wyatt family walk out of Money in the Bank with gold around their waists. Otherwise, it doesn’t make sense for the Wyatts to win this one.

A Requiem for the Funkadactlys.

I will consider this match a success if: a) Cameron is not involved in commentary, and b) No sexual harassment charges are filed against Jerry “The King” Lawler (see this week’s RAW and his eye-raping of Paige). But, more over, the Moses fully expects the demise of the Funkadactlys.

Look, I just can’t come up with anyone else who needs back-up dancers. And, for that, I’m truly very sorry, Hornswoggle.

Anyway, I love Paige, and therefore, will always show bias and bolieve everything she does is magic. Naomi will be champ but not just yet.

Winner: Paige due to misplaced interference by Cameron. Hopefully via scorpion cross lock. There is a distinct possibility that it will end in the dreaded “Diva Roll-up”, which is like kryptonite to these women. Let’s pray to Moses that poor Naomi doesn’t get bogged down in a garbage feud with Cameron who needs to consider a different line of work. Let’s trim the fat and make room the amazing talent down at NXT.

At least not right now.

Yet, while I’ll allow our good congregation to dive headfirst from the turnbuckle onto your.. ahem.. Main Event, just remember that it’s the “second tier” MITB Ladder match that always steals the spotlight.

This year will be no different, chiefly in part to the New Loose Cannon, Dean Ambrose. Talk about a guy really growing on me. He’ll do just enough to end any chance of a Corporate Victory, but Rollins own athletic insanity — and sheer intensity — will do no less than cancel out both former Agents of S.H.I.E.L.D.

My biggest issue with this Ladder Match is that it’s missing several of the Fed’s brightest stars: No, not dudes from NXT; but Adam Rose, Fandango, Bo Dallas, hell, even Star.. dusssssssssssttt!

Winner: Me. This will be the best match of the night, much in thanks to the nuttiness between Rollins and Ambrose.

Ey, Yo! It’s the man with the plan, your very own King of The Ring, Guy Padre…back in the squared circle of cool to give you my two bits and predicts for the MIB ladder match for the WWE gold. Now I’m still smarting from the whuppin the YES! movement took as it was unceremoniously booted to the back of the push-bus. So I plan to keep this short by taking a look at the participants in this historic match.

Let’s start with Galactus, Devourer of Worlds. Wait, what?! Sorry, the Padre got a bit confused. That would be Bray “Eater of World’s” Wyatt. As great as the Bray Wyatt movement has been I just don’t see him getting the ball to run at the head of the company. His gimmick works really well in that upper tier, minus the belt. I don’t see him as the main draw around which you build all of your major storylines. If this was a smaller fed, (see Raven in a similar gimmick some years back in the old ECW), sure.  So as much as I love following the buzzards, I’m going to have to bet against the patriarch of Spooky-Crazy. But I do see him making the match something memorable for the fans. Sister Abigail off the top of the ladder anyone?

What about John Cena? Will Cenation have something to cheer about? Yes, but it won’t be the master of the five knuckle shuffle grabbing the straps. Cena is too been there done that and also too obvious a choice. The Beantown Superhero loses this one, folks.

As much stroke as he has with the Game and Lady Helmsley, I don’t think another run for Orton is in the cards so soon after the last. On the flip side I think it is too soon for Cesaro, but who doesn’t have him as a sentimental pick with the dangerous one, Paul E by his side?

Sheamus, Kane and Del Rio, odd men out in my opinion, are just their to be bodies in the ring filling out the match. These three are non factors as far as the final outcome…well, maybe not Kane…

Winner: So yes, that leaves us with the cousin of The Great One, Roman Reigns. A Reigns win creates storylines both fresh and endless. On a night that could see Seth Rollins win the other MIB match, Roman winning the WWE title would set up an epic confrontation and blow this rivalry up. Not only that, it sets up natural rivalries with Bray Wyatt, a nice beast vs. beast war with Cesaro, or a brutal fued with Orton. So many more options with multiple fued scenarios would naturally spring from a Roman Reigns win.

WWE Money in the Bank will be live on PPV (or the WWE Network) this Sunday, June 29.