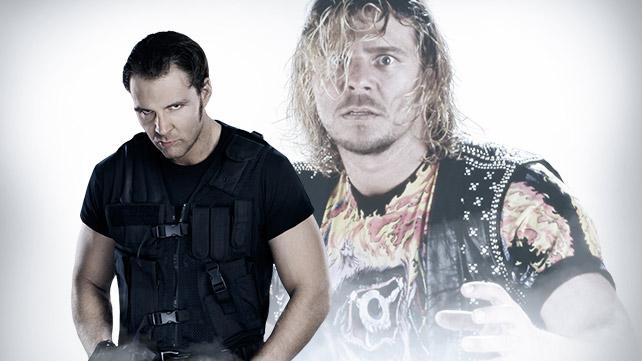 We’ve mostly seen it all before: Ripped jeans, scraggly blonde hair; our ears treated with the kind of promos that we don’t typically hear — ones that were a little off — that could only make us think this guy is a Grade-A lunatic. Only, this time, it’s no longer 2014. Somehow, I’m being transported back to wrestling in 1996 whenever I witness Dean Ambrose on the screen, and as anybody knows, this is not such a terrible thing.

If you are reading this and happen to be under the age of 25 and have no effing clue who or what I’m talking about, I will give you a very brief run down of what is known in wrestling circles as the beloved “Attitude Era”. In this storied era, the product was far more edgy and mature than just about anything you’ll see now on RAW or Smackdown. You could expect bloodbaths, foul language, and all but the nipple as it pertained to how the women dressed. For a 13-year old boy, this was all I needed in life.

The WWF(E) was very good to me.

Now that you’re all caught up, this Disciple must move onto the short story of the “Loose Cannon”, Brian Pillman. That strep throat voice, the flea dive bar attire, and absolute whimsical insanity were card-carrying traits of the former Cincinnati Bengal during the time Dean Ambrose was still on his living room floor watching Romper Room. We all knew Pill’ was going to bring so much to the company, and — with his frenemy “Stone Cold” Steve Austin firing on all cylinders — we couldn’t wait another second for these two to tear each other apart. It was also in this rivalry where the former “Flyin'” WCW superstar-turned-Hollywood Blonde brought his own brand of lunacy to the previously otherwise straight-laced roster. And just as his popularity began to skyrocket, wrestling fans around the world (including our very own Monsignor, who adores BP as much as any other) were struck with the tragic news: Pillman was found dead in his hotel room. Not to sound insensitive to the fact that a man had died and left behind a loving wife and children, but I remember feeling downright terrible that the world was deprived of this amazing talent…

Fast forward to 2014. With today’s sterile TV-PG environment, story arcs are often silly and dumbed down (“Don’t be a lemon!”). Characters are often vanilla and, all too frequently, gimmick free to cater to the general public (“Gospel” Big E?).

Yeah, those same people whose parents fell for the Gobbledy Gooker are now those who can’t really be fooled anymore (“We the people!”).

But, off in some dark corner somewhere is a guy with jeans — yes, complete with tears, rips and holes — and “wife beater” tank top. His messy, unkempt hair and leather jacket exude a James Dean Devil-May-Care attitude. He oozes character and charisma. And he’s a lunatic. The creative genius behind WWE has labeled him the “Lunatic Fringe”. This man, of course, is Dean Ambrose. Whenever you see him serpentine his shoulders and begin spouting promo gold, you can’t help but be reminded of the original Ticking Time Bomb.

Yet while the similarities are clear (this side of the overall basic look, promo and in-ring style, they’re both born and raised in the Cin City), it’s also clear that Ambrose isn’t out to be a carbon copy of Pillman.

Dean is certainly his own man, more calculating and deliberate with his actions, as if he’s embraced the madness and allows it to guide his motions. So don’t expect Ambrose to pull a loaded gun on another talent and have the gunshot “heard round the world” following the video feed cuts out (yes, that happened with Pillman and Austin)…

If nothing else my fellow congregants, expect great things from this young talent. The guy is just about as over anyone in the business at the moment, he’s booked near the main event on just about every show, and his in-ring work is perhaps the most solid and consistent with Daniel Bryan on the shelf and CM Punk’s status in question.

Dean Ambrose is a gift from the wrestling gods. He’s a throwback to a time when wrestling was not good, but GREAT.

He also gives us a glimpse of what might have been: A time bomb that has taken almost 20-years to explode, but finally has, and the entire WWE Universe needs to take notice.