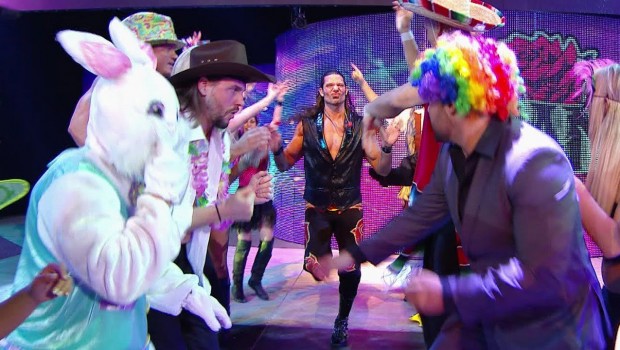 While we’ve all been busy out filming our VERY FIRST EVER webisode of #GHGtv‘s Ringside Apostles series, we still have a few minutes to spare for WWE SummerSlam.

Of course we do!

And if you watched RAW the other night, you’ll know that the hottest event of the summer just got that much hotter. But, without further ado, let’s get right into our collective picks and predicts for this Sunday’s BIG event.

I haven’t been this excited for a featured Diva’s Championship on the main card of one of the “Big 4” WWE Pay-Per-Views…oh, since Sable was featured in a Bra and Panties match. And years later, we saw two Hall of Famers, Trish Stratus and Lita — two gorgeous women who could GO — break the glass ceiling that existed for women in wrestling. Since, we the fans have basically been subjected to inexplicable women’s division matches that were simply repugnant. As soon as that music hit, everyone knew that was your cue to hit the bathroom or concession stands. Until now.

In one corner, we have up-and-coming challenger and 21-year old second generation wrestler, Paige.  She’s aggressive, goth, and a little crazy. The girl can work. She still has a lot to learn, and she’s not QUITE there yet in terms of timing and cohesion of her moves. Everyone’s favorite mighty mouse, AJ Lee, on other hand, was the longest reigning Diva’s Champ only up until her loss to Paige at April’s Mania. This has culminated into a series of sneak attacks perpetrated by her “frenemy”, which shows both can pack a mean streak a mile wide and flip a switch at any moment. Carrie, anyone?

Winner: AJ “Quinn” Lee via Black Widow submission. It’s tough to book this one. The smart call would, of course, have the heel (bad girl, Paige) go over the face (girl next door, AJ), and have AJ chase the title until she goes over at Mania and triumphs; but the problem therein lies with the fact that AJ doesn’t NEED the push– Paige does.

This one is personal– or maybe just for your one and only Moses being born and raised in C-Town. Fuck Lebron and Johnny Football, our championship aspirations lie with fake ass suburban born Miz (Parma, Ohio) and the “real” Cleveland boy Ziggler, as they battle for the IC title. I’m calling on this to be the dark horse match for the night. These two actually have a lot to prove to the powers that be and both need a good match to keep their newly found momentum going. Ziggler has gotten a nice push lately but I’m so used to being let down. Lets add the fact that a Miz win is necessary to maintain the prestige of the belt. And yet while I do enjoy Hollywood Miz and his jaw-dropping money maker as the mid-card champ, can he — more importantly — bring life back to the IC division with an extended title reign?

Winner: The Miz via some type of awesomeness or…roll up. – Moses Lee

This is like watching Ivan Drago take on Rocky all over again. Don’t get me wrong; I enjoy watching each performer, but this feud is empty. It needs life to make it worth the entertainment. Rusev should be powering through opponents to grow his character. Jack Swagger is trying to keep the America way alive but his push isn’t doing anything special — so my predictions on this match hold no water. It’s filler.

Winner: Rusev for the win. He has too much talent to have it all bottled up and not put to use, so why not POWN the American Flag and fist pound Swagger till he turns Red, White, and Blue? – Richard Zom

Carnage. Chaos. Destruction. Utter dismay. These are the adjectives that Michael Cole will be searching through his pre-show dictionary before this match. The neatest part of this extravaganza will absolutely be watching Dean Ambrose maul his way through several faceless WWE Superstars surrounding the ring. You know, the types that would run scared shitless from the Guardians of the Galaxy. Instead, they’ll try their damnedest to inflate an already volatile situation between these former friends and members of The Shield.

Not even Big E, Khali, Cryback and Hornswoggle together will have a chance at preventing Ambrose and Seth Rollins from knocking each other into that sweaty LA crowd and — better yet — knocking that beer from our beloved Pastor all over his silly mug.

Winner: Everyone who purchased the WWE Network for — YOU GUESSED IT! — only $9.99! Despite the fact Rollins has the briefcase (and, yes, I acknowledge I was wrong about him cashing in that quickly), I just don’t see this rivalry going away any time soon. This could easily form into something very Rick Rude/Jake the Snake. Here’s to “carnage, chaos, destruction” and “utter dismay”!

–Here to Save You All–

Probably one of the easier matches of the night to call. Why? Because God bless Chris Jericho. He may save Bray yet. The man, at some point, always puts young talent over. Frankly, you don’t necessary need to be talented to be put over by Y2J. Word on the street is that Fandango continues to send Jericho flowers. Most would agree that Bray is a more worthy beneficiary and certainly could use the help after that goofy ass feud with Cena.

Jericho got him at Battleground. It stands to reason that Bray will get the equalizer at SummerSlam. Let’s toss in the fact that Bray no longer has to live up to the expectations of being a living god like he was built up to be with Cena. What’s most important is how he will win. Note to WWE: Super refreshing to see Wyatt outside his tiny black room cutting a promo on RAW. Bray is so well performed and powerful enough as a character– that he would be so much more interesting out and about interacting with people.

Winner: I wish it would end in a clean, extremely violent Bray Wyatt victory but he will likely win via nefarious means. Harper and Rowan will get to Jericho one way or another, which will lead us to a deciding match at Night of Champions.

“Oh you know what I’m talkin’ about, baby.” – Dusty Rhodes

I was secretly hoping that none of my Apostle brethren would want to write about this explosive rivalry, because RAW certainly wouldn’t have been RAW without it. Triple H’s “ol’ lady” went and pulled out all the stops this past week, BUYING Daniel Bryan’s therapist into lying about some extra curricular activities going on between medical sessions. Well, Brie didn’t BUY into it — because she’s fucking Brie Bella and she’s fucking hot — but decided to beat on the no-longer-poor girl anyway. It was definitely a call back to early-2000s late night trash TV– and I wouldn’t have it any other way.

Winner: Well, this all depends on who wins the Diva’s Title. If Paige is the new champ, then any combination of Daniel and Nikki will distract Stephy just enough to earn a cheap schoolgirl roll-up victory from Brie Bella. But if AJ wins, then Stephanie McMahon will certainly make sure there’s NO CHANCE IN HELL that another woman upstage her during the summer’s hottest event. – Travis Moody

So, this is where the WWE is heading. There’s two sets of champions out there, both blue collar, work-your-heart-out-every-night types of guys– and they’re either sitting out at home, or waiting for the “SummerSlam 2014 Preview Show, exclusively on YouTube (or the WWE Network)” to be announced. I’m talking about the likes of the current United States Champion, Sheamus, and the World Tag Team Champions, The Usos. While we could very likely see Antonio Cesaro and Shea tangle it up AGAIN…maybe a surprise like Bo Dallas could bring bigger heat to that US strap.

As for my peeps, Jimmy and Jey, they’ve set an open challenge that could leave to a bevy of opposition. Anything, but The Wyatts – yes so says BISHOP ZOM! — at this year’s second biggest event. (A heel-turned Gold & Stardust? Ooohhhfffffffff….)

Now, on to the matter at hand. What can be said other than Orton is playing one of the best heels in recent years? You put a top heel and a fan favorite “face” in a match– oh your guaranteed some shit is about to go down. I mean, come on, The Viper is going to have a hell of a time taking on the Samoan Superman Fist that literally beats respect out of its opponents. Reigns is fresh, hungry, and on a path that will leave opponent after opponent behind him. Being a Legend Killer is one thing, but earning your stripes to become legend is another.

Winner: Roman Reigns will “Reign” Supreme over Orton…if The Authority doesn’t get TOO involved.

–MAIN EVENT: The Champ vs. The One in Twenty– (ah Forget It…)

Here you have it folks. The Main Event for the WWE Title at SummerSlam. Brock has been booked incredibly well in his return to WWE, beating a perennial who’s who of WWE Superstars ranging from HHH, CM Punk and most recently, The Undertaker at Wrestlemania 30– but can he beat Vince McMahon’s apparent reticence to put the title on anyone but Cena when times are tough and the roster is as thin as pundits perceive it to be?

When these two last squared off, Brock pulverized Cena for practically the entire match only to lose at the very end when Cena overcame all odds in a last minute booking change by Vince himself. Will August 17th, 2014 be the day Brock shrugs off that yoke and regains the WWE title? I think so. Rumors are circulating that Cena is taking some extended time off to film a movie, so odds are that Brock will in fact take the strap, but who knows if Vince will allow that to happen. I suppose we’ll find out on Sunday.

WWE SummerSlam hits the WWE Network at 5pm PT/8pm ET this Sunday for only nine-ninety-NINE!