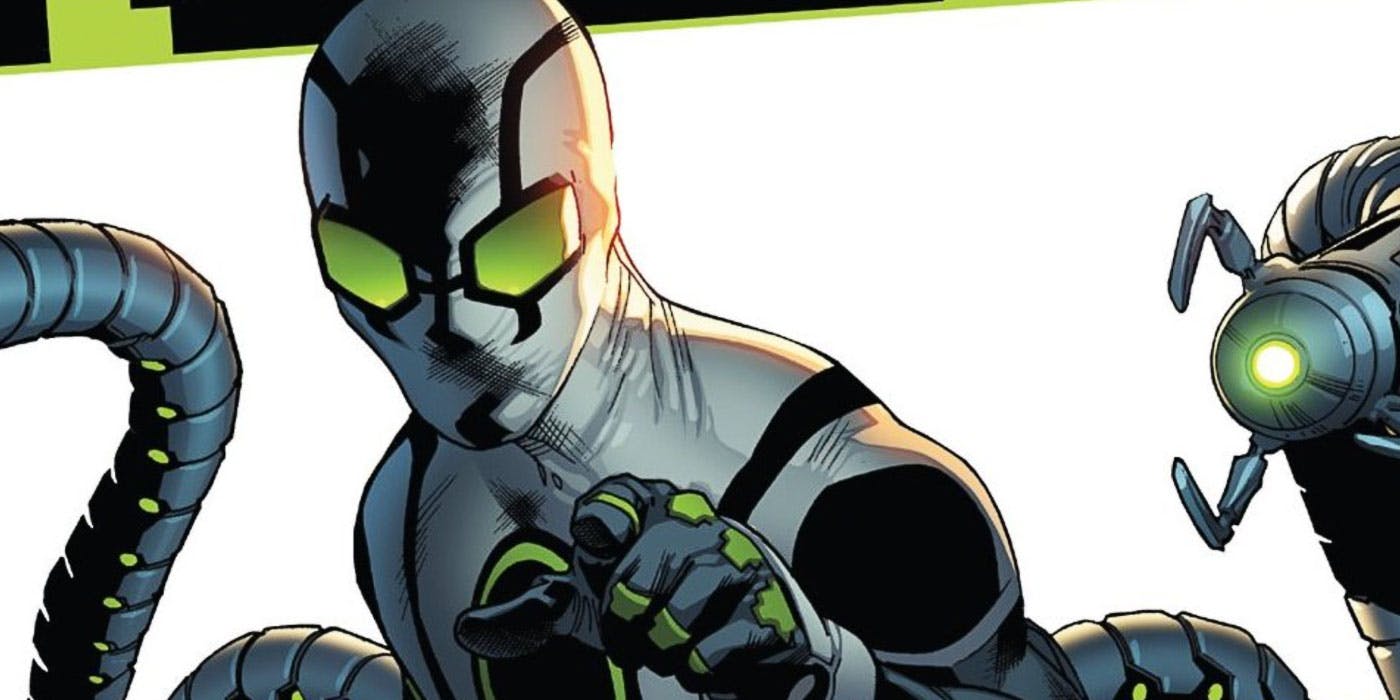 Holy crap, geeks and geekettes! It’s the weekend, it’s Comic-Con out here in New York, and we have more premiere issues than we can shake a stick at today. This is one of the largest editions of the Sunday Stash that we’ve had in a hot New York minute here at GHG, so let’s dive right in– you’re only a few subway stops away.

From what I’d been hearing about this series prior to the lead up, I had some reservations. It felt like much of his character development over the last decade or so would be undone. But then I remembered, Tim Seeley is writing. He does an excellent job in taking the early more one dimensional Star and blending in the rich layered personality from the Peter Davis era.

The setup is unique to any Marvel title and a perfect place to see other dimensionally displaced characters. One very disappointing trope made its way into the book (which I saw coming as soon as a certain geriatric character debuted). The line work and expressiveness by Carlos Villa was exceptional. Juan Vlasco complemented the art and both were buoyed by the pitch perfect palette by Carlos Lopez. My one gripe was the flashback art by Gerardo Sandoval. It reminded me of some particularly rough fill in art from mid ’90s X-Force. Some will like it, some will loathe it, but it’s definitely a distinct look.

In all, if Seeley can avoid that one trope that nearly pulled me out of the book, he’ll have a bonafide hit on his hands. 3.5/5 Bibles.

Holy shit, this is dumb.

First off, we have meh art straight outta 2007. Really basic PhotoShop 101 stuff on display. And the character design? You know how on a TV show, someone has an artistic kid, and they show crappy made-up superheroes that no one would ever think is cool, or want to read? That’s Sleepwalker. Specifically him. In every instance, in every TV show. He is every crappy superhero.

The book follows Sleepwalker assembling his own team of Amalgam universe rejects to try and save people from the Soul stone. Not kidding about the rejects, by the way. There’s Man-Thing Thang Thoom, and Scott Banner…who turns into a green powerhouse that gets smaller as he gets madder…not at all kidding about that, by the way. Not sure if Amalgam was the right universe to bring back, but back it is, I guess. This is a free book, right? They’re not charging for this? 2/5 Bibles…owed simply because of sheer “wtf is this?” factor.

Martin Dobbs was a Beantown Neighborhoodlum, known to terrorize Bostonians of every taste and smell, back in the decade before the big Y2K. Dude used to claim he was a direct descendant of one of the original Gangs of New York, but the media never caught onto this becuz he only told this to his victims before he’d drop their lights out. All the same, everyone wound up knowing him as the Dead Rabbit, anywho. Sometime around ’97, Dobbs dropped out, disappeared, vanished…  Ironically enough, a fistful of years after that, Scorsese dropped a joint he called Gangs of New York; which, incidentally, gave up some history of Dobbs’ ancestors that belonged to the Dead Rabbits gang – most notably, a dude named Amsterdam Vallon; and he used to hang out with a one-eyed butcher by the name of Bill Cutting… 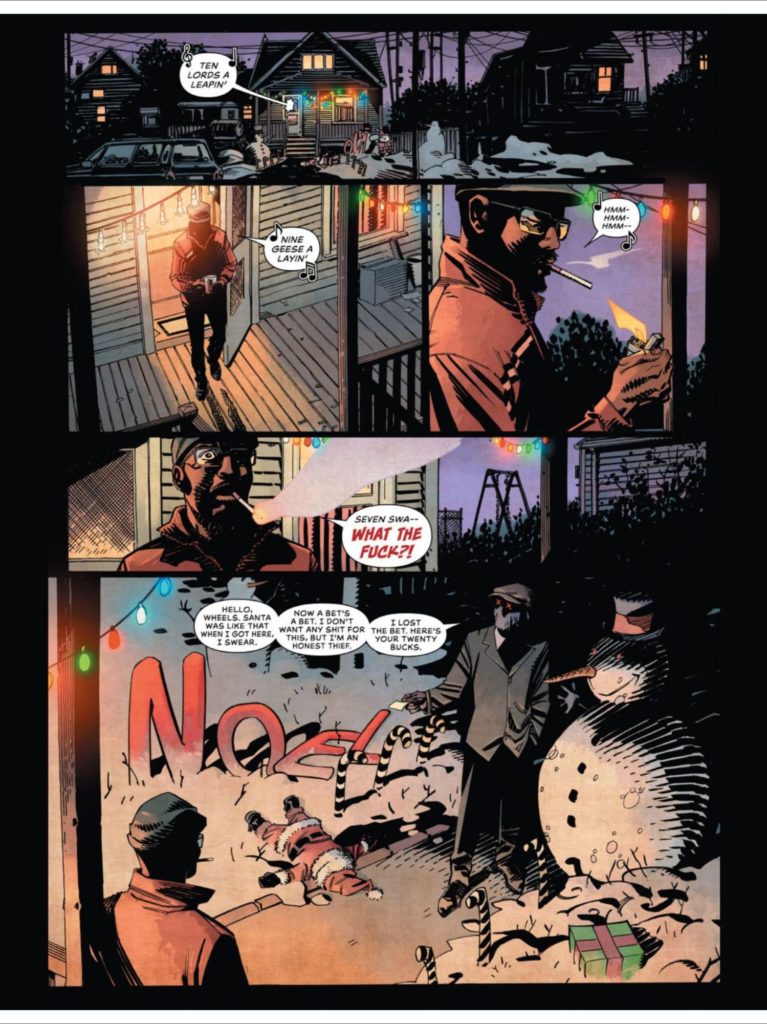 Now…here it is twenty years on, and Marty Dobbs is back under the hoodlum again. The 12 million simoleons he lifted from the Mob’s run dry after two decades of caring for his beloved wife, Megan, and her medical needs; and playing the daily meat-n-greet to the genetic misfires that shop-and-drop at Marty’s MalWart job ain’t cutting the mustard seed… Now, if Marty was a chemist, he’d probably make like Heisenberg and batch up some Blue in the Men’s can with the Shake ‘N Bake Method, and deal it to all the stray kids drooling down those WalMart aisles; but he ain’t, and he misses the Robin Hood Juice he gets from taking what’s rightfully his, from anyone foolish enough to cross his path or carry it large… Besides, how can a Dead Rabbithead resist going full-on Dexter with some douchebag who’s buying MalWart product to dissolve a dead body with??? Looks like it just became Dead Duck Season for a Sonuvabitch named Sam…

Dead Rabbit #1’s a new offering from the gang over at Image Comics, that just hit the stands this past Weds, on October 3rd, 2018. An APB has been issued to find and apprehend the outlaws responsible for this crime: Gerry Duggan (Deadpool), Story; John McCrea(Hitman), Pictures; Mike Spicer (Extremity), Colors; and Joe Sabino (Deadpool), Letters.

At present, the whereabouts of all four fugitives remains unknown…

Clay McLeod Chapman‘s Typhoid Fever takes us into the mind of Typhoid Mary, a former actress now patient. Unable to grasp reality, Mary views her world as a soap opera, struggling for control of “the story”. Her Doctor suggests he uses a cerebral inhibitor, an unorthodox method, to wall off her other personalities until there is only one left. He voices his hope that she will gain complete control of her mind and her powers; she’s a pyrokinetic and a telekinetic. It doesn’t go well, suffice it to say: it turns out she’s been skipping her meds, and set two orderlies on fire who were assaulting her. Choosing another method, Dr. Charles involves a mutant named Zachary. Zachary’s powers revolve around the ability to amplify her powers, but it doesn’t always work out. That brings us to the present, when Spider-Man leaps into the hospital, which was already under Mary’s influence, which then alters Spider-Man view of reality. Spider-Man attempts to fight off Mary’s mind altering, but ultimately loses his own memory, and leaves with Mary. Meanwhile, as Mary’s mental attack continues to spread and is covered by media, the X-Men watch and deduce this has something to do with Zachary, and they must intervene.

Stephano Landini‘s art and Rachelle Rosenberg‘s coloring are standouts in this book. From the pink tint of Mary’s soap opera POV of the world, to the harsh deep colored reality of what she’s actually doing, the two artists wonderfully capture Mary’s world, and I was uncomfortable to make the next page turn to see what was truly happening. The only thing that bothered me was the over-used multiple personality description we’ve seen so many times. Beyond that, it’s a solid trip. 3.5/5 Bibles.

Doctor Octopus fused with Peter Parker sounds like something that is either stupid or genius, with nothing in between. From the inside cover — “After dying to save the women he loved, Otto’s consciousness self-resurrected in the form of a body cloned from his and Peter Parker’s genetic material” — I was drawn into the comic from the first page. Starting off with tons of action, it starts off fast and doesn’t slow down. The rest of the story is spent filling you in on the entire “situation” that is going down, and ends with a huge exclamation.

Christos Gage (Daredevil, Law & Order) really did a great job keeping the reader interested the entire time as well as informing them of what is going on. The art, and battle scenes, by Mike Hawthorne (Deadpool, G.I. Joe) were very good. There were several panels that I just stared at for a few minutes, appreciating them. 4/5 Cloned Spider-Men agree.

Hecate, the goddess of witchcraft, attacks our favorite magical super team in Wonder Woman and Justice League Dark: The Witching Hour #1. This one shot is the first volley in a five part story that runs through October and is fitting for this ghoulish season. Writer James Tynion IV has been setting this story up in the first three issues of his Justice League Dark title and gives just enough info in the beginning of this one shot to update newbies on the mysterious goings-on.

Tynion clearly loves the characters comprising this team and gives everyone moments to shine in his story. Wonder Woman, however, is clearly the star of the crossover’s first part. It’s frightening to see Hecate have such power over Diana as well as the big name cameos in the book. The Witching Hour will clearly have ramifications for the magical characters in the DC Universe, and for Diana as well. Like he did with his Detective Comics run, Tynion absolutely excels at bestowing distinct voices in a team book. 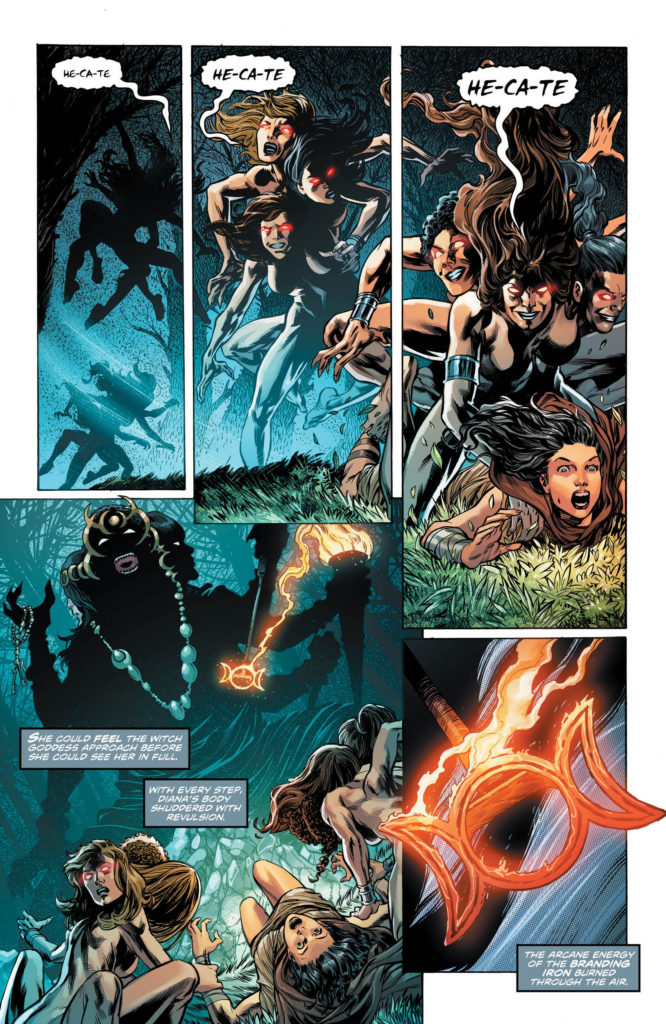 Artist Jesus Merino, and colorist Romulo Fajardo, Jr., bring a clean superhero style to the one-shot that gives the creepy events that occur a more jolting effect. From a three-headed goddess, to a room full of Swamp Things, Merino brings a simplicity to out of our world monstrosities that makes them that much more effective. Fajardo’s colors, although pretty bright, lend an air of dread.

If you love what Tynion and company are doing over in Justice League Dark, then you’ll love this first part of The Witching Hour. If you’re just in the mood for some Halloween fun, then this is definitely a treat. You don’t have to wait long for part two, since it’ll be in next week’s Wonder Woman! 4/5 Detective Chimps.

Confession time: I’m only just now discovering Iron Fist as a character. Sure, there are one or two issue of Heroes For Hire I’ve got that date back to the 1970s or so (bestowed by an uncle…I’m not THAT old), and I’m only halfway through season one of the show (I know, I know…it gets better. At this rate, I’ll be hitting up Defenders by March!) But stepping into this reintroduction is refreshing: no expository backstory, no bullshit origin, just Iron Fist getting into some weird fiction, as a demon has emerged to take on fortune-tellers and soothsayers, as well as torment Danny Rand by taking on the visage of a young boy he couldn’t save during a firefight on Coney Island. 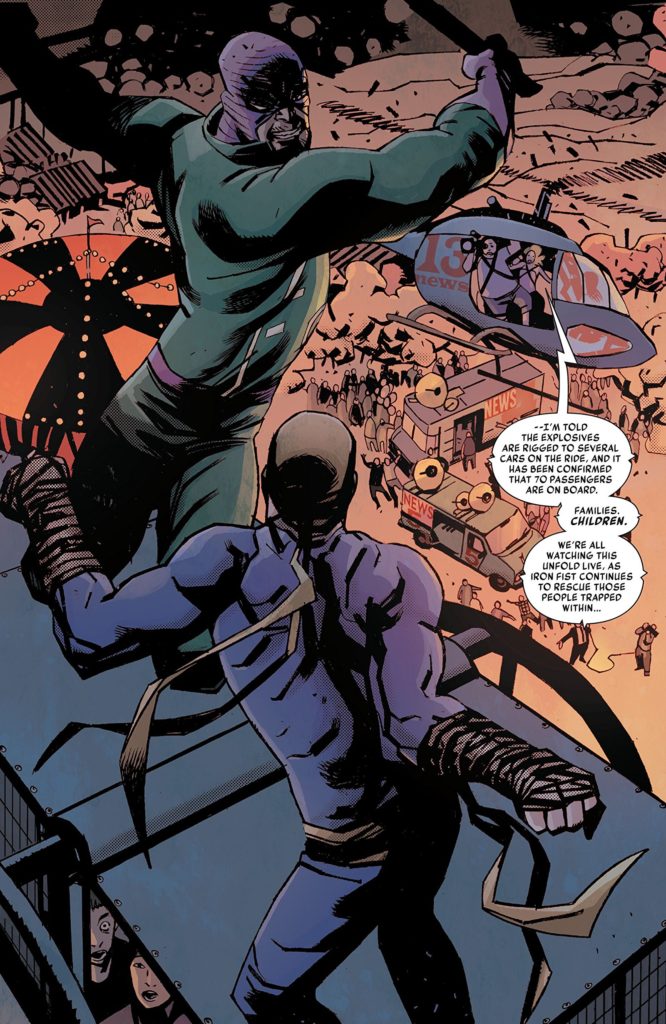 Iron Fist: Phantom Limb features the first two issues of this story, by Clay Chapman, focuses not only on Rand’s attempts to defeat his demon villain, but also regaining his self-confidence following his aforementioned failures. For a martial-arts-based character, there is a fair amount of Cronenbergian body horror…and I’m ALL FOR IT. From the deformed bodies of psychics and fortunetellers littering the city, to Iron Fist having his…no shit…right hand chopped the hell off, which then becomes animate and fights Iron Fist himself…artist Guillermo Sanna has great fun, which means you will as well as you read. With a great sense of movement, action, and composition, the art pops off the pages. It sets a great sense of mood, brood, and action, and some of the monster designs are gnarly as hell.

Having just realized how great this B-character is, it’s great to discover how action- and mystical-packed this series can be, and the fact that Marvel provided the first two installments of this series as one is an added bonus as well. If you can, pick it up. It’s a fun, action-packed read! 4/5 Severed Iron Fists.