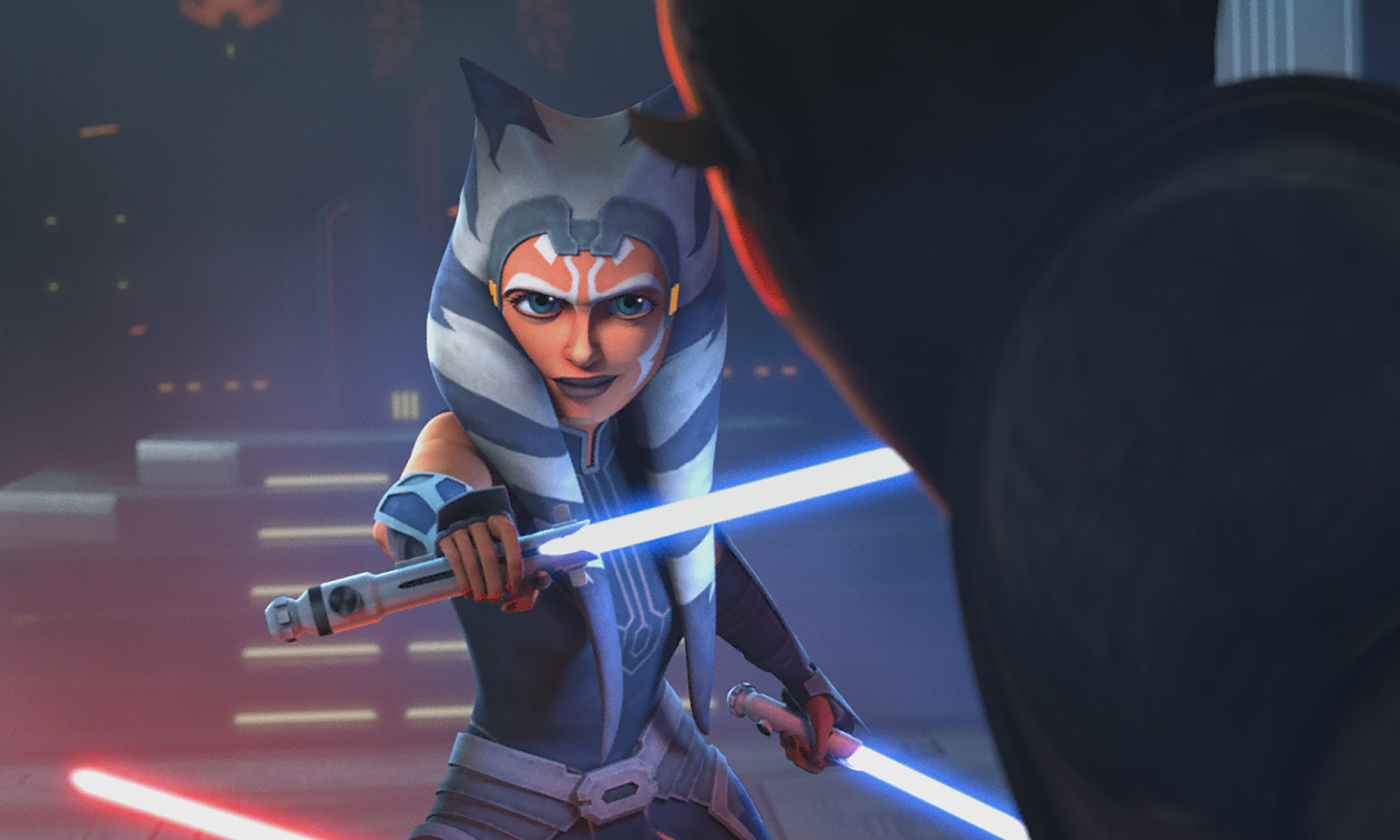 One reason that it’s a hell of a thing to even attempt to evaluate the seventh season finale of STAR WARS: THE CLONE WARS is it’s the third series finale this show has had. You don’t see that a lot. When production originally ended in 2013 after five seasons, it was a tense moment for fans, who had come to love our series POV character Ahsoka Tano (Ashley Eckstein), a character who embodied hope and light-side potential.

But mostly all of us could never quite break out of the oppressive baked-into-the-prequel-trilogy foreshadowing that we all knew where it was going if not exactly how it was going to get there, and there was no way that Ahsoka was going to make it out of this show alive… because she would have been raising hell across the galaxy with the Rebellion while the Skywalker twins were growing up, oblivious to their heritage…

Every time down through the seasons when Anakin Skywalker (Matt Lanter) smiled at his Padawan and they exchanged a moment of bonding or exchange of wisdom, often flowing in both directions, you had to wince because we all knew “Annie” was going to turn and she was probably going to be standing right next to him when it happened. So, it was crazy that Dave Filoni and crew veered hard left in original series finale “The Wrong Jedi” and had the Jedi Order wrong her to the point that she walked away from the entire deal even after her name was cleared. It was a compelling ending to the original series, though it certainly left her story open-ended (for STAR WARS REBELS to pick up later, it turned out).

Almost a year later to the day, Netflix picked up the series for streaming and paid for another season. Fans were delighted. This new season—available in one great gulp as is the Netflix way—was deep quality, though Ahsoka was nowhere to be found. The second series finale, “Sacrifice,” concluded a Yoda trilogy, the wizened Jedi Master journeying to the ancient Sith planet of Moraband but only able to articulate vague foreboding of what we had already seen unfold a decade earlier in EPISODE III: REVENGE OF THE SITH. It was kind of an off-kilter way to end the series, not even bothering to cliffhang into General Grevious’ (Matthew Wood) abduction of Chancellor Palpatine (Ian Ambercrombie) to set up that last Lucas film — the way the original THE CLONE WARS series finale by Genndy Tarkovsky did — but hey. We were all grateful to get another season of Filoni’s deeply satisfying character work.

But then last year came the announcement. Season 7 of THE CLONE WARS! The final final season! For real this time! The oft-referenced Siege of Mandalore! The return of Ahsoka & Rex! More lightsaber-slashin’ fun in the swashbuckling Star Wars tradition! What we didn’t know until well into the middle of the experience was that we were really getting a new entire trilogy of movies.

The first episode starts up with Rex (Dee Bradley Baker), who we thought was the sole-surviving member of that unit of clones we’d been tracking since childhood/indoctrination way back in “Rookies,” the fifth episode of the series. Turns out Rex wasn’t the last survivor, and these first four episodes provide one last round of classic Clone Wars action with Obi-Wan (James Arnold Taylor) and Mace Windu (Terrence Carson) decimating ranks of battle-droids, as well as the introduction of Clone Force 99, The Bad Batch, a unit of extremely individualistic clones who in only four episodes give our original focus group of clones a run for their money in terms of coolness and watchability. Events escalate and came to a natural resolution at the end of the fourth episode. And we never see these guys again.

The fifth episode did what I thought that Friday night was a wonderful insane trick, just picking up with Ahsoka immediately after the end of the fifth season and introducing a new pair of sisters as foils for her new adventures. The first week of that was very cool. The second week was solid, but when matters didn’t resolve, I for one started looking at my trusty holographic episode-meter with a wary eye. We were already six episodes down out of twelve. Maybe Ahsoka and the Martez sisters’ story was going to end next week, but Filoni was burning narrative real estate.

One of the great elements of this series has always been its near-anthology format. Every episode, you never knew what characters or planet or sort of mission you were going to get. It could be an extended Obi-Wan arc, or an extremely extended Darth Maul arc, or checking in with Rex and his brothers as their numbers dwindled, or Anakin & Ahsoka, or Mace Windu, or Asajj Ventress, or whatever. It was always a slam-dunk except that one time in the first season when it was just a Padme/Jar-Jar episode, which even she couldn’t save. But no, this Ahsoka deal turned out to be a four-parter as well, basically AHSOKA: SEASON SIX, bringing her directly from exactly where we left her those two season/series finales back right up to the ninth episode.

I wound up enjoying that second arc after reconciling myself to the idea that there was no more time to be flitting around the galaxy and the ending was almost upon us, but also in hindsight, a couple weeks after it’s all ended, realizing that this arc wasn’t filler at all, even though it veered dangerously close to feeling that way in the moment. The Martez sisters (Trace = Brigitte Kali, Rafa = Elizabeth Rodriguez) completed Ahsoka’s training, reigniting her desire to be selfless and willingness to sacrifice herself for the galaxy after walking off Season 5 as “the wrong Jedi.” It’s terrific character work from Filoni bringing her all the way up to her full heroic potential that never got realized during the show’s original run.

The reason that that middle Ahsoka arc tested those of us lucky enough to watch it unfold in real time is that we were expecting Filoni to compose a symphony with this season, weaving together threads from, of course, Clone Protocol 66 and the rest of EPISODE III, but then also finally reveal The Siege of Mandalore and then also actually potentially manage to set up further adventures bridging this series into REBELS because just as we all knew the final fates of all the Jedi involved in these last days of The Clone Wars, we also knew that Rex was not going to, in the end, be able to execute his own true and personal Order 66 on Ahsoka and that they were going to wind up on the bridge of Hera Syndulla’s Ghost nearly two decades later. However this last arc beginning with Episode 9 played out, it had an enormous amount to live up to.