Happy Sunday, fellow geeks. Another weekend has come and gone, and we’ve got some great titles to review, by some great writers (at least enough to keep you occupied until the next issue of Doomsday Clock is published). Grab a hot toddy, settle in, get out of the cold, and let’s dive in…

In a touching tribute to his creators Len Wein and Bernie Wrightson, Swamp Thing gets a deliberately paced story that reexamines the pathos subsumed beneath the monstrous facade. Writer Tom King and artist Jason Fabok take plenty of time telling this standalone tale of Swamp Thing’s efforts to protect a young boy from the dangers of an unseen Snow Monster. Despite his monstrous appearance and stilted affect, King manages to  get to the core of Swamp Thing: the quiet heroism; the selfless sacrifices (at one point ripping off his own hand to use as kindling); the introspection that makes Swamp Thing one of the more fascinating characters in the DC pantheon.

Although I am more familiar with his appearances in Hellblazer, this issue packs a lot into its pages, and allows for exactly the sort of quiet characterization that a character of this type deserves. Swamp Thing has always always been a bit of a mystery to me, but this story…deliberate, grounded, emotional, and not requiring a lot of familiarity with the character…helped me to understand his appeal. Given the sort of work that Wein and Wrightson did in the past, this issue was a great way to honor them and the work they’d done, and the influences they’d provided. The art was lush, the story emotional and human, and the character himself tragic and selfless…as someone living in The Green would tend to be. This is a fitting tribute, and a great standalone. Track it down if you can. 4/5 Bibles.

Jean Grey is back! As one of my favorite X-Men of all time, I am super excited to see her returning to the pages as the strong, loving compassionate woman she is. Tom Taylor quickly draws you in with a very familiar story if X-men saving a teen from inevitable doom as they are coming into their powers, that was very similar to Jean’s first appearance. The new team looks to be very interesting, with even Namor joining, instead of hiding in Atlantis. Jean has set out to take over where Xavier left off. Building a world safe for everyone.

This first issue is a very quick and almost nostalgic read, with very eye catching art by Mahmud Asrar. There’s one page that I wish I could have as a poster. It brought me right back to my childhood, only now I understand the politics more. The ending, though, made my jaw drop. No way did I see that coming! It was such a great way to introduce a the big baddie, while simultaneously throwing a wrench in readers faces. I will be “The Red” for a very long time. 4.75/5 Bibles

Milk does a body good. That’s what they WANT you to think. The Doom Patrol is here, so things are going to get weird, and weird FAST! How weird? How about a Milkman in the suburbs delivering milk that might be deadly? No? Fine. How about The Main Man himself, LOBO, in a smoking jacket with a pipe in his hand like he’s trying to win second place at a BING CROSBY cosplay event ? Like most Doom Patrol stories, nothing seems to makes much sense in the beginning; it always feels like I missed a part of a story whenever the DP drop in. But its always intriguing enough to keep me interested until things eventually start adding up — which is exactly what happens here in the first DC/Young Animal crossover.

The Doom Patrol are mixed up with a corporation called Retconn, which has started conditioning Earth-Prime to give it broader audience appeal before selling it to Lord Manga Khan. Retconn is in the business of “reality estate,” and is smoothing out Earth-Prime’s “idiosyncrasies” — by creating its own 1950s-style versions of Earth to spread the company’s brand of milk. You see, it’s homogenizing milk. Ahhh, so much crazy weird energy! Thanks a lot, Morrison! Here in Happy Harbor, Rhode Island we are treated to some striking visuals when the Doom Patrol go toe to toe with the Community League of Rhode…. hey wait a minute! That’s the JL of A! Vixen! The Ray! Killer Frost! Lobo, too!  It’s that rag tag “don’t call us the Outsiders, but that’s who we REALLY are” team of ex-villains and line-steppers that Batman has put together before he got wrapped up in that Metal thing going on elsewhere  Hey, there’s even a crazy two page spread where their debut issue covers are shown to help them remember who they really are ! Even that Milkman his hiding a secret or two! 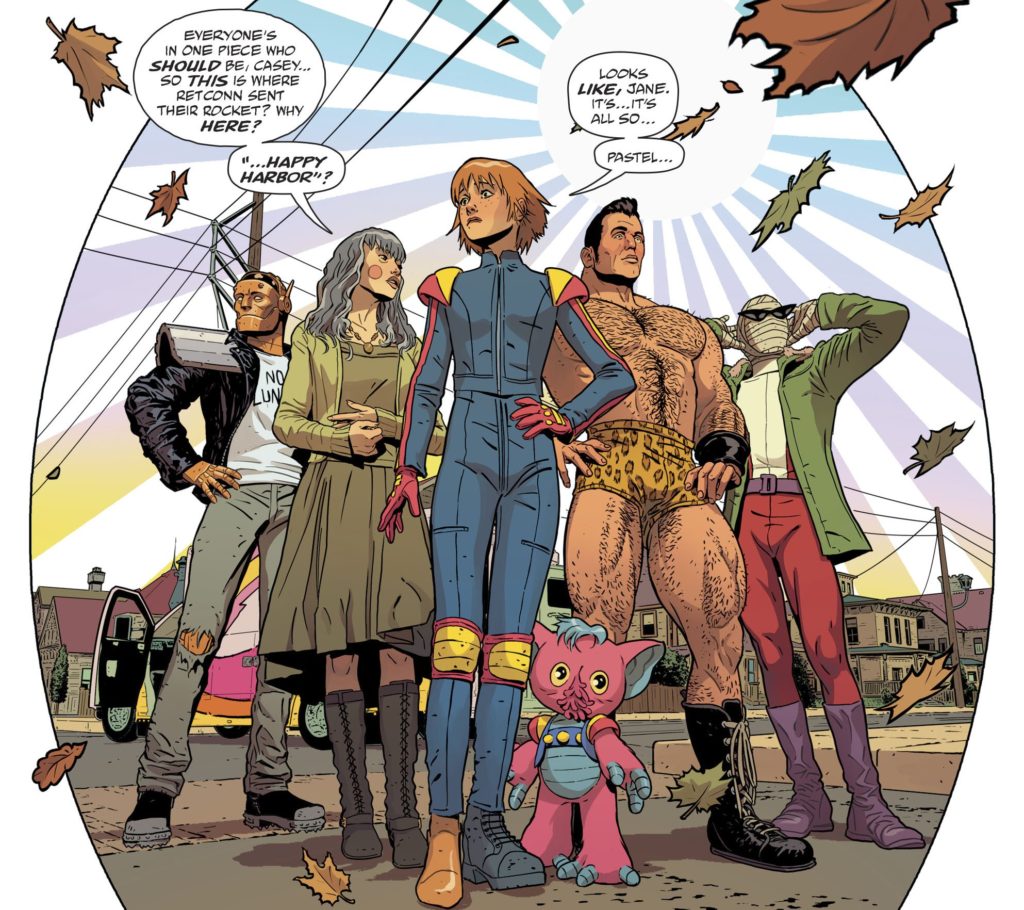 Steve Orlando and Gerald Way along with artistic powerhouse ACO have attempted to wrangle the weirdness of Doom Patrol and smash them into the DCU proper to deal with Retconn and Lord Manga Khan!  This series is designed to help set up the second “season” of the Young Animal Imprint. Sadly, the first wave didn’t get off to the best of starts when the flagship title THE DOOM PATROL slipped on the schedule more than once. But through this crossover fans of the DCU will be able to safely sample such books like Mother Panic (who’s already in GOTHAM), Cave Carson and his Cybernetic Eye when he teams up with Swamp Thing, etc etc as this event unfolds over the next few weeks. It’s challenging to follow along with what’s happening if this is your first tasting of  the Doom Patrol, but it IS a pretty decent place to start. 3/5 Bibles.

Hey GHG flock, Marvel’s got a big Cosmic crossover event coming soon and it all starts here with Infinity Countdown: Adam Warlock. Not much is revealed here, other then the fact that some Big Baddie is probably going to steal/collect all the Infinity stones and reek havoc on the Marvel Universe killing our hero’s and causing all sorts of property damage.

What we also get is somewhat of a refresher on who and what Adam Warlock is for those that aren’t familiar or just maybe forgot. Kang the Conqueror is pulling Adam’s strings in this story showing him a glimpse of what’s to come and warning that he may be too late to stop whatever and whoever is out to destroy everything we know and love. Greg Duggan does a good job of capturing Adam and Kang’s essence a-la Jim Starlin who has written Adam Warlock since the 90s and Mike Alfred’s style really captures that Golden Age comic feel and fits the story perfectly. All in all, this is a good prelude to what seems to be Marvel’s Infinity War Movie companion story. 4/5 Infinity Gems