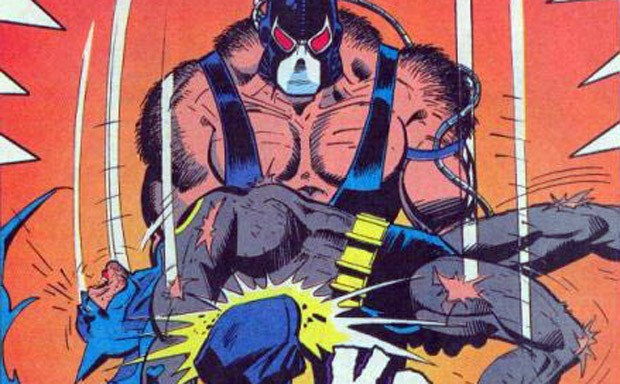 Anyone else go back, read some old Batman (or Secret Six) tales and think of Tom Hardy’s intoxicatingly muffled parlance when reading Bane‘s dialogue?

Well, try it! It’s more fun this way, if you dare.

We last saw Bane heading to Arkham in a Gotham PD paddywagon after Six scribe Gail Simone sent (forced, perhaps) the rest of DC’s most beloved antiheroes towards their ambiguous end. The end of the Secret Six (Catman, Deadshot, Scandal, Ragdoll, and about 9 others. Uh.. Six?) proved a major bummer for the cult comic following who dedicated their monthly 3-bucks to Simone’s — and her ever-talented penciler Nicola Scott’s — fantastic run. And since I wasn’t sucker enough to buy into the walking estrogen tank’s reemergence in the New 52’s The Dark Knight title, I got to say.. I miss me some Bane. Especially the one who, much like one we’ve seen in The Dark Knight Rises, swarms the gray areas between brutal savagery and admirable intentions.

Sorry David Finch, but Batman vs. Bane vs. the “White Rabbit”.. really?

I asked Batman writer Scott Snyder in this interview if he ever intended on using characters from Nolan’s masterpiece, and he thankfully declined. Maybe somehow Grant Morrison can import Rush Limbaugh’s famed “liberal conspiracy” into the current continuity of Batman Incorporated. You know, a comic that average moviegoers would possibly have an interest in. Possibly.

[Disclaimer: We were going to review Batman Inc. #3 in cohesion with our Batman Week, but comics were sent back to press with the controversy surrounding the Colorado shootings.]

If not, here are five Bane stories you can find if you want to impersonate Hardy’s strangely-addicting enunciation while reading some Bane confabulation. Yeah, there’s a reason why I haven’t been on a date in a while.

5. Batman: Venom – This book doesn’t actually include Bane at all (which says a lot about the villain’s bookography!), but imagine a tale where Bruce Wayne accumulates Bane’s physical powers, and relies on the same performance-enhancements that forced Barry Bonds to give up his life. Believe it or not, reading Venom will give you a better understanding behind Bane’s thought process.

4. Secret Six: The Darkest House – Either Simone heard Nolan’s headline villain announcement beforehand, or played into this end game all along, but Bane’s inner demons come back to haunt him to what proved to be the saddest Secret Six tale to date. Well, that’s because it was the last. If I had any problem with the “New 52,” it was first, the announcement of Bruce Wayne taking back his reign of the Cowl (which was pretty juvenile of me to argue) and the cancellation of Secret Six. Not only was it the best villain team book out there; but it was the best team book, period. In “House,” Bane regained his lucha-mask, his demonic personality, and loses any sort of sensitive persuasion he may have accumulated being around Scandal. No, this Bane set out a Gotham do-goodie kill-list: Tim Drake, Jim Gordon, Stephanie Brown, Michael Lane, and Helena Bertinelli. Or for the comically-inclined Red Robin, Commisioner Gordon, Batgirl, Azrael, and Huntress. Another prime Batman rogue gets involved. Flashbacks occur. Shit hits the fan. End game. Fans cry.

3. Batman: No Man’s Land, Vol. 4 – Believe it or not, this story impacted The Dark Knight Rises as much as our winner did. Though Bane was merely under the employment of “The Total Package” Lex Luthor during this mass undertaking of Gotham — which had a similar earth “shakedown” in the film — it’s by far the second biggest story in the villain’s career. That, and Bane and Batman appear to do nothing but squabble throughout their confrontation — far from the epic, highflying haymakers of Nolan’s threequel.

2. Batman: Legacy – Bane revives from the aforementioned Venom sweet-tooth (and the dire events of our winner, below) and goes on to search for his papa. Although the film isn’t clear — or is it? — whether Ra’s al Ghul is that dad or not, similar circumstances occur when the leader of the League of Assassins (Shadows? Err.) takes the young man under his wing. Just like the film, the “legacy” is to plague Gotham with pure horror.

1. Knightfall – Duh. This is clearly the story that influenced Nolan’s decision to use the hulking leader of the 99-percenters in the first place, as Bane proved the “evil” version of the Bat he breaks. As The Dark kNight becomes more than just a man (i.e. an improbable haunting figure of attrition) in the events leading up to this “Knightfall”, Bane is the one who feels it’s his legacy to put an end to The Batman. The enigma here, essentially, is the notion of the superhero getting in over his head; not just the mere one-on-one battle with this “evil Doc Savage” of a man called Bane. And although the intellectual steroid-abuser happens to be the fin de jeu for The Caped Crusader, he’d go on to lose his mantle of criminal underworld leader when faced with more than a Bat-substitute named Azrael: the fact Bane’s mental state forever remained the prison he was similarly forced to grow up in.

Any book bound for MarvelNOW‘s cancellation. Jonathan Hickman’s typically stellar FF, also known as Future Foundation, was a wash about the Inhumans, without a peep from the Richards children and alien juveniles we’re so very fond of! Incredible Hulk has been far from that — even when the art finally did match Aaron’s output with Pasqual Ferry’s output a month ago — but it’s nearly tiring. I’m surprised I haven’t dropped this yet (too close to the end, I suppose). Hell, even the Captain America book is slowly becoming uninteresting! As for the rest of the pile, the Amazing Spider-Man, Avengers and the Kitty Pryde & The X-Men (eh?) titles — while decent reads this week — still didn’t push themselves to the promised brink in their storylines, “No Turning Back” and “Avengers vs. X-Men”. Call it: enjoyable filler.

Patron Saints of Comic Scripting Awesomeness.. of the Week:

Geoff Johns. Rick Remender. Dudes, if ya don’t know, you’ll never. This is the first time at God Hates Geeks that we’ve had only 2 writers own the Parish Picks of the Week, as both of Johns titles this week, Aquaman and Green Lantern burns right through the punchlist (though pretty much every DC book I bought this week was good), while both of Remender’s team titles, Secret Avengers and Uncanny X-Force let us know why its forthcoming combination this fall, well, uh, yeah, Uncanny Avengers is going to give Hickman’s Avengers ongoing a good run for its money. It’s great to see Johns challenge Batman‘s Snyder for top gun, just as Remender and Hickman shift almost monthly. Competition is good, people. Not that any of these men will ever admit the similar back-office engagements both Brian Bendis and Jeph Loeb have been in. Boom.

Epic Fail of the Week:

I bought Venom #19 without looking at the rack clear enough to realize I needed #21. More of a fail? I read #19 at work yesterday, wondering why it read so familiar without realizing I had read the comic a month ago. Good enough news, Cullen Bunn and Rick Remender’s “Savage Six” storyline remains stellar — at least from the reviews I gathered today.

Oh, you wanted to know more about RAW #1000? Well, if you didn’t see that amazing show already, you’re as idiotic as the guy who “forgot” to do a write-up about it…

See you next week.