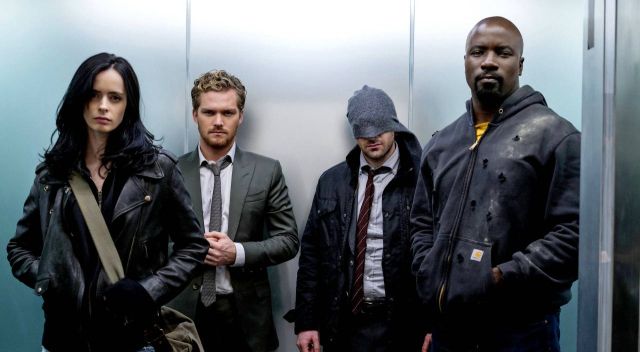 KEVIN “Pastor” PALMA: JD, we’re finally here, man. The Defenders, the culimation of the first phase of Marvel Netflix shows, has arrived. It’s kind of hard to describe my initial excitement — a phrase I feel like I’ve said for each of the Netflix shows — and with good reason. The street level heroes were the ones I grew up with, beginning with Brian Michael Bendis‘ Daredevil run which used all of these characters at some point; using that as a jumping off point to Power Man and Iron Fist and eventually Alias. Where were you at coming in to this show?

JADARREL “The” BELSER: I’ve been ready for the show since day one. When they announced that these four shows will be coming out like 3 or 4-years ago, I was already ecstatic. Then, the fact that they would be commencing together in an Avengers-like mega mini-series made things even better. Now I have watched all four of these shows (my least favorite being Iron Fist), so I have a great grasp on the narrative. But, how about we talk about a little bit of the history of the Defenders as a group?

KEVIN: Well, that’s the strange thing about this team isn’t it? Outside of Luke Cage, none of these other characters are really associated with any teams. Iron Fist has been in a couple of incarnations of Defenders teams, but is mostly known simply for his partnership with Cage; Daredevil and Jessica Jones were both members of the New Avengers during a weird period for that team, but both are known for operating on their own. I think the biggest testament to this entire endeavor is that, though the individual stories and the circumstances that bring the team together do differ from the comics, the roles these characters take up in this team feel both true to the comics and, more importantly, like logical progressions to the character work done in the individual shows.

JD: Yes, it is very clear we’re watching it that each character takes on a specific archetype that comes with superhero team situations. Daredevil, the more seasoned member of the group, emerges in the role of the leader. Even though he is a skeptical at first, his confidence and experience make him the natural choice to lead this rag tag group opt outsiders. Luke, obviously, does most of the heavy lifting as the main source of strength not unlike The Hulk or The Thing. It’s not just his physical strength they utilize; Luke’s moral strength and common sense makes the foundation for this group. Jessica Jones is that ‘Hawkeye/ Quicksilver’-like wild card. You’re not sure if she’s going to follow the rules, but you can be sure she’s going to have a smart-ass comment to go with an order. Danny represents a more childlike aspect of the group. While very powerful when need be, his naivete tends to get him into very sticky situations. Which member of the team did you enjoy the most and the least?

KEVIN: Honestly, I’d actually go a little further with Luke Cage’s role in the team. While Daredevil is the clear leader, Luke actually feels like the moral center of the group in a similar way to Captain America. As for my favorite team member, that’s a difficult call because so much of my enjoyment came from the interactions between characters. It was obvious that they would partner up Luke Cage and Iron Fist, so by default they paired Daredevil and Jessica together and that turned out to be my favorite pairing. Picking between those two is difficult, but ultimately I’d say it was Jessica. As much as Daredevil’s arc was portrayed as a heroic sacrifice, they also didn’t shy away from the fact that it was also in part driven by selfishness and self-loathing. On the other hand, Jessica’s arc is all about being more accepting of people trying to help you out and as good as both portrayals were, I’m always going to enjoy the more positive journey more.

Earlier you mentioned that Iron Fist was your least favorite show and not only do I agree with you on that, but in my review of the show I actually ranted about the fact that Iron Fist was the worst character and the same holds true here albeit to a lesser degree. In Defenders, his character’s elevated through his interactions with the others, particularly Luke, but he still maintains a naivete, as you mentioned before, that’s childlike and charming when he’s interacting with Luke but obnoxious when arguing with anyone else, whether friend or foe. What about you?

JD: My personal favorite member was Luke, since I really lovd his story the most. Daredevil was kind of a self-loathing type deal; Jessica hadn’t really changed at all; and Danny? Just plain old.. annoying. Luke, however, was the most focused and, for me, the most fun. I’m pretty sure we both agree that Danny is the worst character of The Defenders. I don’t blame the actor Finn Jones as much though. It’s more along the lines of the dialogue given to him. His attitude, overall, is very unlikeable, nearly to the point where I hate his character as much if not more than Karen Page. Now let’s talk Easter eggs. Which ones were your favorite and how many did you spot?

KEVIN: You know, I didn’t really feel like this series was as loaded with Easter eggs as the previous were, perhaps due to the fact that this series had so much to accomplish in fewer episodes. There were the obvious allusions to classic partnerships that seem to be on the way: Misty Knight missing an arm with Colleen Wing sitting by her side; Danny Rand crouching on a rooftop in a Daredevil-esque pose before his fist lights up; Matt Murdock laying unconscious surrounded by nuns who alert Sister Maggie when he awakens; and of course, Luke Cage with a shirt full of bulletholes standing next to Rand with his glowing fist. I loved the Sister Maggie moment, as it seems to hint that Daredevil Season 3 could be an adaptation of one of my favorite stories ever, Born Again.

However, my favorite would actually be the Luke Cage and Iron Fist team up in the first fight at Midland Bank — an entire homage to Power Man and Iron Fist — from Luke bursting in through the door to Luke standing in front and taking bullets for Danny to the two standing side-by-side against seemingly insurmountable odds. The moment Run the Jewels came on to announce Cage’s arrival, I lost it. I was fistpumping and yelling in excitement throughout every moment in that scene, especially when Luke stepped front of Danny. I guess this is actually already leaning into my favorite scene overall, which was the entire first fight at Midland. The only part of that scene that topped the Power Man and Iron Fist allusions was the amazing Daredevil/Elektra fight in am office. Were you able to spot many more Easter Eggs that I missed or do you think I was right in my assessment that this series was actually pretty short on them? Also, let’s get into your favorite scene…

JD: You ran through most of the Easter Eggs I found. Jerk. Ha–however, in the scene in the hospital with Wing and Knight after Misty’s arm is cut off, look at the medical chart behind Colleen. The nurse listed is ‘L. Carter’ (an allusion to the original Night Nurse Linda Carter) and the doctor is ‘E. Wirthum'(an allusion to Spider-Man villain Cardiac). That scene indicates that Misty will be receiving her famous bionic arm from Rand Enterprises (rather than Stark Industries, as it is in the comics). My favorite scene is the huge final battle under Midland Circle with the Defenders united against The Hand.

KEVIN: As cool as it might be to actually get some larger connections to the extended Marvel Universe, getting Misty’s arm done through Rand is a great touch. That statement is actually a microcosm of how I felt about this series as a whole: I wish there were more connections to the extended MCU and I would love for these characters to interact with the main MCU characters; but this series, and all the individual series as well, works well on its own and both of those points are because of just how strong and well-developed these characters are. As good as both of the fights at Midland Circle were, my favorite parts of this series were the character interactions. Even the weakest of those characters, Iron Fist, was elevated through his interactions with the rest of the team. More than anything, this makes me hope that the Marvel Netflix shows don’t make the same mistake the Marvel movies made and keep everyone completely separated in phase 2. Any final thoughts JD? 4.5/5 Fingers of the Hand.

JD: Overall, The Defenders is a great culmination of all the things Marvel Netflix has done so far. There’s a seamless integration of the current storylines into what eventually became this mega series. Also , the supporting casts of all four shows coming together was equally as dope. I loved seeing all the regular people caught up in an extraordinary situation. Like The Avengers on the big screen, I can’t wait to see them together again (yeah, even Iron Fist). 4.75/5 Bibles.