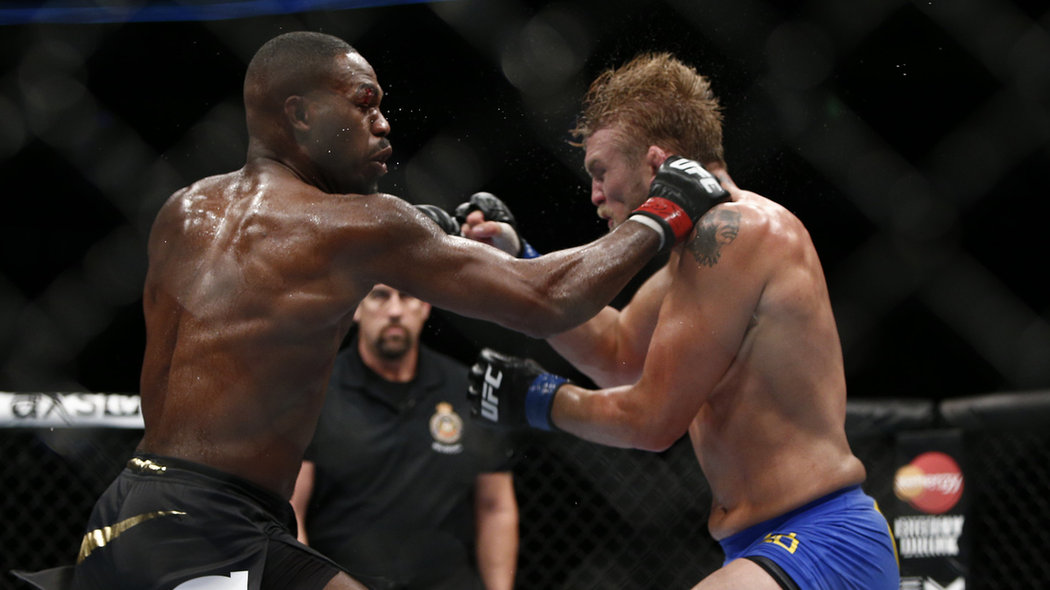 2013 was a fantastic year for fights: Hunt vs. Silva (sorry about that PED suspension, big guy), Weidman vs. Silva (sorry you finally got caught clowning, Spider), Jones vs. Gustafsson (sorry walking out to Avicii didn’t put the judges on your side, Alexander), and Melendez vs. Sanchez (sorry this wasn’t a five-rounder, fans).

It would be apropos and prudent to do an end-of-the-year write up about the best fights of 2013, but the Internet is abundant with those. Here’s the Google search, just CLICK. Me? I’m a forward-thinking fellow. I’d rather look to the future and talk about the fights we’d be lucky to see in 2014.

I know what you’re thinking, I do. The California Kid got embarrassed in every facet of the game when these two met for the interim bantamweight belt in Dominick Cruz’s absence. Barao took a page from his friend and training partner, José Aldo, and used devastating leg kicks and an active jab to keep Faber’s violent takedowns and guillotines at a safe distance.

Barao, along with Aldo, is as dominant a champion there is in the UFC today. He hasn’t lost since his debut in 2005. The Brazilian deserves all of the accolades he’s received. He fights Cruz next month, and I expect him to make quick work of the champion – not because Cruz is a poor fighter – but because two years of ring rust and rehabbing from a knee surgery doesn’t prepare you very well for five rounds with a guy the caliber of Barao.

The de facto fight is a rematch with Faber, and I think things could be very different this time. Faber is a different fighter since Duane Ludwig joined Faber’s Team Alpha Male as “head coach.” Ludwig has provided a focus Faber never had before. Because of this, Faber holds at least a “choker’s chance” in the second go around. It’s a main event that needs to happen.

We are, most-likely, going to have to see another tilt between Junior Dos Santos and Cain Velasquez in 2014. It will be sharp and technical. It will be heavy-handed and bloody. It’ll end with one man being knocked unconscious. That man will be Dos Santos. Cain Velasquez will still be Heavyweight Champion of the World.

That doesn’t set well with Josh Barnett. In the months surrounding, Barnett will work his way up the Heavyweight rankings, which some people believe he should top. One look at Barnett takes you back to the good ole days of the big guys. The Mark Colemans. The Tank Abbotts. The Brock Lesnars.

The difference between Barnett and those bangers is “The War Master” is a wizard in the submission game – a fundamental those fighters sorely lacked. His first challenge will be this weekend in the form of hard-hitting Travis Browne.

Browne doesn’t have near the wrestling skill of the last man who defeated Barnett, Daniel Cormier, but no one does. Cormier was in a class all his own, and, now that he’s set his sights on dropping down to Light Heavyweight because he doesn’t want to fight his training partner Velasquez, it opens up a spot for a contender. In steps Barnett.

Barnett likes hot rods, Megadeth and bashing skulls. He’s the All-American bad ass. He’s the UFC’s wet dream. If Barnett handles Browne this weekend, a fight versus Velasquez is bound to happen. I can’t tell you what the result will be, but there will be fireworks. Or maybe just one bomb.

Did you see the first one? ‘Nuff said.

Side note: I do not think that Jones will get by Glover Teixeira unscathed. He might even lose the belt.

The French Canadian will be back. I’m guessing it’ll happen by the end of the year. GSP is a champion. He walked away as a champion, and right about now, he’s partying it up in Miami as a champion.

Thing about that is, he’s never partied. He doesn’t know if he likes it. I bet you dollars to donuts he doesn’t. I’m willing to bet, in the middle of a vodka soda on South Beach, Georges is going to look around at the hangers on and realize that he doesn’t feel quite right in his surroundings. He’s going to realize he doesn’t like the beat of the house music as much as he enjoys the rhythm of the speed bag. He’s going to call Dana White, and Mr. White is going to tell him he can come back on one condition.

The condition? He fights Hendricks as soon as possible. I like it. You will too.

Dana White has proclaimed that people want to see Belfort fight the winner of this weekend’s rematch between Weidman and Anderson Silva. Personally, I’ve seen enough between The Phenom and The Spider. I’m not sure Silva can get excited for that match again.

Belfort and Weidman could be a watershed moment for the UFC. The old guard (Belfort) versus the next generation (Weidman) in a battle of bangers to decide which direction the Middleweight Division will head in the next few years.

Make no mistake, even with the Belfort’s controversial use of TRT, what he’s accomplished over DECADES of competition is something to celebrate.

Also, here’s a little-known fact that isn’t much of a secret: PED use in MMA is wide and rampant. My estimation is that it’s more common than steroid use in baseball during the late ’90s.

That is an entirely different write up, and that write up will most likely ensure that I’ll never have access to fighters I don’t know personally — because people will fear the repercussions if any actual investigative reporting is done.

I digress. Belfort vs. Weidman is a match we need deserve to see.

The Showtime kick. Pettis’ Showtime kick on Ben Henderson when the two met in WEC is probably one of the most replayed clips in Zuffa history.

Something most people forget (or never knew) is the kick didn’t knock Henderson out. Instead, it just knocked him down, though it was the reason Pettis won a close decision.

Their second meeting happened in 2013 at UFC 164, and it was a ridiculous disappointment. Henderson didn’t get a chance to show his trademark work ethic or his technical acuteness. Pettis won by putting him in an armbar you learn to defend as a white belt in BJJ.

We deserve another Showtime kick.

At the very least, we deserve a grind-it-out victory.

These are two extremely entertaining fighters. They can do it again, and they will. It’d be a good idea even if Henderson didn’t have a rematch clause in his contract.

Ian McCall vs. Anyone –

First of all, Ian McCall’s nickname is “Uncle Creepy.” I’m not sure you need another reason to want to watch this guy fight, but I’ll give you a few:

2. His nickname is Uncle Creepy.

3. McCall is a recovering addict, and he once OD’ed on a combination of Oxycodone, GHB, Xanax and “other tranquilizers.” I’m pretty sure if any normal human put a combination of those things in their body, they’d spontaneously combust. Did I mention this guy fights at 125 lbs?

4. His nickname is Uncle Creepy.

5. In July, McCall announced via Twitter that he caught Bellator fighter Rob Emerson engaging in sexual activities with his wife, with whom he has a daughter. e.g., He needs to enact revenge on someone.

6. His nickname is Uncle Creepy.

Right now, he’s slated to face Brad Pickett on March 8 in London at UFC Fight Night 37. Let’s hope we get three McCall fights this year. Maybe Dana White will even bring Emerson over from Bellator, so Uncle Creepy can enact revenge on the fighter who deserves it.

UFC 168: Weidman vs. Silva 2 is live on Pay-Per-View from the MGM Grand Garden Arena this Saturday, December 28.