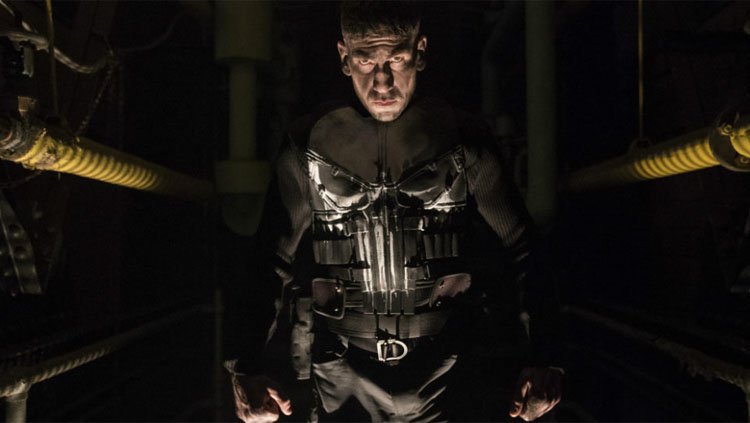 !!! WARNING !!!
The following review for Netflix’s: The Punisher, Season 1, may read as a Spoiler of War. To avoid any claymores of the mind, you are advised to abort this mission immediately. This is your final warning!!!

Despite the reality that America’s seemingly bullet-holing down the imperialism dustbin (with our nation arguably a failing empire born of another, based upon the pathological roots of: genocide, slavery, racism, sexism, and perpetual warfare), it seems inevitable that conjecture will ensue amongst some of us geekeratti, as to whether, or not, the arrival of Netflix’s latest Marvel installment, The Punisher, Season 1, is one of timeliness, untimeliness, or perhaps even…timelessness???

Our whirled-up world has seemingly gone full-on Willy Pete (military slang, for white phosphorous ordnance that literally melts flesh from bone), being turned-and-burned from upside down to inside out, as the United States continues to experience one or more mass shootings a day; amidst ever-increasing political turmoil that’s become even greater spectacle than P.T. Barnum could’ve imagined. At the time of writing this review, we’ve surpassed over 400 mass shootings so far, for the year 2017 alone, and we still have 38 days to go before this one’s done.

The red-black-and-blued story of Frank Castle is one that’s initially made in America, forged within the machinations of the military/industrial/media complex, outsourced to engage in clandestine and illegal operations overseas, and then imported boots-back-home-on-the-ground again to re-assimilate into civilian society and social media; this, with all manner of war-torn manifestation flowing through his shell-shocked psyche and fractured fleshbreak. Initially conceived by Gerry Conway as a one-and-done villain for Marvel’s Peter Parker to websling away into arachnidian oblivion (see Spider Man #129, from 1974), the Punisher has transmogrified from a largely one-dimensional, psychotic killer, into a morally-conflicted anti-hero living in a world of gray boundaries that he continually cluster-bombs into mind-melting organ splatter. Or, is he merely the collateral to his own damage…

According to Conway’s own admission, Jon Bernthal delivers the best portrayal of Frank Castle yet, imbuing him with a heavy-leaded, visceral grit succinctly interwoven within the layers of pathos and gravitas comprising the very fibers of his Kevlar-armoured consciousness. Providing nuanced counterbalance to Bernthal’s FrankenCastle is Ebon Moss-Bachrach, as David Lieberman (Micro), a former NSA analyst — and Edward Snowden archetype — who may be initiating an unholy alliance and partnership by contacting the Punisher to convince him that the mission will not succeed without his own techno-svengali mastery.

What further infuses this pairing with firepower is their inverse relationship; wherein Frank is fighting to avenge his lost and murdered family, while Micro has faked his own murder to ultimately protect and reconnect with his living family. Jaime Ray Newman expounds the humanity quotient amongst them, as Sarah Lieberman (Micro’s wife and mother of his children), by both personifying and symbolizing the love and life-giving presence who helps to nourish the very existence of both of these men.

Amber Rose-Revah stars as Dinah Madani, a war veteran and highly-trained Homeland Security agent who’s continuing investigation into the murder of her former Afghani police officer partner in Kandahar, Afghanistan; this sinks her deeper into a labyrinth of black ops corruption and romance that finds her within the deadly blast-radius of the Punisher’s Warzone. Paul Schulze does dastardly duty as the Big Bad in this series, by portraying William Rawlins (codenamed Agent Orange, by Castle) – a high-ranking CIA officer, who ran the Punisher’s clandestine assassination squad in Afghanistan. Playing the guns-for-hire guru who packs the muscle for Rawlins is Ben Barnes, as Billy Russo, Frank’s former best friend, who now owns and operates a private security firm called Anvil – that continues to expand it’s might by procuring FedGov contracts that often equate to corporatized murder. Russo meets his future fate at the hands of his old buddy Frank by series end, and this will undoubtedly arc into Season 2, when he returns as the Punisher’s old comic book nemesis, Jigsaw.

Despite the fact The Punisher forcibly captivates the viewer’s attention with high production value, luridly urban scenes and set pieces, action-packed choreographics, and emotionally-compelling performances by a truly talented cast, there’s a slight gun-barrel burst misfire: The series doesn’t really rake the muck regarding the deeper issues that are painfully obvious within its very own content, such as America’s endless and illegal globalized warfare; engagement in extrajudicial killing and murder; the systemic corruption within our economic and political systems; the continued explosion of public mass shootings; and the growing rise of suicide rates, PTSD, and traumatic brain injury amongst our returning military veterans. It seems we’re only really given cursory reflection into a shallow grave pool, with so much unexamined meat rotting below the soil here.

Granted, we are talking about a Marvel comic book series that’s been adapted to the digital screen by Netflix, but it may still be irresponsible to not to openly analyze and critique the underpinnings of the material they’re disseminating to the global public. Are they justified in body-bagging these imperative concerns within the confines of a propagandized product that ultimately supports obedience to imperialism — by implying that our underlying hierarchy is actually one of sound mind and principle — and that we only need to bullet-brain some of the corrupted elements from its hide to properly heal it?

Or is their take away possibly this: Frank Castle is an anti-villain in a world that no longer has any heroes to speak of, and he actually might be someone who can bring salvation by expunging, by neutralizing, by obliterating, all of the sociopaths who brandish themselves as saviours, when they’re actually really our slaviours? Isn’t the Punisher ultimately a reflection of the very monsters he once served? Doesn’t violence just beget violence beget violence into silence???