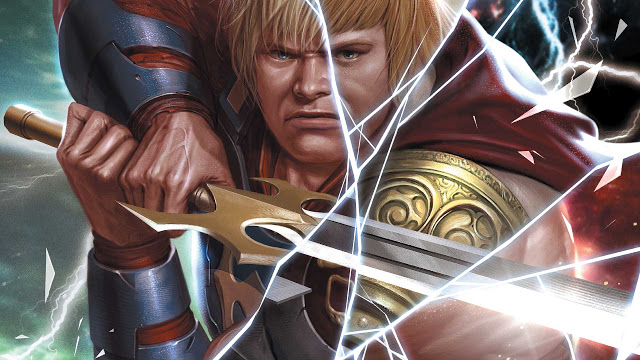 Happy Tuesday, geeks and geekettes. It’s Thanksgiving week, and that means we’ve got plenty of goodies and comics for which to be thankful! We’ve got some titles coming your way to let you know just what to do in between servings of stuffing and turkey. Let’s dive right in!

Denny O’Neil and Steve Ditko’s faceless hero, The Question, gets reinterpreted this time out in DC’s Black Label line. As the outspoken, yet trusted, face of the news media in Hub City, reporter Vic Sage moonlights as the faceless psuedo-antihero, exposing not only a corrupt politician’s connection to a long-defunct secret society, but also stumbling upon what may be his very own past lives (apt title, eh?)

Writer Jeff Lemire has proven more than capable of handling superhero tropes, as well as deconstructing those very tropes, and given the setup here, I anticipate that’s where the story is going. This feels like a long lost O’Neil/Denys Cowan Question yarn, and having Cowan back doing the art (and the masterful Bill Sienkiewicz inking) makes this a great return to form. Cowan hasn’t lost his touch, and this is a moody, dreamy, torrid and dreamy piece of work brewing. I love the initial Question line (still collecting, if anyone has any they might want to part with!), and this is definitely being added to my pull list.

There’s not too much in the way of reintroducing the Question to readers unfamiliar with him, though, and that might prove detrimental down the line, but if you enjoy a good, moody mystery, this might just be for you. 4/5 Bibles.

Remember that movie where Jet Li is traversing the multiverse to be the One? This is of similar ilk.

Enter He-Man of Hellskull absorbing the energy from Power Swords from his alternate versions. This story is a fun tale set to spark laughs and nostalgia, especially from Gildor, the key, and He-Lundren. What really has me locked in is Prince Keldor, a doppleganger of Skeletor, before the face deforming accident. If you’ve watched various social media videos of Skeletor insulting his crew and laughing videos, then Keldor as comical but Prince Adam-like prankster as the protagonist is perfect. Panthor is his Cringer, and Beastman is his Duncan. There’s even a Spider Ham-y version of He-Man which makes fun of the various action figure gimmicks.

Overall, Masters of the Multiverse #1 is a fun read and I’m not mad at all, and writer Tim Seeley has a great ear for the characters and world. It’s not at the top of my stack, but it has its place. The art, by Dan Fraga and Richard Friend, is comical but solid, especially the last splash page (no spoilers!) I’m digging this. 3.5/5 Bibles.