Introducing our new format for Fistful of Comics. No longer will you miss comics due to our clunky page system (yes, I’m talking to you, you skeezy little blog-skimmers!), and our reviews will now be separated into sections with the wonderful people who accompany them. If scrolling is too painful, then here are some jump links that will take you to your book(s) of interest.

The Wicked + The Divine is what graphic storytelling should be at all times.

The plot is simple: 12 gods are reborn as pop-culture idols every 90 years or so. They are around for about two years and, then, they die.

One panel that sticks out is the where the masked gunmen are seen firing their assault rifles into the room of assembled gods and reporters. The panel is small pushed to the right, but it shows that the attackers are Christians: a gold cross hangs from one of their necks. 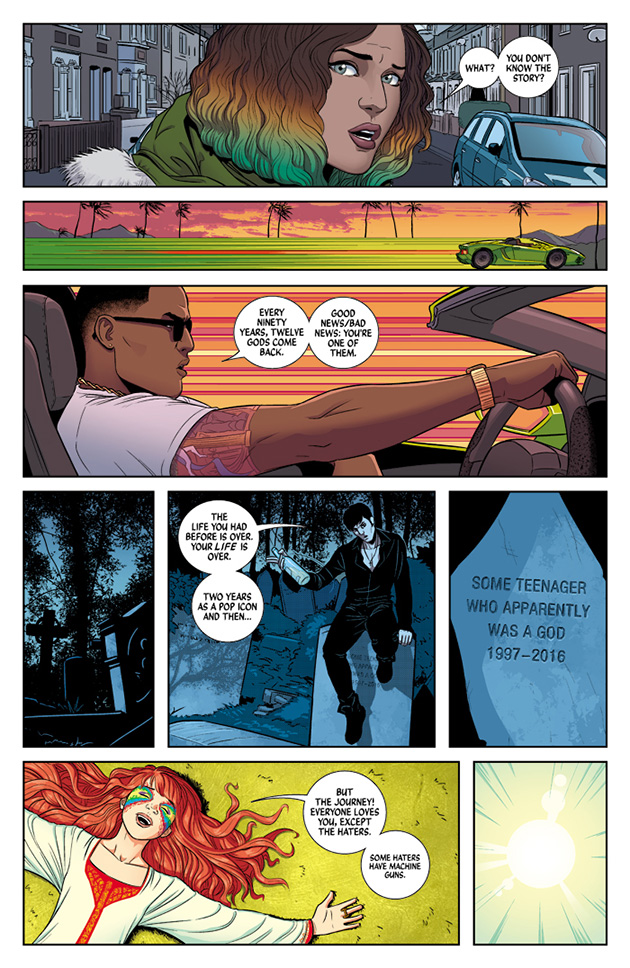 That panel tells you everything you need to know. The arrival of an eclectic mix of gods — Sumerian, Shinto and Egyptian — has not been accepted by everyone.

The interview before the attack helps to show that there is skepticism to gods claims, but the full weight is not felt until that attack. And that’s when words come into play.

“Why be so coy with the miracles, Cassandra?” Lucifer asks the reporter. “Maybe we didn’t want to scare the shit out of you.”

The Morning Star, a Sumerian god co-opted by Christians as Satan, takes a fusillade of bullets to her chest, snaps her fingers and makes the gunmen explode. Her words collect everything that happens to that point and it drives home that these are not pop idols, but actual gods with terrifying power.

That’s the weight. Here’s a light touch (and the line is attributed to Lucifer, too). When Laura, our human through which we can experience the story, recovers after passing-out at a concert performed by the Japanese sun-goddess Amaterasu, Lucifer is there to great her. The goddess interupts the star-struck Laura who’s trying to exclaim the woman’s identity.

“The Father of Lies, the Adversary, Lord of Flies, the Old Serpent, God of This World, Dragon, the Light Bringer, Apollyon, et cetera, et cetera,” Lucifier lists. “But you, Laura? You can call me Luci.”

The beginning of her list of epithets summons all the “Bow! Yield! Kneel!” from mythology’s greatest villain. It’s likely that the list of gods in the first issue are largely unknown to most readers, but Lucifer is the easiest to recognize. The reader knows that she is a villain. The reader knows that she is all of the dark titles she bears, but she just wants to be called Luci. How can you hate a Luci?

And that’s exactly what you need to feel as the Fallen is framed for a crime she did not commit.

Holy exposition Batman! With far too much backstory that most faithful readers will undoubtedly know, this entry seems to fall a bit short in the cannon nouveaux. From Peter J. Tomasi (Batman & Um Robin), Patrick Gleason (for which I’ve seen better with Green Lantern Corps) and Mick Gray (Al B. Mouse), Batman and Ra’s seems more like if the Hardy Boys were somehow explained to death by Ming the Merciless. Aside from the potential face crushing Mountain-to-Viper innuendo (GoT reference, bitches!), the graphical display of hand-to-hand combat did satisfy in the end… Until that Nazi from Apokolips showed up… Yeah… That happened. Wait for the next one. You won’t be missing much. 2/5 Batarangs.

Writers Claudio Sanchez (The Amory Wars, Coheed and Cambria band frontman) and Chondra Echert (Kill Audio) and illustrator Daniel Bayliss (Batman) continue to fuck readers’ minds in #3 of 6-part cathartic, psychoanalytic series that attempts to redefine what makes a hero and a villain. Inspired by the co-dependent relationship between Batman and Joker, the husband and wife writing duo birthed the protagonist Cornelius, either a seriously damaged Christopher Robin or a boy with onset schizophrenia. The mystery is who Cornelius will become: The Horseman, The Navigator, or both in some kind of twisted Fight Club scheme. The focus of #3 is the major turning point in Cornelius’s troubled past, much like the Red Hood emerging from chemical waste and young Bruce Wayne witnessing the murder of his parents. But, in these few pages, Sanchez and Echert made The Goddamn Wu not give a damn who Cornelius is or becomes by making one sympathize with the flaws and strengths of the three major characters. Both The Horseman and Navigator seem to be heroes, just with different styles and methods. Though, one does hope that Cornelius is just fantastically cray-cray and that the trio makes up one fucked up trinity. 4/5 Bibles.

I hated this comic. “What the fuck?” you might ask. Here’s why: The film Jerry Maguire is a late-90s sapfest (by bittersweet huckster Cameron Crowe) that starred Tom Cruise in the titular role as a sports agent in the throes of an existential crisis. Thomas Alsop is, for all intents and purposes, Hellblazer, starring in his own alternate-reality remake of This Is Spinal Tap. The point: When Jerry Maguire came out in 1996, its unapologetic portraiture of Cruise’s superschmoozer, all slick ‘do and wrap-around shades and Cheshire Cat grin, and then weathering a moralistic change-of-heart, seemed pretty fucking cool. Well, late the other night, my ﬁancee, Molly, and I were looking for something to watch and it happened to be streaming. By the midpoint of the movie, we had both decided that JM was a HUGE FUCKING DOUCHEBAG.

“I have too much life experience to like this character at all,” Molly said. That same principle applies to Thomas Alsop, and it’s a trap. See, T.A. is also a HUGE FUCKING DOUCHEBAG.

But the con of these characters is that they’re written in a way that manipulate us as readers (of a certain age) into rooting for them. It’s coercion, and more often than not, it’s not very well done. Don’t get me wrong; I ain’t ragging on the writing.  Rookie comic scribe Chris Miskiewicz‘ premise in Thomas Alsop: The Hand of the Island is a sound one: A Native American curse tracing back to the 1700s endows a bloodline of men with psychic connections to the island of Manhattan, forcing them to defend it from paranormal activities. That seems pretty cool. For any of us who are dudes that would have been coming-of-age as antiheroes began standing in for real heroes– who all popped collective male envy boners as bad guys started getting dealt good guy problems –there was a time when Thomas Alsop would’ve seemed pretty cool too. But now we’re older. Smarter. Stronger. Now is NOT that time. 1/5 Bibles.

As I sat down to read the Eye of Newt, this DyNast was quickly taken through a tour of every single fantasy story trope that’s ever existed. The young wizard apprentice, Newt, about to undergo a “great” journey, with magical items, dragons, talking animals– you name it. From the get-go, it’s obvious this comic aims for a much younger audience. But, unfortunately, this Fig Newt makes the mistake of talking down to its audience. The plot points are cliche, character development is non-existent, and there’s no sense of danger or adventure, for that point, anywhere in sight. But to its strength, the beautiful artwork from the comic’s writer — and legendary fable illustrator — Michael Hague, should be enough to keep you turning the page. But sadly, one would be better off reading the Old Testament for a much more rousing adventure. 2/5 Rings of Sauron.