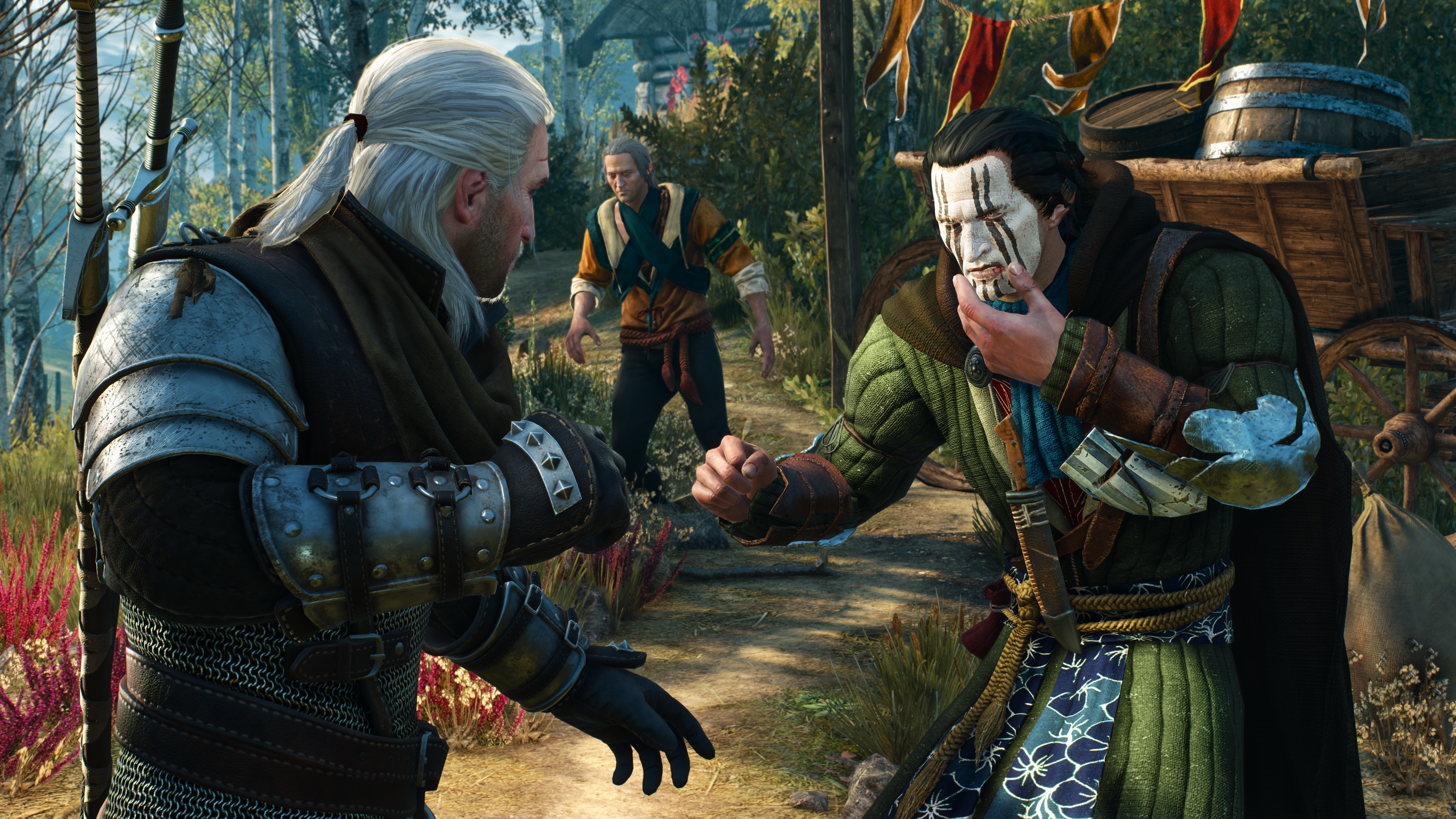 Only a game this massive deserves 5 separate reviews and a mega podcast, and GodHatesGeeks is the place to give it all to ya. In case you’re wondering…

NO– we didn’t take our time for a proper review of The Witcher 3. There’s no such thing. The game doesn’t end. At least to our knowledge. But in the collective 250-300 hours with the game, our team certainly found enough to analyze. Before we get to the ‘Cast, however, let’s give each one of our congregamers a brief moment to relay an aspect of the game that most impressed them.

NOT JUST A PRETTY FACE

Templar here, and I’ve been tasked with tellin’ y’all about the graphics and realism of The Witcher 3: Wild Hunt. If you’re followed my other reviews in the past — more or less half the video game reviews on GHG — then you know im a graphics connoisseur. Well, loyal congregants, there has never been a world like that of this masterpiece. If a video game were a piece of fine art, this game would be the motha freakin’ Mona Lisa. Everything is highly detailed and textured. Plants wave in the wind. Sunsets are blindingly spectacular. Shit, mind boggling. As far as realism, this is another perfection. You get drawn into this mystical world so fast you don’t even realize it. The story blends together like an orgasmic fruity coctail (or a Jack ‘n Coke if that’s your flava). The sheer massiveness of the world, climate changes, day/night cycle and overall sheer beauty of it all will have you in awe. Just watch the winds gust all of the neighboring foliage as you traverse through swamp-monster infested muck, or breeze with your 4-legged pony pal Roach through countless mountain crevices and heat-sweltering farm-fields. Hell, your Geralt will even have to periodically visit a barber for a shave if you’re tired of being “The White Wolf” (a.k.a. a beardo). I could go on for days about how this game’s authenticity will knock your socks off; but since writing takes too long — and we’ve got more Witcher to play — listen to the podcast for more info. You won’t regret it.

ON THE ROAD AGAIN…

The story of the Witcher continues in the third game of the series by CD Project Red, and what a large game it is. It is very easy to get lost in the game with how expansive it is. Not lost in the sense of direction, but lost in the gorgeous graphics, amazing wilderness, and the multitude of side quests–which are one intense and wonderful part of The Witcher 3. It’s like DLC, but without the lame extra cost. While many will choose to follow the main story, as all games are meant to be played, the additional places you can go and things you can do provide an extra experience; another layer to the game to keep you immersed in its world. The majority of games provide a central story and may hint at other things going on, but generally only in word and not in actual adventure. This gaming Saint enjoyed following the little stories and exploits that can be found throughout the world, and the game offers many ways to find them as well: Some can be found in towns on a bulletin board (you’d like find outside of a church– hail GHG!), some via random travels across the land; maybe even from the clue markers on the world map, and others by simply speaking to townsfolk. No matter how you find your missions, they are a welcome extension. I found myself going after these rather than going after the primary mission, as it gave a nice break and often provided good bits of loot. If you have the game or plan to play it, definitely make sure to scour the world and map for the extra adventures — and, of course, listen to my GHG debut — you won’t be disappointed.

I can’t argue Patrick’s assessment of the side missions one bit. You see, I’ve always been the type of gamer who smashes and grabs; goes in and out; and went one and DONE. “Fuck a side quest”, my too-busy-watching-NBA-on-TNT-Thursdays watching self thought. But, in this game, side missions are where it’s at. But why? In addition to the many fine points laid out just above, the deft characterization is definitely what helps make these side missions so interesting. Man, these people crack me up. They’re fucked! But what makes the side stuff so GREAT is the loot. I’m not exactly talking money either, as finding “crowns” — the gold currency in Witcher 3 — is far more scarce than, say, Elder Scrolls or Dragon Age. That notion of having less money becomes a great thing, as there’s a bit of sell-and-exchange strategy that other overly-generous RPG’s don’t offer. But not to fret, looters. If you love looting (hello, Borderlands!), there’s plenty to be made during the Witcher Contacts, which are the parts of the game that make this a “Wild Hunt”. There are countless items to thief, too. I often complain when a game like Destiny comes around and there’s one damn treasure chest in the whole entire area of map. Here, there are 6 treasure chests sitting on top of one another, in EVERY room, in EVERY building, in EVERY town. You can’t step 3 feet without clicking that A button (or X on the PS4) for something. Just don’t go expecting to sell all those lousy bludgeon bats you picked up from a few drunken pirates you unmercifully savaged to the local herbalist in one setting; merchants have a limited bank, much like their cheap asses do in person. With Witcher 3, it’s all in the details– and a pretty damn good wrap-up show…

For a game that’s the third installment in a franchise based off of a series of multiple books, it would seem like the stories in The Witcher 3: Wild Hunt would only be discernible to anyone who started to take in this Tolkien-sized anthology of narrative from the beginning. While we’d highly recommend reading up on the basics Andrej Sapkowski’s world — most notably what the Conjunction of Spheres is — the game does a great job of sucking you in, regardless of what you already know of Geralt of Rivia. Not just because they do a great job of doling out exposition in very consumable chunks, but because Geralt’s quest for Yennifer and Ciri isn’t the story you’ll end up caring about. No, the best story will be the story you create for yourself based on how you interact with the world around you. All the familiar game mechanics that have defined multiple-ending RPG’s are noticeably absent in Wild Hunt. Dialogue trees are never obvious in representing certain moral decisions, there is no good/evil status bar, and you don’t get certain powers just because you’ve become a monster-hunting Sith Lord. Most of the time you won’t even realize that your action was actually a world changing decision until literally tens of hours later when you see a character again and they call you out as a murderer, forcing you to fight a group of soldiers you thought you were conning so subtly (obviously, I’m being purposefully vague – in this game even the most innocuous seeming side quests can have big spoilers).

Another great decision the developers made were to have consequences for decisions made in side quests show up in the main quest and vice versa. Certain aspects of main quests frequently branch off into side quests, and depending on how far you advance in either direction quests will fail because key characters were killed, or certain world changing events happened. It’s not just plot points being affected in the story that you’re in control of, you also have a big hand in shaping how the world of the Northern Kingdoms thrives around you. Never in my gaming history have I ever felt the kind of regret I had during a specific mission that, yes, I will elaborate on in the podcast. But I will tease you geeks with this: The fallout wasn’t just a cue up of some sad music over shots of characters crying; it made the town that was affected less lively. Characters that could have lead to further quests were permanently affected, and — now every time I run through that side of town – I’m always reminded that any one moment can be a defining one.

The Witcher 3: Wild Hunt‘s stars are the litany of creatures that Geralt of Rivia must do battle against as monster-hunting is his craft. These range from the banal and typical pack of wolves to the hybrid monsters that go bump in the night. One such hybrid is the cockatrice, which looks a lot like this in Old French mythology. In the Witcher 3, it is a large, screeching monster with a spiked tail that has no patience for the fool-hearty. Additionally, some of the monsters have gut-wrenching narratives behind them, which also adds to the player’s own story. And if you guys want to know my overall impressions of the game, past the initial monster design, then get your ass to mars and the podcast.