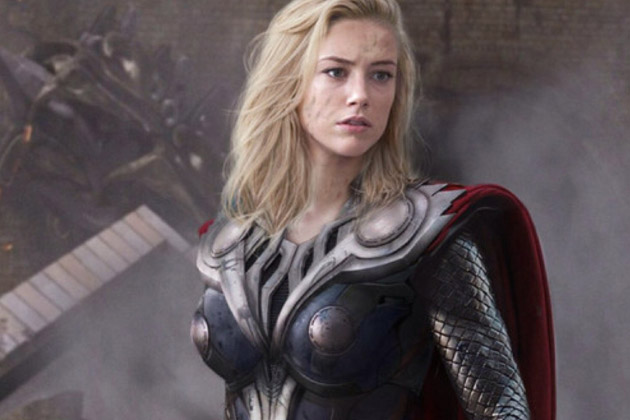 Now that it’s the end of…Futures End, we’re back to normal. And if you mean by normal that we’re reviewing battles between historical egos, a comic Goddess of Thunder, Guardians of.. 3000 galaxies, and a haunted school full of bratty children who want to be like Batman… then, yeah, things are bound to NEVER get back to normal.

It’s the Fistful of Comics, y’all!

Throughout Jason Aaron‘s run on Thor: God of Thunder, the esteemed Marvel writer has been blessed with some top-tier artists. To the Scalped scribe’s credit, however, Aaron adjusted his writing style to set the stage for the likes of Esad Ribic (“The God Butcher”), Bob Guice (“Godbomb”), etc. This All-New Thor now sees the likes of Russell Dauterman (Nightwing, Cyclops), whose classic stylings may IN FACT be the perfect art for the realm of Asgard and beyond.

But, let’s get serious here; you’re reading this because you want to know about the female Thor!

Unfortunately, I don’t have any answers for you just yet. The goldilocked warrior woman appears on the cover, and, not surprisingly, on the last page. But, as usual with Marvel, it’s all about the Journey Into Mystery, since most reveals with the powerhouse comic publisher are hinted months in advance. And– you don’t judge Marvel for surprises anymore; you judge them for execution.

Dauterman, to his credit, is this issue’s excellence of execution. His nifty linework captures the frustration of the All-Father and the Odinson — when that frackin’ Mjolnir just won’t budge — in a pair of ways, both comical and exhaustingly unworthy. Despite how dire the situation is, Aaron never stops writing funny (Odin, Freya and those magpies are just too much), and Matthew Wilson uses just enough pretty pastels to compliment Dauterman’s over-the-top storybook fantasy. Just check the opening pages of a Norwegian Sea plagued with Frost Giants, for example.

After one issue, Dauterman appears to be the right man for the right job. But is the new Thor the right woman? Stay tuned.

The book follows Olive Silverlock, a second year student at Gotham Academy, who is assigned to basically mentor the sister of her soon-to-be-ex boyfriend. First issue in and one can already feel how great of a foil these two characters will play off one another. Secret passageways, brooding characters, humor, and all layered in with Mythos from Batman’s 75-year history makes this a must.

Becky Cloonan (Batman, Conan the Barbarian) and Brenden Fletcher (Batgirl, Assassin’s Creed) deserve top marks for this issue. Karl Kerschl (The Abominable Charles Christopher) absolutely murdered this book. His artwork for this issue can only be described as masterful, bringing the characters and the school itself to life. Bottom line, you should be reading this. 5/5 Moody Hates Perfect Scores.

With the great Sherlock BBC TV show — and the not-so-bad Elementary — and movies starring Robert Downey Jr. it’s tough to have an otherwise legit Sherlock Holmes; but Anthony Del Col and Conor McCreery (both of Kill Shakespeare fame) do a great job bringing Holmes to life in the comic book medium– and pairing him up with Houdini almost seems like a no brainer. Both characters proved in this Dynamite Comic to be nearly identical in terms of their manical-sized egos, and one can only ponder whether their minds together can put an end to their supernatural foes. Carlos (Ryu, Sherlock Holmes: Moriarty Lives) Furuzono’s layouts were superb, enough for an ending that only left this Cardinal wanting more. If only Houdini could MAGICALLY deliver issue #2 right now… 4.5/5 Inescapable Escapable Traps.

Like all great things, the end happens way before you want it to.

As the final issue in the Rick Remender (Uncanny X-Force) and Daniel Acuna (Black Widow) led Avengers Unity Squad/Uncanny Avengers comes to a close we are left with a brilliant final prelude to AXIS but a less-than-appropriate final issue to a run. As the final “March to AXIS”, UA sets things up nicely for the evil Red Onslaught’s creation and shows a great father/daughter dynamic between Magneto and Scarlett Witch that has been missing in comics. Remender has the ability to truly understand Magneto, better than most writers over the last 5-years, his thirst for swift justice no matter the cruelty is one of Magnetos biggest flaws and greatest character traits.

We’re also shown a glimpse of the scars still left on the Scarlett Witch by her fathers power, the mix of adoration and fear helps to understand the pain she suffers from. Another final treat to UA is the return of Acuna’s pencils, his final battle between the Red Skull and Magneto is something of nerd fantasies! While this final issue in the M2A stands as one of the best, the realist in me still went looking up at just how much of a landmark run this was. 4.25/5 Red Skulls Agree.

Moving onto the more recent success of Marvel’s Guardians of the Galaxy domination at the box office, most wouldn’t be surprised with the publisher wanting to captilize on this fame and rush to market with a glut of GotG comics. With some being better than other — such as Rocket Raccoon — Guardians 3000 is not that. Coming from the creative mind of Dan Abnett, one half of the Peter Quill writing team, 3000 garners more issues than a Lindsey Lohan bad week. The plot is weak, using the tried-and-way-to-many-times-used “We all die, so let’s figure out how to stop it” featuring characters that lost our interest after the 100th time the timeline has been reworked.

Gerardo Sandoval (Wolverine) and Edgar Delgado‘s artwork truly never hits its mark either, let alone panel and character work that stays the same from panel to panel. The original Guardians never saw commercial success, and if this first issue is any judge neither will 3000. 2/5 Future Nerds Agree.

Ever wonder where all your favorite fiction stories came from? According to Paul Jenkins (Fairy Quest), every fiction story you have read — or ever will read — are based on the real life characters from the magical faraway land of “Fablewood,” “[the] home to all the stories ever told” of different genres from jokes to horror divided in different realms.

In Fiction Squad #1, we follow Frankie Mack, a failed Realm of Crime detective who transfers over to the Realm of Children’s Stories Golden Streets of Rimes to work, only discover that “every nursery rhyme is really a crime scene.” As readers, we follow this gumshoe’s serious internal monologues and no nonsense interaction with the playful and, in this world, damaged beloved nursery rhyme characters like Humpty Dumpty. In so doing, the juxtaposition between the two styles and the ease in which Jenkins connects the two genres are true testaments of good craftsmanship.

With all the references to old nursery rhymes and the introduction of previously unknown characteristics of these the timeless characters, Jenkins makes readers want to go back and pick up a Mother Goose book just to brush up. The illustrations of Ramon Bachs (Infinity: Heist) are expressive and playful. Bachs really makes Rimes come alive as he details ever building and character, even background characters, to our old nursery rhymes—a veritable who’s who. Can you pick them all out? And for those who see the cover and assume this is a pale imitation of Alan Moore’s masterful League of Extraordinary Gentlemen, I can assure that that nothing is further from the truth. The seeming thematic similarities are only surface deep, and “Fiction Squad” is a vibrant original work, not derivative in the slightest.

This fun, literary, and riveting new series of BOOM! Is worth following as the idea, story, and talent are all there to give you a fun new twist on your childhood past. 3.5/5 Eggs Over Easy.