Another week, another set of comics to review here at GodHatesGeeks! Sure, the holiday season is almost over, as is the year (and the decade!), but that doesn’t mean you can’t still treat yourself to some of the latest comic titles, does it?! And where else are you going to get the best coverage and reviews, other than right here?! So let’s dive in, before the ball drops and the door closes on 2019!

In the far year of 2099, Venom, “a new medical trial”, is provided to a young girl, Alea, with the hope of reintegrating into society. The trial works, she’s healed, and she lives happily ever after. Until the symbiote starts acting on its own, seemingly the next day. Next it takes over one of Alea’s arms pushing her to return to Alchemax. Apparently, the symbiote isn’t truly whole and senses its divided parts still held there. Alea reluctantly agrees to help so she can separate from it. They break in, reunite with the rest of the symbiote, force the doctor in charge of her trial to erase all information on the symbiote from Alchemax, kill the doctor and then escape. Not long after, the symbiote is triggered and reveals the symbiote God is here on Earth.

If it feels like I just threw info at you with little detail or context, well, that’s honestly what it felt like reading this. Starting with the beginning, if this is the first appearance of our lead, Alea, there wasn’t much of a backstory to get attached, which is a detriment for writer Jody Houser. How can we care about a main character we know so little about? When we are introduced to her she had already been selected for Alchemax’s supposed healing trial. She has what appears to be burns on a large percentage of her body, but there is no detail on whether the damage extends beyond cosmetic; she seems mobile and isn’t in any pain. After her healing, there isn’t a clear passage of time for the following events. Alea also isn’t too conflicted by the end of the issue. she returned to Alchemax to get rid of the symbiote. Once the symbiote is whole, there was nothing on why it hadn’t detached itself from her.

Everything about this issue was rushed to get to the set up for the next issue which felt unearned, and while the art, by Geraldo Borges, was good, it wasn’t “must have” material. Although we are introduced to a new protagonist, the story and premise may hay have promise for a new perspective in this world, but it was too rushed for me to feel invested or find myself looking forward to the next issue. 2/5 Bibles.

Are y’all Ready for the Revenge of the Cosmic Ghost Rider?! Tell you the truth, as crazy a concept as it is I love the whole concept of Frank Castle being a Cosmic powered Ghost Rider.

This all new miniseries from Dennis Hallum (MARVEL’S SPIDERMAN: CITY AT WAR) and Scott Hepburn (DEADPOOL) is full of action as we travel with Cosmic Castle wreaking havoc throughout the Shiar Galaxy. Until Gladiator arrest him and lick him away in Shiar space prison. It’s not long until one of the inmates angers the Cosmic Ghost of Vengeance, which turns the space prison into a Horror movie! Plus Added Bonus Frank Castle vs Cosmic Castle! 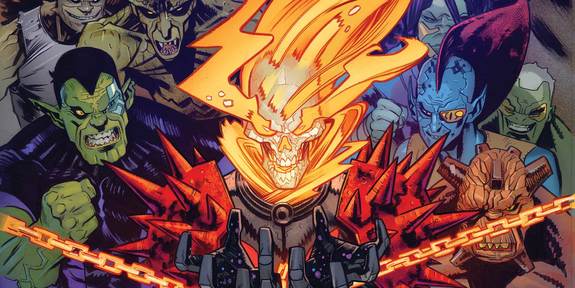 Once again, I don’t quite know how it’s done so compellingly, but Geoff Johns and Gary Frank have concluded the meta-narrative in as satisfying (if slightly unexpected) way as one could hope for. Leading up to the final confrontation between an emotionally detached Dr. Manhattan, and a besieged Superman had hinted at one of two possible outcomes: the destruction of the entire DC Universe, or the death of Dr. Manhattan. Using Superman as an anchor (not just for narrative purposes, but, indeed, for greater metatextual purposes as well), Dr. Manhattan has embedded himself into the DC Universe, affecting the past decade or so of events, and even hints at a major crossover some ten years or so into the future (the mention of Thor, and a “massive green behemoth” are major indicators as to which universe will be crossing over a decade down the line). While not necessarily the slam-bang finish that was perhaps anticipated, Doomsday Clock reinterprets not only the cynicism of Watchmen as a whole, and the nihilism of Dr. Manhattan specifically, but of the effect that the aforementioned graphic novel had on the industry as a whole. 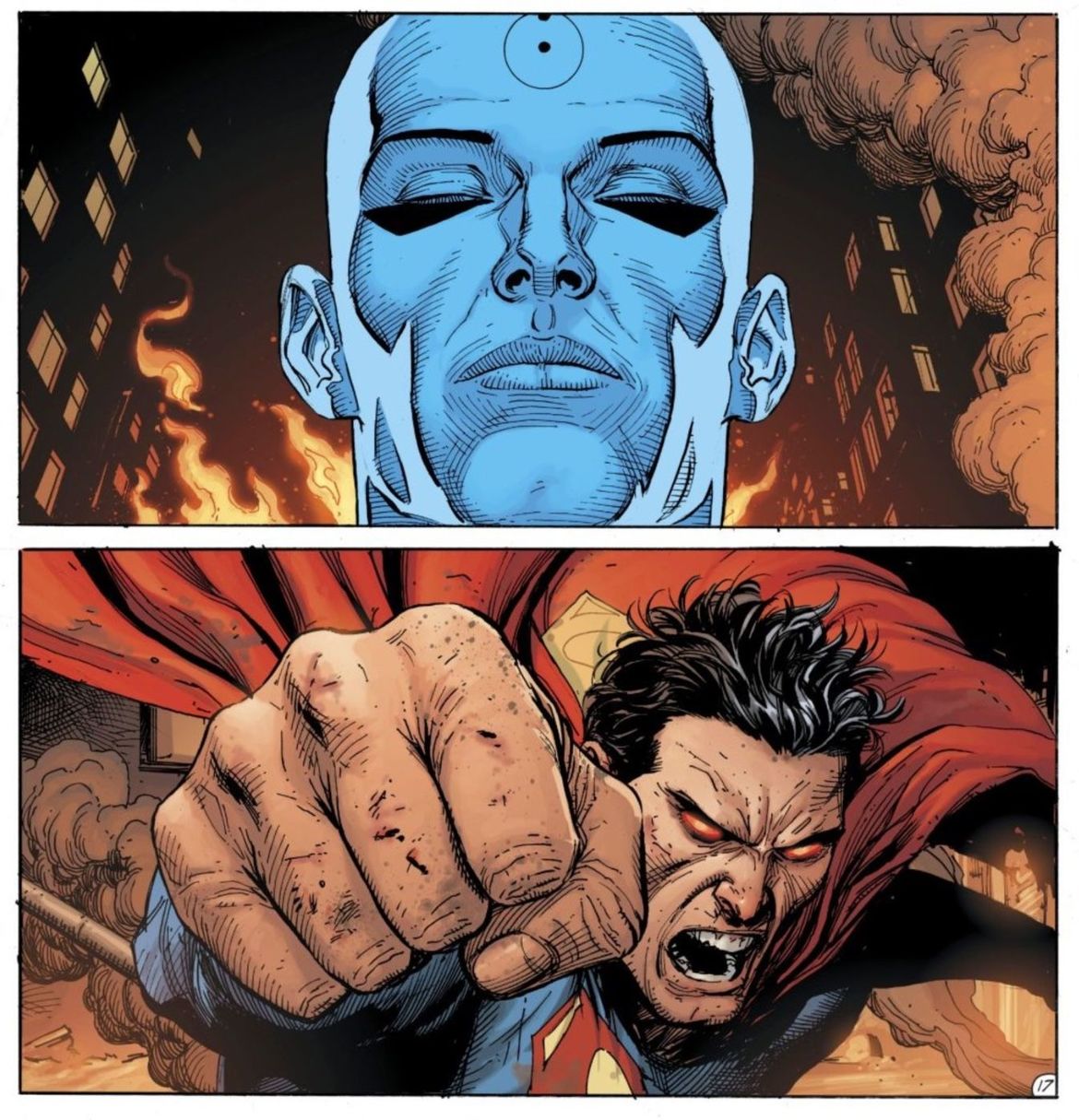 While both retconning — and cementing — every iteration of the DC Universe (here referred to as the Metaverse), Doomsday Clock explores not only the continued cycles of birth and rebirth with each Crisis event, but also how straying from the hope and optimism of the DC Universe proper (here symbolized by Superman, almost as a totem) has affected each character in turn, and the reception of each interpretation by readers as a whole. References to Rebirth, the New 52, the initial Crisis on Infinite Earths, the Dark Multiverse, and events yet to come (it helps to have an antagonist with the ability to see all points of time simultaneously to usher in a new era), Doomsday Clock continuously reinforces the notion of Superman being a force for good and inspiration, and how, perhaps in a post-Watchmen world, that might seem old-hat, but is no less necessary than it was in the 1930s and 1940s.

Optimism is a hard thing to hold onto, especially during times that seem insurmountably bleak and terrifying. But where there’s hope, even something as sickly sweet and almost pathologically optimistic as Superman, there’s at least some sliver of will to keep going forward. For those looking for a throw-down between the two most-absurdly-powerful characters in the DC Universe (if not all of comics), you are going to be disappointed. This doesn’t end with a knock-down, no-holds-barred throwdown, but with one symbol of hopeful humanism rising to inspire a detached, omnipotent, nihilistic cynic to make right the damage he’d wrought.

Having used the Watchmen universe in the HBO series to reinterpret American history while simultaneously deconstructing the original text (itself a deconstruction), it was refreshing to see that same universe reinterpreted within the medium in which it first appeared. Alan Moore is nothing if not someone subverting and reinterpreting literary characters (often in grotesque, surprising ways. Just read his versions of Bulldog Drummond, and James Bond in the League of Extraordinary Gentlemen), and while the circumstances of these simultaneous sequels coming together are extremely controversial, the end results speak for themselves.

TLDR? Buy this series. Buy the whole thing. And read it about three or four times. It doesn’t get much more exciting than this. (Hell, I barely even TOUCHED the plot, and can keep going on!). 5/5 Bibles.