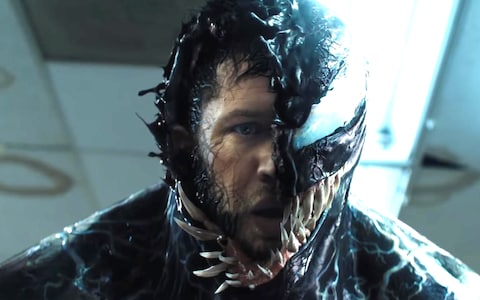 Yeah, I saw it. Venom is, like, 15 years too late. It’s too inconsistent and cheesy. Plus, this movie has no connection whatsoever to Spider-Man, which is the sole purpose of Venom: the anti-Spider-Man. Tom Hardy was better than the Topher Grace/Spider-Man 3 version of Venom– but that’s not saying much. Don’t waste your money. This movie DOES NOT get the Belser Seal of Approval. 2/5 Antidote Bibles.

P.S. I don’t ever remember seeing Moody in this movie either. 👎👎

Almost like a messy, but decently tasty stew, Venom, directed by Ruben Fleischer, is undoubtedly a discombobulated and lackluster superhero film, yet, it’s not as catastrophic as Venom’s destructive personality. The narrative follows a journalist whose investigating a shady foundation that’s performing questionable experiments — where he then discovers a dangerous and wickedly twisted alien that merges with his body. The sanitized and blunt plot is an absolute mess. From the aggressively blockheaded script, to the laughable and weak dialogue, the film collapses on itself with its tedious, ham-fisted, and charmless first act that struggles to find a proper footing…

As a matter of fact, the tone of the entire film is in a state of disorder. The mishandled comedy and grotesque violence that screams for an R rating creates a topsy turvy film that quite doesn’t know what it wants itself to be. Almost like a high schooler going through a mid-life crisis, or a girl trying to decide what to drink at Starbucks, Venom is lost and constantly changing. The action was efficient, but extremely generic in presentation. The CGI effects really do help elevate not only the action sequences, but whenever Hardy is — literally– fighting his inner-demon. Some of the scenes when his limbs morphed into a symbiote ooze were well executed and pleasing to watch. The lack of gore didn’t bring the film down noticeably, but an “R” certainly wouldn’thave hurt. There’s some odd editing done throughout the film and quick cuts that makes me wonder whether or not that cut exists.

Hardy surely attempts to pull off a decent performance, but comes off as fidgety, muted, and curiously unengaging. His bond with the symbiote does lend itself to a few comedic scenes that involves Hardy doing some entertainingly wacky, physical performances. The rest of the acting is atrocious, to say the least. There’s little to no chemistry between Hardy and Michelle Williams. And Ahmed plays a “by the books” billionaire antagonist that’s only there to challenge Venom, and lack any sort of real motives.

Venom is neither a triumph or a trainwreck. It’s just.. there. It’s a mediocre superhero film that’s cashing in on the name of the iconic super villain. Even with an star-powered cast and violently awesome potential, the squandering origin story might have a few fun elements due to Hardy’s lead and neat CGI effects, but fails to bond with its host and ultimately dies on arrival. 2/5 Symbiotic Bibles.