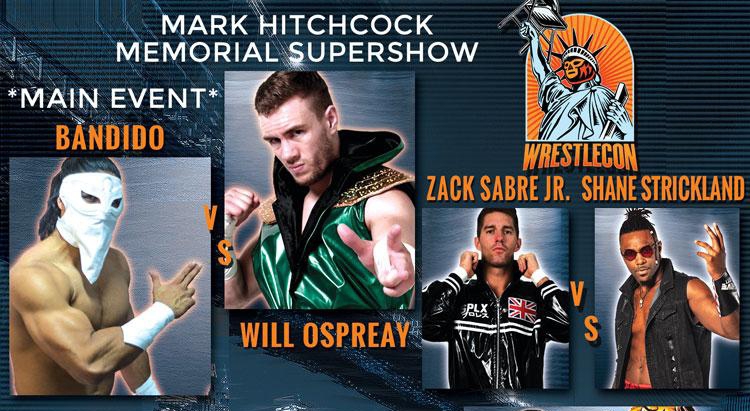 OK! Ringside Apostle Numero Uno is here to report live at WrestleCon, for their annual Mark Hitchcock Memorial SuperShow. Before a wonderful video package and presentation to Mark, a High Spots Network employee and supreme wrestling fan who not too long ago died in a tragic hiking accident, fans were greeted by Road Warrior Animal and the NATURE BOY! Ric Flair. You’d think we were off to a blazing start. 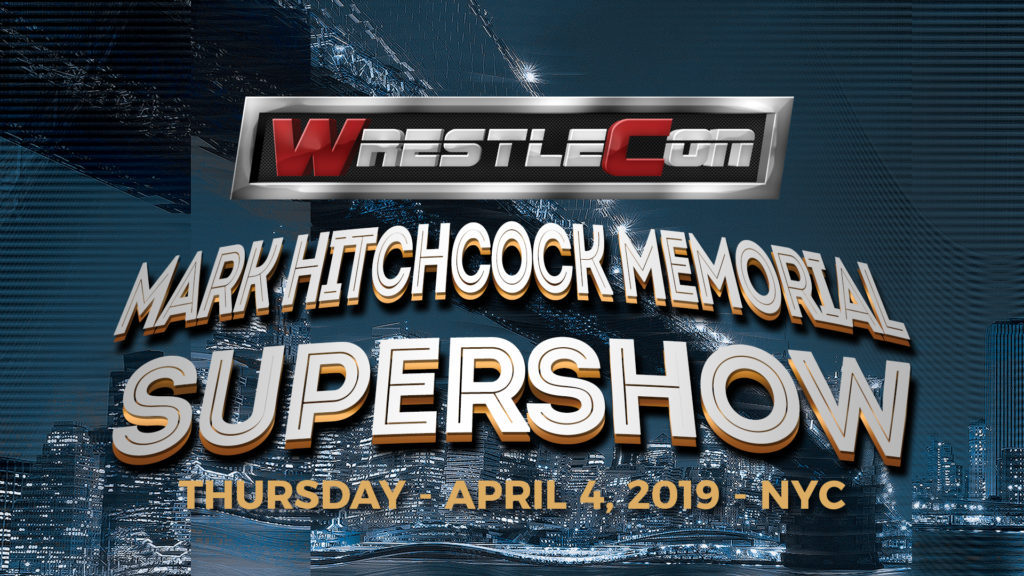 Fans who spent up to $130 for a nice balcony seat peaking over the ring were led to believe their seats were set in the deep far end of the New York Hilton Midtown’s upper section. Meanwhile, folks with $60 seats had perfect dead center views, until one man. One man! Whoooooo!! Spoke up to the one poor employee upstairs just trying to “do his job”. A wrestler, a volunteer. There was no management in sight. So none of the seats (at least in balcony) were labeled, other than some cheap, impossible-to-read white tape that listed rows in sections that made no fuckin’ sense; meanwhile fans were forced to figure out which of the seats not labeled 1-28 blah blah yadda yadda were there’s. Such bullshit.

That said, if you don’t speak up you don’t get what you paid for, and thankfully my Boston compatriot and wound up with the nice seats we paid for. It still urked us that many fans got screwed due to poor management and many others scored seats that weren’t there own at half the price. Hopefully the rest of the weekend’s WrestleCon shows go smoother…

Let’s get to the action.

–Masato Tanaka vs. Eddie Kingston – This was a solid opener that clearly wasn’t supposed to be the opening match due to some announced delays. Tanaka did a cool, modified sunset flip stunner and I enjoyed his sliding forearm smash finisher. This might be nuts since I hate “death” matches, but these two would have been better suited for one. – 2.5/5

-Pentagon Jr. vs. Fenix – Who would be the Lucha Bros mystery opponents tonight? Why, themselves! And I was completely OK with that. They went on to have a very good, at times spectacular match with an abrupt finish. Anticlimactic finishes seemed to be the story of the night until the main event. Fenix did everything (with the Luke Skywalker PK and sky high double springboard moonsault being my favs) while Penta was the more viciously stiff of the two. – 3.5/5 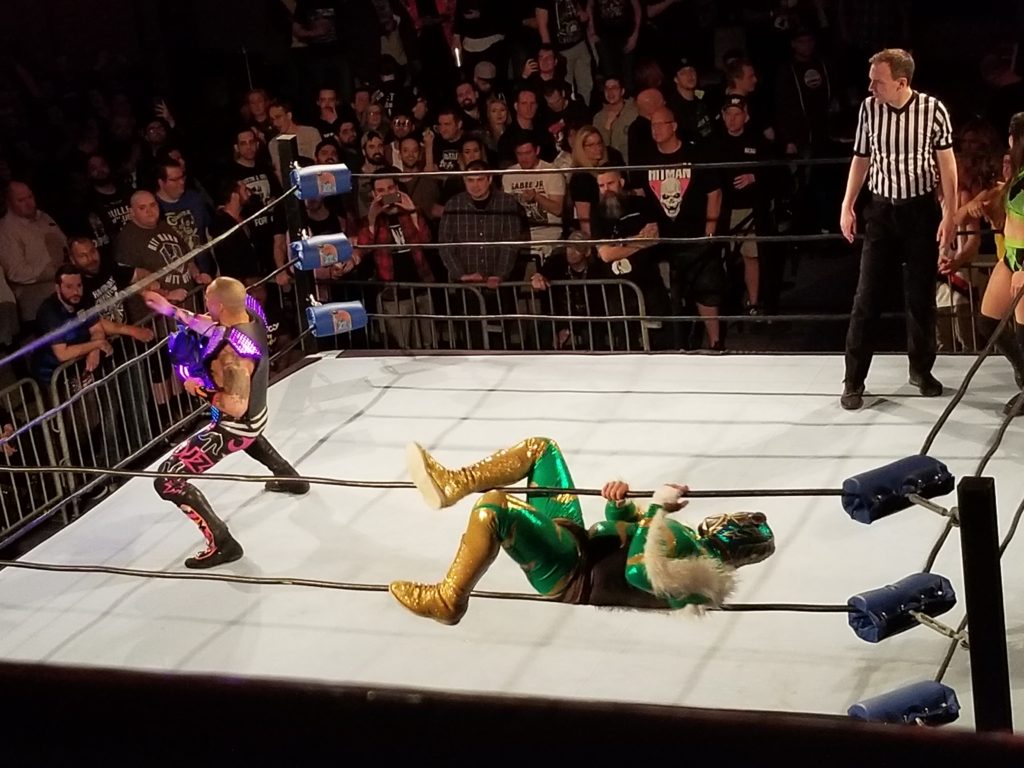 –Tajiri, Puma King, DJZ, & Samantha Heights vs. Sammy Guevara, Diamante, & LAX – The first half of the match was pretty poor, slow to get going with too much “insider” comedy and stalling. About halfway through, LAX included Diamante in a few cool triple team spots and Sammy started his flyin’. While not terribly over tonight, Guevara looked crisp. Tajiri was the biggest star of the match and got a very cool mid-air mist spot Ortiz, before the buzzsaw kick to 3. The second half of the contest was far more thrilling, with twin female dives to the outside, and LAX doing all the match’s “heavy lifting” with superior double and triple-team combos. – 2.5/5 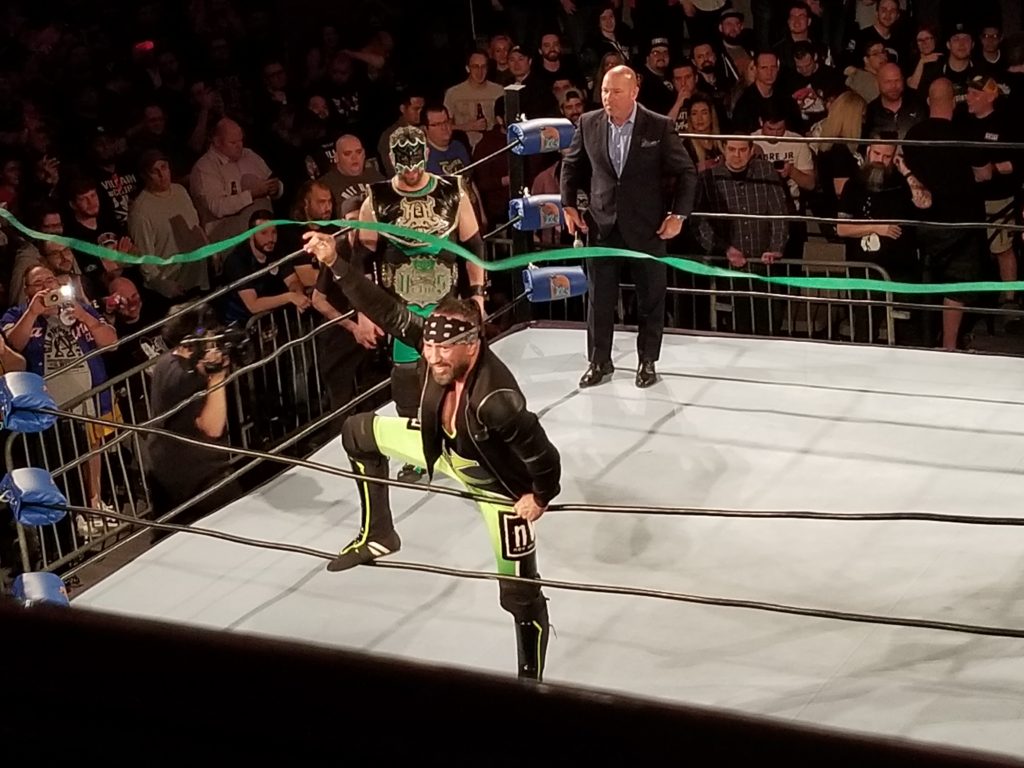 –Robbie Eagles vs. Arez vs. Flamita – Your usual lucha-style 3-way spotfest where the guys were more concerned calculating spots instead of having it look like a match. With lots of dangerous lunatic dives and more, Eagles was the most over and got the eventual 450 for the win. – 2.75/5

–Jushin Liger, Sean “X-Pac” Waltman, & Hurricane Helms vs. Caleb Konley, Jake Manning, & Zane Riley – This was all about getting the legends over as the biggest babyfaces in the arena against three guys who were probably carrying their bags and breaking down the ring at the end of the weekend. X-Pac, in particular, looked awesome. It makes me wonder if this match should have just been a singles between him and Liger. Either way, the lesser-knowns got heat on the legends and everyone got their shit in. A fun piece of nostalgia. – 2.25/5 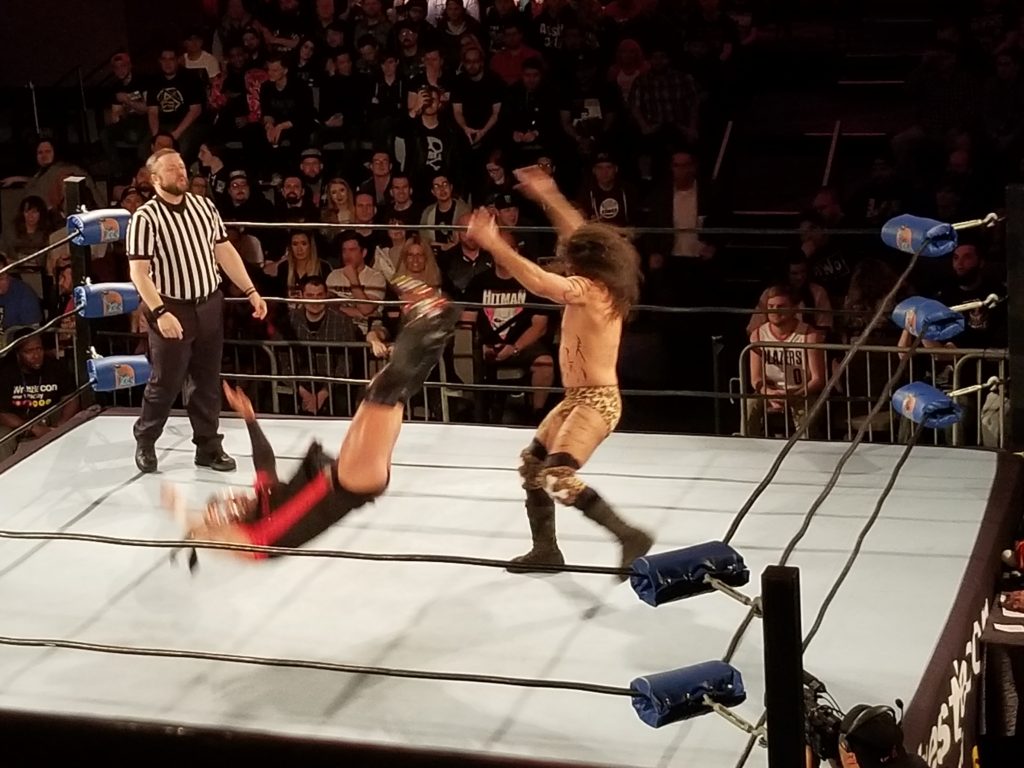 –Dragon Lee vs. Cavernario – The match that changed everything. After a subpar first half to WrestleCon, the two CMLL workhorses came out swinging. One of the coolest spots saw Cavernario nail Dragon Lee into a DDT Destroyer that Lee no-sold into an absolute devastating Canadian Destroyer before both went tumbling down to the mat, Ishii style. They both worked super hard and hit a series of vicious topes, before a double corner footstomp from Lee and lots of unique suplexes and slams from Cav. Other than the abrupt Falcon bomb finish from Lee, this was great! – 3.75/5 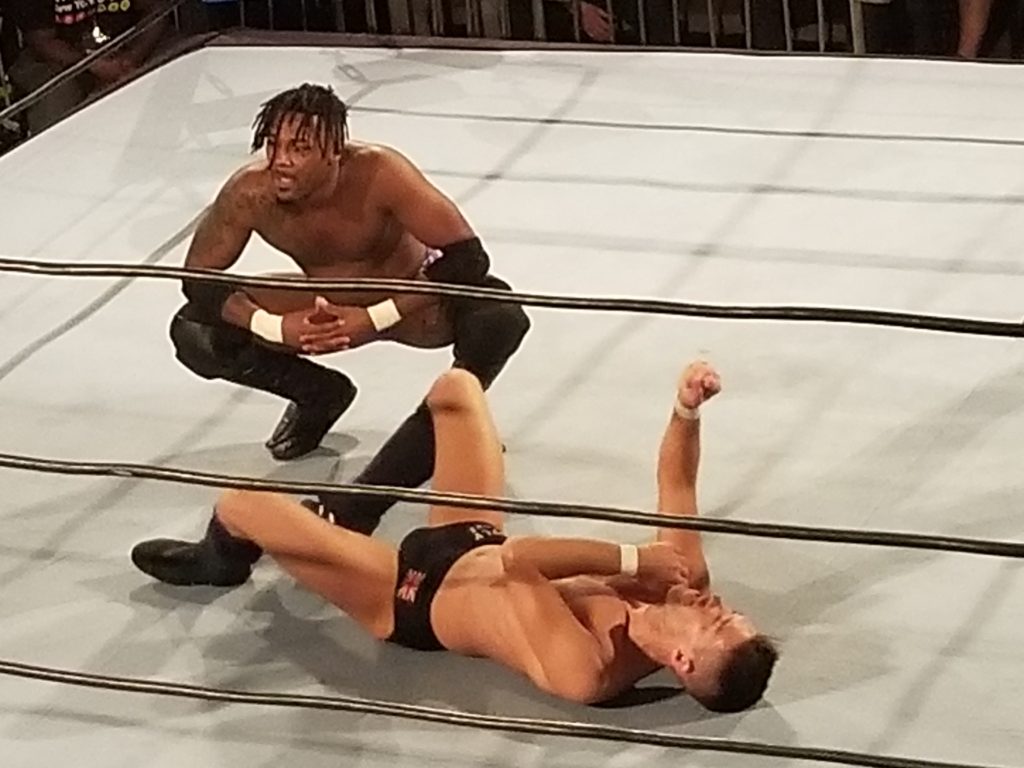 –Zack Sabre Jr. vs. Shane Strickland – This was an awesome test of mat-based endurance with the technical wizard in ZSJ going against a guy who can take it and give it back. Strick showed tons of ground skill against Riddle last year in their great EVOLVE rivalry. While this was the wrong match for this fly-in crowd looking for high-spots and surprises, I loved it. The crowd did have many dueling chants going on, but the support just never got to the next level. One spot saw Strickland barely hit an ace crusher with one arm while selling an in-match injury with the other. Many may have seen it as a botch. The next time Shane went for the same move, Zack reversed into a flying armbar! I’m willing to bet this match was far superior to watch alone on your laptop. – 3.5-3.75/5 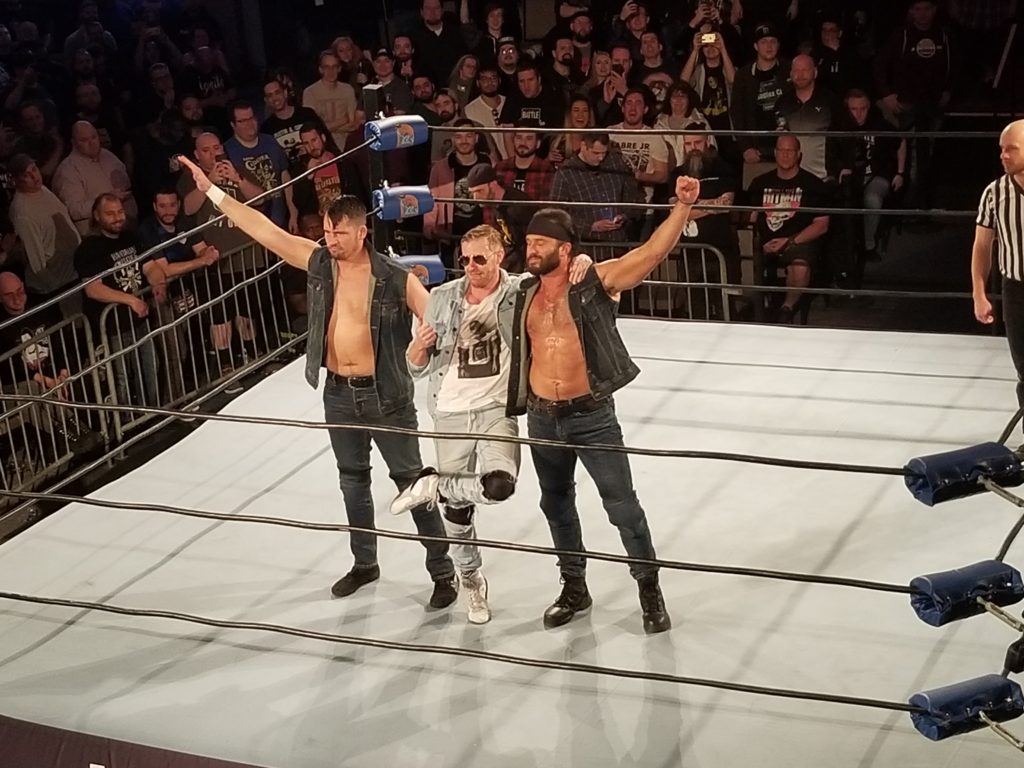 –Christopher Daniels, Frankie Kazarian, & Scorpio Sky vs. Orange Cassidy, Trent Barreta, & Chuck Taylor – If you’ve never seen Ryan Gosling wrestle before, you need to. Ha–Orange Cassidy is a treat. I think NYC was happy to see SCU initially but didn’t buy their promos leading to the match. This was a tough hipster/smark crowd looking for workrate. While Daniels did all comedy with Cassidy — and highly effective, as I couldn’t help but chuckle throughout — Kaz & Sky were innovative and energetic. This was also Best Friends at their best, mixing lots of comedy with their usual fun team dynamic. Every so often a comedy match can surprise you. Orange Cassidy, hands in pockets, not giving a FUCK, was the most over guy of the entire night and proved that comedy can be a wrestling commodity. He shouldn’t have been pinned. – 3/5 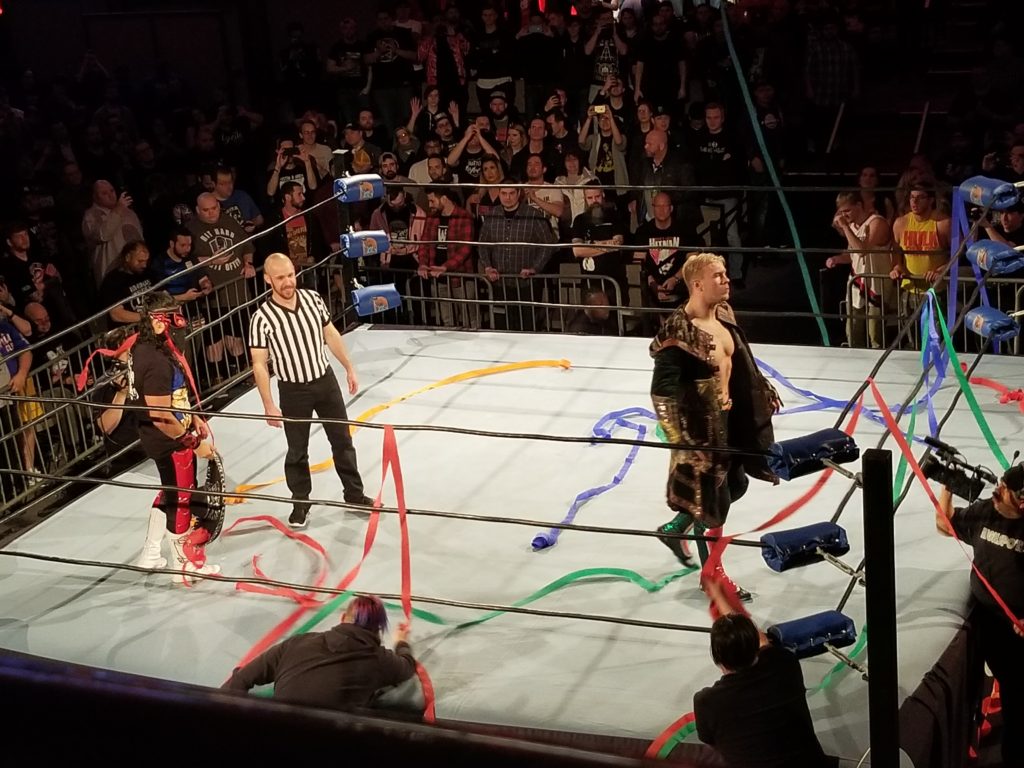 -Bandido vs. Will Ospreay – So… good luck. Good luck to everyone today, tomorrow and the rest of Mania weekend. Despite abrupt finishes all night, both Bandido and Ospreay — two of the most gifted and electrifying athletes in the business today — had all the time they needed to produce a superior match. Mission accomplished. Os continues his relentless great Mania Weekend match streak, while ‘Dido further expands his starpower. He began that journey with Will with an early squatting suplex, a wicked impressive show of strength from the smaller luchador. Ospreay fought back and never held back. Both guys went strongstyle and everything was flush: alley-oop bombs, alley-oop falcons vs. floating handspring spinkicks, springboard frog splashes. There was so much stuff, yet behind so much purpose. The climax was especially killer, as Bandido crushed Ospreay on his domepiece with a top rope reverse rana, followed by his signature torture rack GTS! He even attempted his nfamous top rope fallaway slam to Ospreay who reversed the finisher into a slick cheeky nandos. Everything in this match was so crisp, zero botches. The King of Mania Weekend prevails with a Robinson Special, Rainmaker, Oscutter and Stormbreaker. This would have been a classic in front of an All In or TakeOver audience. – 4.5/5

This was a good wrestling show with a little bit of everything for every wrestling fan and an absolute gem of a main event. I can’t help but think the “where is my fuckin’ seat?” fiasco tempered the crowd reaction a bit, especially in the arena’s upper sections. The fans were never dead, always going apeshit for highspots and legends, while supprting creativity and effort. It just felt far tame compared to last year’s SuperShow in NOLA, which I rated a 3.75 (tied for third best overall). That said, I had tons of fun and hope the guys behind this special annual wrestling show can get their shit together.