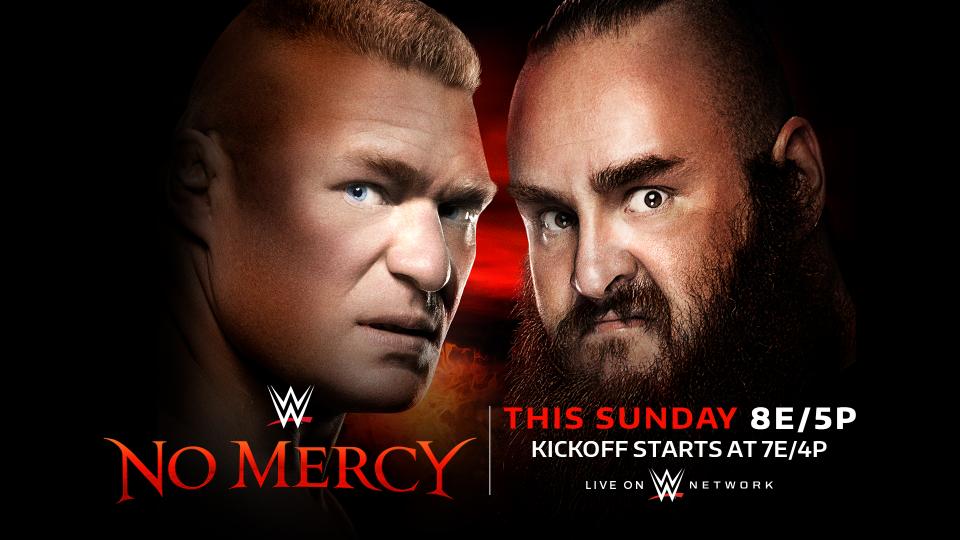 I guess it’s that time again huh? Here we go. No Mercy. This Sunday! Live from the Staples Center in sunny Los Angeles, California!! So what match am I previewing? … Apollo v Elias??? … Seriously???  Prediction: Lol. No.

Soooooo. Bayley is back. And the RAW Women’s division is still stale as ever. I mean, no, I can’t complain about the eye-candy, but isn’t this women’s revolution supposed to about more than that? So we find ourself with a fatal five-way match at No Mercy. I can’t help but think that this is just a sneaky way to keep the belt on Little Miss Bliss without hurting anyone else… other than maybe Emma. #GiveEmmaAChance seriously. But let’s be real. We know Asuka is coming and we know NOBODY is ready for Asuka. What better way to prove that than for “The Goddess of WWE” to run through four of the “top” women on RAW and claim her dominance only to run into the Japanese buzzsaw and drop the title to “The Empress of Tomorrow”. Prediction: Alexa Bliss with the win.

Not even Maryse and the sons of Curt Henning and Mike Rotunda can save The Miz from the wrath he’s about to feel from the son of Kurt Angle! Su-plex! You suck! Su-plex! You suck! And not even the “highly coveted / must-see” Intercontinental championship can save the disastrous Angle/angle Double J found himself in! No matter how many 3.5-4 Bible matches Mr. Jordan has with the two biggest names in the WWE, he’ll never get over with that Angle. I hope I’m wrong. Jason has proved himself a worthwhile singles in the world’s biggest wrestling fed’s biggest weekly show, and Miz has had the title for a little while — looking great with it — without having to really compete. JJ seems more like a fighting champ who’ll wow in the ring, but has only 50% charisma and a current shit gimmick. Prediction: He’ll win.

I cannot remember a time in recent memory when a match with two people I like has left me so indifferent. I also do not recall when two athletes in a feud exposed each other’s flaws more. Balor is a workhorse among workhorses. His matches are hard hitting and fast paced–extremely fast paced. Fast paced matches do not make Wyatt look good. Bray can deliver some killer promos (though long winded and sometimes tedious); he needs someone who can go back and forth with him on the microphone. Balor, in a PG environment, is not the guy. I see Balor still being favored and possibly even protected by Triple H, so I don’t see him picking up another loss to the Eater of Worlds. Prediction: Hopefully after Balor picks up this win, this feud is done and both superstars can move on to bigger and better things.

Saying I’ve been anti-Enzo on 205 Live is an understatement (it’s even my current pinned tweet). I get why they did it; really, I do. They want more eyes on the product and Enzo sells merch. The problem is that, well, Enzo can’t wrestle his way out of a paper bag and he’s super-exposed in the workhorse division. As Gene put it recently, they treat him like a scrub. Which is true, partly because of his lack of in-ring ability and partly because his gimmick is getting stale.

And I’m not the only one that feels that way. Whenever ‘Zo appears onscreen, my feed blows ups with anti-Enzo tweets. Hell, when Braun wrecked him on Raw, #ThankYouStrowman started trending. He absolutely should NOT be the one to end our brilliant Goblin King’s reign for good (I’m still holding out for Cedric). Putting the cruiserweight title on Enzo is basically killing the belt’s credibility. You know, like they killed the original Cruiserweight Championship by putting it on Hornswoggle. Seriously, Hornswoggle was the last Cruiserweight Champion before the revival. Look it up.
Prediction: I’m going with Neville. I acknowledge they’ll probably screw it up and give the Boyhood Dream Championship to Enzo, but I’m going to pretend I live in a world where they don’t give titles to glorified managers with stupid hair and stale promos that last for 20 minutes.

Is it just me or are Ambrose and Rollins even more annoying together than they are on their own? Was Roman Reigns actually the piece that made the Shield cool?? This doesn’t even make sense. Either way “The Lunatic Cringe” & Seth “Frigoff” Rollins (did I get that right?) are your tag team champs. This can’t be a long term thing. Please. I’m actually begging. Cesaro & Sheamus, otherwise known as The Bar, have definitely raised the bar for the tag team division, albeit a very lacking division, and deserve to get their belts back. I’d really love it if this whole thing leads to one of these two “brothers” turning on the other and turning heel again because, let’s be honest, they’re both more palatable when we’re supposed to hate them. Prediction: The Bar take their belts back and save the show.

If 40’s the new 30….and 30’s the new 20…. then No Mercy’s the new Mania. Vince…going all-in in September? Don’t get me wrong, my extreme adhd is glad he did. I’m just not sure what he’s going to do for a Mania main-event. I wouldn’t mind Brock/Roman II if they tell as good a story as I think they did the first time around. I’m not naive to the fact that I’m probably in the smark minority with that opinion and that the majority will let out a collective cringe once it’s announced.

Booking Cena/Reigns and Lesnar/Strowman for No Mercy takes two potential Mania main events off the table unlesssssss they come full circle with some type of retribution angle, which I could also dig. Whatever they decide on doing, we have two guys here going one-on-one who can certainly get a reaction; Cena has made Reigns look downright silly on the mic during the lead-up and it’s been somewhat painful to watch. This may be a genius way of getting Reigns over as fans pity his woeful inability to even remotely touch Cena on the stick but… As far as the match, Cena has far less to gain with a win than the big dog aka Vince’s binkey. Gotta keep building for Mania. Prediction: The Roman Empire Reigns supreme.

Well wrestling, I feel, is on a new rise peeps… and WWE is maybe showing us all a V2.0 of an Attitude Era… I have been excited for that… Fall is in the air and annual WWE game will drop in less then a month. Before all that happens we have… The Staple Center. All the stars come out for the The Main Event…The Universal Champion “The Beast” Brock Lesnar vs “The Monster Among Men” Braun Stroman. Whaoooo! I get chills just thinking about the destruction these two will bring.

The staredowns are over… This has a big fight feel. There hasn’t really been an opponent facing Brock this large in years since Big Show. I’m hoping this will not just be a suplex traffic jam fest… Pillar to Pillar on the 110 and 10! I expect all Hell to break loose very quickly. Leading up this match we have seen steel stairs… tables… barricades being blasted thru… announce tables being broken and I want no different…

Bring it for the Universe and make us proud, Dammit!

Each guy has there own devastating moves that can end a match at any point. I have this small hunch that Heyman might play a part in this match… You never know what kind of Guy Paulie will be on Sunday Night! Prediction: My winner goes to Strowman. But it won’t be EZ getting that strap away from Brock. Stroman has put the time in week after week and it’s time for new chapter to start in the WWE title picture.
#ThankyouStrowman #nomercy