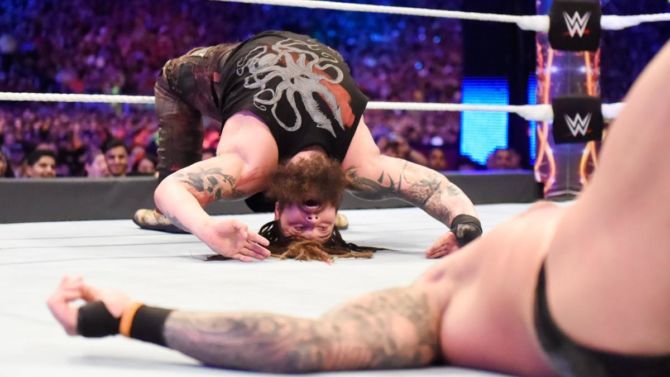 God. You sign two of the best tag team wrestlers in the world, multiple IWGP heavyweight tag team champions, only to bury them on the pre-show with a pair of ham-and-eggers. Yeah–I totally get that Enzo and Big Cass are sort of the “split Young Bucks” along with New Day when it comes to selling WWE merchandise. That’s fine. And, the pair is way over; mostly great on the mic; and not at all afraid to risk their bodies (especially Enzo–although not always in a smart/effective way). That all said, The Club’s recently brief RAW tag team title run wasn’t as bad as imagined and, other than last Monday’s episode, they’ve looked pretty strong. PREDICTION: I expect some shenanigans to happen between Enzo ‘n Cass (hopefully the last big teaser before their inevitable break-up…because Enzo is going to 205 Live, right?), with Anderson and Gallows going over and possibly interfering in the title match later in the night. If not, they mind as well go back to fuckin’ Japan.

In what I can only assume is a last minute effort to add interest to Sunday’s lackluster Fastla.. I mean.. Payback, they have added an episode of Miz TV to the preshow. Now I know what you must be thinking: “Didn’t we already get plenty of build up for another Miz/Dean Ambrose match?” Well, you aren’t wrong. Except for fact that this special edition of Miz TV will feature Finn Balor as its guest. If you’re confused, rest assure you’re not alone– but I may have an answer to this puzzle. The IC title and Demon King are both currently absent from Payback‘s line-up. Given the popularity and strong showings of Ambrose and Balor since returning to RAW… this seems rather foolish.

UNLESS! They plan to have Miz TV end in utter pandemonium and use that mayhem to add either a Miz/Ambrose match for the belt or a triple threat featuring all 3 men. Either way the crowd is promised at least 1 fan favorite on the main card. PREDICTION: The Miz will either jump or provoke a fight with Balor resulting in Ambrose coming to his aid and ending with an Intercontinental Title match later in the night.

WrestleMania Rematch! After a solid–yet mostly forgettable–match on the 4 hour pre-show for Mania this year, Neville and Austin Aries are set to once again do their best to steal the show. Aries has jumped through all the necessary hoops since his loss to earn his rematch. These two men are so very similar to one another. Once they made it to WWE, both of these indie “darlings” were sidelined with injuries.

Neville’s transition from NXT to the Main Roster didn’t really work, with the creative team failing to capture the magic of his championship run (he became a paint-by-numbers filler match guy with a beautiful finisher). Whereas, Austin shifted over to 205 due to an injury that took him off NXT. Thus, Austin has proved week after week that he is as equally dangerous at the announce table as he is in the ring. Expect this match to be filled with hard hits, high-flying acrobatics, and tendon-tearing submissions. PREDICTION: Neville has been on a tear with his bad attitude and even worse beard– and has been holding court over the roster, but Aries is going to kick things up to the A Double Level and walk out with the belt. This match will be overshadowed, but should not be overlooked by wrestling fans.

Since Samoa Joe made his main roster debut fans have been foaming at the mouth for Joe to get a chance to show his viciousness and have him feud with top talent. After being unceremoniously left out of the Show of Shows, WrestleMania, he’ll get his—ahem—payback at Payback! Facing down Seth “Freaking” Rollins, I do believe it will steal the show! The Samoan Submission Machine will no doubt be going after the Architect’s bad knee throughout the match, expect the match to start out slow and build to a brutal finish. PREDICTION: Samoa Joe will go over. Rollins already vanquished the King of Kings, his great nemesis, but what WWE needs is to exemplify Joe as an unstoppable monster all the while illustrating Rollins as the scrappy hero with a never say die attitude.

So, let me get this straight: “The Face of America”, Kevin Owens is defending the U.S. Title against Chris Jericho and the winner brings the U.S. Title to Smackdown Live and the loser stays on RAW. (Or goes on tour with their band, Fozzy. Ahem.) Wait. Why am I writing about this on the RAW PPV again? This is clearly a Backlash match. No? Seriously? What STUPID IDIOT put this match on this card? You know what happens when you make pointless matches on the wrong show’s PPV? Hmm? Do you know what happens? … WWE creative … YOU JUST MADE THE LIST!!! … PREDICTION: K.O. takes the title to Smackdown Live obviously. Stupid idiots.

Really?! We’re still doing this? Even though they’re not even on the same brand anymore? Well, okay…
*takes deep breath* Randy Orton and Bray Wyatt started a feud sometime around SummerSlam because Bray is creepy and that’s all his feuds start. Randy joined the Wyatts, they won the tag belts, they lost the tag belts, Luke Harper left, Randy won the Rumble, Bray won the WWE Championship, Randy gave up his title shot, AJ got the title shot, Randy became an arsonist and corpse defiler, Randy gets his title shot back and wins the title. Whew.

Fast-forward to now. Bray’s currently on RAW, but is still focused on Randy. Because, you know, Randy burned down his house and his sister’s gravesite. So now we have this Smackdown Live guy wrestling on a RAW-branded PPV in what sounds like a rip-off of Raven’s Clockwork Orange House of Fun match from TNA. I’m sure it’ll be just as thrilling. PREDICTION: Randy wins just as the crowd comes back from getting more beer.

I was shocked just as much as anyone when The Hardy’s made the return too a WWE ring in years and to win tag titles. Jeff and Matt look better then ever and are on some HOF run. This match feels like it will be a good ol’ slobber knocker, as JR would call it. The chemistry both have shown in RAW is great TV. The Hardy’s are at the top of there game right now and I’m not 💯 sure Cesaro and Sheamus have what it takes to take them down, although I would like to see some more attitude from the pair: they look like they can really show off some high impact moves with Jeff doing his rag doll style and Matt taking a lot of punishment. PREDICTION: The C-Swing on Jeff and bro-kick to Matt. Sprinkle in some tables..ladders and chairs. I’m feeling a typical Hardy’s match, setting up high flying antics and ending in a side effect and Swanton Bomb for the win. But look out for The Good Brothers! This can be a perfect time to step in and make a PPV Moment.

It’s the match you’ve all been waiting for! Maybe Bayley? Not me, personally, but I’m guessing some of you are. I’ve never been a fan of “You just got here! Here’s a title shot!” Hated it with Balor (probably the worst/best example, but that’s another thing altogether), when they do it with Cena returns, Charlotte on SD, etc.. PREDICTION: Bay will botch a few moves. The Apostles call her “Botchley”–they think it’s funny–and Alexa will be great while losing. They want her on the map, but I think they also know it’s bull to put the belt on someone who just got to RAW (then again.. Balor, so who knows?). Bayley wins. Barely.

Watching Braun Strowman the last handful of weeks has been a joy to me. He’s injected a new life into the ‘big man’ group in WWE’s roster, something sorely needed with aging guys like Big Show (and, even more-so, if the rumors of Undertakers’ retirement hold true). Braun’s promos of beating stars up left and right back-stage, and heaving a ambulance, to a ring-breaking match with Big Show have done wonders for his visibility and I think speak to where his character is going in the future and where he’ll ultimately end up. His opponent Reigns, on the other hand, hasn’t done a lot the last few weeks aside from being on the receiving end of some of the beatings; that said, its still only recent memory that the company pushed Reigns over the Undertaker and claim the ring was his yard. PREDICTION: Which is ultimately how this match between the unstoppable force and the immovable object is destined to end — with Roman‘s hand raised after he continue to dig deeper into a well of a strength until he overcomes.