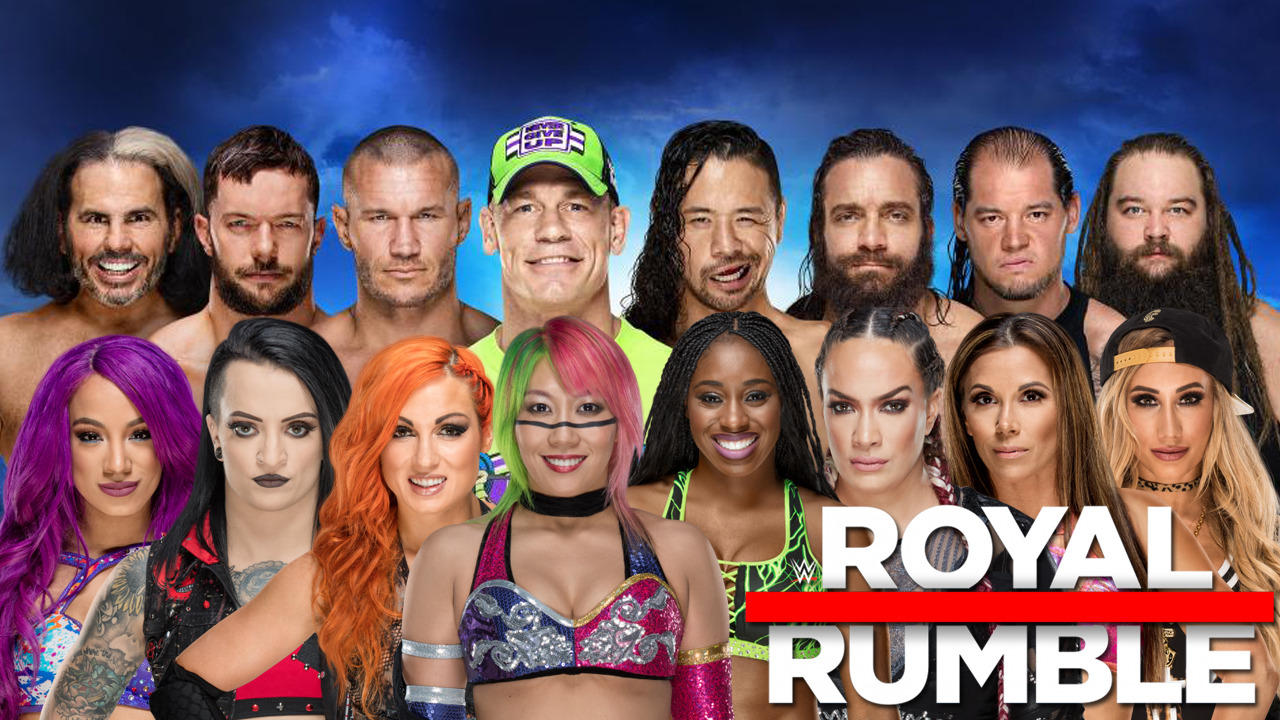 The Tag Division has been one of the few bright spots left on the blue brand over the last year (seriously, remember when SD was Brand of the Year?). After winning the excellent triple threat match for the No. 1 contender spot back in December, American Alpha 2.0/Team Angle 3.0 got screwed. Their title match was restarted after Benjamin and Gable’s win because neither man involved in the pin was legal. So what does Daniel Bryan want them to do, beat the Usos twice in one night? As it turns out, YES! YES! YES!

PREDICTION: AND NEW…The Usos don’t need the titles anymore and Jey got himself into a spot of trouble, so the clear choice is to put the titles on American Beta. Benjamin and Gable get the first and third falls; Usos get the second by banking on no one being able to tell them apart besides me and their family (tattoos, y’all, use the tattoos).

Jason Jordan has been a heel for a long minute now, but with nothing for him to do and Dean Ambrose heading to the shelf, RAW GM Kurt Angle (a.k.a. Vinnie Mac and Kevin Dunn) saw fit to throw this oddball teaming of Jordan & Able together. “The Bar”, after months of trying and trying to get over, are — by far — the far superior team, recent jobs withstanding, and I expect Seth Rollins to go on a bit of a singles run until Dean comes back or Vince retires/dies and Hunter finally makes Roman the tag match superstar we all know he NEEDS to be. Expect Jordan to walk out on Seth or fuck him over somehow and erase this current silliness from the brand.

PREDICTION: New champions, The Bar. And can The Revival come out and “revive” their careers by beating the living hell out of Sheamus, Cesaro and Rollins post-match? Come on, man; they got the AARP “rub” on Monday, didn’t they?

Well NERDS, the 3 Biggest Baddest Bohemis is on the Main Event dish. You have Monster, a Beast and Demon fighting for the richest prize in the WWE: The Universal Championship. This seems like it has been brewing for months but the wait is finally over. The destruction that will take place in the squared circle can only be stated and I quote, as Good Ol’ JR would say, “A Slobber Knocker”. The path that Braun Strowman has took the past year to make himself the face of RAW–a giant pleasure to watch. Kane has come back to do one thing and go out in style.. but “the reigning, defending” champ, Brock Lesnar, is the pickle too. He has met his match and everyone sees it. Being Triple Threat (no DQ), this will be a fight and it will be nasty: Tables..Chairs..Ladders.. Semi Trucks..Carnage.

PREDICTION: I’m sure Strowman can survive a Choke Slam from Hell and F5s all over the Arena. It’s his time and a Mania match featuring Cena or Reigns vs. Braun would be epic. (I also have a feeling The Big Show will make an appearance to make a 4-way Bash for the start of WrestleMania Season).

“The Champ That Runs the Camp”, A.. J.. Styles, will defend against the former ROH/PWG team of Owens and Zayn. Styles sarcastically suggested that he could beat both Sami and Kevin (a.k.a. “Kami” *sigh*) at once and Smackdown Live GM Daniel Bryan made the match official. We could leave Sunday with WWE Co-World Champions, but I don’t see that happening. Hopefully, we get a show-stealing performance from 3 of the best wrestlers in the world but something tells me they will just be the pawns in the continuing Shane McMahon and Daniel Bryan saga.

The first ever Women’s Royal Rumble match is set to be a huge success or gigantic failure. Giving the women equal importance and respect is awesome. I have serious concerns about how they are going to fill all 30 spots. With the entire Women’s roster there are still only 18/30 slots filled. Should they go as far as to give the entire NXT roster a slot as well, it would make 27/30. This means that no matter what there will have to be surprise entrants — the best part of the Rumble. That anticipation of who’s going to come out when the countdown hits 0 and losing my damn mind when a huge debut like AJ Styles happens is EVERYTHING! This would be an amazing opportunity for WWE to introduce some amazing indy talent like Santana Garrett or correct their #RAW25 mistake and give us a Lita appearance. However, given WWE’s track record we’re more likely to see some disappointing entrants like Brie Bella or Stephanie McMahon getting up from the announce table. I want them to take this match seriously and put on a real contest and not a bunch of joke picks and hair pulling like we’ve gotten from past “diva style” battle royals. I hope they are smart in their match order so we don’t get a bored crowd sitting through 2 hour long matches in one night. Either way this match is going to make history.

PREDICTION: The only entrant I feel is a lock to be in the Rumble is NXT champion, Ember Moon. As such it would be awesome to see her and Asuka go at it one more time for the final slot. If this doesn’t happen it will be Nia vs. Asuka in the end and Asuka coming out on top.

Here we are ladies and gentlemen, the sports entertainment spectacular free-for-all, and my personal favorite event, where stars are made, unlikely dreams come true, and everyone raucously boos Roman Reigns. Last few years we’ve had the likes of Blue- I mean Bautista, Triple H, and Randy Orton winning it all, essentially three years of the Rumble dominated by Evolution, you’d think we’re in the early 2000s! If the ‘E is pushing hard for this New Era, they so desperately need, they’ll be smart to crown some new blood. My early favorite was Samoa Joe until his foot injury, but the two favorites that stand out are Nakamura and Balor; besides, with Balor there’s sure to be Club shenanigans afoot. There’s a number of scenarios you can play with both superstars, whether a David/Goliath story with Finn seeking the Universal Championship against whatever monster retains or attains the belt or going full on heel and The Club invading Smackdown. With Shinsuke, that long awaited face off with Styles. So far there have 17 of the 30 entrants announced to participate, expect surprise entrants from rumors swirling with EC3, Daniel Bryan to Batista and *gasp* Kenny Omega! (Smarks will shoot me down but Jericho is the key to all this, I’m telling you.) Vince wouldn’t let a future hall of famer work one of the biggest shows for a rival company without some sort of return, quid pro quo. There has to be some working relationship between NJPW and the ‘E!

My stone cold lock of the century of the week…