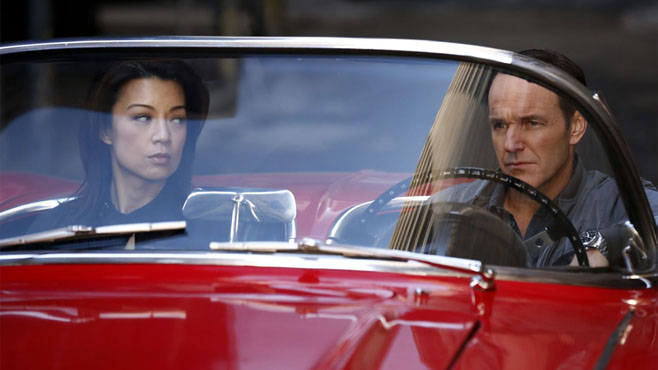 Hey, The Divine One here. With a big TV festival like PaleyFest going on, you can bet I have another serving of full-on geek goodness for you all. We’re at the Dolby Theatre, so let’s crank it up!

With an early screening of the next episode (April 1), you can bet Marvel’s Agents of S.H.I.E.L.D. panel was especially awesome. Oh yeah — much like D23, some of us were blessed to watch the full ep ahead of time. More importantly, it’s pretty damn great! I’m sorry I can’t share any of the finer details with our lovely congregation, but just know that if by any chance you’ve been undecided — or previously disappointed — with S.H.I.E.L.D., this is the episode that will win you over.

More good news: Starting April 1st, ABC will air seven episodes in a row — including the season finale. No breaks or reruns! Producer Jeph Loeb (Batman: The Long Halloween) also mentions that following the comeback episode is Captain America: The Winter Soldier, which hits theaters just a few days later, and “an episode (of AOS that) WE wouldn’t want you to miss” right after on April 8.

Our moderator this evening, Felicia Day (Geek & Sundry), pounced on the tease. “So is there a tie-in with the movie that directly affects the show?” After the series referenced instances of the S.H.I.E.L.D. program in The Avengers and Thor sequel, Loeb slyly says that “it would certainly not surprise anyone if things that happen in (The Winter Soldier) affect the show you’re talking about.” You clever Marvel people. Always prepared!

Marvel also addressed earlier in the panel that although the show’s future is uncertain (at press time, ABC has yet to pick up next season), they are ready. Producer Jeffrey Bell (Alias) claims the producers knew “where they wanted to go with this season and they know where Season 2 and Season 3 are going to end. And we know which character will still be alive. This is, in fact, a Joss Whedon joint.”

The man who leads the team, Agent Coulson (Clark Gregg), has been going through rough times lately, especially in his discovery of how he came back from the dead. How will this affect him going forward? “The real dilemma has been Coulson starting to feel physically the way a lot of trauma survivors do…he doesn’t feel the same.” Well that and the fact that they basically wiped your memory and made you think you were on a beach in Tahiti! ”How can you work for an organization that traffics in secrets and not have secrets kept from you?” Looks like Coulson has figured it out and is far from happy with the big bosses.