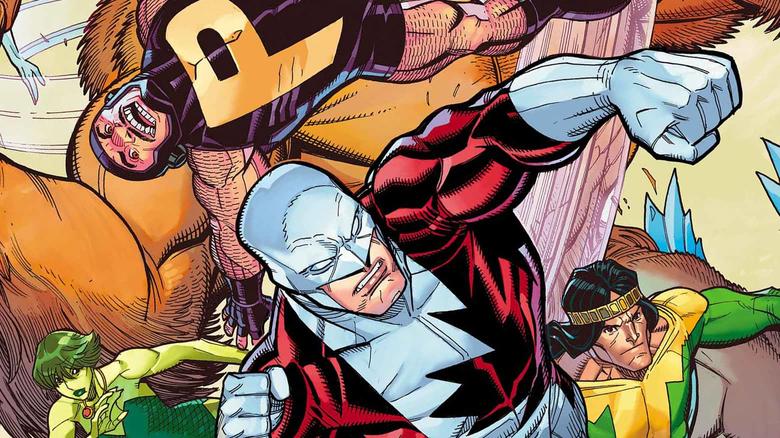 How Canadian can a one-shot be? Well, Alpha Flight: True North is three stories about our favorite Canuck superteam written and drawn by a team of creators from America’s Hat. The comic starts with “Mired in the Past,” penned by Jim Zub (Uncanny Avengers) with pencils by Max Dunbar (Champions). Snowbird and Talisman investigate a small, seemingly abandoned town in the arctic circle and discover some monsters for their trouble. Dunbar’s art here is probably the best of the three stories – the monsters look genuinely creepy and Snowbird remains incredibly expressive, even when she’s transformed into a wolf. The story itself starts out interestingly, but ends a bit flat.

It’s followed up with “Monsters” from Jed MacKay (Black Cat) and Djibril Morissette-Phan (X-Men Gold). The Beaubier twins want to sunbathe after completing an assignment on Prince Edward Island, so Puck tells Marrina a tale (which Marrina refers to as a “confession”). MacKay described it as a story of friendship and history, which shines through in every panel. Morisette-Phan’s art during the flashbacks is all sepia tones and blurs, emphasizing the history half of the narrative. 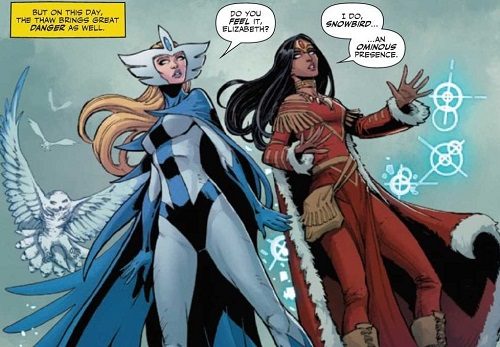 The book ends with “Illegal Guardians” (ha!) that catches up with Heather Hudson and her daughter on the run while they’re being helped by Heather’s husband, James. Ed Brisson (Dead Man Logan) and Scott Hepburn (Deadpool) give us a story that feels like old school Alpha Flight, but is clearly just there to set up future stories. The cliffhanger twist makes it not as self-contained as the previous tales and it feels like this either should’ve been the start of the one-shot or the start of new, terran-based series that picks up where volume four left off. Overall, True North lives up to its name. It’s a love letter to the original Alpha Flight and fans of the classic team will enjoy it. 3.75/5 Wendigos.

You would think a line up of Brian Bendis, Jim Lee, Scott Williams and Alex Sinclair would result in something magical. That’s sadly not the case with Legion of Superheroes: Millennium. The story revolves around Rose/Thorn who is attempting to find out more about herself in a future society where she is struggling to fit in with herself. She pays a visit to Batman Beyond and there’s a small run-in with Supergirl and an elder protecting Superman’s suit. It just plain. Though I remain optimistic that this story will get better for the sole reason that the all-star cast in charge of this series. 2/5 Bibles.

Wow, I have thoroughly been enjoying Absolute Carnage, particularly this “Scream” mini series. Let’s start with the artwork. Gerardo Sandoval, Victor Nava and Erick Arciniega are doing a great job capturing the grittiness of the symbiotes– symbiotes that are not supposed to be pretty like Spider-Man. They are literally sentient bioweapons that can cause a lot of damage! The fight scenes show Scream’s offensive usage of her symbiote which was pretty cool. We also get further insight into the brutish behavior of Carnage’s “Mindless Ones”.

The story is good too. Cullen Bunn does a great job of allowing us to peer into the Scream symbiotes’ inner-dialogue. This gives us an even further view into the insanity that Mr. Cassidy is creating this time around. I also like this portrayal of Andi Benton. I was always a bit annoyed by her character; however, she is definitely holding her own in this book. As a huge fan of horror, I would definitely classify this arc as horror — this whole “GOD IS COMING” thing really creeps me out (and relative to GHG, yeah!). Absolute Carnage is really going into some dark places and I am here for it. 4/5 Books!

The story starts with the grand opening of Everything, a new store which sells, well, EVERYTHING. We’re introduced to a cast of people, whom most never meet, and how they come into contact with the store set in Holland, Michigan in 1980. The characters range from a city manager, a store manager, a school dropout, an electronics store employee, and an alcoholic. As the day continues after the opening, a few odds things happen and only gets stranger leading into the evening. What exactly is this store? Is it the store itself causing this?

Christopher Cantwell sells a story with a groundedness that matches its subtlety. I couldn’t help but think “and then what happened” at the end of the issue. I.N.J. Culbard‘s art gives a texture for a period, beginning and ending with store ads that echo its time. While reading Everything, I was trying to figure out what kind of story is being set up. Is the influence Stephen King, Chopping Mall or something else. It definitely fell into King territory, and was confirmed in a letter by the writer at the end of the issue. The issue’s central focus was on the characters and
their dynamics in the set up for what role they could play in what’s to come. Just thinking about kinda makes me more interested and I think that’s the effect the creative team is going for. 3/5 Bibles.