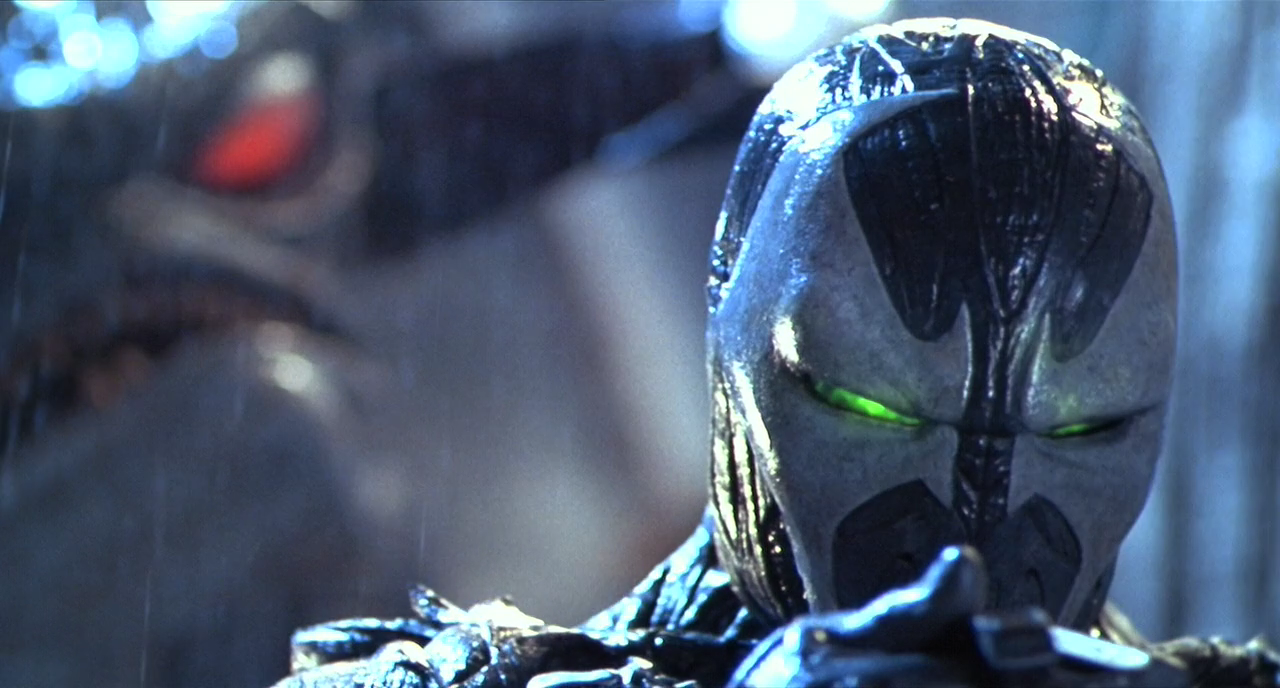 One thing we’re proud of at GodHatesGeeks (OK– so we’re proud of EVERYHING) is that the majority of our comic features, be it the Fistful or the Stash, all sort of pack a thematic element to them.

So, while we’re all impatiently waiting for Arkham Knight to make its console debut so we can dish out some vigilante justice and drive the Bat-Tank…err… Batmobile, DC has given us a new comic title to give us a lead in to the summer game release…

Arkham Knight #1 takes place immediately following 2011’s arguable GOTY Arkham City, with the Caped Crusader carrying the Joker’s lifeless body from the theater and silently handing the clown corpse to the GCPD… who all think Batman killed him. If you’ve played the game, you know the truth. If you haven’t played the game… get on that! Batman finally decides to take Alfred’s advice finally: head home, heal up and get some much needed rest. Along the way, he has an uninteresting encounter with Electricutioner 2.0, who he disables and leaves gift wrapped for Gordon and the police.

Once home, Alfred stitches up Bruce’s wounds and gives him some of his patented sage advice about how “Gotham wants the Batman, but it needs Bruce Wayne.” Alfred wants Bruce to use the Wayne fortune to make the city a better place, the way Batman makes the streets a safer place. His pitch boils down to Batman protects Gotham by night, so Bruce must help it by day. Despite the presence of current Batman and Robin maestro, Peter Tomasi, it’s all stuff we’ve seen before.

But… while that’s going on, a mysterious new character appears before the Electricutioner and gives a rather chilling line about how Batman rules the night because– he knows how to use fear to his advantage, but won’t be frightened. He makes it clear that he knows Batman far too well, and that when he goes about his work, the criminals will think he and the Bat fight the same fight, but notes that their lives mean nothing to him. He then blows the dudes head off with a shotgun!

This mystery “anti-bat” is the new character, “The Arkham Knight” and there has been a ton of speculation about who he is. But based on the few panels we see here, he is someone close to Batman. He’s familiar with Batman and knows how “broken he has become”. 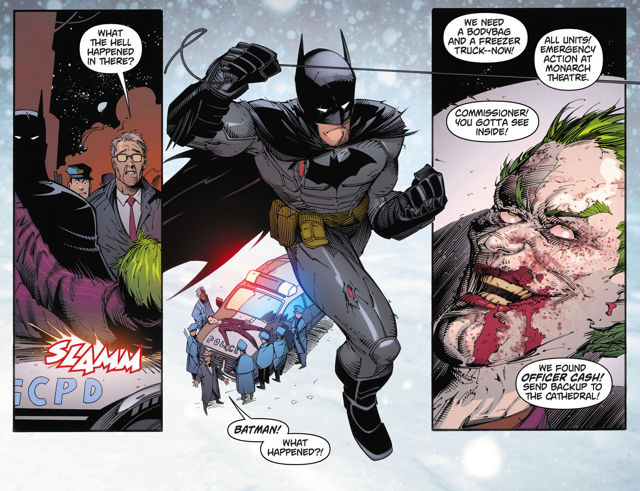 Which leads me to my theory… if you don’t want the game to potentially be spoiled, stop reading… I think it’s Jason Todd. Post death and Lazarus rejuvenation, but pre-Red Hood. He still has a screw loose from being dead for so long. Just a theory, but that’s who I think it is.

Back to the comic, I think it’s a good setup for things to come. I definitely want to read more, which is always a good sign. The artwork from Art Thibert and Viktor Bogdanovic isn’t my cup of tea, but I can get beyond that. I’m still eager for more, and more excited to play the game later this year so we can learn more about this frightening Knight. 3.75/5 Bat-Bibles. – Dave Story

Landing right out of Spawn #250 that you faithful GHG nerds may remember was bashed by yours truly, Resurrection sets the new status quo and brings us back the faithful trusty Spawn we all grew up with. Though this issue is barely more than a “Hey, how you doing? Meet God, he’s a dog.” This issue does masterfully bring us up-to-date on Al Simmons and what he has been doing since committing Spawnal-suicide through a few well lay’ed out panels. So far the new story seems to be a rehashed over played Angel/Demon dynamic, which if you remember has pushed Spawn through 250 issues, the new creative team of Paul Jenkins (Constantine, Justice League Dark) and artist Jonboy Meyers (GeNext: United and one really nice looking website) do give Simmons a more moving dynamic of a hero journey than the original 92’ era ever accomplished.

After rereading the grueling Spawn #250, Jonboy’s artistic talents and more over the top Japanese-themed Adult cartoon techniques are a snazzy and welcome addition. Spawn does look a bit like a sword wielding Venom with his his open-mouthed toothy design, but since Marvel’s Venom looks less like himself these days and more like an emo Rorschach from Watchmen– I will let this slide. The stressed political element, especially dealing with similar Ferguson motifs do help to add a realistic feel to a present day Spawn; but hopefully they develop this into more than just a way to be political through comic form. Despite all its abrasiveness, I look forward to where this new creative team goes with McFarlane’s child, and, once again, I can finally say I’m looking forward to a Spawn comic with issue #251 next month. The traveling nerd approved! 4/5 Celestial Puppies agree!

These are just some of the words emphasized from the “Senior Project Coordinator” of Kerberos Initiative in Cullen (Magneto, Sinestro) Bunn‘s new Oni Press Title, HELLBREAK. I emphasize the title in all CAPS, because whenever there’s a comic that toys around with (sci)fictional religion, you just know we’re clamoring at the bit to review it. Thankfully for all of our lovely fans — and those super-enthused by such material (see: Robert Kirkman’s Outcast, the classic Preacher, and the forthcoming Image titles Black Road, Heaven, Savior, and Sons of the Devil; yes– whoa!) — HELLBREAK‘s contractor makes his coin reclaiming souls; readers will be enamored by his authoritative acerbity and Ron L. Hubbard haircut. The deft stigmatic hyperbole leads to often more humorous language (“This is definitely a friendly corner of the underworld” and “My boss went to hell and all I got was a skinny, half-naked dude”) once we meet more members of Team Orpheus, and Brian (Big Trouble in Little China) Churilla‘s panels keeps things as shrouded in awkward darkness and cartoonish creepiness as allowed. As I said on this podcast, Bunn was the breakout writer of 2014 for me– and HELLBREAK might be his most delightful performance yet. He surely knows how to write people at their worst, and we’re all the better for it. 4/5 Variations of Satanic Hell.

Stemming out of Jim Krueger and Alex Ross’s Project Superpowers, comes Warren Ellis (Moon Knight, Iron Man) and Colton (The Spider, Jennifer Blood) Worley’s Blackcross. The series continues to bring forth comic book characters from the Golden Age of comics that have been relegated to the past and have no real following and gives them a “fresh coat of paint” so to speak. And when you are dealing with golden age characters — that no one really knows that much about — why not give someone like Ellis a chance to bring characters like, The American Spirit, The Black Terror and who I’m guessing will turn out to be Masquerade and the Flame to life in a whole new way?

Ellis has such a great knack for writing comics that go off the beaten path and the artwork by Worley brings a very real, very grounded style to the comics that really makes me excited for the next issue. And let me go one step forward and bring up colorist Morgan Hickman, I know I never bring up the colorist, but his muted colors bring such a noir feel to this comic that makes it read like a comic book but also like a mini-movie in your hands. Pick this book up. 4.5/5 Inhabiting Golden Aged Spirits.

Boy oh boy…never in a million years would I have guessed that character named Neverboy would peak my interest like this. The cover alone (Conan Nolan) had me intrigued.

I’ll admit, I’ve dabbled in a bit of magical fungus in my day and that may be why I feel so connected to this hallucinogenic hero. The colors, the art style (Tyler Jenkins), the flow of events, they all fit well in the realm of the trippy. The first issue, by Killjoys co-creator Shaun Simon, gives you just enough to make you question everything. Reality, existence, and even family have blurred borders by the time you reach the last page. This issue doesn’t reveal the full explanation of exactly who Neverboy is; instead, you are left with awesome dots of information and a handful of possible lines to try to connect them with.

THIS Deacon (ahem, Dave) is excited for the next issue and all the rest that follow. Looking forward to watching Neverboy develop and travel through the wide-eyed trippy universe. 4/5 Neverbibles.

It bears mentioning, and this may be nerd-blasphemy, but I’ve always filed Spider-Man in the TL;DR column of Marvel Comics, with Spidey’s past endeavors lining him up with the Avengers, The Fantastic Four … basically everybody, I think. (Like I said, TL;DR). All of this adds up to a lot of baggage, which then gets ported into cross-title events like Axis and Inhumans, and adds up to a comic that feels like it requires homework even before you turn to page one. ASMS #1 is an engaging – thanks to strong imagery by Glimmer Man‘s Luca Pizzari, and breezily excellent Peter Parkerisms from Jimmy Kimmel Live‘s Jeff Loveness – and for those more initiated than I, probably essential to stay up on what’s doing in Marvel-land.

The trouble is, anything with a #1 on the cover feels like an inviting place to hop into a story, and in that vein, this one is a letdown, dependent as it is on all the other goings-on in the Marvel Universe. This isn’t only an issue because of the “homework effect” mentioned earlier, but because the issue never really tells its own story so much as connect threads from other storylines. Forget the “Part 1 of 3” the cover promises; this is Part A Million of A Billion, and unless you’re willing to tune in (and shell out) for all the rest, I’m not sure this works as a standalone experience. 2/5 Webs.