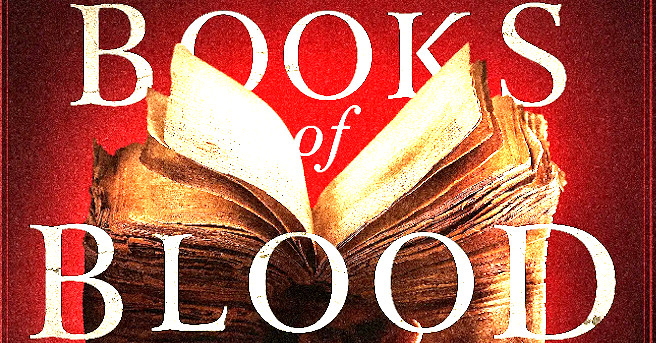 Hulu’s horror anthology, Books of Blood, is based on Clive Barker’s books of the same name published between 1984 and 1985 and spanned six volumes. There have been eight previous adaptations of Barker’s version of The Books of Blood including Candyman, The Midnight Meat Train, and another adaptation of “The Book of Blood” from 2007.

*This does contain spoilers*

Each story in the film is named after one of its characters, but these names are carved in flesh and ooze blood whenever the title screen switches from one story to the next. Everything is also much more connected than the film first lets on…

Jenna (Britt Robertson) has a psychological breakdown and drops out of college. She is hyper sensitive to sound, especially crunching and chewing. She carries around a pair of noise canceling headphones to drown out the world around her.

She runs away when she learns that her mom wants to re-institutionalize her. She gets off a bus out of town when she thinks she’s being followed. Jenna ends up at a bed and breakfast owned by a kind middle aged couple. Sam (Nicholas Campbell) is a carpenter while Ellie (Freda Foh Shen) is a gardener.

Turns out Sam and Ellie are harvesting their children, grandchildren, and every guest they’ve ever had in the walls and floors of their house as an improvised garden. They scoop out their eyes and rip out their tongues so their guests no longer have to cry or scream ever again. The Jenna segment has a terrifying night terror/sleep paralysis segment that makes your skin crawl, but it’s nearly ruined by a bunch of computer generated roaches.

Miles (Etienne Kellici) is a seven year old that dies of Leukemia. His mother, Mary (Anna Friel), believes that there’s nothing after death. Simon (Rafi Gavron) tracks Mary down to let her know that he is a medium and that Miles sent him to find her. Simon’s naked convocations are spectacles that leave Simon twitching and the walls of a white room covered in bloody messages from the dead. Mary begins to believe that Simon is this unconventional doorway between her and Miles, but something much more sinister is at hand.

Simon eventually becomes the physical representation of The Book of Blood. The dead have stories to tell and flesh is their page. The naked human body being covered from head to toe in carved, bloody words has this Hellraiser quality to it. Clive Barker has certainly left his mark on the horror genre.

Bennett (Yul Vazquez) is a hitman searching for The Book of Blood to use for newfound wealth. He kills a librarian that puts the thought of obtaining the book in his head. Bennett searches for the book throughout the film, but doesn’t realize what gruesome horrors it represents.

Books of Blood has an abysmal online reputation. However, the film is a solid horror anthology. The screenplay is surprisingly strong, the stories are intriguing, and there’s genuine, thought-provoking dialogue. Its bloodiest moment is seeing the after effects of a chainsaw meeting human flesh, so it’s a bit light on gore.

The film’s Tales From the Crypt ambience is its biggest strength. The horror formula tends to fall into this inevitable wheel of predictability and redundancy; it all feels the same. All of the stories from Books of Blood, apart from the title story, feel fresh and new. When most modern horror seems to feel like a rehash of a previous concept, Books of Blood deserves recognition for at least trying to be original.

This new version of Books of Blood has impeccable writing and Britt Robertson delivers an exhaustively mesmerizing and impassioned performance. Books of Blood has encapsulated Clive Barker’s writing style of incorporating unimaginable horror with the fractured reality of being a flawed human being. It’s a must watch for horror fans. 3.5/5 Skin Ripping Bibles.

Books of Blood is now streaming on Hulu.