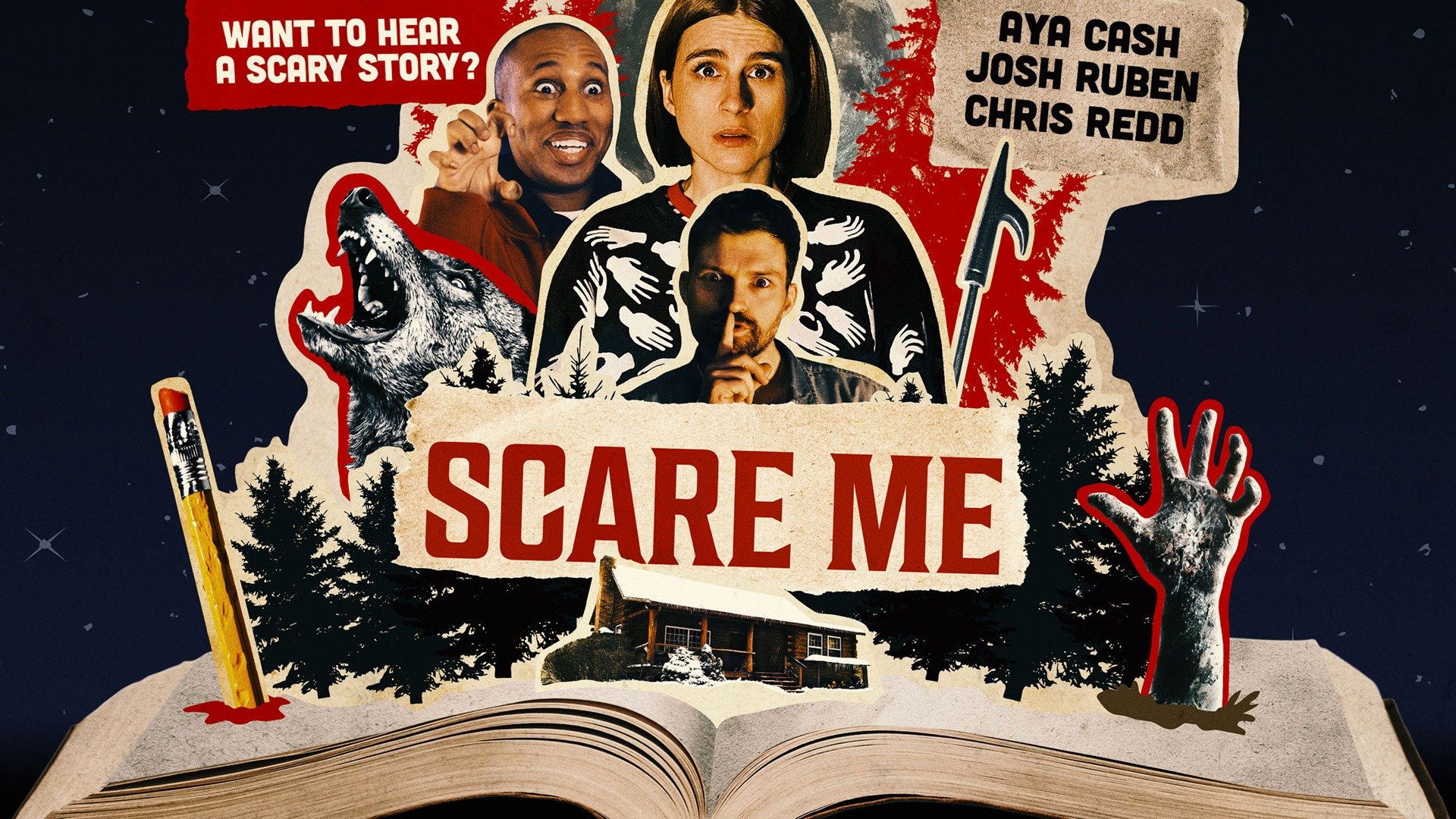 Happy Halloween, geeks and geekettes! Sure, can anything really be scarier than the reality in which we all find ourselves, currently in the Unmentionable Time? Probably not, but that doesn’t mean that the good folks at Shudder aren’t going to do their best to try to serve up some spooky goodness this Halloween. One of the curator’s first titles to launch this October was director/writer/producer/star Josh Rueben‘s feature horror comedy, Scare Me… 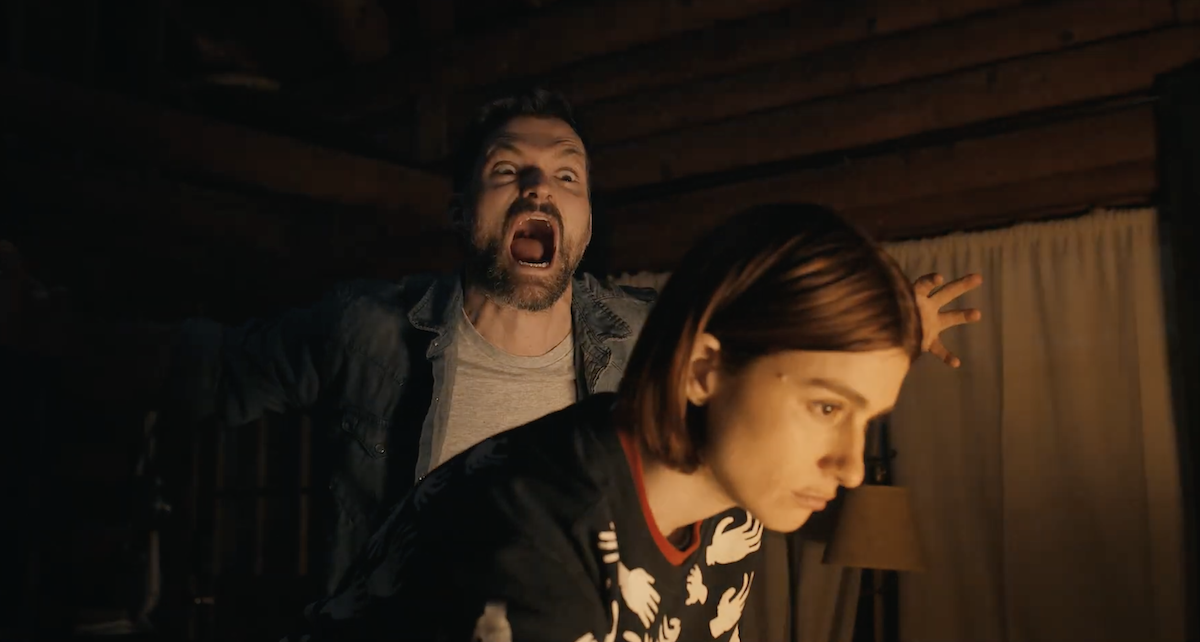 Rueben stars as Fred Banks, a struggling writer who has rented a cabin in the Catskills to seclude himself and focus on his writing. While gathering supplies for his night in, he meets Fanny Addie (Aya Cash), a successful horror writer in her own, who has likewise rented the cabin next to Fred’s for the same purpose. Returning to his cabin, Fred is bereft of ideas, until a thunderstorm knocks out the power in the area, prompting Fanny to hunker down with some booze to wait the night out. Bored, drunk, and her interest piqued in learning that he too is writer, Fanny puts Fred on the spot to tell her a terrifying tale. As they each add bits and pieces to the story, the tale unfolds naturally, and each writer becomes more comfortable putting up the scares on a whim.

The film takes the conceit of the campfire story and recreates it mostly successfully here. With each additional detail to their scary stories, Fanny and Fred each imagine shadows, sound effects, and lighting. This is mainly a study in sound and lighting design, as the production is given life through these embellishments. Cinematographer Brandan H. Banks is capable at making the cabin seems imposing…or even some foreign location…by playing with lighting effects here. 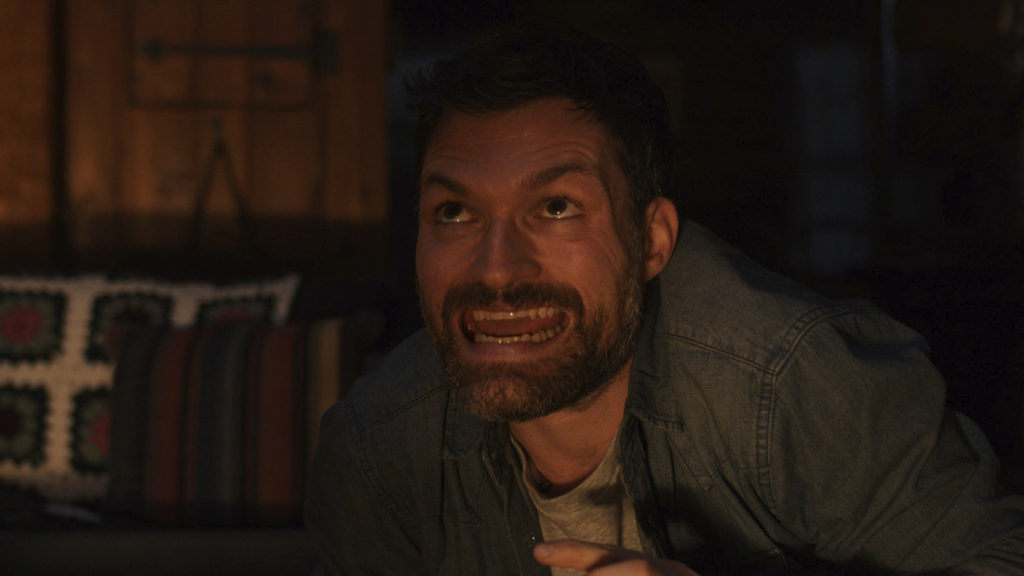 Rueben’s script is strong in its comedy. Fred’s fumbling at telling his first scary story — replete with dead ends, lack of details, and stereotypical plotting — makes way for more adept, detailed storytelling as the film moves on (his story about a troll who lives in a corporate office’s air vent is one of the funniest bits Fred gets on his own). As both Fanny and Fred each jump in, adding details and embellishments to each other’s stories, you can see just how adept each is at playing off of, and feeding into, each other.

The most welcome surprise is Chris Redd as Carlo, a pizza deliverer who, as a fan of Fanny’s, spends some some time with them, and joins in the telling of their final story, a tale about an American Idol-esque singer who sells her soul to Satan, only for him to come collect in the middle of a live broadcast performance. Redd is always a welcome addition to any movie, particularly as his comedic timing is impeccable (go re-watch Popstar: Never Stop Never Stopping to get an idea of just how easily Redd can steal a show).

The standout, though, is Cash, who seems to be having her moment this year. She easily channels the smarmy-smart-ass attitude she teases as Stormfront on Amazon’s The Boys into something much more personable if not any less duplicitous. The ability for an actor to build a scene, and a setting, using nothing but (mostly) monologue has always been impressive to me, and it comes across as natural to her.

This isn’t to say the movie isn’t without its genuine scares and blood. Surprisingly (or maybe not so much), the movie takes a third act detour into the very genre it was exploring, and the result is some good, old fashioned cinematic carnage. With the prospect of merely telling a spooky story, the movie finally allows itself to become one. A fine balance of spookiness, and comedy, Scare Me is a smooth, quick film with a small cast, smaller settings, yet some big laughs from two undersold comedic performers. While you’ve got the classics to keep you going tonight after whatever socially-distance mischief may be going on, this is a good nightcap. 4/5 Signed Copies of Venus.

Scare Me is now streaming on Shudder.