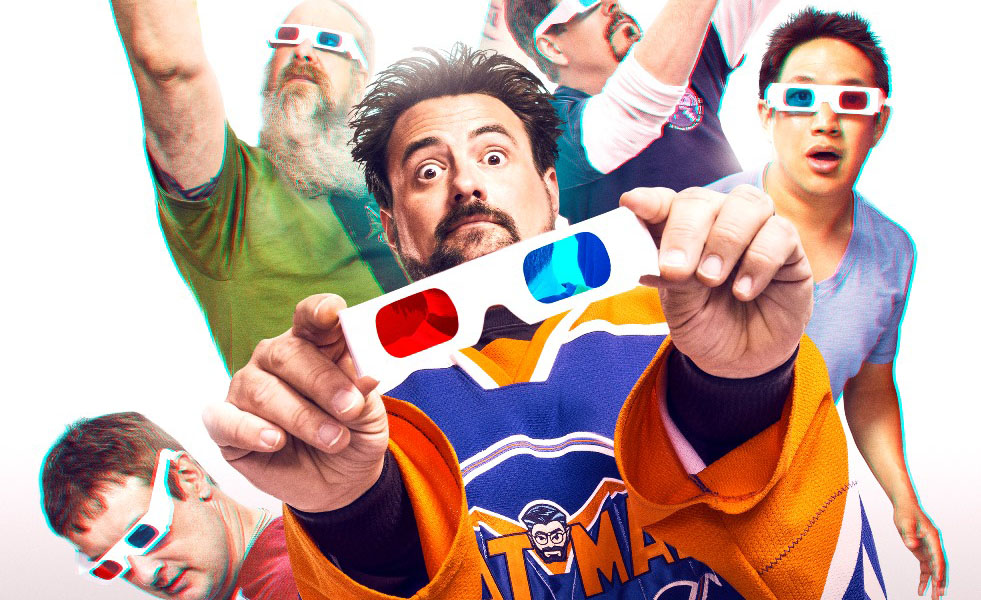 If you missed any of the first few episodes, I’ve got you all covered. THEN, you can see it on demand via your local cable provider or right here on the AMC website. Season 4 thus far sees our favorite comic clerks blessed with the presence of not only a true beauty, but Kevin (um, Clerks) Smith‘s own daughter Harley Quinn.

Yeah, not a typo.

Smith and the boys bring her in for a guest star for the first episode. She is adorable and nervous as they help her prepare for her role in Smith’s new script that will spin off of the clerks from Tusk. Kinda brilliant, Kevin. Can’t wait. Harley learns the ropes of bartering and bargaining with customers trying to sell there “crap”. Well, most of the stuff you’ll find on CBM is surely on the side of at least “wondrous crap”, although I can’t say the same for one item in particular: Zombie Babies. The seller of these items began making these dolls when she couldn’t find one for a Halloween outfit for a “breast feeding zombie”. If you watch the episode, you’ll get the much larger picture as to why this woman was nothing less than twisted.

If you watched the above video, you’ll realize that Walt Flanagan is truly a special man. He’s really starting to grow on me. And I’m saying this as fan of Ming’s. Walt’s quirkiness, as the adult-who-never-grew-up (much like our trusted Monsignor!) is at times priceless. In the new season’s second episode, he truly shows his boyhood colors when the original Planet of the Apes treehouse comes barking down The (Now-Not-So) Secret Stash.

This often hilarious — and informative — show is also a truly underrated show in my.. comic book. It’s proof of geeky greatness when AMC decided to stick by Kev’s merry band of misfits when they recently announced they would be doing away with any unscripted programming. But who says that Comic Book Men isn’t Smith’s best script yet?

Picking up roughly a decade after the ending of Tim Burton‘s classic film, this first issue re-introduces us to the Edward we all know and love. Still living in isolation in the mansion on top of the hill, and still as curious about life as ever, Edward finds himself stumbling into the previous inventions of his own creator– which sets up an interesting premise of Edward as creator instead of just the invention. Kim Boggs, Winona Ryder’s character from the film, has passed away and her granddaughter, whom she recounts her stories of Edward to at the end of the film, Meg, is now a teenager. Writer Kate Leth (Lumberjanes) sets up a convincing dynamic between Meg and her mother, who are at odds regarding the authenticity of the late grandma Kim’s stories and Edwards own morality. Drew Rausch’s art is a pleasure to look at, considering many panels are text less and rely solely on the art. While initially it may seem more lighthearted than the darker tone that one would expect from Edward, the art really soars on its own and is worth the price of admission itself. Unfortunately, for this issue, there wasn’t too much substance. Mid-way through I found myself almost bored with the story and just looking at the beautiful art. But, i do have faith that this book will fix those issues, because theres a lot of promise here. 3/5 Scissors.

It’s possible that Grant Morrison doesn’t actually exist. It’s might be true that he’s the creation of a fifth-dimensional imp that causes havoc on our Earth when he comes here and who is forced back to his dimension whenever he says his name backwards. It’s possible. It might be true. The concept sounds like it comes from one of Morrison’s comics; in fact, this could be the plot of the next Multiversity crossover. The man loves his ideas – and thankfully he also loves to play.

Multiversity: the Just is another chapter in Morrison’s exploration of the concepts that fascinate him: parallel worlds, killer comic books, doppelgangers, alien invasion, fashion, the differences between the ways that we see ourselves and the ways that the world sees us. But as always with Morrison this delightful book is more than the sum of its parts or its notions.

Morrison delivers an absurdist, wild, ridiculous comedy short film, with a cracking hilarious script full of awesome one-liners (“That was your big team-up with Sandman? You fell asleep and had a dream?”), stupidly hilarious scenes (Arrowette teasing her dad Green Arrow is hysterical), clever continuity call-outs (Kyle Rayner still mourning his girlfriend who was killed and left in a refrigerator) and the mystery of a suicide at its center that’s haunting and weird and full of techno-organic call-outs to us uber geeks. 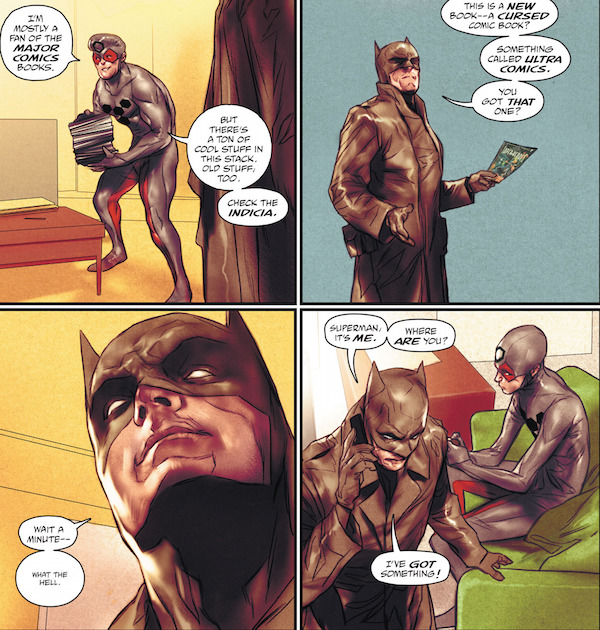 This issue is short on action but long on talk and deep thought. The Just is deliberately claustrophobic, the world of the super-heroes in this story feeling tight and clannish in a way that seems ultimately more destructive than constructive, where everyone in a costume knows everybody else in a costume way too well, and that situation leads to a world of true super-hero decadence, of wild parties and secret girlfriends hiding inside lead-lined jackets and, oh yeah, a frightening threat that appears as the issue wraps up and shows that there are consequences for the loose lifestyle.

Ben Oliver (Batwing, Action Comics) draws everything in a slick, fashion-influenced style in which the heroic characters look bold and beautiful (especially in civilian clothes) but that de-emphasizes the backgrounds. And that works because the backgrounds show the worlds of normal people, and that doesn’t matter at all.

It all amounts to a hilarious first half of a great summer action flick – the calm and character setting before the giant invasion that will happen in the second act. We’re giggling and ready, Grant. We’re ready for the action to begin. 4/5 Parallel Universes.

It also ends on an interesting cliffhanger where the Predator targets a dangerous foe from a franchise that everyone forgot. The humans –- the audience ciphers in this conflict –- are just as bland and inconsistent as they’ve been throughout this series. At least there are monsters fighting now to barely hold your interest.

While the “Fire & Stone” series has not been my cup of tea, hey– at least I enjoyed the video game more than most. 3/5 Bibles.

The Flash #35 (“Out Of Time”) pits our favorite scarlet speedster against his future self (the creatively named Future Flash), as a rip in space-time due to the Flash’s constant time traveling threatens to destroy the universe. The issue is straightforward enough, despite three versions of Barry Allen showing up (our present, wise-cracking hero, and two separate future Flashes, each from a separate timeline), and involves our Flash narrowly avoiding being sacrificed to close the rupture in space-time, and his two future selves fighting it out amongst themselves. The blue Future Flash has an interesting look, emanating blue beams of energy, and seemingly robotic in structure; alternate Future Flash, meanwhile, is a multicolored pastiche of silver, black, and red, and a pretty slick design. The art by Brett Booth (Teen Titans) is crisp and slick, a perfect example of the New 52’s egalitarian and workman-like style. Flash appears in several locations simultaneously in a few frames, showing his speed, and his suit — perhaps influenced by the popularity of Iron Man’s design — now shoots out of his insignia ring and clamps onto him, mid-sprint in a pretty cool way (whether this is a new or old feature is a bit of a mystery to me…I admit not being entirely up-to-date with Flash). Robert Venditti (X-O Manowar) and Van Jensen (Green Lantern) deftly balance multiple plot points with pretty intriguing action, and Barry himself get an amusing introduction while getting ready for his morning, and an ending that opens up some more time-traveling — and speed-negating — antics. While well-written and slickly drawn enough to be an entertaining read, “Out Of Time” just feels too workmanlike to prove too memorable (although, again, I totally dig the designs of the Future Flashes), but still manages to set up an interesting dilemma for our super speedster. 3/5 Speed Bibles.