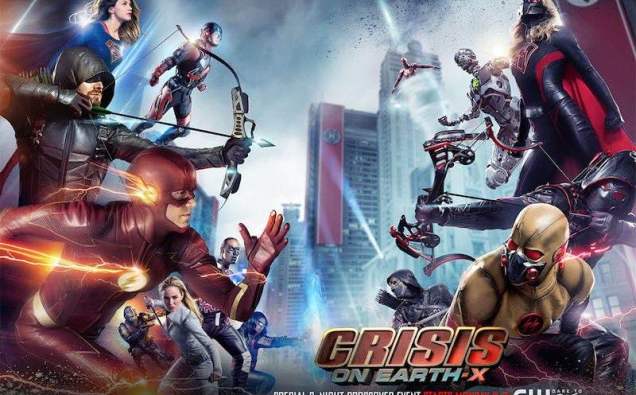 We’ve finally arrived at the hotly anticipated Arrowverse 4-part event, Crisis on Earth-X. To be clear, that choice of words isn’t coincidental. Last year we had a crossover, “Invasion”, in which each episode advanced the overarching plot, focused on characters and maintained the tone of each show, respectively. On the other hand, this is an event in the most traditionally comic booky way. These aren’t episodes of Supergirl, The Flash, Arrow and Legends of Tomorrow; this is “Crisis on Earth-X” Parts 1-4…

To top it all off, this event also begins in the most traditionally comic booky way: a superhero wedding — Iris West and Barry Allen’s wedding, that is. From Reed and Sue’s wedding in Fantastic Four Annual #3 back in 1965 to Lois and Clark in Superman: The Wedding Album in 1996 to Luke Cage and Jessica Jones in New Avengers Annual #1 in 2006, superhero weddings have been events where, inevitably, chaos ensues and this one is no different.

***Warning: from here on out there will be spoilers for this week’s episodes of Supergirl and Arrow.***

This crossover opens on Earth-X, a world ruled by Nazis, with that world’s Dark Archer, Oliver Queen, fighting and killing its Guardian, Jimmy Olsen, and getting hold of what looks to be a portal that grants him and his army access to the rest of the Multiverse. The cinematic title card is downright awesome. The episode then goes in a bizarre direction, however, with people worried about who’s RSVP’d for Barry and Iris’ wedding while far more interesting things are happening. Iris informs Barry that certain people haven’t RSVP’d while he’s in the middle of a fight with King Shark–who’s somehow managed to escape Argus–Felicity checks with Oliver about whether they should RSVP (even though he’s a groomsman) while he’s in the middle of a fight with a group of ninjas and Supergirl contemplates whether she should even show up to the wedding after a fight with a Dominator, marking their first appearance on her Earth.

Once that sequence is over, however, this event proceeds to deliver on almost everything I could want from an event like this: classic and new character interactions and fights, comedy, drama, easter eggs, shocking reveals and — most of all — heart. Because of the fact that the Legends are composed of former Flash and Arrow characters, their arrival allows us to revisit some classic relationships in new ways. I was particularly fond of Heat Wave and Killer Frost fighting together, especially considering, as Mick hilariously reminded us, he once tried to kidnap her. It’s also always nice watching Caitlin and Dr. Stein bond over Ronnie.

Then, of course, there were the new interactions, including the show-stealer Alex and Sara; these two had great chemistry together, whether it was fighting, drinking, talking or making out. Then, of course, there was the church fight scene (GHG! GHG! GHG!) — my favorite action scene that I’ve seen in the entire Arrowverse to date. Of course. There were great moments for every character including Oliver shooting one of the Dark Archer’s arrows out of mid air with an arrow of his own, Cisco opening a portal for Oliver, and Heat Wave and Killer Frost shooting some fire and Ice.

There were two standouts though: 1.) Wally West catching bullets and throwing one straight back into a gun, likely Wally’s best moment so far! This makes it all the more frustrating that after that awesomeness the writers chose to sideline him again. (The way Wally’s been treated this season has easily been the worst part of all four shows for me, but that’s a separate gripe for a separate day.) 2.) Alex and Sara, two non-powered women, mind you, teaming up to fight Prometheus. The revelation that Earth-X Prometheus is actually Earth-X’s Tommy Merlyn and the ensuing conversation between Tommy-X and Earth 1 Oliver were awesome surprises that allowed for an overdue conversation that ended with a metaphorical twist of the knife.

That brings us to Prometheus’ partners and villains of the event, the Earth X dopplegangers of Oliver and Supergirl, Dark Archer and Overgirl, and a somehow alive Earth 1 Eobard “Harrison Wells” Thawne, who we’ve seen die and get wiped from existence on two separate shows now. I really do hope that they give us a better explanation than the Savitar reasoning of “the more you time travel the less the rules apply to you.” That was cheap back then and it would be cheap to do it again now. On the other hand, the motivations for Oliver-X and Overgirl are fascinating. They don’t just want to conquer this world; they’re looking to save Overgirl from dying after having been overexposed to solar radiation.

In essence, what we’re seeing is the Nazi Supergirl’s version of All-Star Superman and it fucking rules. It’s also fascinating to see the three main heroes fighting corrupted representations of their struggles this season. Oliver has embraced his loved ones, and even has a conversation with Barry and Iris reminding them draw strength from the love they have for each other; thus, he now faces an evil Nazi version of himself who draws strength the same way. Kara has spent the season trying not to deal with the pain she’s been feeling, having masked the pain by rejecting her humanity as much as she could; here, she faces a murderous version of herself that has rejected her humanity and — yet — is now dying due to her Kryptonian physiology.

Barry has spent this season in a much brighter mood after spending some time in the speed force. The time he spent there seemed to have washed away all the pain of his past, but now he’s confronted by the Thawne that created all that pain for him in the first place. Barry and Thawne seem to be at the same point in time from the starting point of this timeline, an interesting dynamic we’ve not prevously seen between the two. With his timeline in motion and power back, Thawne’s not dependent on Barry to get back home; in turn, our Flash doesn’t have to worry about changing the past or present in this fight. Thus, this is the first time we’re able to see The Flash vs The Reverse-Flash completely unleashed.

Sure… Thanksgiving is past and X-Mas is on the way, but it’s Easter Egg time! My two fave: the absolutely hilarious Spider-Man joke, and the young woman who talks to Barry at the church, strongly implying that she knows Barry and may be from the future. Is she Dawn Allen, Barry’s daughter and half of the Tornado Twins? Or, could she be Jenni Ognats, Dawn’s daughter/Barry’s granddaughter and future member of the Legion of Super-heroes as XS. Considering there are strong signs pointing to the introduction of the Legion in Supergirl, it would be pretty awesome if one of the members is Barry’s granddaughter who goes back in time to be at her grandfather’s wedding. All of these things have combined for an incredibly strong first half to Crisis on Earth-X and I can’t wait to come back for the rest. 4.75/5 Multiversal Crises.