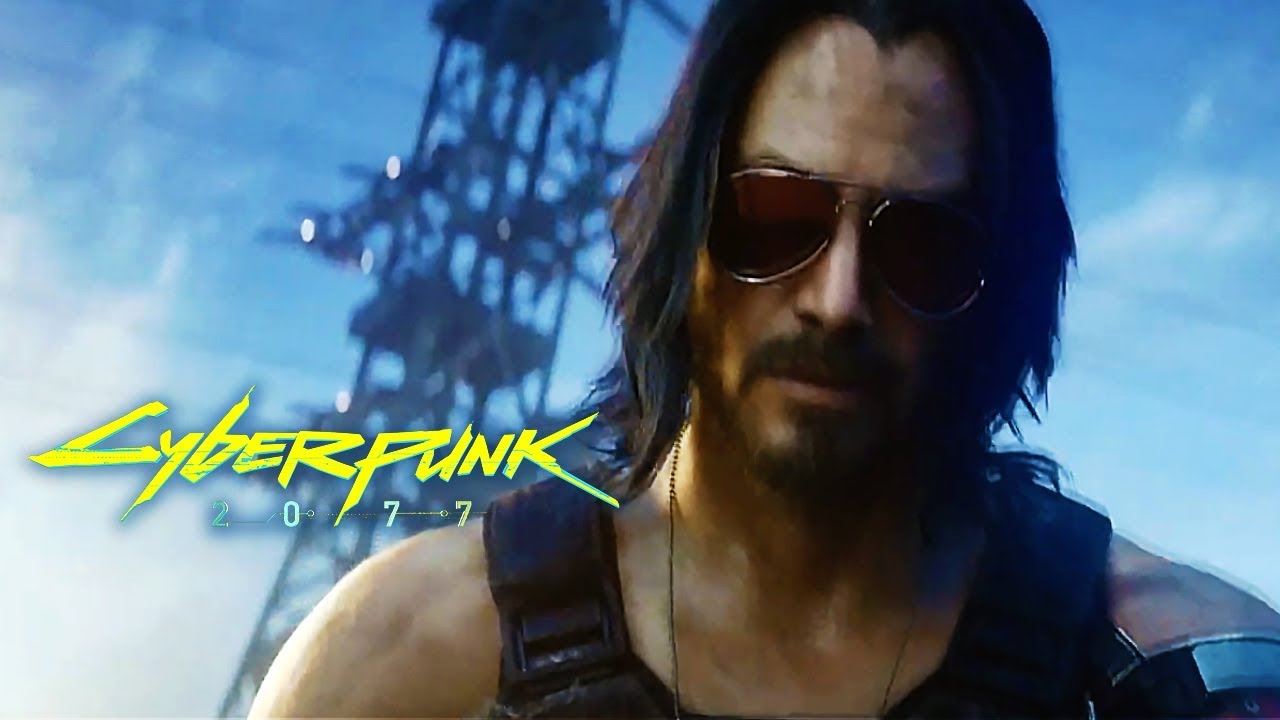 CYBERPUNK 2077 (CD Projekt RED/WBIE – X1/PS4/PC – April 16, 2020) – Keanu Reeves is the best thing about this game. That’s not to say there isn’t a whole lot to love, as Cyberpunk 2077 is easily one of the few NowGen darlings of E3 2019. But from the dark room beyond the bright yellow wall-space of CD Projekt RED’s final media appointment on day one, it’s hard to remember Reeves ever being this.. charismatic. Other than the 1990 Bill & Ted and 2003 Animatrix cartoons, who knew voice acting — especially for video games — was in Neo’s forte?

Funny, but he’s been at it for a while. There were a pair of Bill & Ted video games for Nintendo (Excellent Adventure) and Game Boy (Bogus Journey), and forgettable Matrix and Constantine games. I’ll stop right there…

In the 50-minute demo Keanu is almost as super as he was during Sunday’s Xbox E3 Briefing. I mean, he uses the term “rat’s dick”. Rat dick! But Keanu’s performance shouldn’t be any surprise since his digital ghost, Johnny Silverhand, will instantly remind fans of that other Johnny. And trust that you’ll appreciate Reeves’ coolhand banter — as your chief protagonist’s chipped-up consciousness — since other characters you come across in Cyberpunk don’t ever stop talking.

As much as I love my narrative lore and character development in games, there were a few moments in this demo where I wanted my V to leave mid convo, and he almost sorta does; players can roam during discussions. Better, the game’s dialogue choices put Mass Effect to shame, as V can often choose up to 4-5 responses. That’s deep.

Cyberpunk can also go from Cybertalk to Judgment Day in a matter of seconds. When the action got going, I definitely shouted “wow” a couple times during the demo. One particular wow moment sees V rip the giant autorifle right out of the turret, and does his best to pop the most bullets in a single video game scene ever. It’s mayhem x 1000 and I loved every second (trust me; them’s a lotta seconds).

Cyberpunk 2077 also sets players up to play however they desire, cosmetically and stylistically. This demo puts an even bigger emphasis on character customization and extremely rangy perk system (i.e. engineering, hacking, even assassinating skills, etc.). It’ll be interesting to see how many famous actors, pro ballers, wrestlers, and even YouTubers (ick) players will come up with in their creations.

On the quieter side of things, lurking around the Animal gang-ridden environments in the Pacifica portion of the map looks extremely difficult, although it’s anyone’s guess how well crafted this demo was. You know how these things work. But one of the neatest moments of stealth play was V’s use of an extended hacking wire for combat; once foes were alerted, the electric whip-like monowire was a real nifty tool.

What wasn’t so nifty was the hacking sequences, which looked no more than a tic-tac-toe grid of random numbers. Meh. At least once you hack things that’s when all the fun begins. You can go the whole game without killing anyone, but.. that would kinda suck. Cyberpunk gets real creative in the hack-game, damn funny too, as the demo shows us a jacked-up, Body By Rasta-Mahn get crushed by his own chest press routine; we also see vending machines turn into the Animals’ last two dollar bill’s worst nightmare.

While not as pretty as Doom Eternal or Ghost Recon: Breakpoint (at least not yet), Cyberpunk 2077‘s visuals certainly appear to push the current gen. There’s a whole lot going on in these vibrant environments and there are layers and layers of NPC’s and beautiful landscapes. Night City’s setting is an attractive mix of smokey pastels and bright neons; think future downtown Los Angeles meets the gutters of Mafia V‘s New Orleans during sunset; Netflix’s Altered Carbon at night. Once our hosts snatch up a Japanese crotch rocket — the Yaibi Kuzanaki — and take it around for a spin, radio stations are flipped ala GTA to suitably aggressive tunes. You’ll ride for a while too, through remarkable haunts like rundown cinemas and malls only minus the zombies.

While this year’s 50-minute demo didn’t offer the same electricity in the room as it did at E3 2018, the high tech-based game definitely finished up in the surprisingly mystical. Throw in the reveal of a mysterious Cyberspace and darling Keanu Reeves in our robust role-playing consciousness, and Cyberpunk 2077 is still in the handful of frontrunners for 2020 GOTY. 4.25/5 Bibles.