Image Comics’ newest title, Thumbs, is one of the more visually  interesting new releases in the coming weeks, and has plenty of potential to mine. Utilizing a very basic color palette (shades of gray with varying degrees of magentas and reds), the art is the main selling point here, as it feels like it might veer into treading some well-trodden ground.

Set in a near-apocalyptic (or, at the very least, slightly more authoritarian than we find ourselves now), technologically-ingrained future, Thumbs focuses on the title character, Charley “Thumbs” Fellows, and his friend/compatriot, Nia, as they take part in a virtual-reality-enhanced resistance against an oppressive paramilitary force. When we’re introduced to Thumbs, he’s already been knocked unconscious by a grenade, and through flashback we see a bit of the life he’d lived. 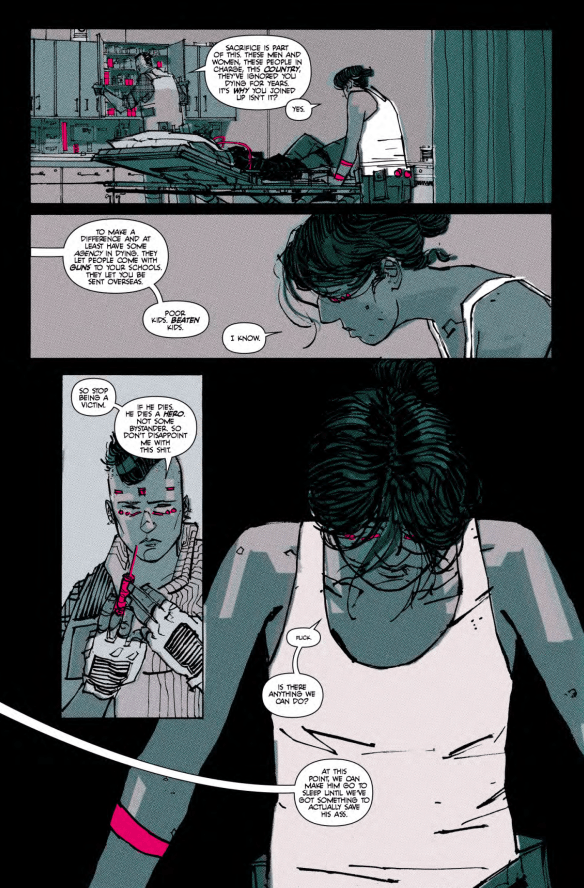 While the future, post-apocalypse setting felt slightly blase, and the most interesting and meaningful scenes involved Thumbs and his sister Tabitha prior to his being injured. Here, in a coma-induced flashback, we learn that both Thumbs and Nia had been the benefactors of a billionaire philanthropist/tech guru who believed that providing the poor and underprivileged with free technology would ease their woes. They receive an implant-like device called a Mother, and with it enter an LARP-like tournament, a sort-of real-life Call Of Duty.

What begins as just a tournament soon turns into a race against military forces, who have arrived to crack down on users of Mother…for reasons we have yet to discover. Realizing that the video game which they’d been playing seems to be a real-life training exercise, one that seems to have nefarious aims, Thumbs and Nia are soon ensconced with similar Mother users, an entire army resisting against…again, something we have yet to uncover. 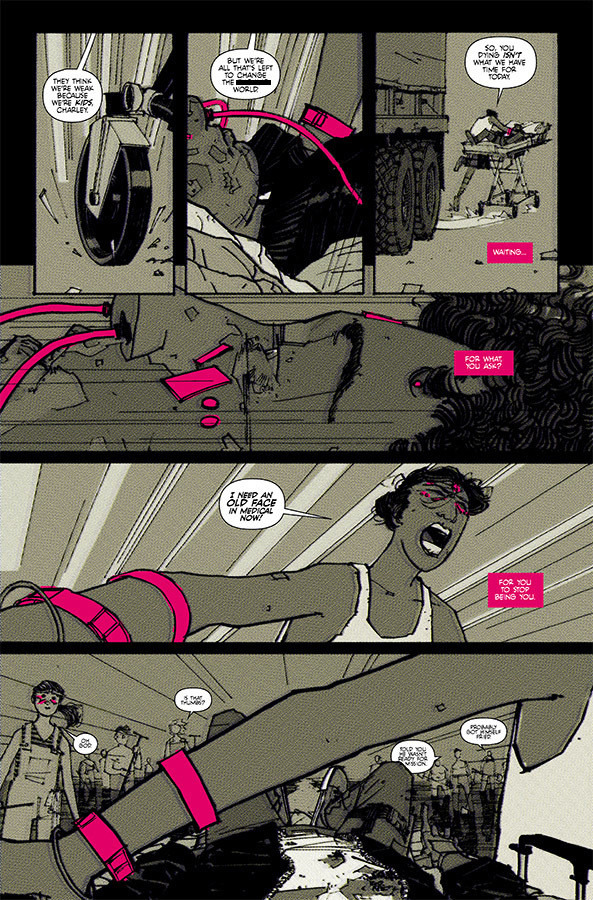 The art by Hayden Sherman is unique enough to be quite exciting: a dual-color palette actually works well here, and the design of the world itself not the run-of-the-mill post-apocalypse, but one that is maybe a day or two away from total collapse. The world is just this side of totalitarian, and the idea of a Mark Zuckerberg-type figure using apps and technology to create a personal army is not only interesting, but scarily prescient. Writer Sean Lewis sets up a lot of backstory and character development during the flashback, and never once does it ever feels like exposition.

Thumbs is an interesting book, but if you miss it, there doesn’t seem to be anything (yet) that makes it a Must Read. It has hints of Ender’s Game, along with a more original Ready Player One. The art is what sells it for me, but another issue or two might be needed to see if this is essential. 3.75/5 Bibles.