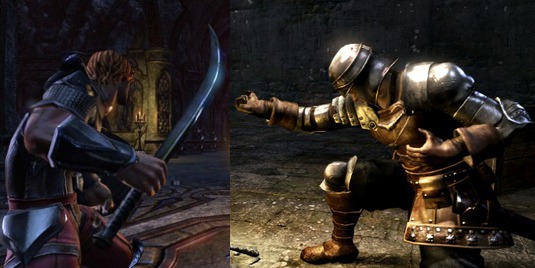 …the “Go kill me six of these monsters” quests that have haunted MMO’s for years. Fortunately, the epic quests of the Elder Scrolls series are there as well. There were main story line quests that had multiple parts and locations that were excellently designed and implemented. Guild quests also return to the series, allowing you a break from the main storyline to get better loot and XP without having to “kill six monsters.”

Getting to link up with a friend and explore together was great. When you join a party, you can simply teleport to the party leader with the click of a button. This lets you get to questing from the get go, saving you time and frustration when you try to link up and have to walk for fifteen minutes just to get to your buddy. Loot is also unique for every person. If you help kill a creature, it’s not first come first serve for the loot it drops. You, your friend, his cousin and your mom can all get loot off the same body if you helped kill it. This can help stem off arguments and keeps away that stupid “dice roll” for loot that usually occurs in an MMO.

Character development in ESO is unique for an MMO. The class you choose only determines what magic you get to use. As far as equipment goes, if you can pick it up you can use it. This means you can be a mage in full plate armor, an assassin that uses a great sword or a knight toting around a little dagger. When you level up you still throw a point on magic, health or stamina but you also get to add a point to a spell ability. This leads to a limitless character development cycle. In other words, if you see an elf in full plate with a fire staff don’t think he can’t still enter stealth, disappear and then backstab yo ass!

All in all, this game is amazing. Even with the bugs that players of the beta had to deal with (IT’S A BETA!!! STOP WHINING!!!), this game far surpassed any other MMO this Templar Knight has ever crusaded through. With three different factions, over a dozen gigantic “lands” to explore and multiple character play styles this game is going to be EPIC! If you plan on picking up ESO, get your affairs in order because you’re going to get lost in this game. With all the room for expansions added in with everything else ESO has to offer, I foresee a new king of the MMO genre.

Bethesda’s Elder Scrolls Online will release on PC on April 4, and sometime in June for PS4, Xbox One and Mac.