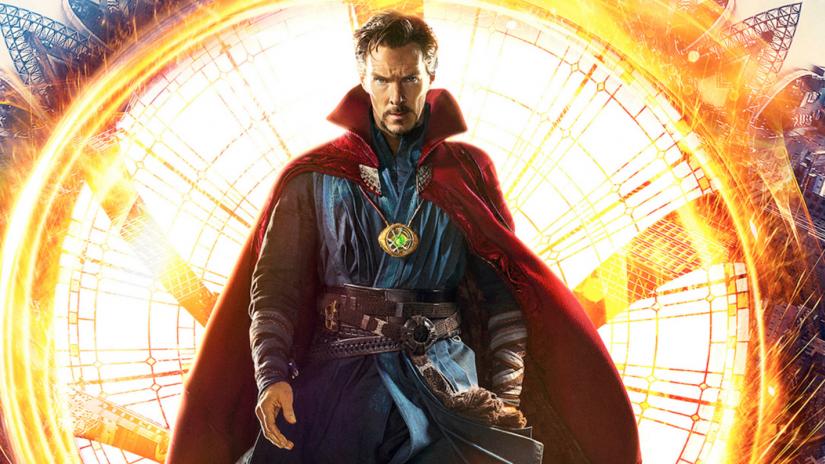 Neurosurgeon Dr. Stephen Strange (Benedict Cumberbatch) is not only confident in his surgical abilities, but also overly egotistical, unbearably cocky, and takes the opportunity to gloat any chance that he gets. But Stephen loses the steady dexterity he’s come to rely on for surgery after a devastating car accident and finds himself at a depressing crossroads when his hands still tremble and ache after seven grueling procedures that also leave Stephen without a penny to his name.

With his career as a doctor at stake, a desperate Strange discovers that a man named Jonathan Pangborn (Benjamin Bratt) who lost the use of his legs can now walk and function as if his injury never happened. Pangborn points Strange to Kamar-Taj in Kathmandu, India and claims that if someone can elevate their mind and spirit, then their body heals. Stephen is discovered by a sorcerer named Mordo (Chiwetel Ejiofor) who takes him to The Ancient One (Tilda Swinton) where she introduces Stephen to the mystic arts, the astral plane, as well as a small sampling of the vast number of dimensions available in the universe. As Stephen begs for tutelage from The Ancient One, her former pupil Kaecilius (Mads Mikkelsen) seeks eternal life from the powerful being known as Dormammu.

This is the first film in the Marvel Cinematic Universe to introduce the mystic arts. In a way, this means that Doctor Strange feels just like the other Marvel films in the sense that the fate of the world rests on the shoulders of an unlikely hero. The difference is that this is the first time the audience has been given a glimpse of what else is out there. With the exception of maybe Guardians of the Galaxy being the first to explore the power cosmic and the Thor films revealing that other worlds are out there, the majority of the threats in the MCU have revolved around either an otherworldly threat coming to earth or a homegrown villain developing a thirst for power.

As The Ancient One tells Strange to, “Open his mind,” before catapulting the skeptical doctor through a dozen different dimensions, the audience is also thrust with their balls out, feet dangling above their head, and without any sort of protection into a flashy, vibrant, reality altering, and sometimes terrifying free fall just like Stephen into unbelievable realms we’ve never experienced before. The film describes magic as the ability to draw energy from other dimensions, which results in the colorfully complex diagrams coming to life that you’ve seen in the trailers. But there’s this mind-bending element to it that typically takes place in the Mirror Dimension where the architecture of buildings are expanded, modified, and bent like pretzels before the very landscape of the entire city follows suit. Imagine Relativity by M. C. Escher being intertwined with the five levels of Inception over and over again and you have a vague idea of the kaleidoscopic visual effects featured in the film.

With a screenplay by Jon Spaihts (Prometheus), director Scott Derrickson (Sinister), and C. Robert Cargill (co-writer of the Sinister films), Doctor Strange accomplishes a proper introduction to the mystic arts. The point the film is trying to get across is that while The Avengers tackle the physical threats that may risk the fate of the earth there are mystical ones that sorcerers must defend. There are three big special effects sequences: the first confrontation between Stephen and The Ancient One, the battle within the Mirror Dimension, and the unbelievable time-warping melee between Kaecilius and Doctor Strange that closes the film. Each sequence seems to be attempting to outdo the last, but as a whole the special effects are so impressive and unique in comparison to what you’ve seen thus far from the other Marvel films.

The unfortunate aspect is that some twists and turns in the storyline are easily decipherable. Certain character arcs are foreseeable as soon as the characters are introduced. Characters such as Christine Palmer (Rachel McAdams) and Dr. Nicodemus West (Michael Stuhlbarg) seem like nothing more than filler. Mikkelsen and Swinton give these quiet and restrained performances that only make you lust for something Hannibal, Casino Royale, Constantine, or We Need to Talk About Kevin related. Chiwetel Ejiofor has the most to work with of the supporting cast, but it’s just a tease since the real meat and potatoes for Mordo won’t come until we see the character again. The entire brawl within the astral plane seems like homage to Peter Jackson’s The Frighteners, which felt deliberate based on Derrickson’s horror roots. The ending is also a bit weaker than was probably intended. After the dust settles everything seems to fizzle out. You know Avengers: Infinity War is on the horizon and Doctor Strange will be seen again, but the film lacks a proper conclusion. The film basically folds in on itself before fading into the end credits with Strange walking away dramatically as his sentient cape bear hugs him.

As far as performances go, Cumberbatch is kind of a dick in the film. His arrogance is overwhelming as his witty quips and clever tangents aren’t nearly as humorous as he thinks they are. Stephen Strange’s attitude and behavior factor into how the character evolves over the course of the film. Cumberbatch adds a layer of relatability and tenderness in his portrayal of the sorcerer supreme. Stephen basically has to lose everything in order to gain limited knowledge of something he never knew existed six months prior. Strange embraces his status as a loser, which factors into the tactics utilized to counter Kaecilius.

Visually, Doctor Strange is a hallucinatory wet dream. Absolutely experience the film in IMAX to fully appreciate just how mind-blowing the visuals are and be sure to stay through the end credits for two brief but entertaining scenes. The somewhat clunky storyline sours the plunge into Marvel’s first all-out supernatural feature. It feels like diving head first into a shallow pool; the descent is exhilarating but the abrupt ending cuts you off before you can finish stroking that massive comic-fueled, fanboy-triggered chubbie. Like the character in the film, Doctor Strange offers a spellbinding exploration of what lies beyond the stars but lacks the proper mastery of the mystical concepts it introduces.  3.5/5 Sorcerer Supremes