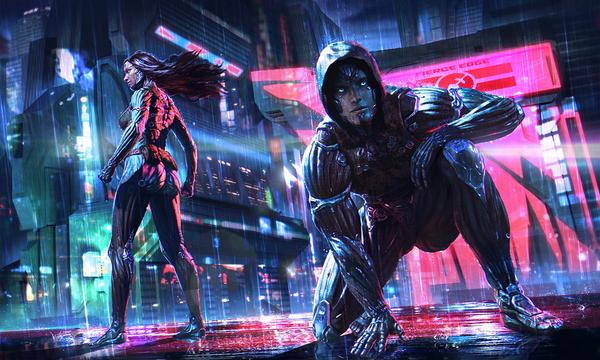 CYBERPUNK 2077 (CD Projekt Red – PS4, X1, PC – TBA) – After years of speculation and anticipation, fans of CD Projekt Red will finally exhale with excitement as they prepare to launch into (what appears to be) a lengthy marketing campaign for their newest single player game, Cyberpunk 2077, at E3 2018. As a hardcore fan of the company’s last title — and many publications’ Game of the Year — The Witcher 3: The Wild Hunt, my expectations are set high and this Dutchess can’t help but compare my experience with The Wild Hunt to the upcoming highly under wraps role playing game. The release of Witcher 3 further progressed the company’s development of their REDengine software platform with a REDengine 3 debut that allowed for better detailed facial animations, higher resolutions for texture, mapping and advanced dialogue lip syncing in the open world driven fantasy realm.

There hasn’t been much, except lots of speculation, about Cyberpunk 2077 since its development was announced in 2012. We know that it’s had some creative hiccups, and has dealt with thievery and ransom. Hell, the Polish government help fund $7 million to its development; the game is based on the tabletop game Cyberpunk2020 and has kept its creator Mike Pondsmith, involved as a consultant. But most importantly is that CDPR has once again updated their gaming engine technology and will be releasing CP2077 on their REDengine 4.

And here’s where I start to get excited: the technology, details, passion and genius that goes into every CDPR gaming engine continues to blow gamers away. The game, set in the open world metropolis Night City, California features non-English-speaking characters. Players who do not speak the other languages will be given the option to buy translator implants for their character to better comprehend the alien languages. WHAT??? And with even more detail; depending on the advancement of the implants, the quality of translations will vary, with more expensive implants rendering more accurate translations. (So anything could go wrong in space!)

This “Braindance”, a digital recording device streamed directly into the brain, allows the player character to experience the emotions, brain processes and muscle movements of another person as though they were their own. This is truly an incredible design to totally submerse the gamer into the world of 2077, something that CDPR has made a name for themselves doing. And much like The Witcher, there will be different endings based on player agency and choice. With all this and a growing team of talented artists creating the beautiful landscape and worlds, it’s no wonder there’s an enormous amount of hype and anticipation for Cyberpunk 2077, which could easily steal the show at E3.