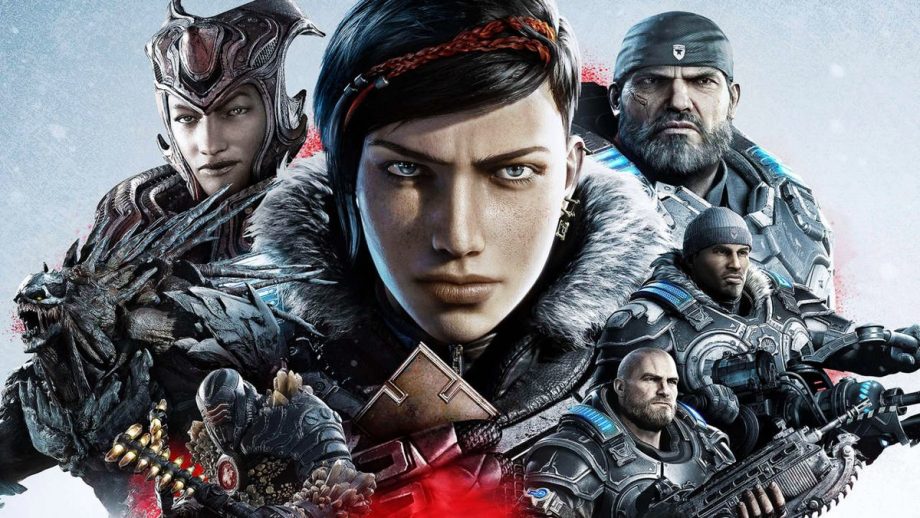 One of pillars in the Xbox gaming brand is back. But is this testostorone-filled cover-based shooter still relevant? Or is it too little, too late? The answer is no– Gears 5 is exactly what the doctor ordered for Microsoft and the Xbox fans.

The fifth game of the heralded franchise sees Marcus Fenix, his son JD and former “Outsider” Kait Diaz back in the fold from GoW4, chainsawing Locust ass and taking ugly alien mother-F’n names. But in Gears 5, we’re mostly in the role of Kait who’s still struggling with the dramatic loss of her mother and battling with her own inner demons. JD and Marcus are a big part of that story, but they’re no longer the center of attention. We’ve gone through personal dramas and Locust hell with Marcus since 2006, so switching over to a different story arc only adds more meat to the bone of the Gears saga. And it feels less cheesy, adding a bit more serious tone than before. But don’t worry, it’s still Gears with soldiers looking like beefed-up WWE wrestlers (hence Dave “Drax Batista” Bautista arriving as DLC). It’s just done better than before…

Also new to Gears 5 is the support drone Jack. Imagine R2-D2 equipped like a high-tech Swiss army knife, full of useful and fun tools that can be upgraded. Jack can hook you up with cloaking, shield, stuns, remote controlling enemies and much, much more. As if that wasn’t enough, he’s a playable character in co-op and adds a completly new gameplay layer to Gears. Jack is sort of an OP (overpowering) support character, if there ever was such a term.

The presentation of Gears 5 screams AAA in every aspect. The visual presentation is a rare treat, pushing the Unreal 4 engine on Xbox One X to its limits, displayed in dynamic 4K/60 FPS– not very common on current gen consoles.
What The Coalition has achieved here is nothing but remarkable; Gears 5 runs and looks amazing. This is arguably the most interesting take on the Gears universe yet with so many exciting environments to explore, from snowy woodlands, Mars-like deserts to wartorn cities. And the best part, you can use the Skiff to slide around on ice/snow/sand while looking for rewarding sidemissions. Trust me, go explore. Jack will thank you later.

Gears 5 manages to surpass its predecessors, improving on almost everything that has been done in the previous Gears games. But it’s not a perfect game though, as things like going in and out of cover can still be a pain in the ass. There’s other games out there that copied this cover system and improved on it, so going forward I hope this improves in the (yes, it’s fuckin’ happening) Xbox Scarlett Gears 6 sequel.

The game also struggled from time to time when playing co-op online, with issues like falling/glitching out of the map, checkpoint saves, a few pestering disconnects, etc. While I expect this to all be tidily patched up very soon, it was annoying enough to taint my overall high impression of the game as it stands right now. 4.25/5 Bibles.

Diving right into Gears 5 multiplayer, let’s start with the newcomer: Escape mode. It’s essentially you, two squadmates, a poison bomb, and a countdown that lets you know it’s time to GTFO.

The tense setting is enhanced by the fact that you’re surrounded by enemies everywhere and start out just with a sidearm (no full loadout like the other modes), and praying that your teammates not only are competent, but stick around. In what I consider an oversight if someone leaves, there is no AI sub. It can come down to you vs all. This is a mind-boggling oversight…

Thankfully, the newly introduced signature abilities can help you when facing these — let’s be clear, fucked — odds despite best used in conjuction with solid teamwork. The best piece of advice I can give for Escape mode is to go in with a squad you know won’t quit.

Speaking of solid teamwork working in conjuction with the new abilities.. Oh, yes– one of my favorite MP modes in gaming is back and with improvements: Horde mode. To the uninitiated: You and 4 others vs 50 waves of the unrelenting Locust, trippy AI and the like. Each wave gets harder. To longtime fans: The Coalition just keep improving the mode, with more enemy variety than ever before. For the first time ever, as Danny mentioned above, there’s a full support hero. The oddly loveable robot is playable for the first time. Don’t be surprised if Jack becomes your main. Using him is a completely separate experience and can often change the tide of battle even when you’re the last bot floating.

The new abilities help a ton, specially past level 20. Fahz’ X-Ray vision/shoot through walls, Marcus’ auto headshots, Kait’s invisibility, etc.. They’re all unique and can often devastate a Horde wave if used properly in tandem. To add even more strategy, each character can be leveled up to unlock skill cards that can be equipped (score multipliers, extra mag sizes, damage modifiers, etc). For the recent breed of gamers that circlejerk each other because they play frustrating games, you can ramp up Horde mode with all difficulty modifiers turned on right off the bat. I’ve tried it… It is rough. Enjoy!

As for the single player campaign, MP was my focus for the review, and my fellow clergymen covered it perfectly. That said, I absolutely love the story. The new sense of scope and the change of central character brings a new, fresh point of view while delving into the mystery that Gears of War 4 presented us in its bombshell cliffhanger. As a whole, Gears is back and never better. 5/5 Blood-Drenched Chainsaw.

Due to other professional obligations, Travis Moody will have his full thoughts on Gears 5 on the next Geekdom Gamescast. Stay tuned.