The CONGREGATION OF COOL IS NOW IN SESSION… and the recipe for your salvation is a punch to the head. So here’s a big, balled-up, bloody-knuckled FISTFUL OF COMICS!

NAVIGATE THE PERILS of another Chitauri invasion of NYC with RYAN FORD!

DISAPPEAR INTO THE APPARITION of HaloGen with JIMMY CUPP!

Do double time and HIT ALL THE TARGETS with an all new Hawkeye, entitled All-New Hawkeye, with marksman, MATTHEW MCGRATH! and THEN —

RETURN TO THE DEPTHS of Descender with your two-time comics tour guide, MATTHEW MCGRATH!

Also, if you’re not too tired, MASTER BLACK SCIENCE with me, black scientist, but not, like, all-the-way black, JOE TOWER!

If a comic episode was ever inspired by the work of Cyndi Lauper, it’d be this. Guardians Team-Up 001 felt like “Girls Just Wanna Have Fun” mashed with “The Goonies ‘R’ Good Enough.”

Allow me, the Reverend Ford, to pontificate: Guardians = Goonies in space. The Avengers are dominated by intensely powerful female personalities, some of whom are on loan to the Guardians. And with the plot lines following the influence of said femme fatales, well… It makes sense to me. Anyway, on to the issue itself. 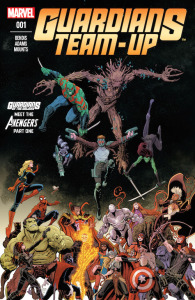 Brian M. Bendis (Powers, The New Avengers) has yet to craft a script of mediocrity, at least in recent memory, and delivers once more with a multi-faceted approach. For the casual fan, or those eager to pick up a book thanks to the success of Marvel Studios feature films, Bendis drops the reader into a familiar setting. New York city is once again under siege by the Chitauri, though their master (revealed at the end) is intent on destroying Star-Lord and his crew instead of enslaving humanity. New York is protected by The Avengers, so they join the fight.

Where it gets a little tricky is the ever changing roster of The Avengers, not mention the posse of space cowboys. The only mainstays from the movie – for casual fans – are Hawkeye and Black Widow. Otherwise, Venom and Captain Marvel are Guardians. Captain America is Falcon. Thor’s a chick. But with a few tongue-in-cheek repartees – like Rocket’s quip about the design flaw in Spider-Woman’s suit – readers are quickly assimilated into the action-packed thrill ride that is sure to play out in epic fashion over the run of the series.

The artwork by penciller Art Adams (Classic X-Men, Secret Avengers) and colorist Paul Mounts (Fantastic Four, Wolverine) jumped around a couple different styles, which I found interesting, though sometimes it took me out of the story. Case-in-point, the combined palate shifts from retro ‘70s stylings, to a gritty, Todd McFarlane-esque tone, to the “Hidden Pictures” section of Highlights Magazine, made me feel like I was reading a Magic Eye poster. Needless to say, I found myself looking around the page more than paying attention to what was going on.

All summed up, it’s a solid opening entry to the series, but nothing ground-breaking or spectacular by the “Ultimate” standards of today. 3.5/5 Bibles

Welcome to CityshipQ everyone, a double-sided disc with sister cities on either side, floating in the middle of outer space. Writer Josh Tierney (The Spira Series) gives us a decent introduction to what appears to be the beginning of a Tomb Raider-in-space type of series, only big corporations are afoot whose exact purposes remain a mystery.

We meet Rell, our bad-ass heroine, who has the ability to create realistic holograms using the help of a “holosuit.” Her ability is beyond that of most people’s, and because of this she is being studied by a company called HaloGen to help further these abilities. Then, she is tasked with a mission to find the body of Det’houva, an ancient god who died shortly after creation.

This first book is a little slow, but seems to be setting up some good action to come. The characters are fun and original. Afu Chan’s (The Spera Series) art is child-like, but somehow seems to fit the story perfectly. I think Tierney gives us a great introduction to a new series that will be fun, campy, and exciting without being overtly sexual and derogatory. Not to mention there is a kick-ass robot assassin who is cryptic as all Hell, and I’m certain we will see more of her. So I’ll keep reading it for sure. 3.5/5 HoloBibles 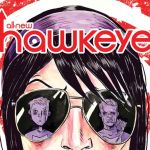 This all new Hawkeye opens on a flashback to his childhood. We see the distant memory through murky lavender-hued watercolor-style illustrations. What seems like a pleasant childhood memory is tainted with hints of tension: foster homes and a fear of forgetting chores because of a mysterious “Him.” Then, the transition to the present is jarring, however. The dynamic watercolors of the past become hard, flat cartoons. What was alive is now dead.

The story opens on Clint and Kate Bishop (the third Hawkeye) racing through a Hydra base. The mission is going sour. As the situation becomes more desperate, the past and the present begin to merge until the the past mirrors the present on the final splash page, as if looking at a reflection through water. Jeff Lemire‘s (Justice League United, Animal Man) and Ramon Perez (The Amazing Spiderman, Kings Watch) are credited as “storytellers,” without a distinction of who wrote the words and who did the pencil.

The story and the plot are basic. Many books have the words driving the story. Here, the balance is skewed to the art. The book should be read on that basis alone. 4.5/5 Arrowheads

Okay, so my big fear is coming to life: that I’m the guy who doesn’t like anything. The old curmudgeon who doesn’t understand what the kids are up to these days. 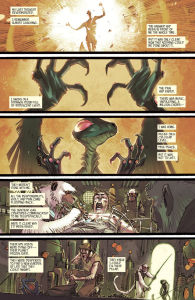 This book – neigh, this ISSUE – it’s pretty good. And I think what I like about it is the thing I never thought I’d like about contemporary comics. It takes itself SERIOUS. Like, real serious. We live in an age – of TV, of film, of literature – that somehow thinks it’s earned the right to laugh at itself; at its own form. But some of my favorite shit ever in the world is the shit that took itself SO seriously, that we as audience members might be tempted to laugh at it.

Black Science is written by Rick Remender (Uncanny X-Force, Captain America), who’s known for his work with Marvel and Image, and for his creator-owned series Low, which if you haven’t checked out, I recommend.

The drawback for me here was simply too much backstory. Now, I don’t mind getting thrown into to a long-away world, both in terms of time and space; an epic story chronicling the survival of alien races, of power shifts; an arc of dynamic characters desperate trying to harness technology that doesn’t abide by rules. No, I don’t mind having a SENSE of story, you understand? But I think, ultimately, this series here might hinge on its details.

Take my recommendation, and buy the issue for the dense prologue and quick ignition. To delight in the specificity of really responsible sci-fi world-building. Or for Matteo Scalera (Deadpool, Valen the Outcast) and Moreno Dinisio‘s (Dead Body Road, Resurrectionists) splashy, almost whimsical, messy and frenetic panels. But if you’re going to GET INTO it, I’d say buy the farm. Go back. Re-read. Get into it. Eat it up. 4/5 bibles 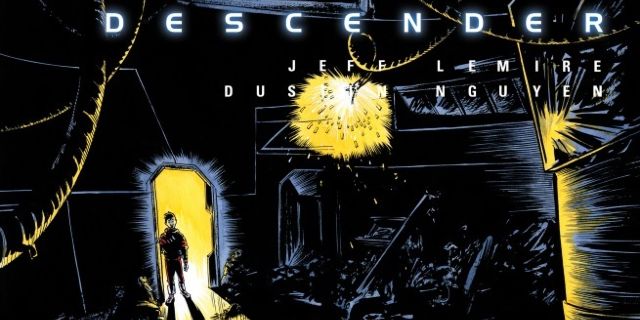 Jeff Lemire‘s (Justice League United, All-New Hawkeye— just up above) story obviously borrows from a lot. None of the plot and setting is new, so far. The story follows a boy named Tim, who wakes up after 10 years on a mining colony in which all the people have died from a gas leak. Meanwhile, back on Niyata, the former capital planet, a former advanced roboticist is being questioned about his artificial intelligence work in the wake of a devastating attack on the core worlds.

The pacing of the story is a bit off. There’s a reveal that comes too soon, in my opinion in the first issue, which makes the splash page fall flat. Dustin Nguyen’s (Wildcats, Streets of Gotham) illusions are rough pencils with watercolor-style highlights (Lemire’s All-New Hawkeye #1 also used watercolors to great effect.) The style here makes the panels come alive. People look soft and warm. The metal looks cold and hard. The reader’s focus is drawn immediately to the color. The story is not original enough to demand waiting for it monthly, but picking it up as a trade paperback would be worth it. 4/5 robot vacuum cleaners