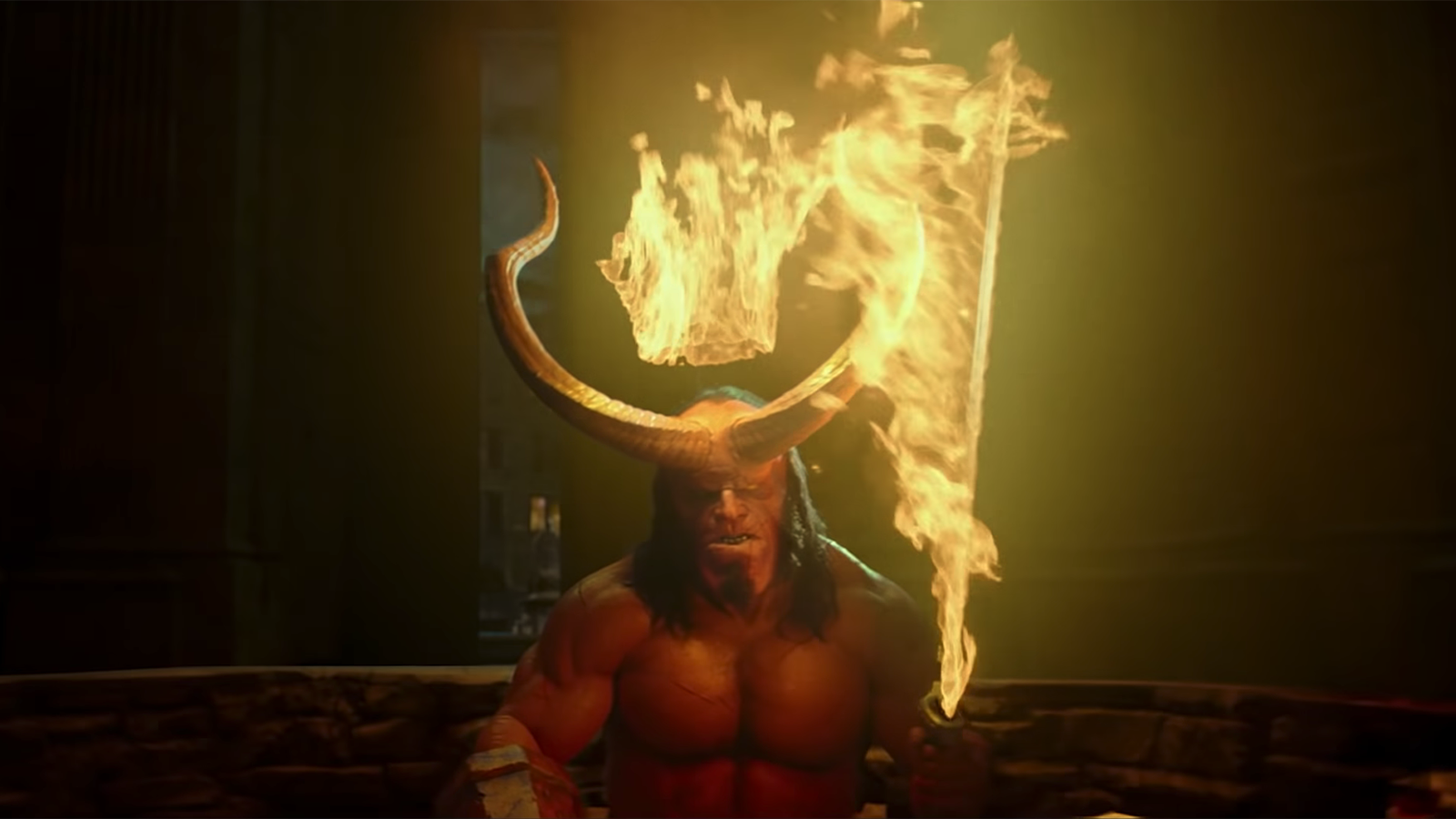 Fair warning, I’m going to spoil the shit out of the end credit sequences at the end of this review. I’m assuming most of you won’t see this anyway, so read at your own risk.

Hellboy isn’t quite as bad as its scathing reputation. It’s being compared to Venom, which is warranted. But Venom at least has that insane restaurant sequence, that weird 90s cheese, and a retro kind of atmosphere that was memorable for all the wrong reasons. You walk away from Hellboy feeling empty since its content is forgettable as soon as your eyes make the transition from dark to light upon leaving the theater.

Some reviews are calling Hellboy the worst superhero movie ever, but it doesn’t deserve that much credit. Firstly, it was meant to capitalize on the horror aspects of the original comic books rather than the superhero elements we’ve come to expect from comic book films. Director Neil Marshall (Dog Soldiers, The Descent) and screenwriter Andrew Cosby (creator of SyFy’s Eureka) are purposely going for a darker tone with an arsenal of profanity, bloodshed, and severed limbs at their disposal. Hellboy delivers on an R-rated level, but it’s as if they forgot everything else along the way like charisma from your main actor and long-winded ramblings that take precedence over anything that would be remotely entertaining.

Hellboy waits approximately five seconds before throwing a severed head and its first of many F-bombs in your lap once it begins. King Arthur beheads Nimue (Milla Jovovich), also known as The Blood Queen, with Excalibur in 517 A.D. before chopping her up into separate pieces (arms, legs, torso, and head) and scatters the remains across various parts of the globe. The reboot deals with Nimue becoming whole again and gaining revenge after 1500 years. If Hellboy (David Harbour) wields Excalibur, he can defeat Nimue, but he’ll jump-start the apocalypse at the same time.

The creature designs are visually the best part of Hellboy. Gruagach is ugly for a fairy, but fantastically designed for a human-sized talking warthog. The lucha libre bat known as Camazotz opens the film in a rather ridiculous manner. Monsters are generally the source of all the bloodshed in the film. Remember the skin rip Pyramid Head executed from Silent Hill? Imagine that level of intensity every time a monster shows up. Heads fly, arms are ripped off, tongues are clawed out and eaten, eyeballs consistently dangle out of their sockets, and people are torn in half by their legs as their mushy insides eject from their undercarriage.

The film is fucking ugly to look at though. When the film jumps to the present day in Tijuana near the beginning of the film and you see Camazotz for the first time, the special effects immediately feel dated. It’s reminiscent of the 2004 Van Helsing film starring Hugh Jackman and it seems as though they’re creating CGI with technology that’s 15 years old. When Hellboy fights three giants, it is this awkward mix of green screen and hobbling around in real life. The blood and eyeball gouging may be nice, but everything else is as hideous as Hellboy’s man bun which grows all the way down his spine and is probably some sort of eternal punishment in itself.

David Harbour’s Hellboy is a mess. He can literally show no sort of emotion in the Hellboy makeup. He has no enthusiasm with any of his dialogue and his jokes never land. His crimson face is like the poster child for roadkill and used heroin needles. He looks best with the long horns, flaming sword at his side, and a floating crown of fire above his head. But he never speaks in those scenes, which is the main reason it works so well.

Hellboy bitches constantly in this reboot and yells and throws tantrums whenever he can. He’s unlikable and you find yourself rooting for Gruagach (voiced by Graham with a physical performance by Douglas Tait) since Stephen Graham at least gives the grotesque pig-like creature some sort of character with his minimal amount of screen time. This version of Hellboy doesn’t know how to balance sarcasm and humor properly. He’s overflowing with bitter cynicism, but he’s just an obnoxious asshole who can’t operate smartphones or elevators properly.

Hellboy doesn’t feel like a totally god awful experience. Its biggest flaw is that it’s just flat out boring for nearly two hours straight. The cast mostly falls flat with their performances, the music is this weird blend of copyrighted songs and generic rock music, and the story is written in a way that prioritizes talking about shit to redundant lengths rather than providing something amusing for its audience. The uncensored visuals seem to accidentally be great at times, but it isn’t enough to allow this version of Hellboy to replace what Guillermo del Toro accomplished with two films and Ron Perlman in the same role.

The end credits to Hellboy are unbearably long; the only thing worse than a mediocre film is sitting through its never ending credits. There is a mid-credits sequence, which sees a drunken Hellboy at his father’s grave interact with Thomas Haden Church’s Lobster Johnson. Harbour exclaims, “I LOVE YOU, LOBSTER JOHNSON!” in the hokiest and corniest way imaginable to end the scene.

After the rest of the credits, which last a literal fucking eternity, Baba Yaga speaks with someone who is never shown. Hellboy makes a deal with her in the film where he promises her his eye, but he chooses to keep it for the time being since he’s still using it and they never specified a when. Baba wants his eye and she’s willing to provide this mystery man his deepest desire if he’s able to get it; his death. The internet is claiming this is Koschei The Deathless. Koschei is a slave of Baba Yaga who is immune to death. Baba is in possession of his soul and only she has the power to release it and give Koschei the sweet embrace of death. 2.5/5 Man Bun Repellent Bibles.