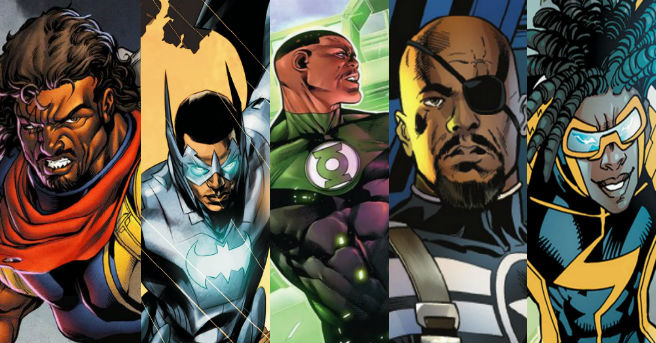 Hello, Ladies and Gentlemen. The Belser is here and hoping this message meets you all in good spirits. This past week has been an unprecedented set of circumstances in the history of our country. A black man named George Floyd was murdered by four policemen in Minneapolis, Minnesota on May 25th 2020.

In a country that has already been struck and down by the the heinous worldwide effects of COVID-19, this act lit the spark on a powder keg in that country the likes of which we haven’t seen since the Civil Rights Movement of the 1960’s, with  protests throughout the world of people united screaming ‘Black Lives Matter‘ to those in power.

These are tumultuous times and I feel it is the responsibility of each of us to do what we can to uplift the spirits of our fellow brethren. I am not a politician and a  public figure. I am merely a black man who loves writing about comic books and movies and TV and such. So I figured it would be best for me to use what skills I have at my disposal to  not only entertain but educate. The topic I’ve chosen to express that sentiment? An in-depth look at Black Superheroes…

HEROES OF OUR OWN

Of course, everyone on Earth knows who Spider-Man, Batman,  Iron Man and Superman and all these other characters are. Despite their different power sets, skills and costumes, they all have one thing in common: they are all predominantly white. It’s no surprise, as they were created by white men for the consumption of white children. However,  their popularity also went on to garner the attention of young black children. As time passed, these same kids –like myself– always longed to see a superhero that look like them. A superhero that has been where they’ve been, seen what they have seen and talks the way they talk.

As a kid I always longed for representation on the comic book page. While there have been instances to where that has come true, in terms of the mainstream media, however, seeing those characters come to screen took much longer than their white cohorts. Case in point, the Black Panther movie was first initiated in 1992 and didn’t get to me until 2019. I remember specifically one article in which some Marvel executives stated that the idea of Wakanda (an African kingdom that is unconquered by the white man) was ‘too far-fetched’ for cinema audiences to accept. Meanwhile,  we as audiences had just seen them render the magical kingdom of Asgard or a space movie with a talking raccoon…

You see a lot of instances where the black hero is a sidekick to the white hero. More often, the black hero is, at times, a replacement in case the white hero is injured only to promptly give up that title once the white hero has recovered. You have seen it with Iron Man (Jim Rhodes), Green Lantern (John Stewart), and Captain America (Sam Wilson). Thankfully, society has evolved enough to which each of those heroes have made their own mark in the comics world independent of their white counterparts.

It’s only been really in the last few decades that black superheroes are getting the recognition that they deserve. Now, you see people fall in love with characters like the Black Panther, Black Lightning and Luke Cage as they are seeing the superhero struggle from the other side: The point of view of the African American.

One thing I always noticed about the larger known superheroes is that despite them saving the world, you never saw them in ‘the ‘hood’, which arguably they would be needed more. You never saw Superman in Compton or Batman in Atlanta. Meanwhile, Black Lightning had Suicide Slum, Luke Cage had Harlem and Black Panther has Wakanda. The common theme of the black superhero is that the ‘hood comes first.

A fantastic article by Monique Jones entitled ‘The Necessity, and Painful Limitations, of Luke Cage and Black Lightning’  gives some reasoning about the community mindedness of the black superhero.:

“The answer lies in America itself. For too long, America has been a divided country, with black Americans deemed unimportant and low-rung next to white Americans. Because of that segregation, we have historically looked out for each other, since no one else would help us. Interestingly enough, the same racial and social politics of our country has bled into comics, whether people realize it or not. Too often, black superheroes are called in out of necessity, not choice. Their neighborhoods are overrun with crime and lawlessness, and the other superheroes aren’t going to help. Therefore, it’s up to black superheroes to take the reins and act as their neighborhood’s regulator” (Jones, 2018).

I’m going to praise those black heroes that put themselves on the line not only for the ‘hood but for humanity. Even more so, I praise the fact that we are seeing that in real life right now with the many protesters out there enduring gas bombs, pepper spray and paint balls to stand up for equality for all men in the face of oppression. This series of articles is going to illustrate a few of my personal favorites black superheroes and what they mean not only to me what two generations and generations of people.