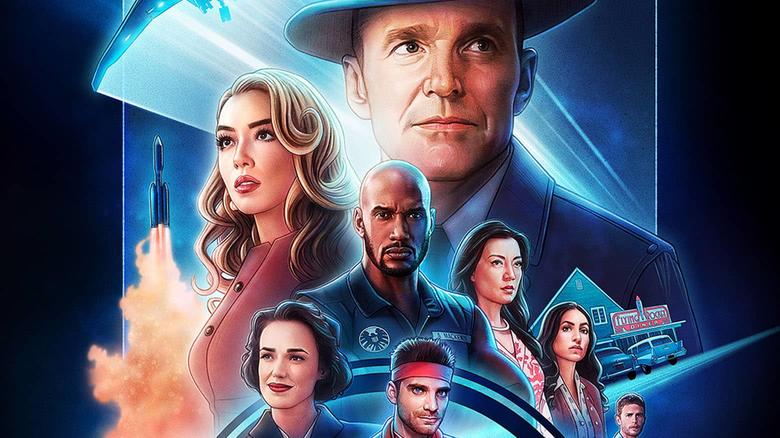 The opening episode of Season 7 — “The New Deal’ — sees the return of Agent Coulson (Clark Gregg). While a bit of a red herring, Coulson is actually an LMD installed with his last consciousness update from the Framework story line. Our team goes back in time to New York, 1931 to stop the Chronicoms from taking over the Earth.

Agents of S.H.I.E.L.D finishes off the final season premiere with a big cliffhanger, and its connection to the formation of the crew and their greatest enemy. With that said let me say; warning spoilers ahead…

The episode opens with the Chronicoms taking the faces, literally, of three police officers in order to infiltrate a party later on, held by Franklin D Roosevelt (Joseph Culp). He was not the President at this point in time, but as Coulson points out, Roosevelt will eventually go on to form the Strategic Scientific Reserve (SSR) which would become SHIELD. The team follows then to the scene as police are investigating. Oddly this season seems to be missing Fitz at this point; Jemma makes not that due to the info he has, anyone knowing where he is a risk for total failure. Will we see him return? Time will see.

Coulson and Alphonso “Mack” Mackenzie (Henry Simmons) have a meaningful scene where Mack warns the new Coulson that.. when the mission is done, he’s going back in his box. Mack and Quake (Chloe Bennet) are struggling with their own beliefs. The fact that Coulson didn’t want to be saved and be at peace weighs heavy on Quake. Mack, on the other hand, seems cold and believes the LMD project was an abomination. The moral dilemma is felt though-out the episode and seems to be a season wide feeling.

The newly formed tag team, Coulson and Mack assume that the Chronicoms want to be at the party to assassinate Roosevelt, potentially threatening the very existence of S.H.I.E.L.D., so they go to the party with Quake and Deke (Jeff Ward) to stop that happening. It turns out that they had the wrong target. The Chronicoms weren’t there to kill Roosevelt; their target was a seemingly unimportant barman called Freddy (Darren Barnet).

S.H.I.E.L.D. manages to stop the Chronicoms from killing Freddy, before heading back to the speakeasy where he works to find out who he is from the bar’s owner, eventual SSR agent Ernest Hazard Koenig (Patton Oswald). This Koenig is not as nice as the other Koenig relatives who all work for S.H.I.E.L.D. in the future, but he does tell them what they need to know. Freddy is actually Wilfred Malick, the father of Gideon Malick who becomes the head of HYDRA. If the Chronicoms kill Malick, then HYDRA’s stamped out before it ever takes hold and S.H.I.E.L.D. is never formed.

The cat ‘n mouse battle between the team and the Cronicoms comes with its usual shoot-out, action scenes in all its budgeted glory. The likeliness that the final season will take place in the prohibition era is a bit underwhelming, though they do stay true to the fact that this time in history has its social plight. Mack gets the usual person of color looks, while Quake gets talked down to for being a woman. Both characters stand their ground with witty writing that gets the point across while maintaining the family friendly feel.

This episode places the choices of morality vs. the greater good for all, front and center. Will this be a season wide theme? The episode ends on the decision that in order to save the world, they must save hydra, for now at least. 3/5 Bibles.